On the way to cycle the 2014 Maratona dles Dolomites, we stopped for a night in the beautiful vineyard-surrounded village of Caldaro – near Bolzano.

Caldaro has a lovely car-free square full of restaurants. It is a perfect stop-over village.

It was late on a hot afternoon, and I had no plans to cycle. But I had seen Passo della Mendola signs and so I asked at the hotel reception where the pass was.

The friendly lady at the check-in desk pointed straight above the hotel. Ten minutes later I was on my bike!

What a great way to eliminate the stress after hours in a car. 🙂

This is a pleasant, well engineered, 14 kilometre climb. With a very steady 7% grade. As I rode, it was mainly in the early evening shade, and I struggled to take any good photos, but the views are great and plenty of signed hairpins – and a nice cliff stretch.

There were lots of cyclists heading up, but also quite a bit of traffic. But it’s a wide road, so no worries. 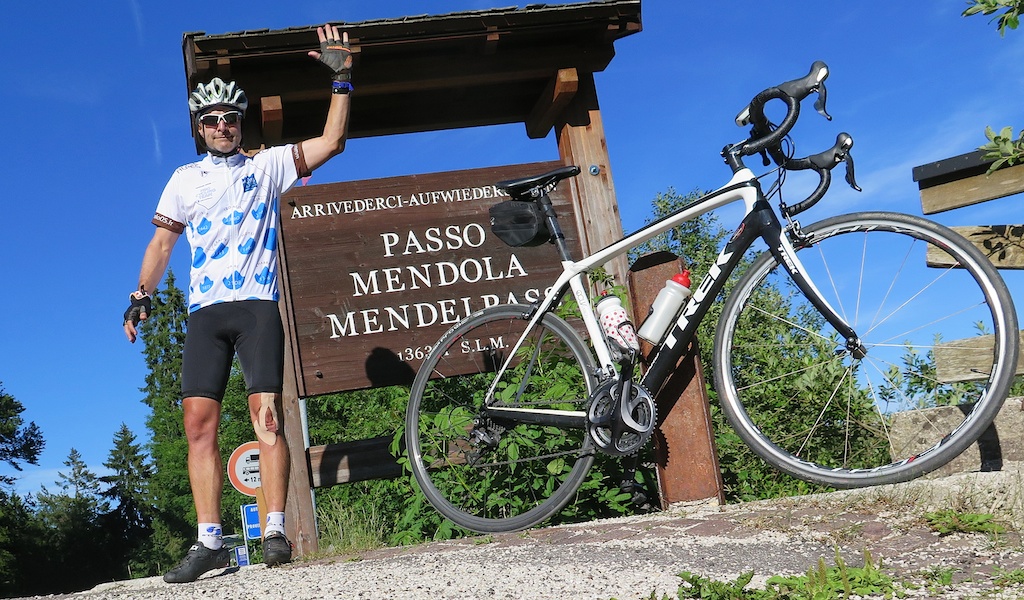 I don’t know much (ok, I don’t know anything) about this area. Between Stelvio/Gavia/Mortirolo and the Sella Ronda. But the ride was an unexpected surprise. And there was just no way I could sleep with an unridden passo directly above my hotel

I gave this a low score. It deserves a little better. It is a good "through" pass for cyclo-tourists.