The penultimate stage of the 2012 Giro will feature the highest mountain top finish in European GT history atop Passo dello Stelvio. Perhaps the greatest cycling climb in Europe. Especially for those that like hairpins.

1. A brief history of the pass.
2. A description of the three routes up.
3. Stelvio in the Giro.
4. Miscellaneous Stelvio facts.

At 2757 metres (9045) feet, the Stelvio is the 5th highest paved road in Europe and 2nd highest paved mountain pass. In Italian, its full name is Passo dello Stelvio. Its German name is Stilfser Joch (its eastern side descends into the Italian but very germanic region of South Tyrol).

The pass is perched high in the Southern Limestone Alps, almost touching the Swiss border. It is surrounded by high mountains, including the towering Ortler (fondly called König Ortler) at 3905 metres.

There are signs that humans have been crossing the Stelvio since the bronze age, however the first road was not built until the early 19th century.

Following the Napoleanic wars, the Congress of Vienna (1815) redrew the political map of Europe. The Austrian- Hapsburg empire received Lombardy as compensation for losing the Austrian Netherlands. A road over the Stelvio was seen as a way to improve communications between the new province of Lombardy and Austria via Tyrol .

The renowned engineer Carlo Donegani designed and led the building of this engineering marvel. Construction began in 1820, taking five years and more than two thousand builders to complete. The Emperor Ferdinand was on hand at its opening and was so pleased that he would later grant Donegani the title “Nobleman of the Stelvio.” – nice!

Today at the summit can be found the Carlo Donegani Museum. Well worth a visit for a history of the road: its construction, its WW1 battles, and its place in Giro history. It’s located next to the Banca Popolare di Sondrio branch – perhaps the highest bank branch in the world Italy.

After Italian unification in the 1860’s, Stelvio became part of the border between Italy and the Austrian empire. During World War One – as part of The White War, a small battle was fought at the summit.

After World War 1, South Tyrol became part of Italy and thus today the pass is Italian on both sides.

a. The Famous Side – east

Stelvio is probably best known by many just as that road with the endless hairpins all visible in the same view. The 2012 Giro will not climb this better known eastern route although it’s the side most often used in the Giro. Starting in Prato Allo Stelvio, with approximately 60 hairpins (the last 48 sign-posted), this monster climb is perhaps as fun as it gets for a cyclotourist.

For a profile, map, and photos see here. 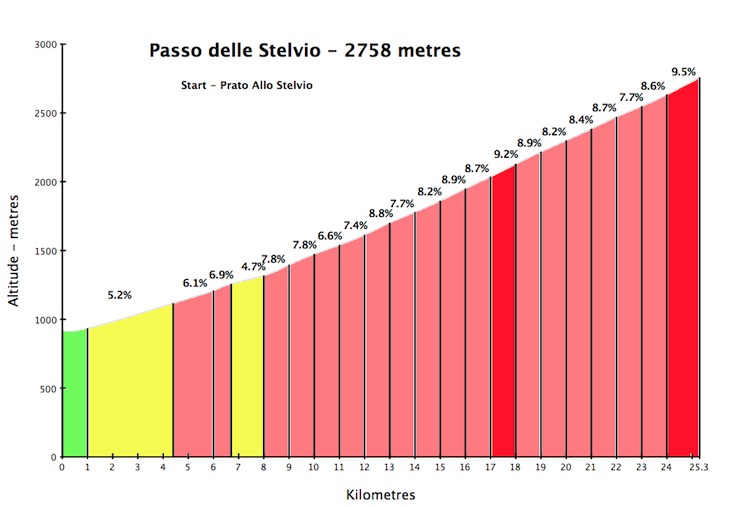 b. The Lessor Known Swiss Side

Yes, apart from the two Italian routes, there is a lessor known “third” road up to Stelvio almost entirely in Switzerland that leads to Stelvio via the highest paved mountain pass in Switzerland. At 2501 metres, the Umbrail Pass is just a few metres from the Italian border. At Umbrail, the road joins the western Italian route (discussed below) roughly 3 kilometers below the summit.

For a profile, map, and photos of Umbrail Pass see here.

Photo: The Umbrail pass is the highest paved pass in Switzerand. Beautiful and unbelievably quiet. 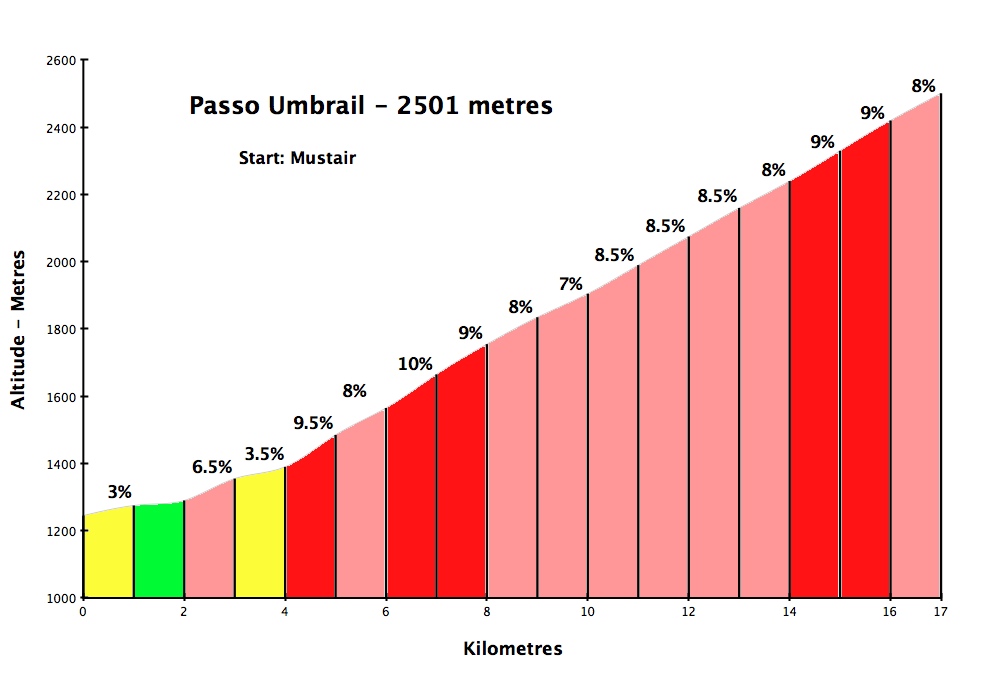 c. The west side – start Bormio

This is the side that the 2012 Giro wil climb so I’ll spend a little more time here. It’s a little easier than the famous side, but at 21.5 kilometers and 1550 metres of ascent, it’s still a (beautiful) monster. And the toughest stretch is the last three kilometers.

This side “only” has 40 hairpins. They are all sign-posted with the majority during a superb middle stretch and then nearing the summit.

Photo: Only 26 more hairpins to go.

About 6 kms from Bormio, there is a long straight stretch along the edge of a steep mountain. Due to avalanches, there are a series of 5 tightly-bunched, roughly cut tunnels. None too long, but sometimes dark and occasionally very narrow.

Photo: View from above the tunnels.

Next is a long straight-ish stretch that is less steep through an alpine valley heading towards Passo Umbrail. As the road passes Umbrail, the last 3 kilometers – in rarefied air – is the toughest stretch of the climb.

At the top? Summer skiing, a million souvenir stores, restaurants, a Tibetan retreat (!), and views to die for. It is easily the most developed high pass I have ever visited.

Profile of Bormio side: 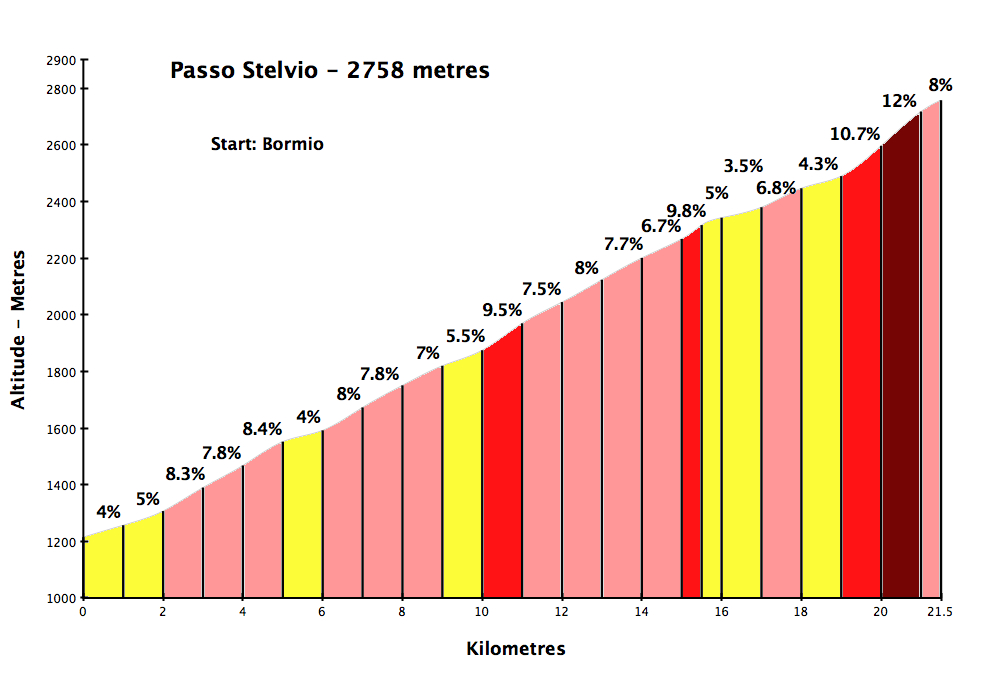 3. Stelvio in the Giro

In this quick overview I’ll only link to some photos as I don’t have user permissions. Most are small, but all are worth clicking. If you have links to fun Giro/Stelvio photos please add the links in the comments.

The one take-away from the photos below: they used to race in crazy snow conditions that would easily get a stage cancelled today.

Stelvio’s first Giro appearance was 1953. The legendary Italian Fausto Coppi attacked the Pink Jersey holder the Swiss Hugo Koblet 11 kms from the summit to take the stage and ultimately the entire Giro. Coppi on Stelvio.

1956 was the first Stelvio ascent from the Bormio side with Aurelio del Rio first over the top. Charly Gaul.

A great photo of the 1965 Stelvio ascent. Helpers had to shovel snow clear on parts of the road for the cyclists. And another photo. And another.

In 1972, José Manuel Fuente was first over the Bormio side of Stelvio, but the great Eddie Merckx would go on to win the Giro.

Lots of snow on the final hairpins of the east side during the 1975 Giro.

In 1980, the Badger, Bernard Hinault on his way to winning the Giro was first over the east side. Descending to the finish in Bormio he famously called his domestique Jean-Réné Bernadeau a fool for not using his brakes through the tunnels. Another photo.

1984. Polemica! Giro organizers claimed that Stelvio was impassable and changed the route. Laurent Fignon screamed foul and said the cancellation was to protect Italian Francesco Moser and prevent Fignon from winning the title. He claimed the route was ride-able (and snowless photos seemed to support his claim). But Moser would win the race.

In 1994, Giro winner Marco Pantani was first over Stelvio winning the stage with a staggering performance on Mortirolo.

The Stelvio’s last Giro appearance in 2005 saw an ill Ivan Basso lose 42 minutes climbing the east side, ending his title hopes. A photo of the last few hairpins.

All Photos by Will and Courtesy of Moo Productions