Trending
You are at:Home»Alps»Ski Touring 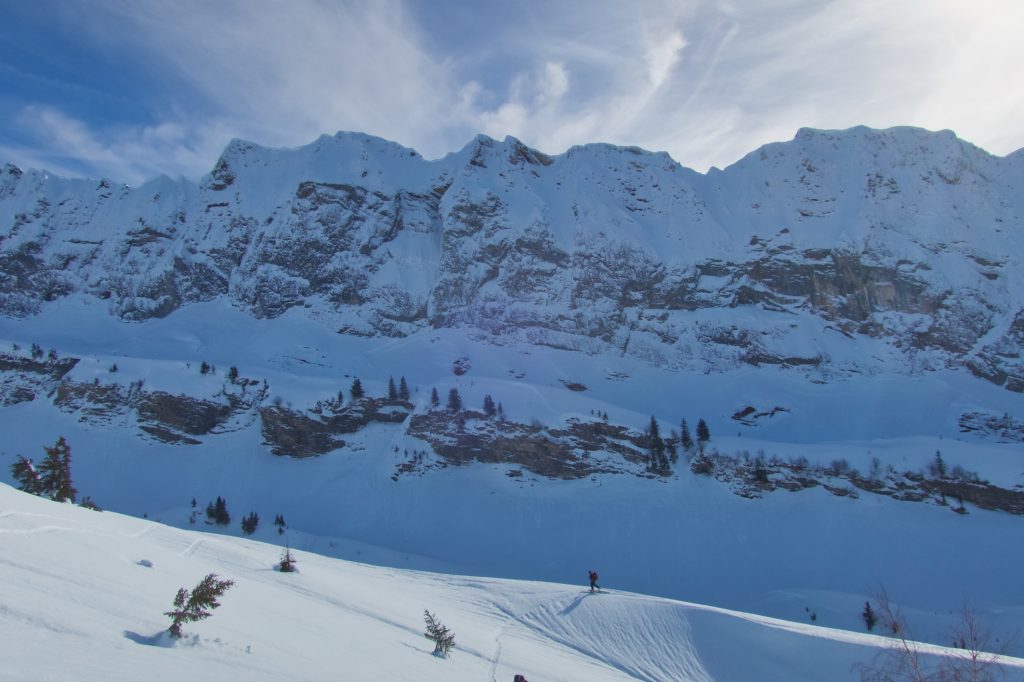 If you read this website, you know my favourite hobby is cycling slowly up mountains. So ski-touring has always seemed a sport designed for me: Slowly walking up mountains on skis with special skins attached, then taking the skins off and skiing down. The only flaw? I am a mediocre skier and was scared of the downhill part: off-piste, back-country skiing.

But this summer, two Steel Wheeler friends, Alfie and Richard, convinced me that I should give it a try. And they kindly offered to “show me the ropes.” Woohooo! 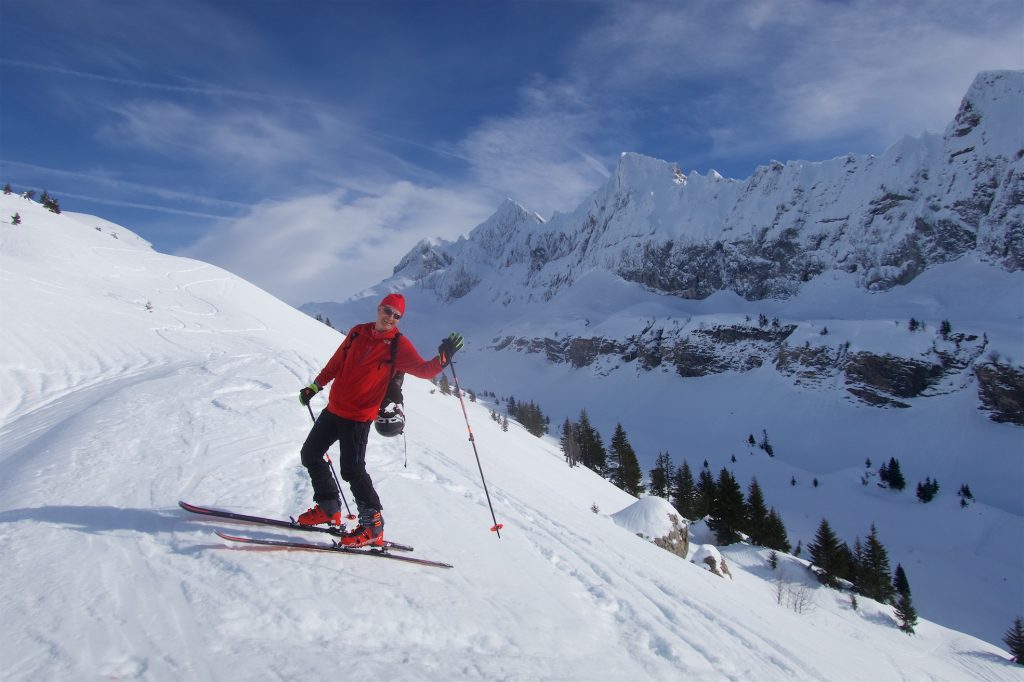 On both of these outings, Alfie supplied with me safety equipment in case of avalanche: a shovel, a find-a-person pole and an electronic beeping thingy (the technical term). They – both days – patiently gave me a bunch of useful lessons: how to adjust/wear the skis, how to put on skins, how to change directions on steep slopes, etc, etc. Very kind, and very necessary help. Much appreciated.

Les Grandes Platières is the summit at the top of Flaine ski station. We climbed this just before the ski station opened. But it was a safe place for a debut as the downhill part of the ride would be on (ungroomed) ski slopes. 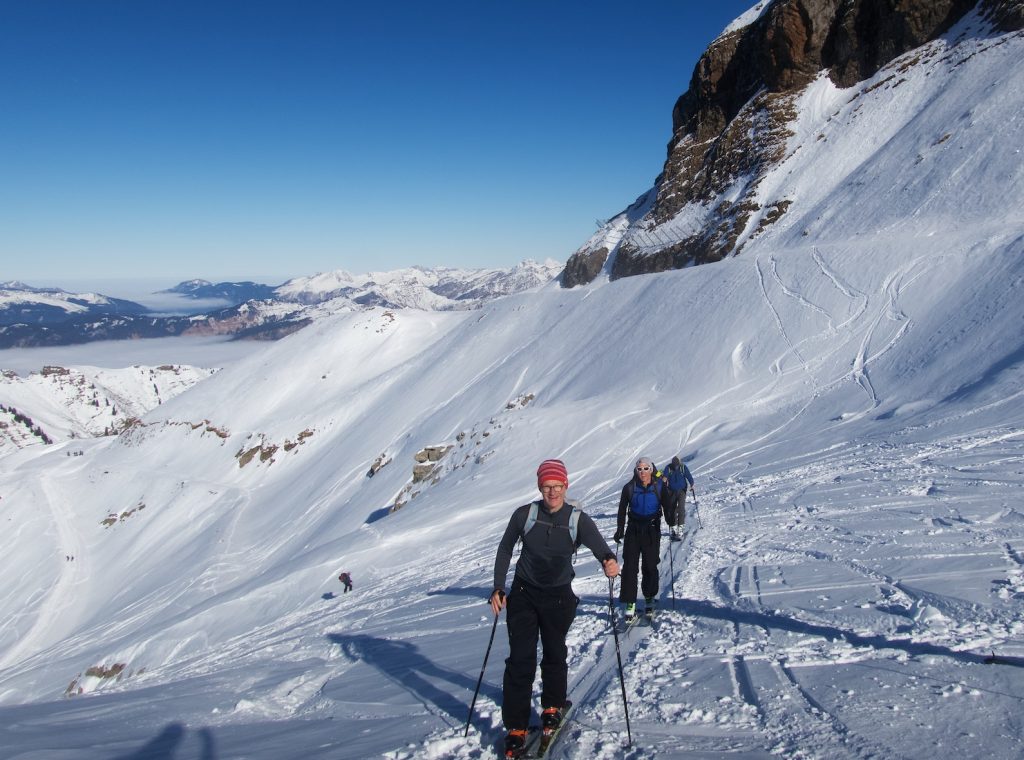 It was one of those glorious Alps days where civilisation is under the clouds …. and the only way to find the sun is to get high. 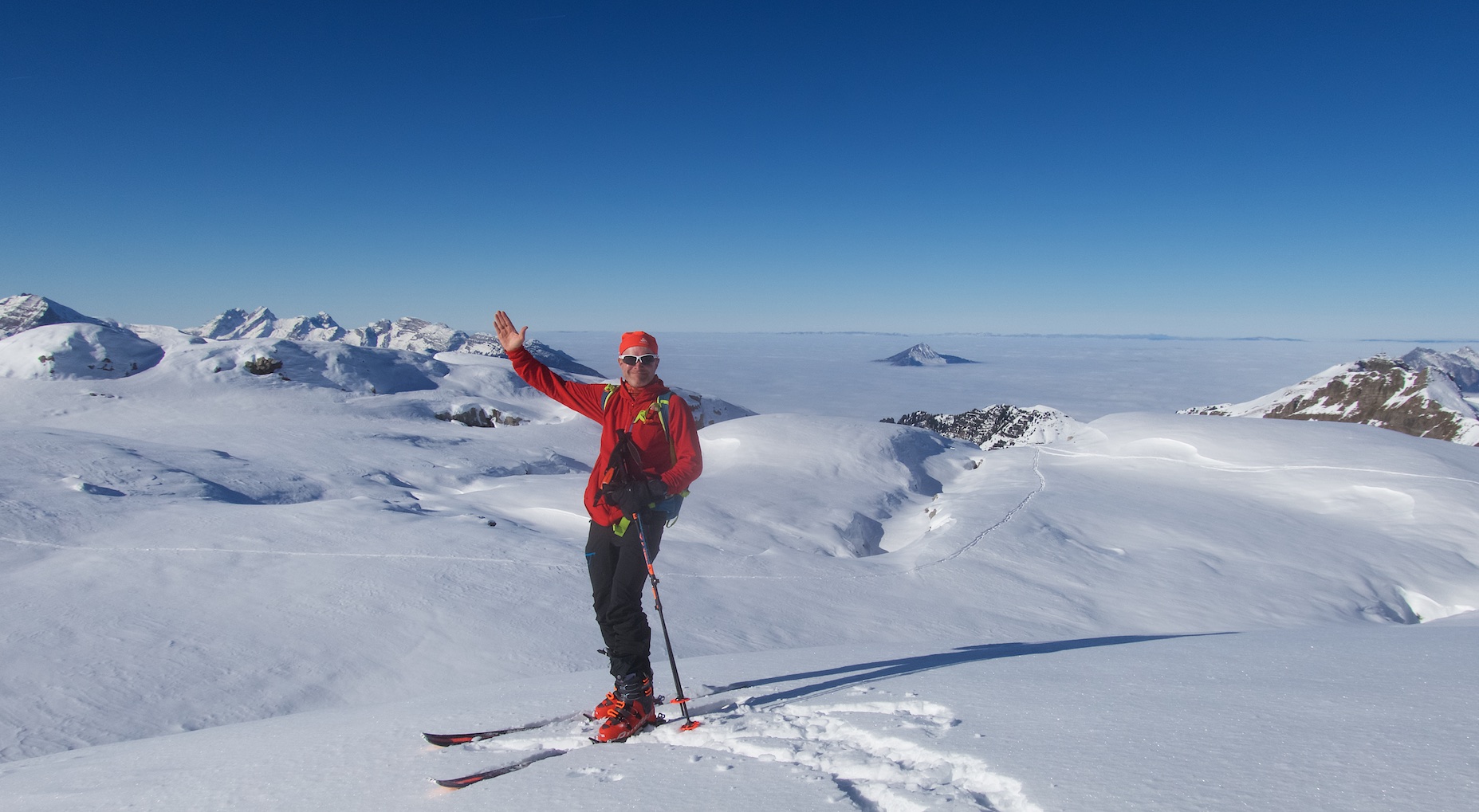 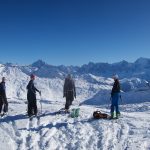 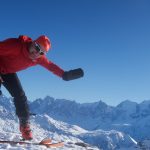 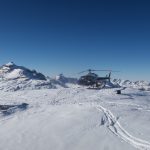 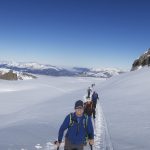 The summit is 2480 metres with breath-taking views of Mont Blanc. This is a cycling blog – and yes – it’s possible to reach the summit on a mountain bike. See here for map/details.

My second outing was a little (not a lot) more back-country. Starting from Les Allamands, just above Samoëns, we enjoyed a fantastic climb to Pas de la Latte (2206 metres) via Refuge de Bostan (17676m).

It’s a beautiful route, first several kilometres up through the woods, then in the open, alongside a high mountain ridge. It took some time to reach the sun. 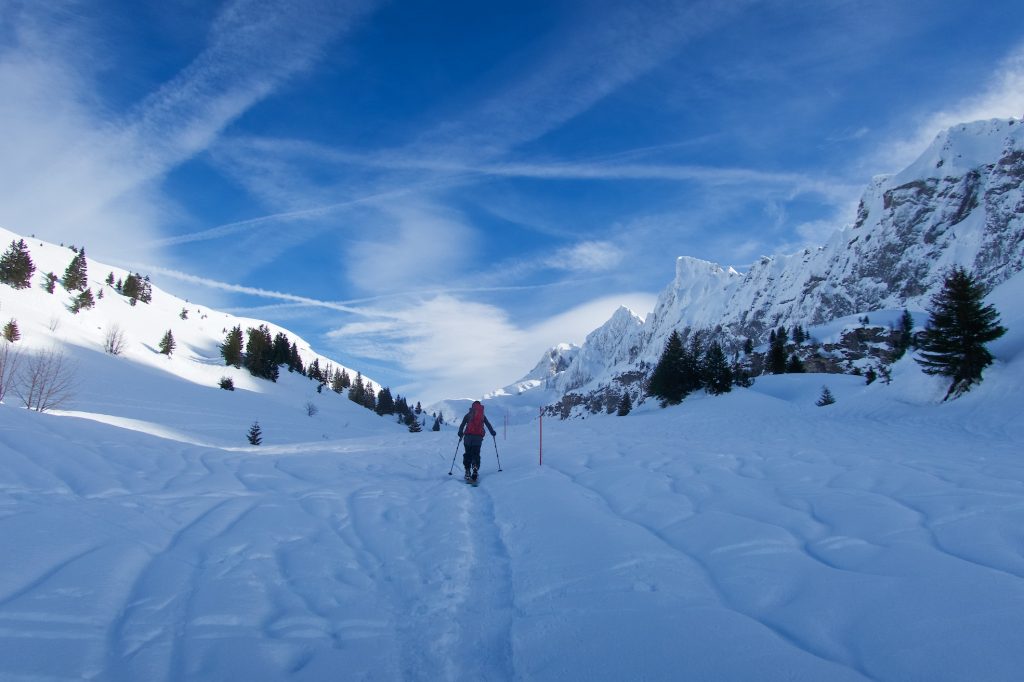 We were passed by a group of guys on electric bikes with fat tires. Lazy bums, but they were having fun: 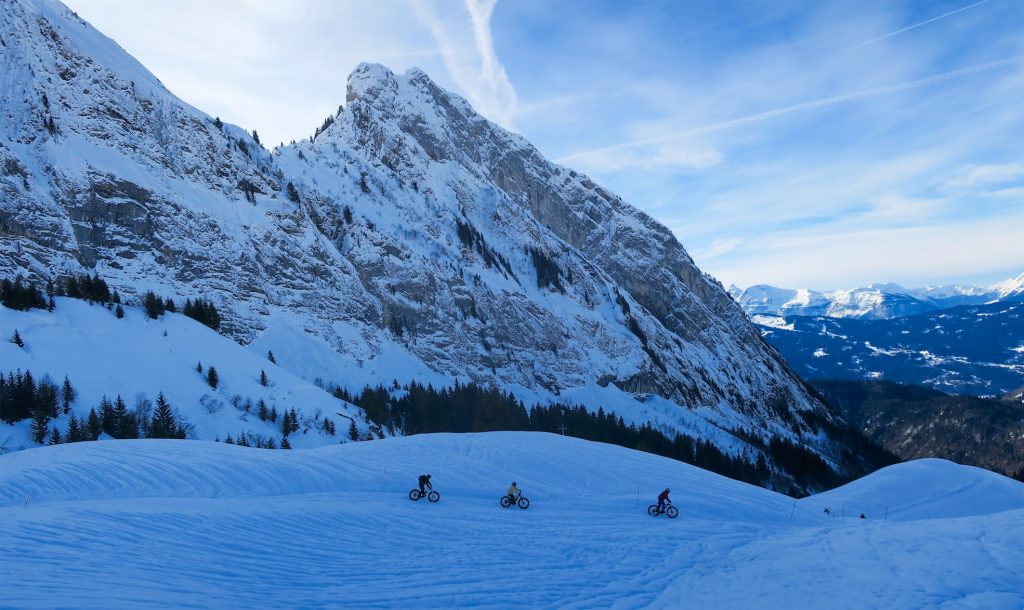 I must admit I was nervous the entire way up — as I wasn’t certain I’d be able to ski down. The snow was icy/crusty after high altitude rain a few day before. But so beautiful. 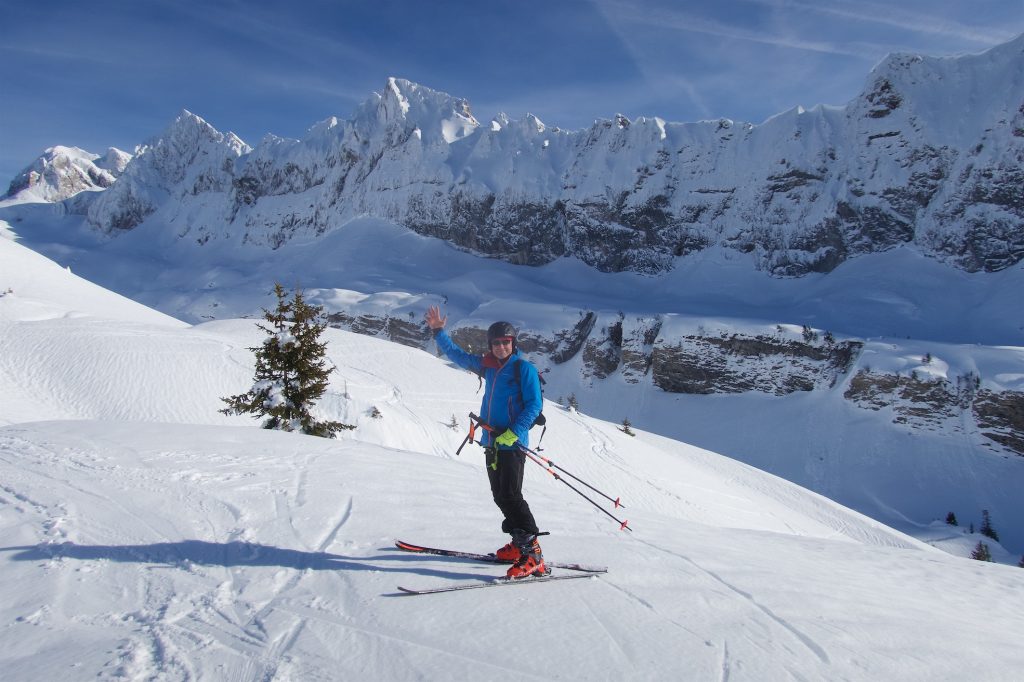 The boys took great care of me. I avoided any problems on the way up. 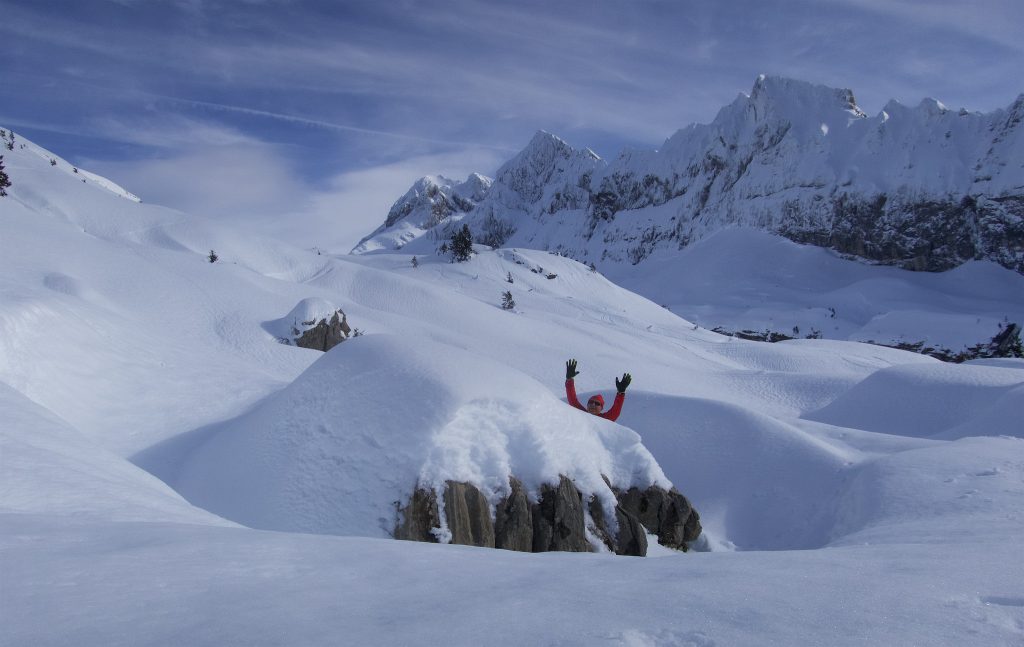 Just before the col, there was a small traverse, with a steep fall to the right. Most people wouldn’t have been remotely nervous here – one could even ski down this steep stretch – but I froze halfway across.

Richard was behind me and I told him I was turning around. Then I told him I was too scared to turn around. We stared at each other briefly and he did the perfect thing and started laughing (me too). I continued across and — after requiring help from everyone — figured out how to properly buckle my boots for the descent.

Erik brought along Viking … a very happy dog. Who enjoyed the descent even more than the climb. 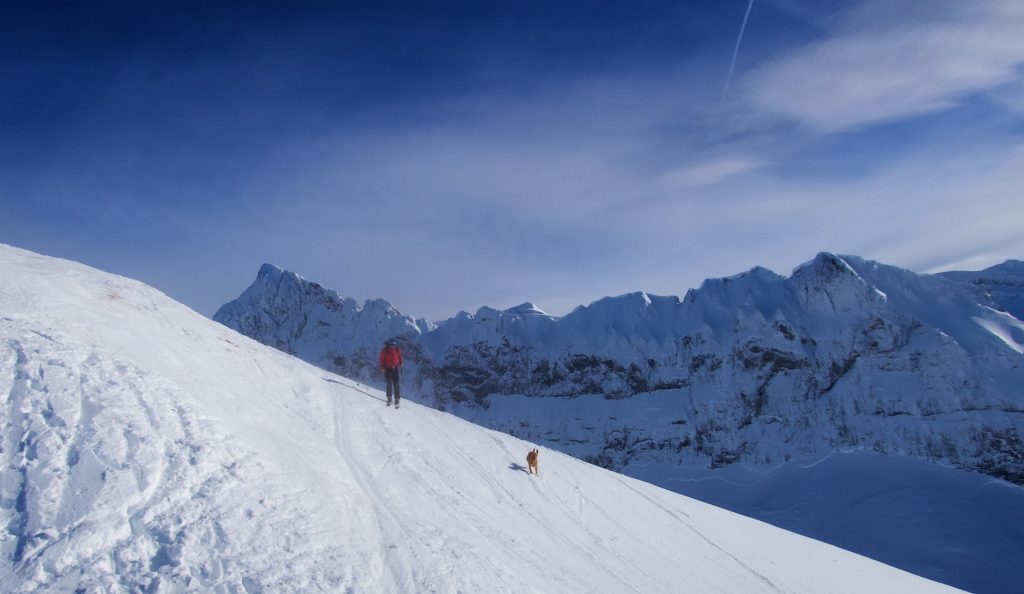 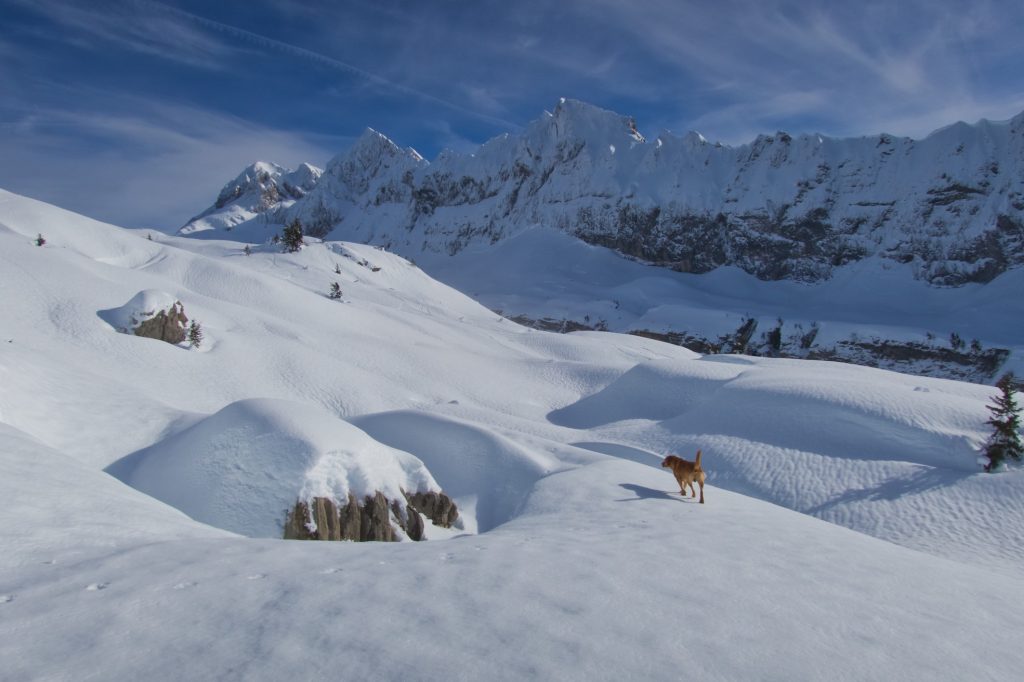 I took very few photos going down … as I was terrified. But for much of the descent, the surface snow had melted a little, and it was ultimately not too difficult. So even I survived … with a couple of graceful minor falls.

The lower kilometres through the trees was trickier for me. I snowploughed the entire way. Tired thighs! But we all made it back down very pleased with ourselves. Especially Viking. 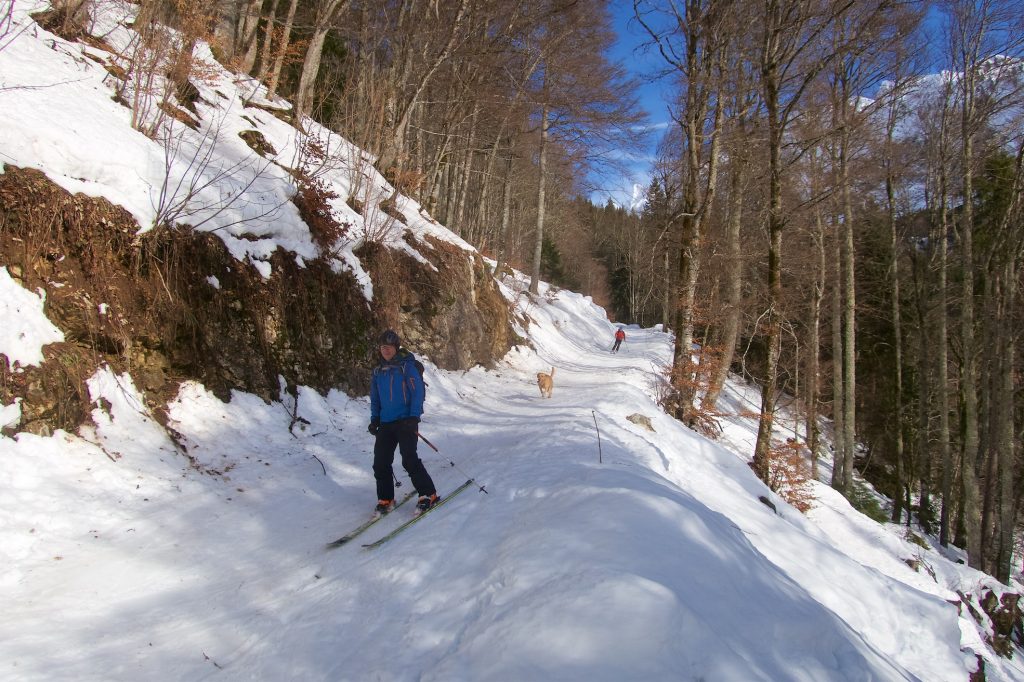 I’ve mountain biked near here before. Starting from Samoëns and taking the same road to Les Allamands, but then riding into a parallel valley to Col de la Golèse,
looping down to Morzine and returning via Col de Joux Plane. Details here.

I love this sport. I only wish I was a better skier and less of a wimp. But hopefully, I’ll get out a few more times this year. Huge thanks again to Alfie and Richard for their patience, and for inviting me along.