As usual we started near the back. It’s a fun start as some old guy sings a slow, atmospheric old Gruyere folk song while everyone crosses the start line (seriously). 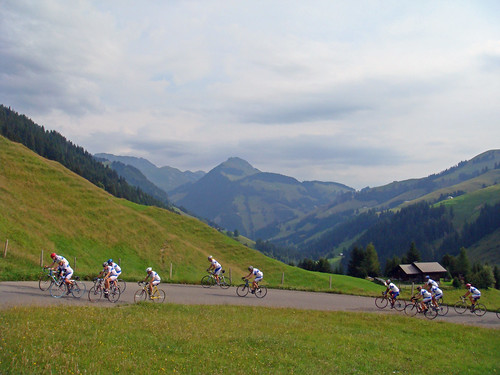 With 2000 riders the beginning is a challenge as we went through about 8 roundabouts (downhill) to start – with police with whistles and waving flags à la Tour de France. Almost immediately the work starts as the Route heads towards the Jaun Pass – and climbs much of it before turning up a perfectly surfaced tiny forest road towards Mittelberg.

This climb is steep and with the huge crowd it was often complicated to pass people.

The descent down to Gstaad is hair-raising with several crazy hairpins through the woods. Half way down, several officials warned us to slow and around the corner, on a very steep stretch was a section of gravel. There were quite a few crashes throughout the day – Martin witnessed one.

Disaster:
And a rider in front of Barry fell and took Barry with him. Serious road rash – more on this later. And guess who helped him up? Mr Cancellera himself.

The Swiss World Champion and Olympic Medalist was participating (not racing) in the event – pretty cool.

Me? Far behind Barry and Fabian, I actually skidded a little on that section – I am usually braking when I descend – but I survived.

Feeling pretty good, I worked hard today and really enjoyed the route. I knocked 27 minutes off my last year time – so I was pretty pleased.

At the finish – I met Barry and translated for the First Aid guys. They informed us that he needed to go to the hospital to remove embedded gravel. Ouch. Before leaving, I, of course, snuck into the VIP section to get a photo of Cancellera. 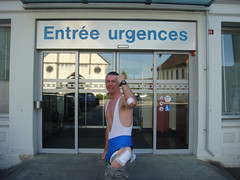 KUDOs to Barry for finishing the course after his crash with a time a little over four hours. Unfortunately, this was almost the exact time we spent waiting at the hospital for him to be treated.