After a great week in Flanders cycling with Podium Cafe friends, the final ride of the trip was in France: Saturday’s Paris-Roubaix Challenge. I chose the 145 km event which included 19 of the cobbled sectors from the Pro race, including the three 5 star sectors: Trouée d’Arenberg, Mons-en-Pévèle, and Carrefour de l’Arbe.

Some Bucket List items should only be done once. Cycling the Roubaix cobbles was an amazing experience that I have absolutely ZERO interest in ever trying again. 🙂

I received a nice sticker for my bike warning me of all the cobbled sectors and feed stations along the route. As I put my race number and the sticker on my bike, two classy English gentlemen with Sky kit smoked cigarettes and blew smoke in my face. I was already having fun.

I cycled the Tour of Flanders Sportive last week. So – you might ask – what is the difference between the two routes? First, West Flanders is much hillier than the French countryside around Roubaix. The two events were the same length but the Flanders sportive had four times the ascent. Thus today, on the smooth stretches, was a day to sit in a group and wheel suck. In fact, with roughly 142 kms to go, I decided I would no longer take a turn at the front of any group. I laughed at many elbow flicks.

Me wheel sucking in the early morning fog:

The second question often asked: are the Paris-Roubaix cobbles worse than the Flanders cobbles? . Fuck yes, they are worse. Far worse. They are truly awful! But it’s also a different riding experience. Most of the Flanders Cobbles are climbs. For me at least, they are tackled slowly. Roubaix cobbles are long, flat stretches attacked at speed. Pure hell. 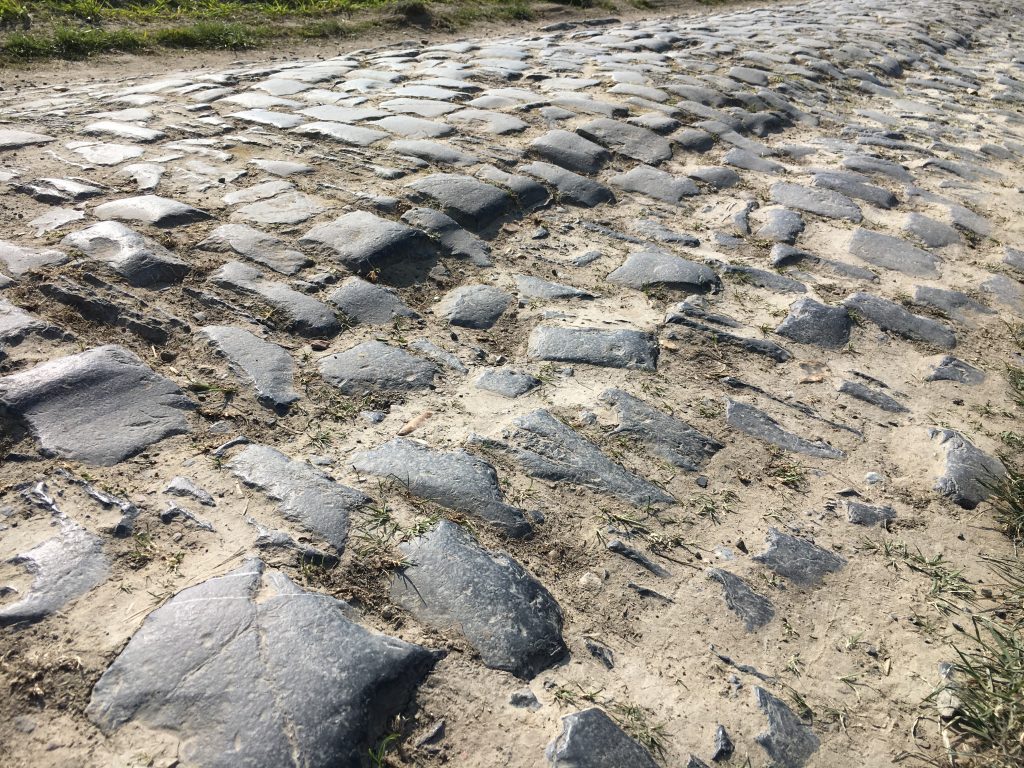 My route was shorter than the pros, initially heading out from Roubaix for 50 paved kilometres and then joining the pro route at Trouée d’Arenberg. Wow, nice way to start the bumpy stuff. While I hated every moment on this horrible road, it is a beautiful setting, full of history. A great experience. Note, the damn race organisers fenced off a smoother option. Me not in first place: 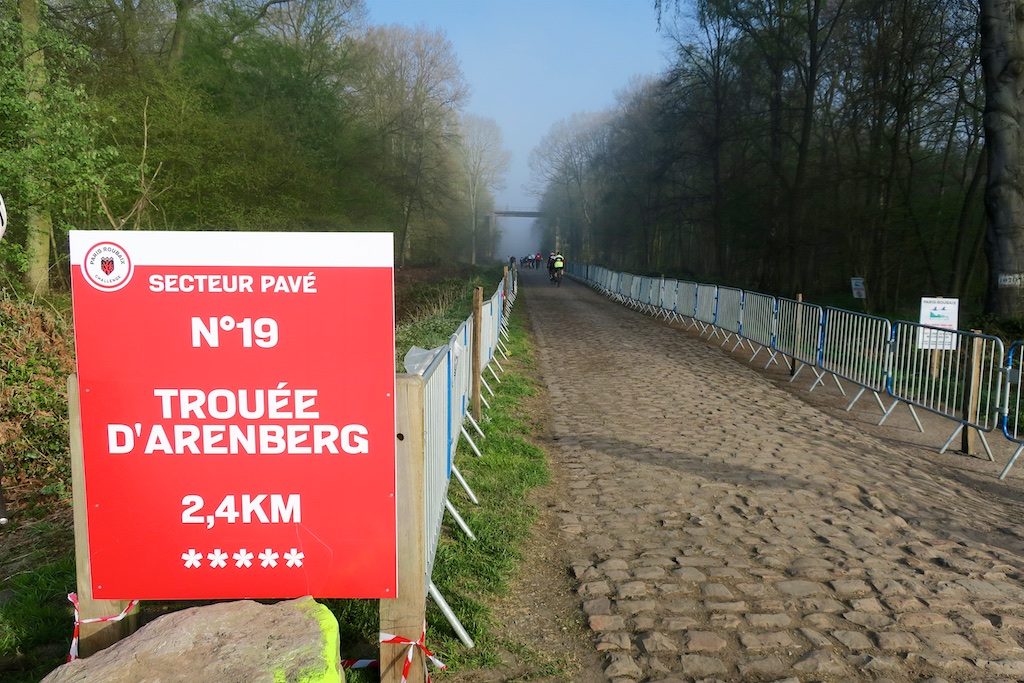 Let me be clear, I HATE RIDING ON COBBLES. IT SUCKS. But, this was still a super fun day. I love my bike for somehow not flatting or collapsing in pain over these two events. I loved all the fans, camped on the route for Sunday, that cheered us on. So many kind people oozing sympathy. And yes, I always high five the children. 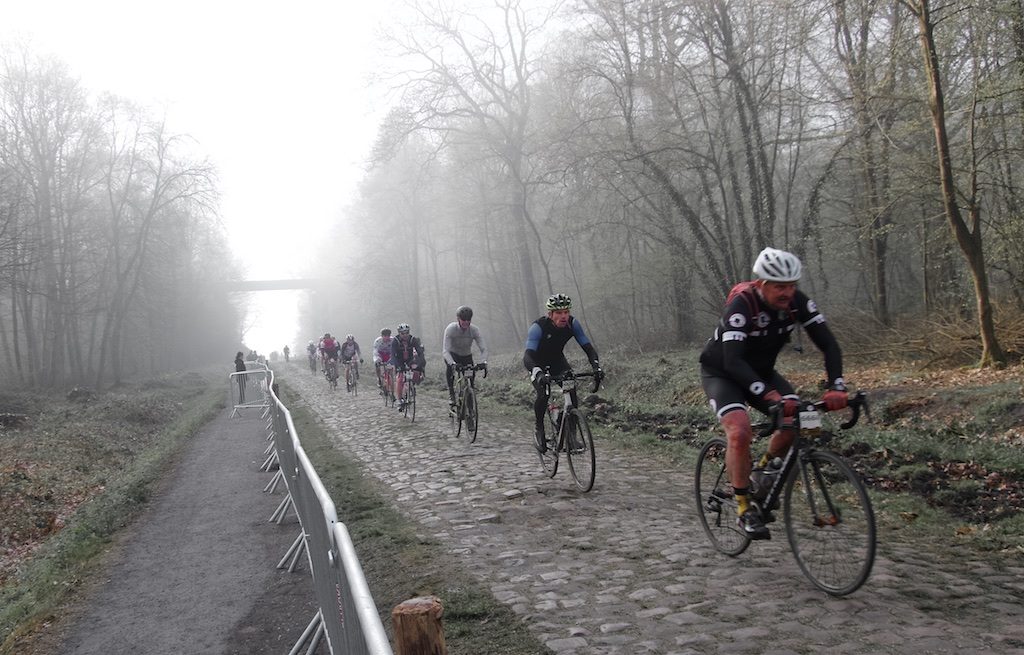 I rode a road bike with 28c tires fully inflated. But there were loads of strong Belgies/Frenchies/Dutchies on mountain bikes. I spent much of the day passing these guys on the pavement and having them fly by me on the cobbles. I felt reasonably strong and passed my fair share of road bikers too but, no joke, I am not sure I passed a single person on the endless cobbles (and yes I searched and used gutters or dirt side paths when possible, but they are few and far between).

Every cobbled sector is rated from 2 to 5 stars. At one point, I became delirious with anger that there were no 1-star sectors on my route. Strangely, for me, the worst sectors were not the three 5-star sectors, but several of the 3-star sectors I found incredibly bumpy and tough. Early on I realised that the sectors were numbered and counting down. I became fixated with how many were left. A couple had paved sections but were soon cobbled again but counted only as one section – I almost despaired. Several were so bumpy my arm warmers slipped down my arms (ok, I have noodles for biceps). 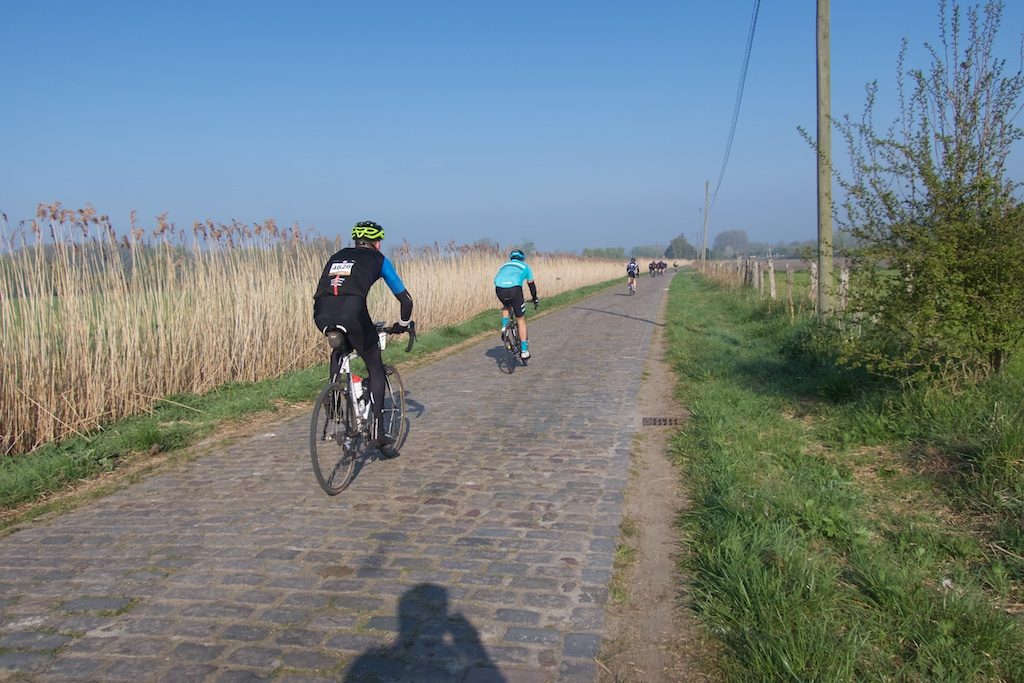 One of the more interesting aspects of the day: early on riders would point out any tiny bump in the road in warning. But after a few sections of cobbles, there could have been a 10-metre deep hole in the road and no one would give a damn. We were hard men and women – we didn’t care what lay ahead.

Each sector has a nice welcome sign with details and a few had electronic timing mats. 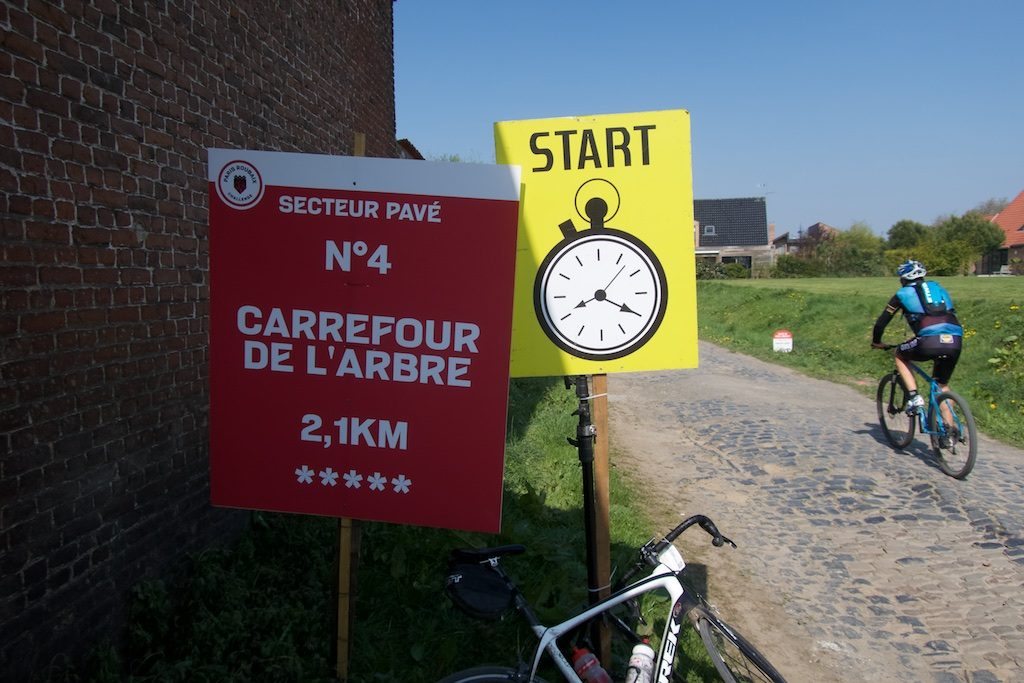 One of the bigger challenges was trying to pull my camera out of my pocket and snap a photo without stopping on the cobbles. I only dropped it twice. Pont Gibus was receiving a fresh paint job as I passed: 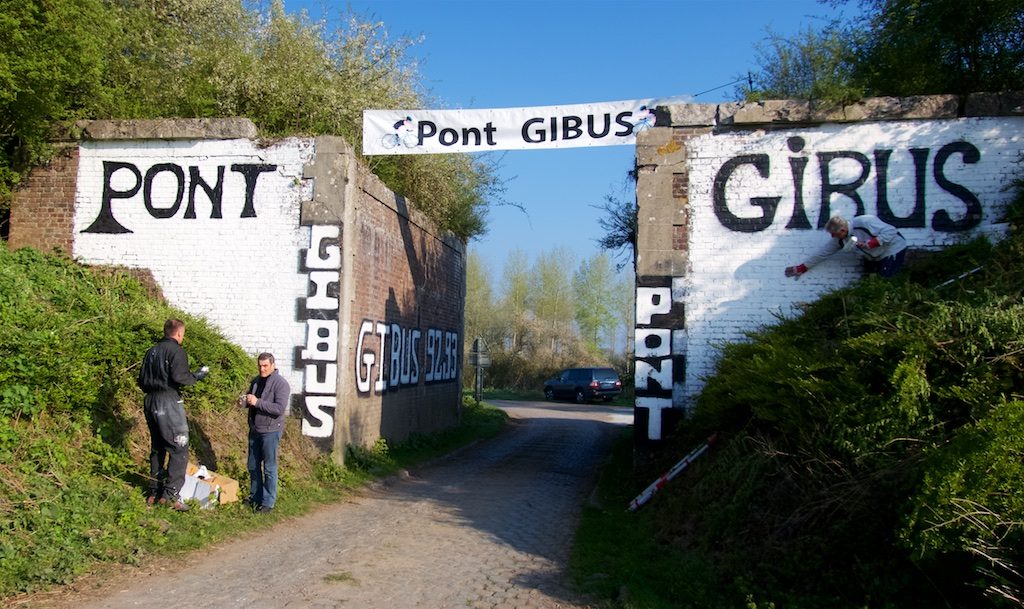 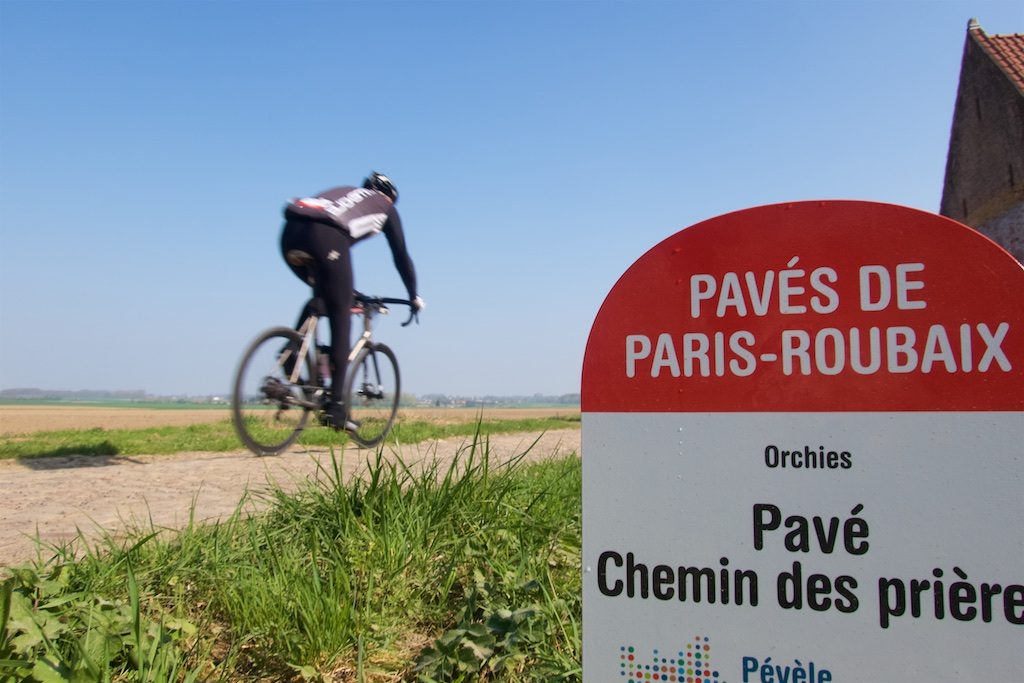 As I became more and more tired the cobbles began to seem larger and larger: 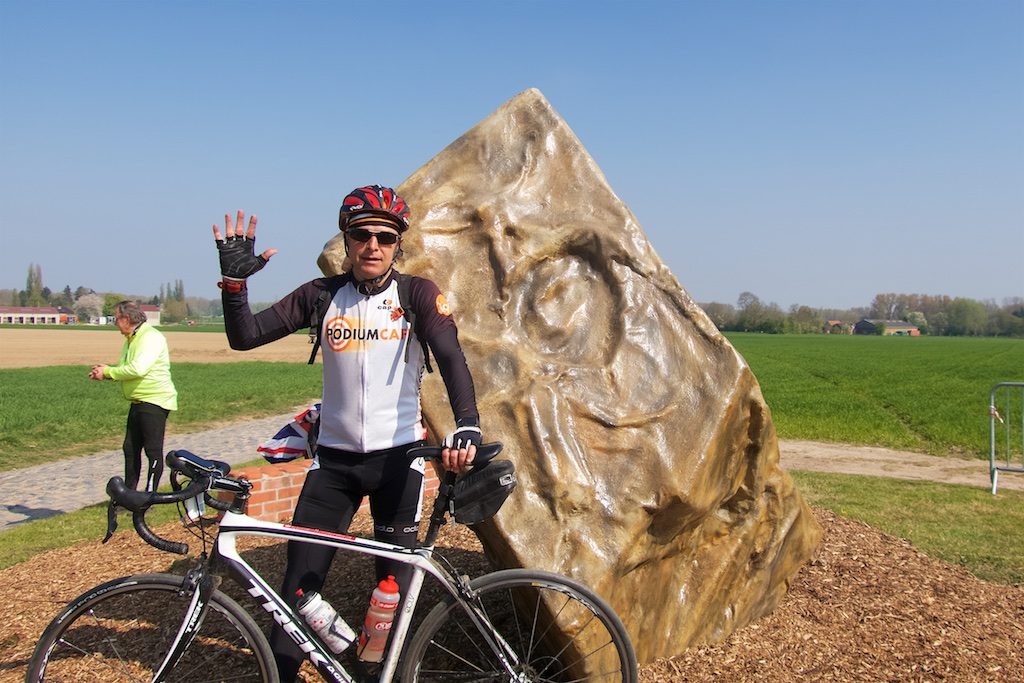 The kilometre markers were suddenly huge:

130 kilometres into the route, my hands ached, my bike was making strange noises, my legs were shaking, and my undercarriage asked me to ride standing up. But then things looked up and I ran into the rest of the Podium Café crew riding a different route. Wooohoooo! We were all in good spirits and we joined up to “race” to the finish.

I sprinted ahead with the goal of taking photos of my friends flying over the next cobbled section when suddenly I saw my Nirvana: Hay Bales. So I jumped over a ditch and ran cross style through a field ….. (cobbles make any surface feel smooth). Below, my pals are cycling past as my tripod/timer went off (yes, I had fun today).

We were making progress, and I learned that we were actually allowed to finish in the legendary Velodrome. The bastards wouldn’t let me use the showers though! Still, 144 kilometres of cobbled misery was worth it for the fun of riding through the Velodrome. Very cool.

We were all thrilled to be finished, and there was much rejoicing: 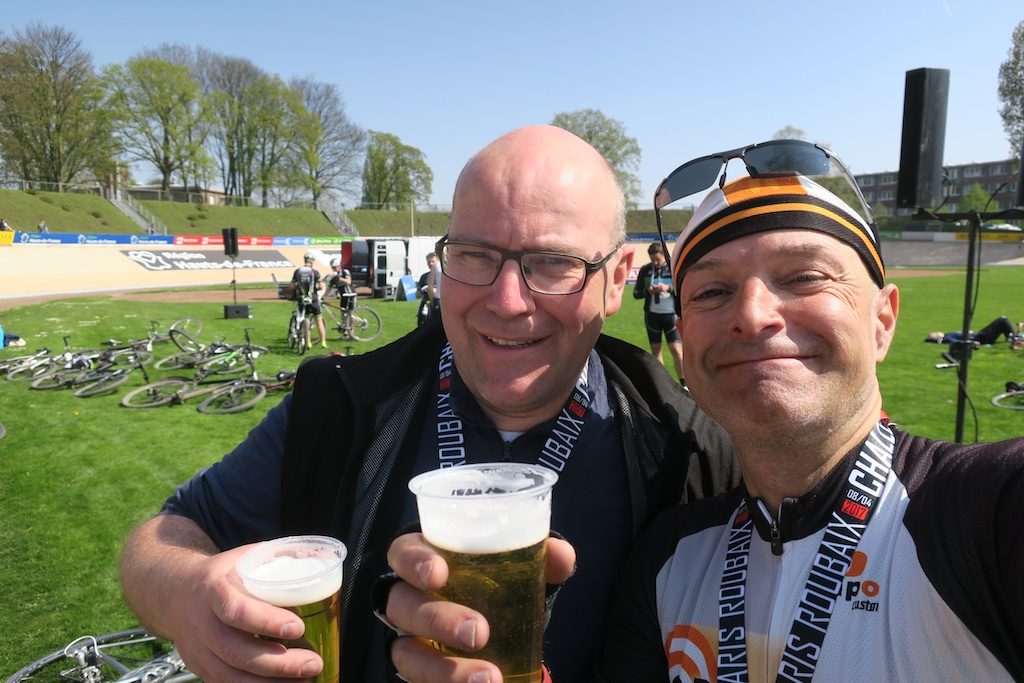 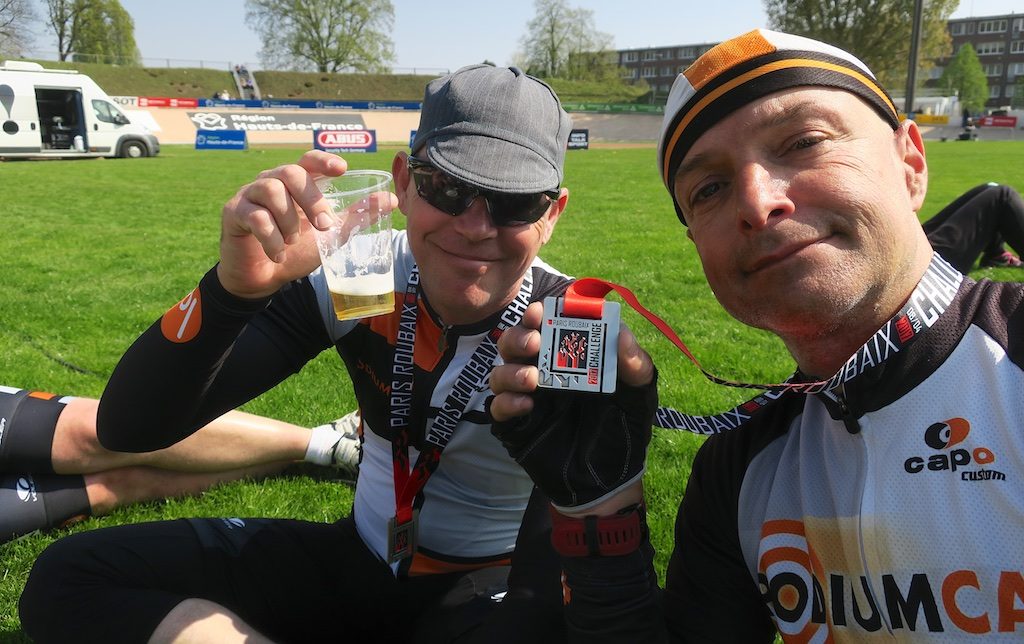 We received participation medals so we all could feel like winners – France is a socialist country. A lovely young lady gave me my medal and I gently grabbed her shoulders and gave her the standard three cheek kisses. The guy with the microphone happily declared that Roubaix finishers received 6 kisses. Nice.

I am tired and drinking beers so I will finish with my favourite random cow photo of the week. Can you guess what I am doing tomorrow? 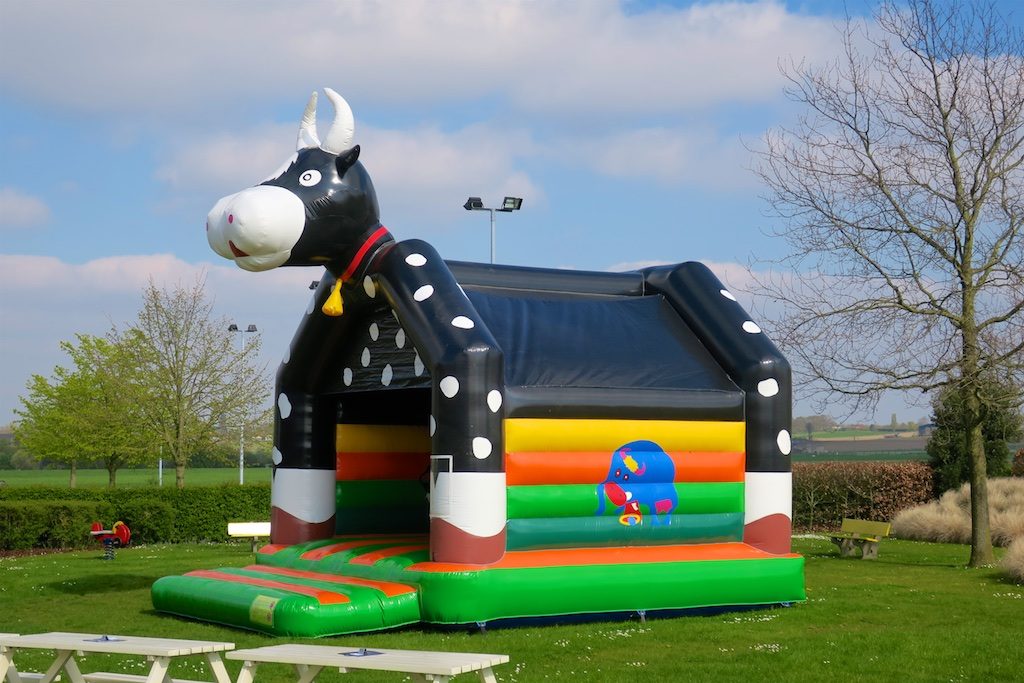