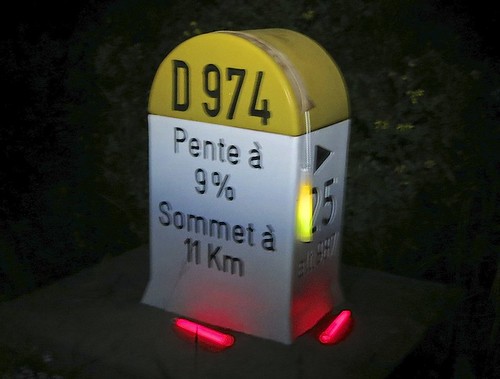 This weekend Ricardo Ricco, the “Boys from St Etienne,” and I participated in the Ventoux Night Session.

Limited to just a few hundred entrants, the basic idea is to cycle up Mont Ventoux in different groups based on speed – so that everyone reaches the top at roughly the same time – to see the sunrise.

I know you are sick of us euro-lycra-louts complaining about the weather, but the forecast was abysmal, and I doubted things would go well.

To start, we met up Saturday afternoon for a fantastic 76 kilometer loop through Les Gorges de la Nesque – part of the Réserve du Biosphère du Mont Ventoux. If you ever visit the region, this 20 kilometre never-remotely-steep (averages less than 3%) cliff road passes through a sort of mini grand canyon – amazing place. More details.

For details of all three side of Mont Ventoux — profiles, maps, etc. — see here.

After the evening pasta party we all attempted to fall asleep for a brief nap fully expecting to wake up to the sound of rain. Our vague (wave) was scheduled to leave a little after 3 am, and as we gathered the weather seemed quite OK. But literally a minute before we set off, we were informed that the route had been shortened and would skip the last, unsheltered, 6 kilometres due to near freezing temperatures at the summit, high winds (Ventoux means “windy”), and risk of storms. 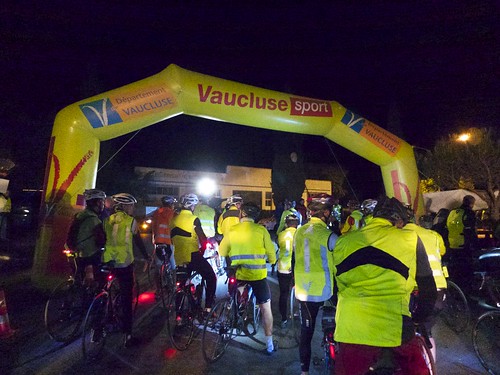 Too late to do anything but climb the 15 kilometres to Chalet Reynard, including most of the steepest stretches of Ventoux through the scrub forest. 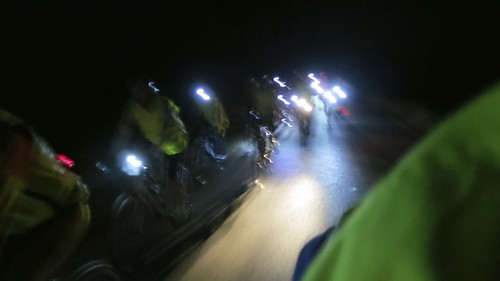 It’s a lot of fun cycling a famous road in the complete dark, in a well organised event. How well organized? As I arrived at Reynard I was greeted by someone asking my name and what colour ribbon my spare-clothes-backpack had, and a minute later I was putting on several much needed layers …. I was quite cold.

At this ad-hoc “summit” we had some food, and some awful coffee — very kind volunteers ladeling luke warm water onto instant coffee — while we cursed the weather, and waited for some of our gang to arrive. 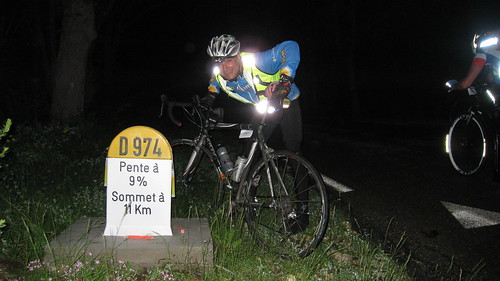 We had seen 9 or 10 cyclists continue on to the unprotected upper lunar slopes disappearing into the heavy fog. I was of two minds: I was shivering and worried heading up could be a little stupid, but on the other hand, I wanted to get to the top. Philippe suggested we peek around the next hairpin to have a look. I smiled, I knew we were going up.

And frankly, it wasn’t that bad.

The wind at the summit was a little nasty, but as the rain held off, things were always OK. I missed most of the closing ceremonies down low — but arrived in time to see Régis defend his 2011 title as heaviest to make it to the top. 🙂

Overall, a lot of fun, and I was thrilled that I had made it to the very top after all.

Me gingerly descending the upper slopes in the fog: 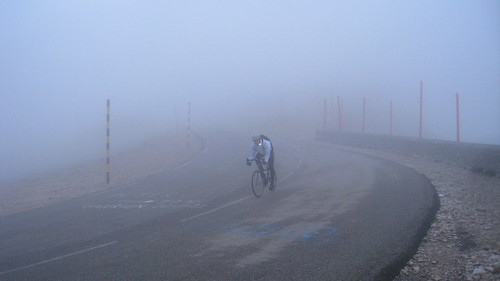 The next version of the Ventoux Night Sessions will occur in 2015 (only every second year). This non-competitive, superb-ambience event sells out relatively quickly, so mark your calendars now.