I cycled Glandon in early July for the first time.  But I decided to try this giant again on Tour de France day :

So today I cycled up the Col du Glandon and the extra couple of kilometres up to the Col de la Croix de Fer (23 km climb and about 5,000 feet vertical) to watch the second huge Alps stage in the Tour de France.

The crowds were amazing, the roads were melting, the course was steep! I had cycled up pretty early so I had a three hour wait for the riders, but time flew by in the party atmosphere as the mountain was jammed with people. About an hour before the riders the "publicité caravan" came by with 200 cars and floats, and lots of free gifts thrown at us (I was happy to get some pretzels, bottled water, and a king of the mountains hat, I gave away a Giant Hand, some cheese, a couple of key chains, and two newspapers).

Finally helicopters came streaming around the corner, so we knew the riders were close. This was the third big climb on a five climb day, and the riders were all over the road. 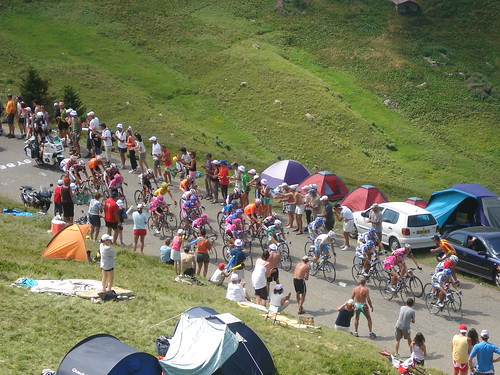 Rasmussen, who eventually won the stage, looked great as he flew by us all alone on a very steep stretch. The hill as usual was full of crazy Dutch fans, so they were pretty happy. I watched near the top of Glandon and as Zabriskie struggled to stay with a small group of riders, we could clearly hear him repeating "Push me, Push me" …. so we did. 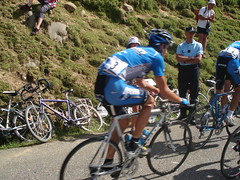 Ages after the leaders had passed "the Bus" appeared with at least half the riders struggling to stay ahead of the broom wagon. After the bus, a few more brave riders struggled up, all receiving lots of support and more than the occasional push. The pain these guys were in …… Then as quick as it started, it was over. A hair-rasing decent to the car and home to watch on TV and see who actually won. (WOW, did Landis ever hit the wall!!) 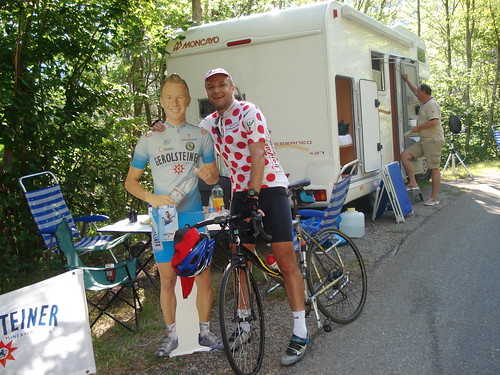