Val Thorens is the highest ski resort in Europe at just over 2300 metres. While never too steep, and with some downhills it’s a massive 38 kilometre climb with 2000 metres of ascent. Wow! 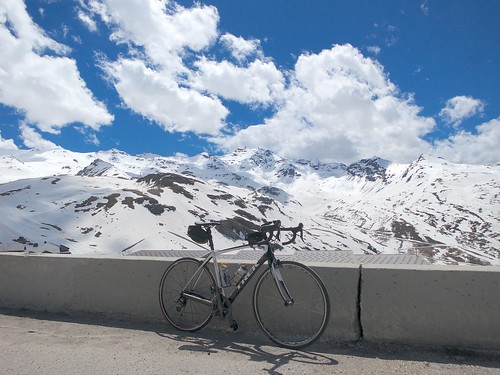 It’s been a long harsh winter that just won’t seem to end (we had hail yesterday). The Giro had to cancel or alter most of its big mountain stages, and who knows when the big alpine passes will finally open.

I often get emails from people saying they are visiting the Alps in April, May, or June and will such-and-such pass be open. Who knows, it can vary greatly from year to year – see my “Alps Cycling FAQ” for links to official road closure sites .

But to people that want to cycle up high BEFORE the big climbs are open I always say: Go where the skiers go.

Ski stations have to keep their roads open all year. And if it is sunny and there hasn’t been any recent precipitation, it can be possible to road bike a huge dry-surfaced climb even in the middle of winter (yes, Alpe d’Huez is open all year).

Because Val Thorens is so high, it has skiing through to the first week in May. So I decided to visit the second week in May — less traffic. Traffic-wise the only days to truly avoid would be any Saturday during ski season — huge travel day.

You know it’s a long climb when you pass the sign below after cycling for 15 minutes already: 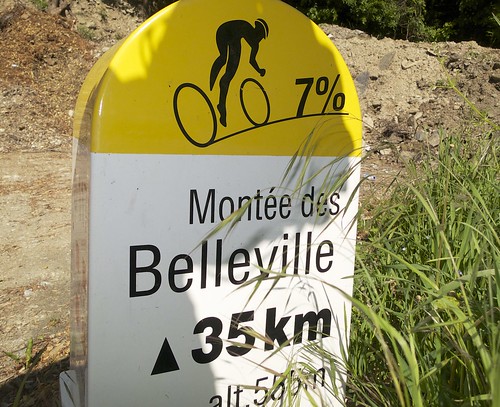 There are a couple of detours possible. There is a turn off to Col de la Coche
early on, and a little later one could climb to Sauce. Also one could descend the bottom half on the other side of the Gorge by turning off at Les Frenes. 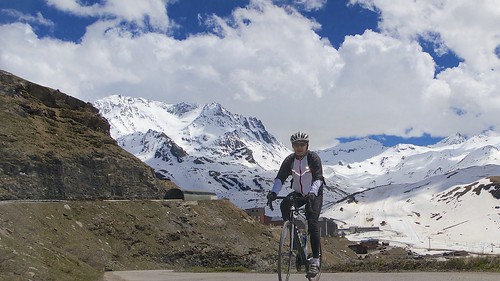