Today I visited the Tour and had the good fortune to bump into an old friend.

To ensure the autoroute exit wasn’t closed, me, being my usually paranoid self, forced another friend Mathias to get up far earlier than necessary and we headed south from Geneva.

The plan was simple. Cycle up Col du Glandon and watch stage 19 of the Tour de France. The omens were good when on the very first kilometre of the climb we found some excellent hay surfing conditions.

Half way up, another old friend – the Glandon Fox – told me one of his famous whopper fishing stories.

As usual, the locals had fun cycling decorations absolutely everywhere. Some more creepy than others:

My phone beeped, and I received an unexpected text: “You coming to Glandon today? Je suis là. Buy you a beer.” It was my old friend Yeehoo (Ben)! I think I surprised him by responding that I was only 6 kilometres below. Looking forward to seeing him again, I picked up the pace.

But the last stretch of Glandon is “tough.”

But in almost no time I was chatting away with Yeehoo:

Oops, I had made a mistake. We have met previously, but it had been a while. The above is in fact NOT Yeehoo. But he was one of the more interesting people I have ever met.

But soon I met the genuine Yeehoo and a genuine beer:

So while the day was going very well, I suddenly found myself at the top of Glandon with two Americans, Yeehoo and Mathias. Fortunately, Yeehoo’s charming (and French) better half was also in attendance. They had found a superb perched cliff view slightly above the col. So we hung out there for a while, but it was decidedly chilly/windy so we all agreed to head down to my old stomping grounds: just above the final Glandon hairpin.

Here we chatted, wandered around, and enjoyed the festivities. Madame Yeehoo sang French songs imploring the sun to return while I jacket-less-ly jumped around trying to stay warm.

There were some “runners” clearly in attendance. I won’t post any photos of the scantily clad Spaniards that were everywhere, some strangely sporting TINY UK flag underwear. But I did feel a responsibility in my Canada kit to go and have a chat with (a very French) Captain America and implore him to simply cheer the riders.

The neighbourhood took a turn for the worse when some very confused nihilists, or perhaps anarchists arrived:

Fortunately, a huge group of chanting Colombians next made their welcome appearance. Very fun. More on them later.

We ran down from our perch to enjoy the publicity caravan. We did very well as a group: A polka dot cap each, nice baked goods, plenty of haribo, more hats, and a myriad of bizarre stuff. For example, a couple of French unions threw me some literature. Possibly their manifesto? I kid you not.

I caught this: A Cow Key Chain! I win.

As I sipped some free caravan banana juice I was content. This had been a great day. I got my stuff together and headed to my bike. Then someone reminded there was still a bike race to come. Oh yeah.

Five helicopters arrived and all landed just above the col. The weather clouded over, the wind picked up and we worried that a storm was imminent. But it stayed dry and finally the riders and more helicopters arrived. No great photos – I had the camera on a bad setting, but here are a few:

Nibali and some tense Colombian fans:

Quintana with friends and some jubilant Colombian fans: 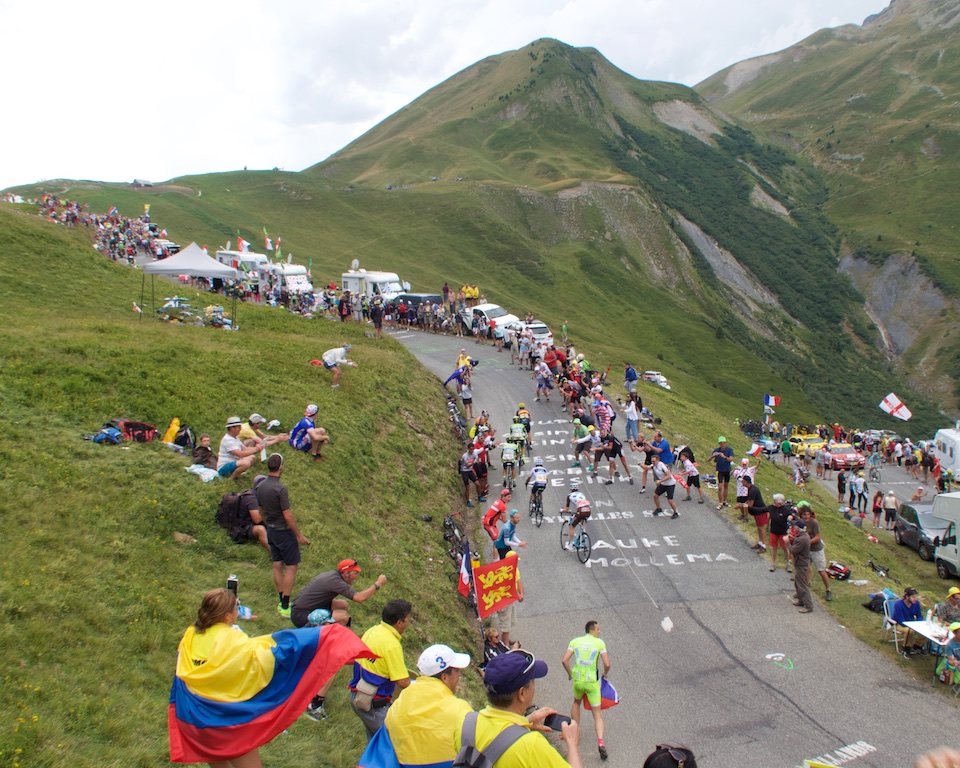 One of my favourites, Thibault Pinot: 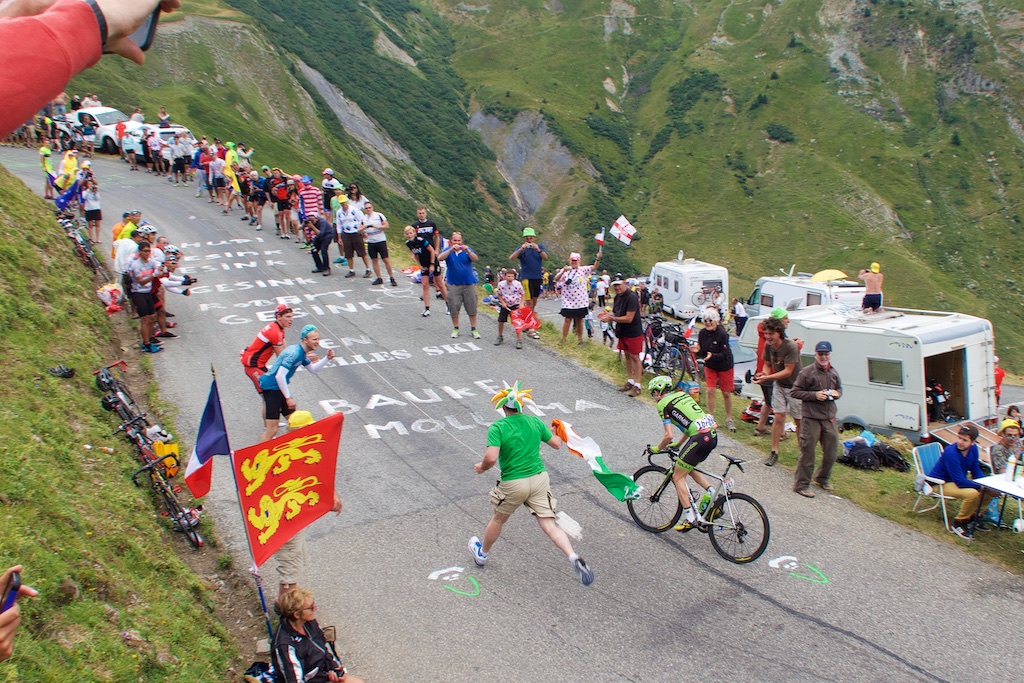 The Gruppeto wasn’t too far behind, this being relatively early in the stage. After they passed, we quickly descended fearing the dark clouds. We successfully reached the bottom as a few drops arrived. We were safely in the car heading home when the heavy stuff arrived. Phew. 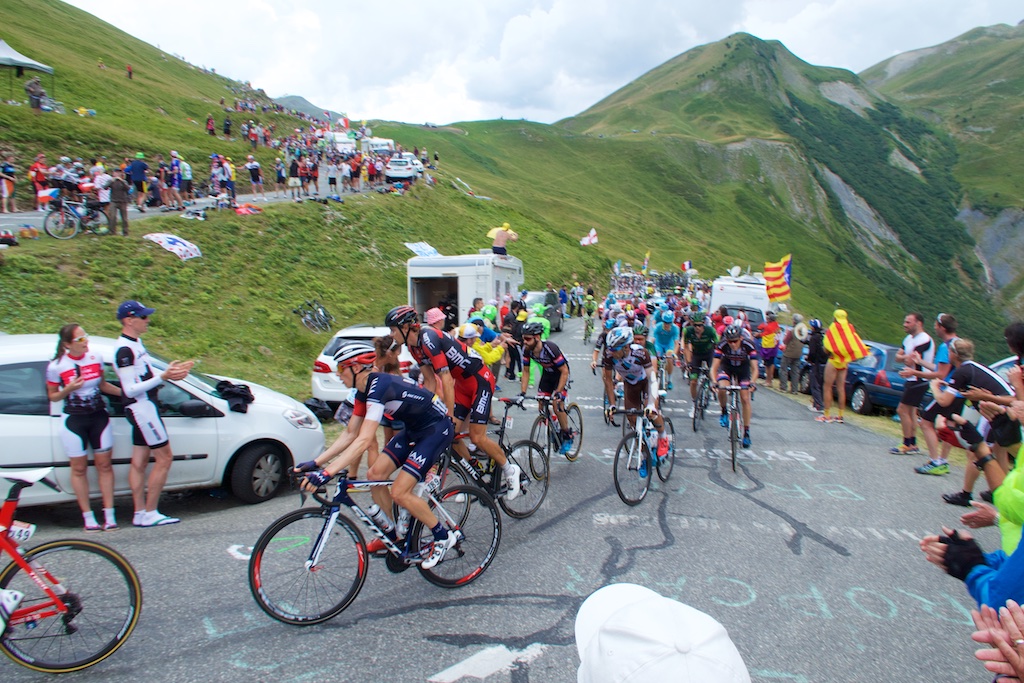 For me, going to a Tour mountain stage never disappoints. Everyone is in a great mood. We were good-naturedly encouraged while cycling struggling up the mountain by fans of all ages, and nationalities. The people-watching was superb, the publicity caravan too-much-fun for a child like me, and the passage of the pros exhilarating. And, this year, I was surprised at the summit by an old friend with a beer. Not bad.