EDIT: Announced early July, sadly Col de la Ramaz has been eliminated from the Etape. It’s due to a landslide on the steep descent that the authorities can’t make stable. Here’s a photo when I climbed it in May (that barrier is in the road). HOWEVER, THE TOUR DE FRANCE will keep Ramaz as part of the route.

The 2016 Tour du France route was announced this week. Every year, Tour organiser ASO runs a cyclo-sportive, open to all, that rides one of the Tour’s mountain stages a few days before the pros. To register see the official site here.

This year the Etape will replicate Stage 20, on the north edge of the French Alps. The 146 kilometre route has perhaps 3500 metres of vertical ascent, with four big climbs, each one a little harder than the previous. There is a detailed map of the route at the bottom of this post.

This is a tough but rarely crazy route on some of the more famous climbs in the region. Nothing too high, but always scenic. Not bad.

The stage begins from the quaint Haute Savoie ski station of Megève. The first few kilometres are gently down, giving the opportunity to warm up the legs. At Flumet, the route turns north and heads up into the Aravis Alps. Col des Aravis is not the steepest climb, it’s good way to start a long day in the saddle.

There are big mountains on both sides and the huge ridge near the summit has almost a Dolomites feel to it. Don’t worry, there will be no snow next July. I just usually cycle Aravis in late winter as it’s the only one of the four cols in this route that always stays open during winter.

The descent of Aravis is also not too steep, initially nice sweeping curves: enjoy. Lower down, the route passes through a few ski villages: La Clusaz, St. Jean de Sixt, and finally Le Grand Bornand before heading up the second climb of the day.

If you are someone that likes to count the cols you have visited, note the route passes by Col de St. Jean de Sixt during the descent.

This is the easier side of Col de la Colombière. In recent decades, both sides have made frequent appearances in the Tour. Contador and the brothers Schleck in 2009:

(note, all photos by me and my little tripod except this superb one, taken by my friend Katy) 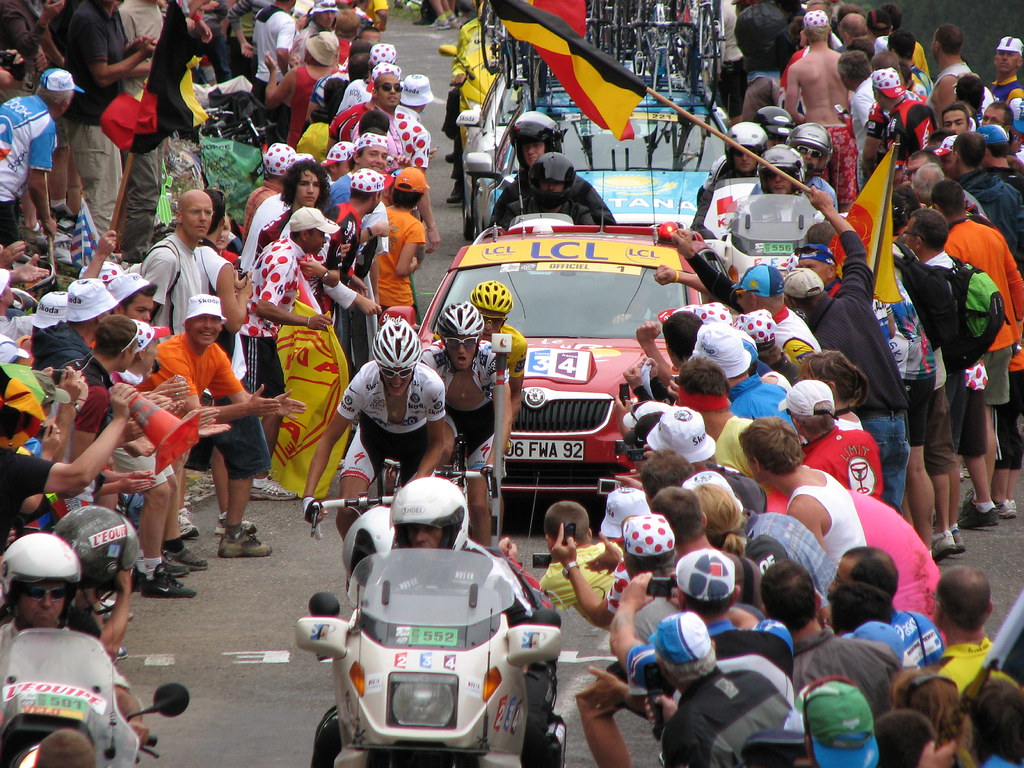 Don’t confuse Col de la Colombière with nearby Jura mountain climb Le Grand Colombier – which will also be in the 2016 Tour de France.

After climbing through the ski station, the last three kilometres are the most fun. 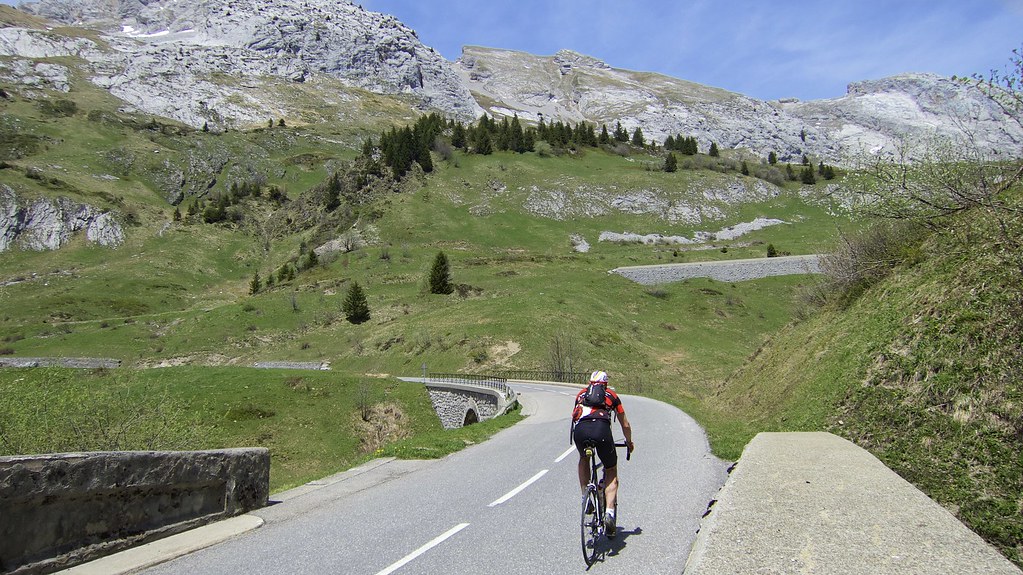 View from summit of south side hairpins: 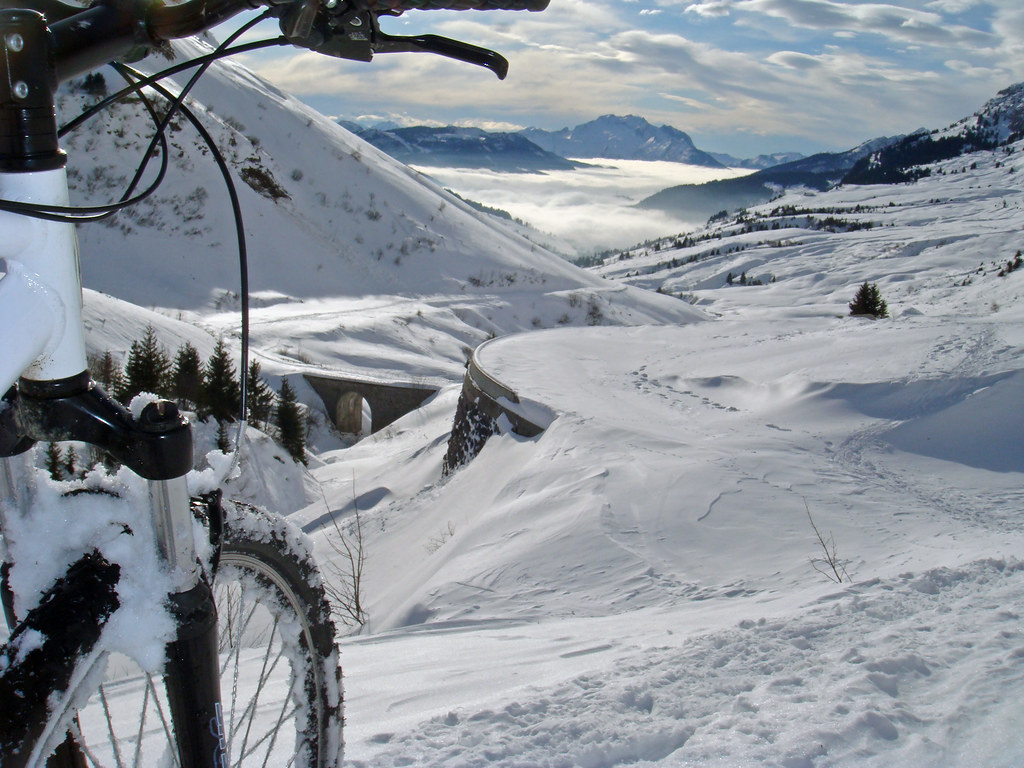 It’s a long (16.5 kms) descent down the more famous north side of Colombière. First along a fun cliff road, then eventually through the woods. Careful, the top three kilometres of the descent are the steepest: 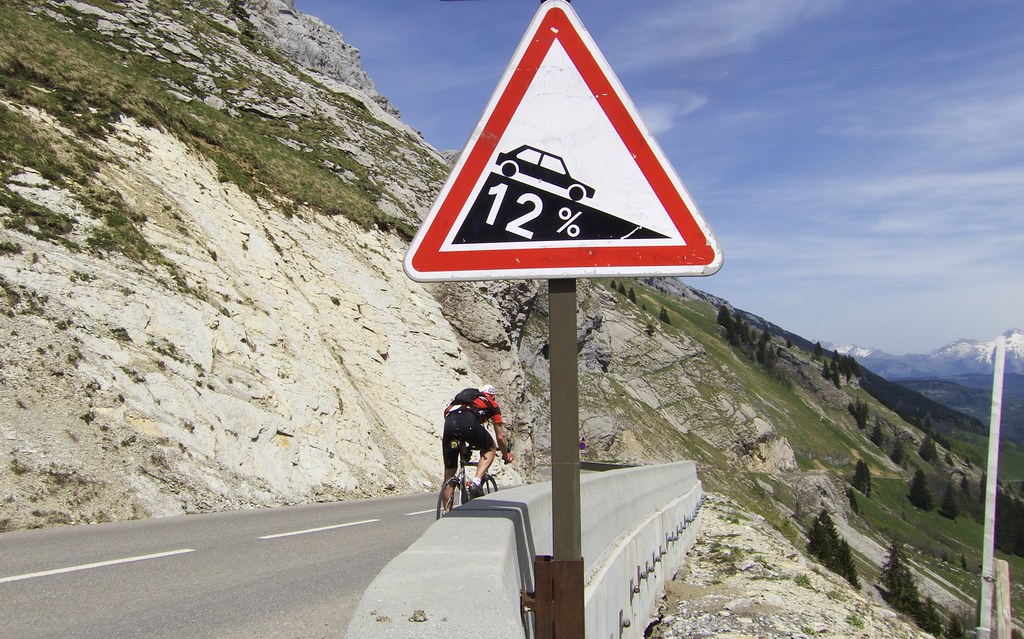 After descending Colombière the route must briefly traverse the busier, more industrial valley through Cluses.

Next, the route climbs Col de la Ramaz. I really like this climb. Fairly challenging, the road meanders higher before passing through a newish tunnel – the steepest part of the climb is inside the tunnel – then entering a scenic alpine plateau.

The Tour climbed Ramaz in 2010. The road chalk has pretty much disappeared now. 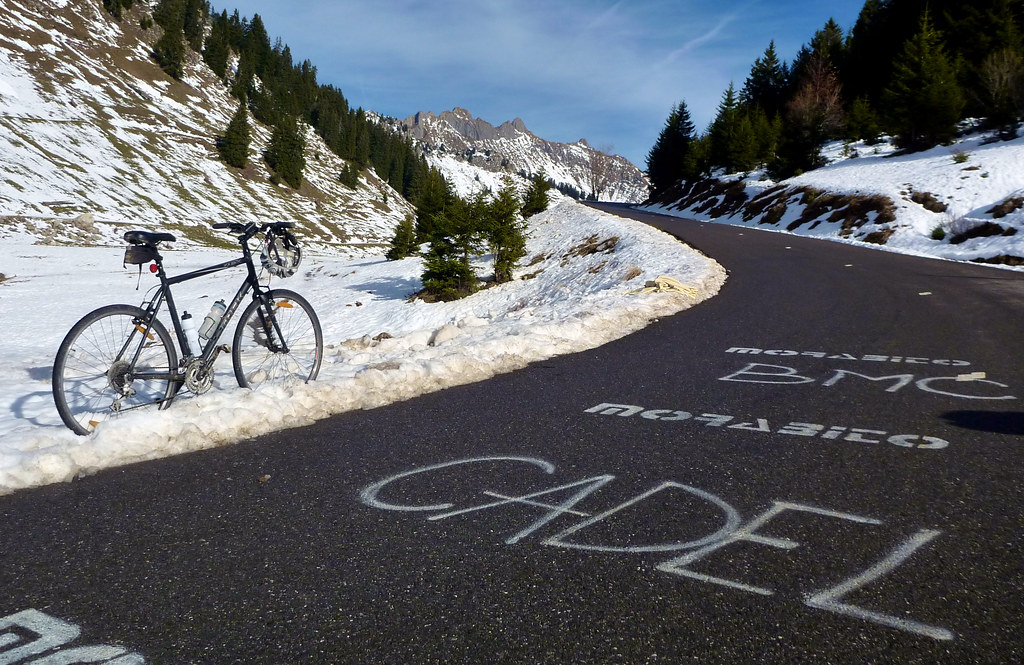 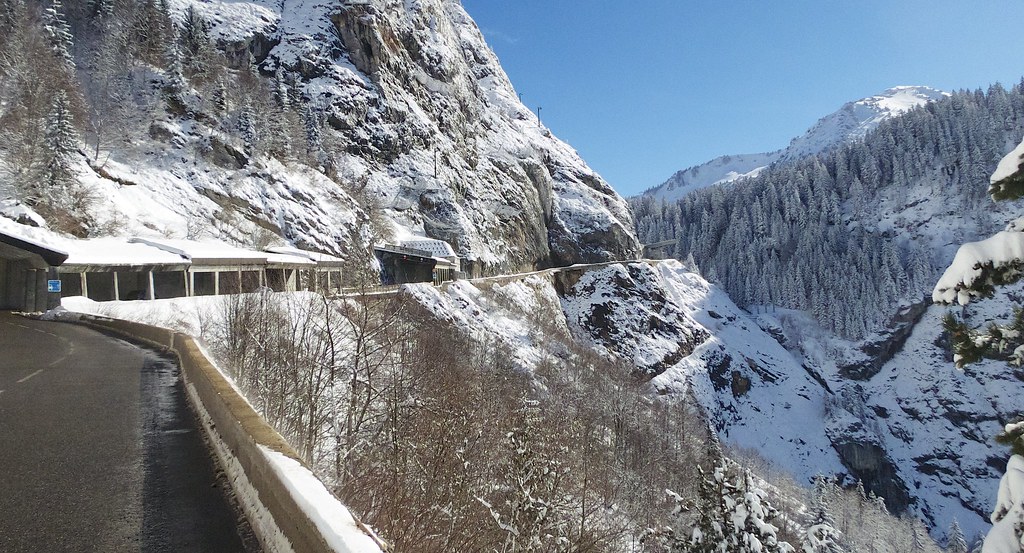 Note, if you are not in a hurry, just as you enter the tunnel it is possible to step out, over the barrier, onto the old cliff road. It may be a little messy but it’s passable. 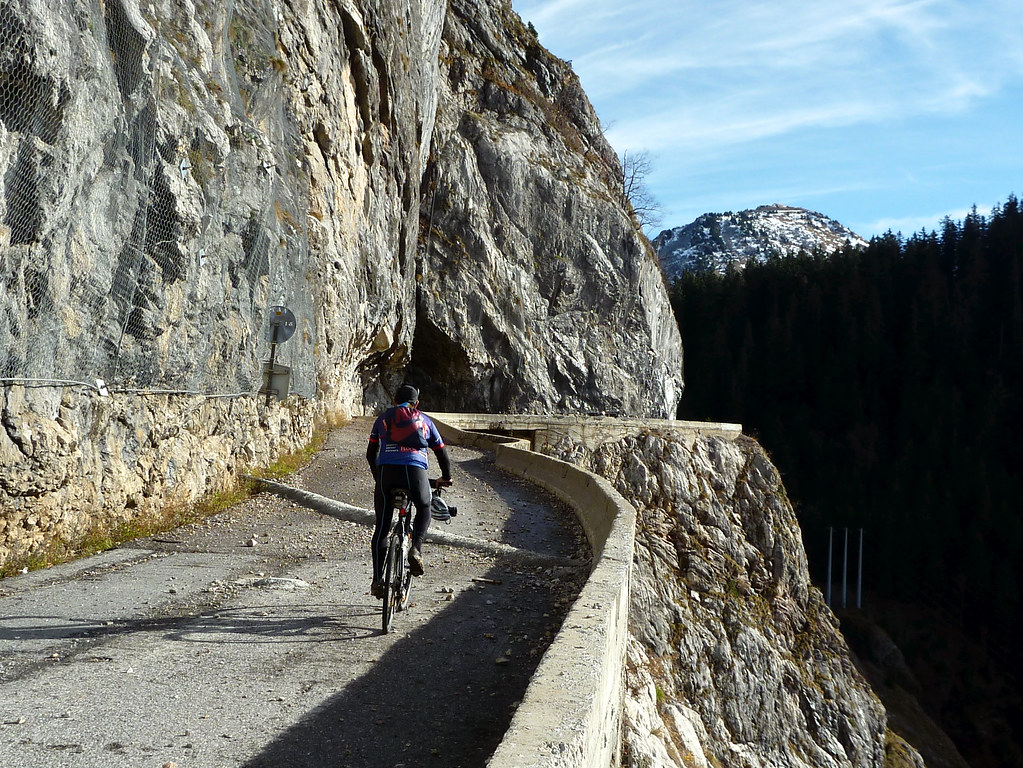 Note, the road doesn’t actually cross the geographical Col de la Ramaz – 1559 metres), instead brushing up against it and heading a little higher. The road Col sign is at 1619 metres.

It’s possible to cross country ski to Ramaz in winter:

The descent from Ramaz begins gently enough into the village of Savolière, but then there are 6 extremely steep kilometres with sharp hairpins. Careful. 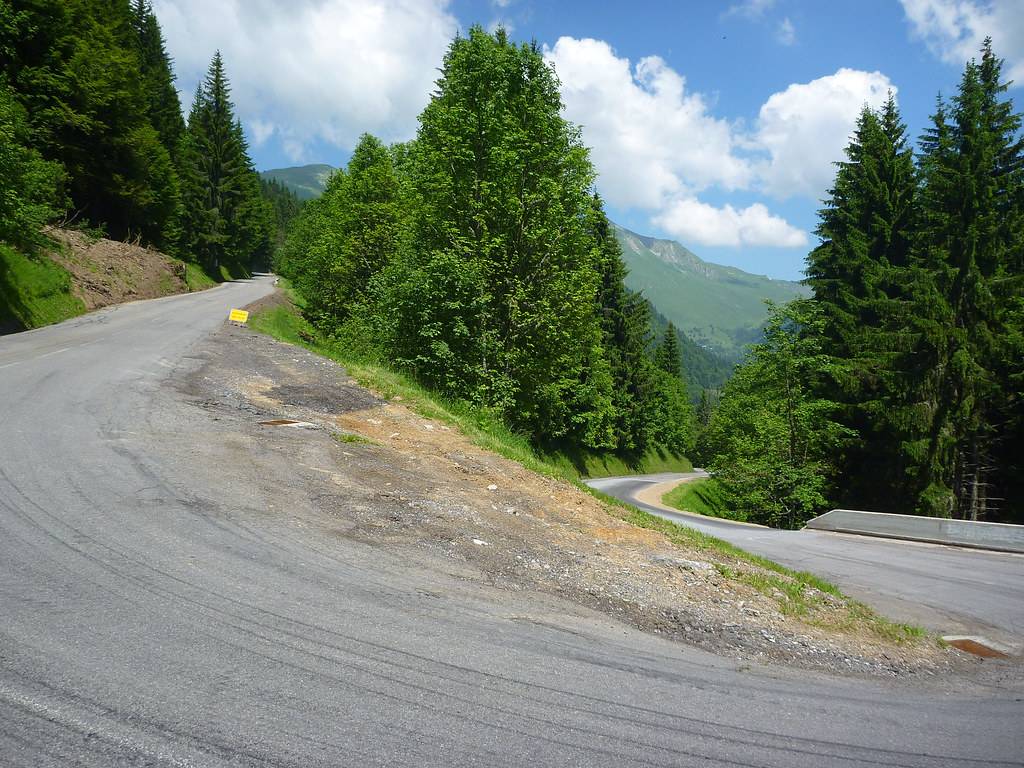 After descending to Taninges, there is a flat traverse of perhaps 10 kilometres to Samoëns. If it’s hot, make sure to load up on water now. I once did a cyclosportive with the same Joux Plane to Morzine finish and nearly died of thirst only to find the next drink-stop uselessly at the top of the climb. 🙂

Col de Joux Plane is a tough way to finish the day. A very uneven climb, with some very steep short ramps in the teens %.

I think it’s an interesting climb. Similar to Ramaz, this is not some purpose built ski station road. It wanders up through alpine meadows always heading higher towards bigger mountains. 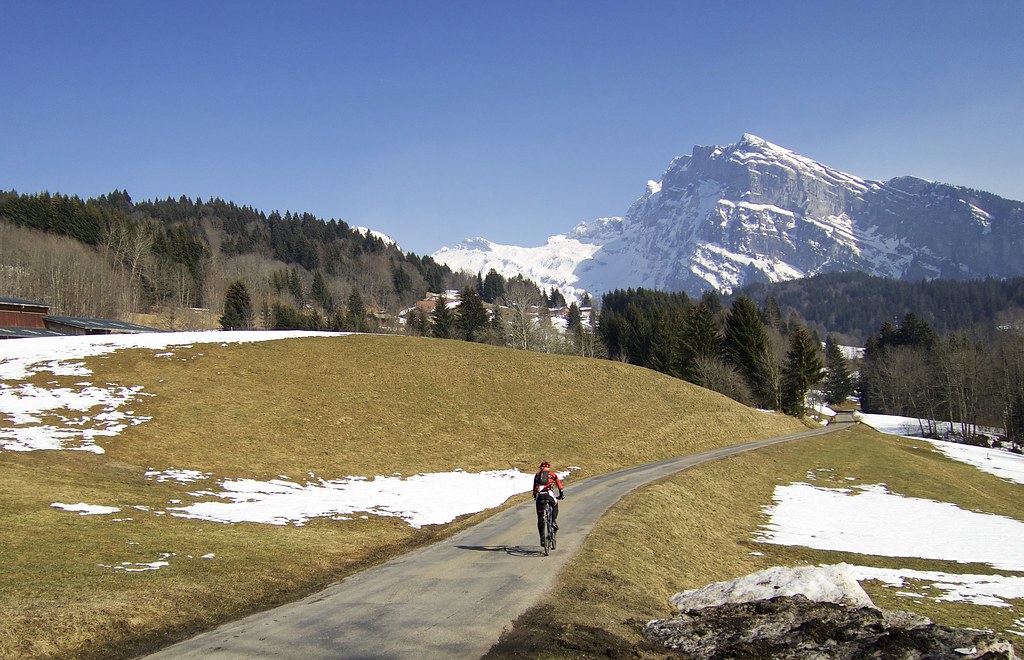 Joux Plane is another great place to cross-country ski in winter. A couple of times I have mountain-biked up and rented XC skis at the Col – see here. 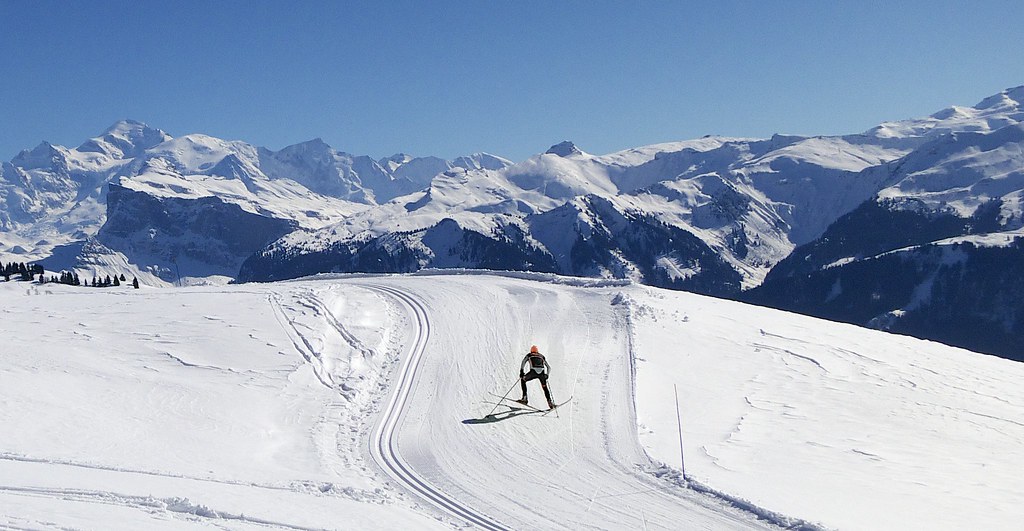 Lac de Joux Plane (at the Col itself): 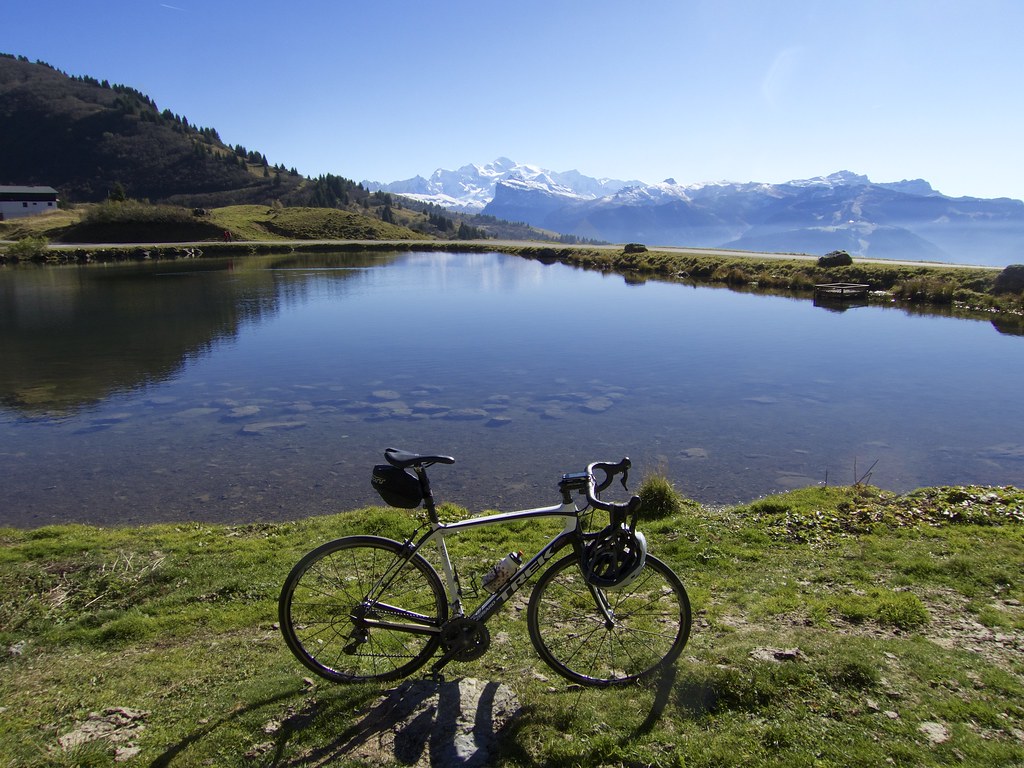 During the 2012 Dauphine, Nairo Quintana was first to summit Joux Plane. Perhaps we’ll see him in first again in 2016? 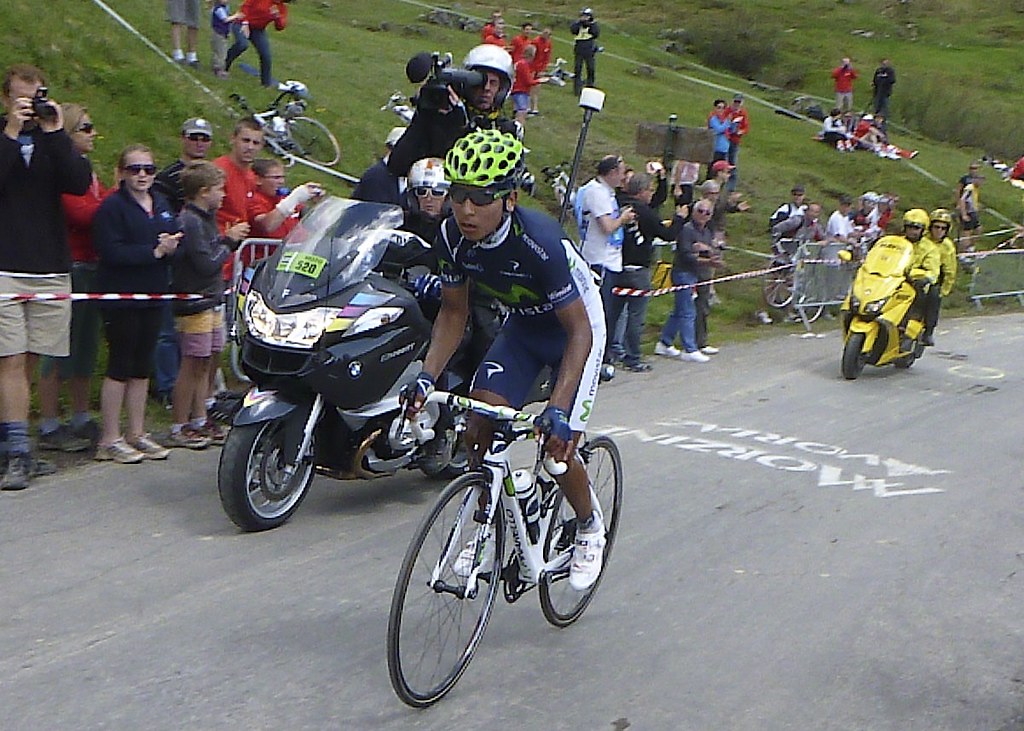 Again, the road here does not pass over the geographical Col, but brushes up against it. From the summit is a quick up down to Col du Ranfolly, before a hair-raising descent mainly through Morzine ski slopes down to the finish. Careful. Very fast, but occasionally technical.

The route was closed for most of 2015 due to a landslide just below Col du Ranfolly – see here. Although it has always remained passable by bike. No doubt, the route will be repaired very soon in preparation for the Tour.

Again, this is a tough but rarely crazy route on some of the more famous climbs in the northern edge of the French Alps. If you don’t know the region, you should enjoy this.

If you’re riding L’Etape then I wish you the best of luck. If you’re watching the Tour stage, come say hi to me near the summit of Joux Plane. I’ll be the fool likely holding a beer: 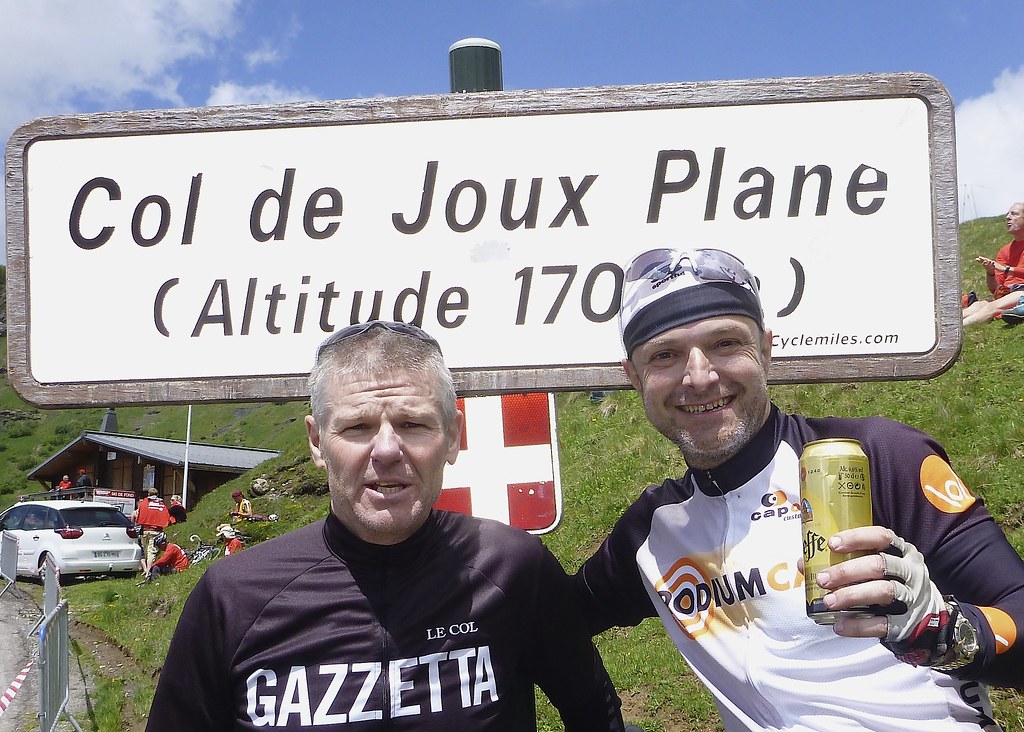 The map below should be 99% accurate. Thanks to Ben who runs the great Veloviewer site for figuring out the route from the Tour presentation video before ASO bothered to post a map. 🙂 See his preview of the Etape climbs here.