I am going to split this ride into two blog posts as it features two very different climbs (and I took a lot of photos). This post deals with the messy loop in bottom part of map.

If you road-bike up the Italian side of Piccolo San Bernardo, I highly recommend climbing via Colle San Carlo. Much harder/quieter, it descends into La Thuile skipping the busier, tunnel-filled main road. Details here.

The profile at left is only for the paved road to the Col su Petit-St-Bernard. It’s a nicer climb than I remembered – much of it recently resurfaced. I passed three roadies on my cross bike and one of them couldn’t resist chasing me down. A friendly Brit, we enjoyed chatting and he gleefully out-sprinted me to the Pass (2188 metres) at the Italian/French border.

But for me this was where the fun started. On the Italian side of the Col, I took an unpaved ski station service road heading higher through the deserted ski slopes.

It’s a bumpy but wide gravel road that snakes up and up. It’s never so steep as to be unride-able, but at times it’s hard work. My first summit of the day was Col Fourclaz. There was no Col sign but the top of a ski lift kindly listed the altitude:

From Fourclaz there was a steep road higher to a little peak with another chair lift. This was Chaz Dura at 2581 metres.

This outcrop is a dead-end, so I descended and followed a road in the opposite direction to Mont Belvédère – first passing over Colle Belvedere (Col du Belvédère) at 2569 metres.

From the Col I proceeded higher to another chairlift summit atop Mont Belvedere. The Sign said 2613 metres. Here is a view of Chaz Dura and if you look carefully you can see the chairlift at top of Col Fourclaz. I had climbed to Fourclaz on those hairpins at left. 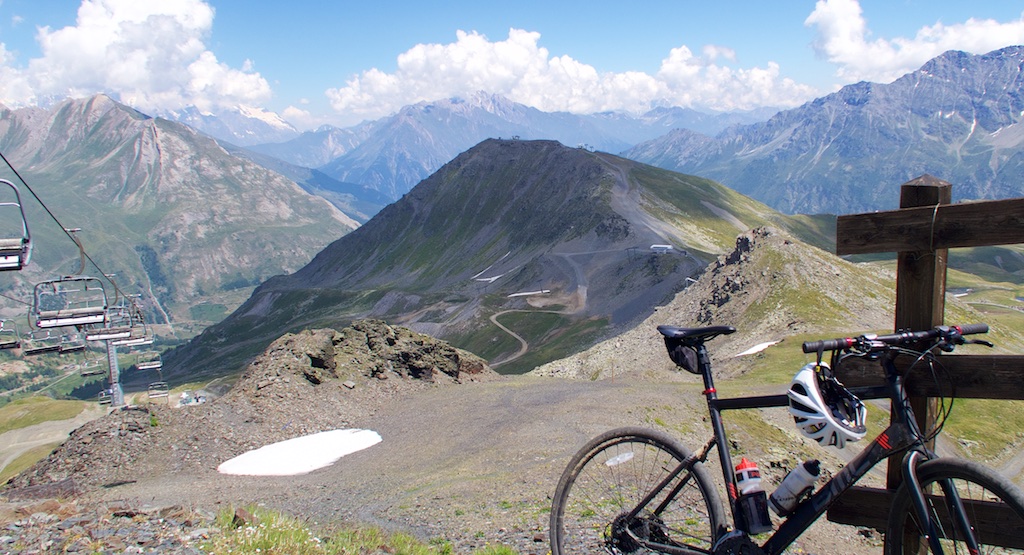 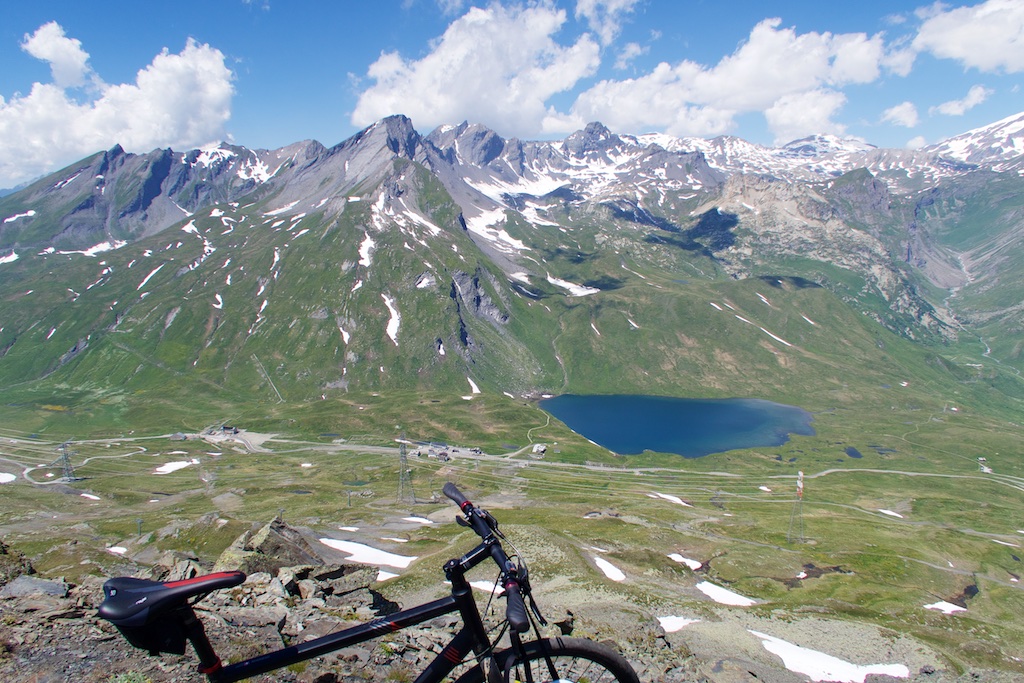 There are lots of old military installations in this stretch of French/Italian border. I will visit a nearby ruined fort at 2395 metres in a couple of blog posts). Mont Belvedere had old barracks: 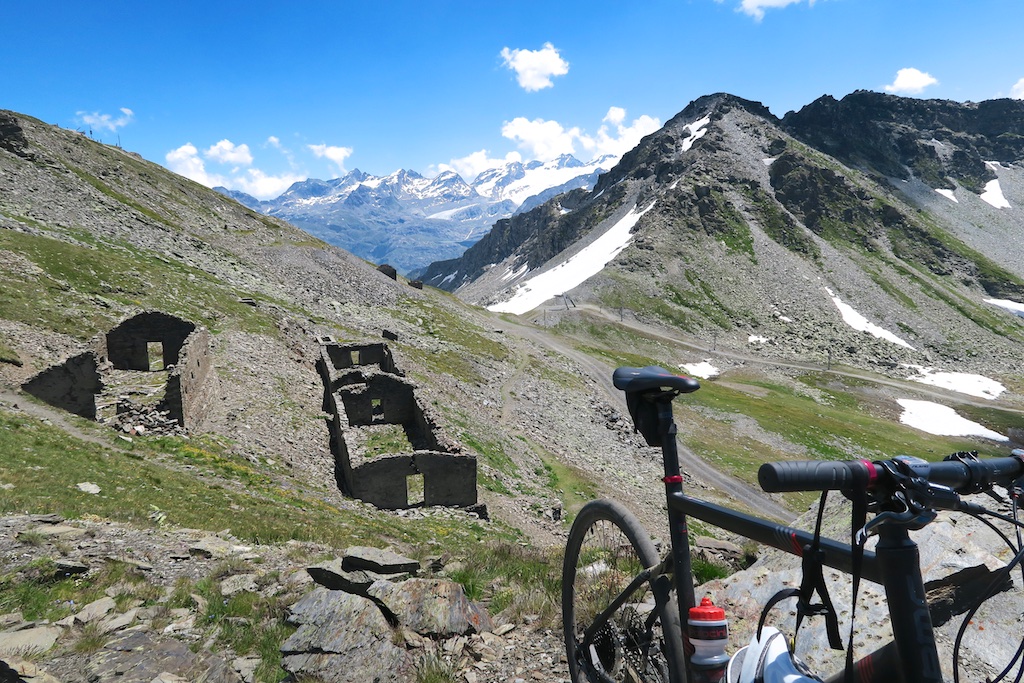 I’d future plans for the far side, and instead wanted to try and return towards La Thuile without using the main road – via ski slopes/surface roads. So I returned to Fourclaz and began down the far side.

I saw an artificial lake off the main trail and went to investigate. My attempt at being artsy (2300 metres): 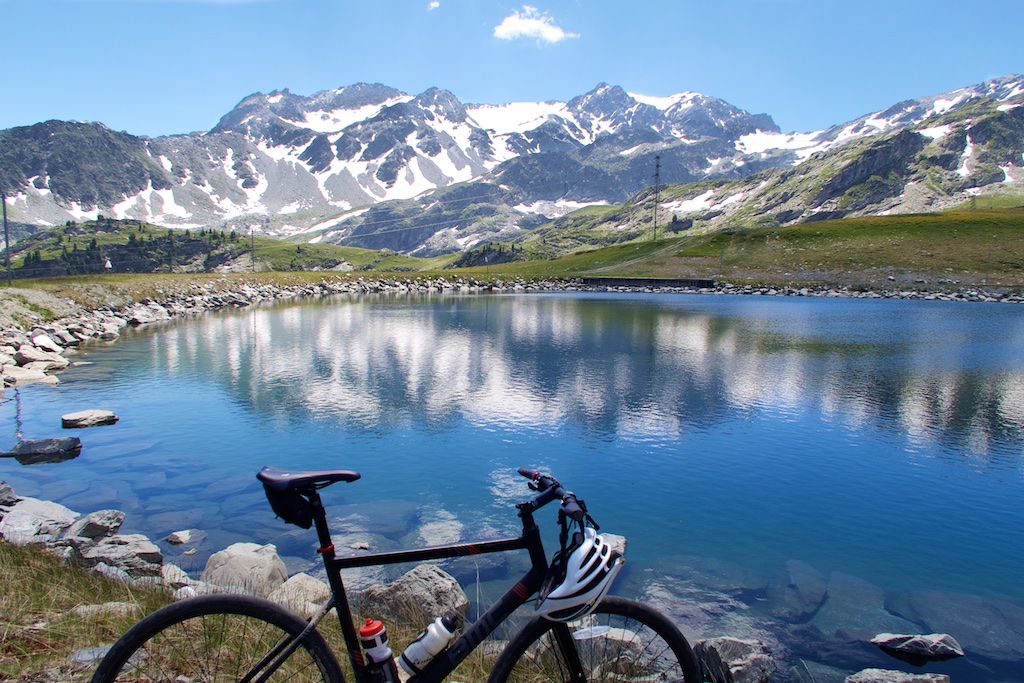 The descent headed through the centre of the ski area – a few winter chalet/restaurants, etc. At roughly 2000 metres I found a badly paved road that quickened my descent.

Rejoining the main road between La Thuile and Petit St. Bernard I was parched but satisfied, so I stopped at a roadside restaurant for a beverage.

The peace and quiet of empty, super-high roads with killer views makes for a perfect day on the bike.