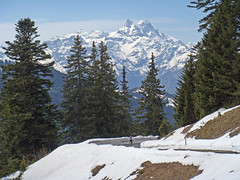 The final day of our mini Swiss Alps cycling trip.

We had driven from Gstaad to Villars yesterday – and had to take the long way as the Col de la Croix is still closed due to snow.

But it was our cycling goal, so we decided to have a look from the Villars side. This is a giant climb (20 kilometres 1,370 metres ascent – about 4,500 feet). But today our goal was just a leisurely ride up the far more scenic top half starting in the ski resort of Villars.

See this link for grade details of the entire climb from Bex. 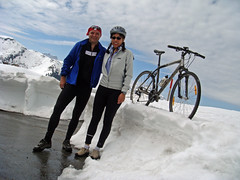 Another perfect day surrounded by the Alps. Although there was a barrier down blocking cars, the route had obviously been ploughed. As we got higher, the snow steadily increased but as we reached 1700 metres I was hopeful of reaching the top.

Suddenly around a bend the road was blocked with a metre of snow! But we were nearly there, so we left the bikes and hiked to the top.

The only Col sign is a plaque (in the above link) but it was buried under piles of snow and I wasn’t sure where to dig 🙂 . 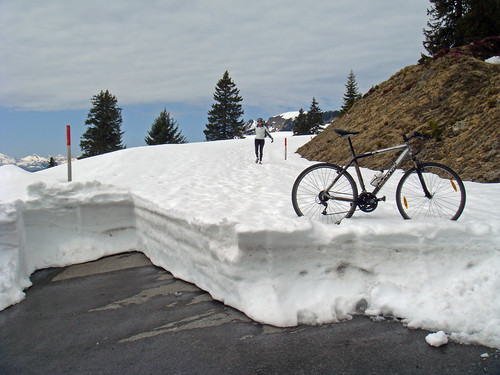