I have climbed Col de la Forclaz de Montmin quite a few times from the south side (details here) – but never from the north side until now.

While the south side is a little more savage and quieter, the north side has far better views of Lake Annecy – and both sides get steep. 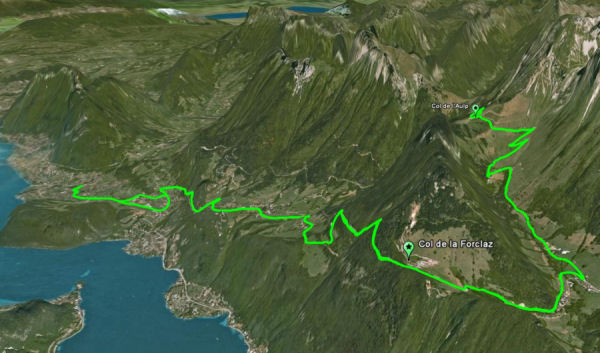 Just over the top, before Montmin is a little road up to Col de l’Aulp. Another interesting detour I learned about from Bastien’s web site. It’s an incredible 4 km climb. Sometimes VERY steep (near ~20%). The first half is still paved road, but then it becomes a hard gravel trail.

It was pretty cloudy so no great photos – but it is beautiful here – underneath steep peaks. For far better photos have a look at the last few in Bastien’s trip report from April 2007.

I tried to continue on to Col des Nantets but I gave up half way – it’s a mountain hiking trail ….. no good for bikes. 🙂

This is a fantastic climb – worth re-doing on a clear sunny day as views everywhere.