I talked about this great loop around Lake Annecy on my recent Top 5 Lake Annecy Rides post. The road was a bit slick today and there was the occasional ice patch in the shade, but generally it was fine for a road bike.

This is a fantastic climb – short but VERY steep – leading to great views of Lake Annecy.

It’s the first climb I ever watched the Tour de France on (stage 17 in 2004 – won by Armstrong). It was also the last climb in last year’s Dauphiné Liberé – won by Christophe Moreau.

One of the fun parts of riding in the Alps is reading the cycling graffiti on the roads. Sometimes it’s real art. Before big races fans are often all over the route with huge paint rollers creating messages to their favorite rider. The Dutch and Germans seem particularly addicted to painting the roads.

Today’s route still has remnants of the 2004 Tour de France Graffiti – including several artistic polka dot tributes to French hero Richard Virenque. The beginning of the route used to have a big “Launch Lance” in yellow – but its finally worn away. 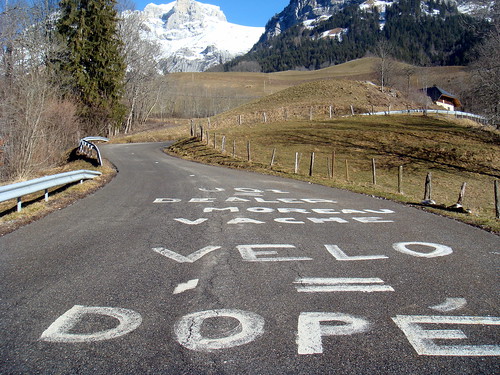 Here’s a couple of old photos of me and Tour de France grafitti and a photo I took of Moreau, Virenque and Simoni climbing today’s climb (Forclaz) back in the 2004 Tour de France.