A recurring rant: Cyclotourists (understandably) come to the alps and focus on the famous climbs, usually cycling the Route des Grandes Alps. Of course, this makes some sense, hitting the biggest or most famous hills …. but it often means skipping worthy and far quieter alternatives.

10 kilometres long, it starts off easy enough and then becomes brutally difficult – with an ever varying grade and several ramps with % grades in the teens.

But while it may be hard, it’s beautiful and quiet, surrounded by the Aravis alps. The top is a dead end – although I did once carry a bike down the other side to Reposoir to make a loop with Col de la Colombière. But it’s not something I recommend. 🙂

Half way up to Col des Annes, hard work:

After wheezing to the top of Annes, I descended and decided to climb the south (easier) side of Col de la Colombière. Eleven kilometres, and seldom steep, my legs thanked me for something a little more relaxing than Annes.

The last two little photos just to the left are from last week, as I climbed both sides of Colombière – including the super hard Romme detour – but didn’t blog it — as I have written about it so many times – see below for some links.

For more details on other options for Col de la Colombière see here and here. For a few more smaller climbs to combine with Col des Annes see here

It has been extremely hot lately. Frankly, I only know one solution to beat a heatwave: 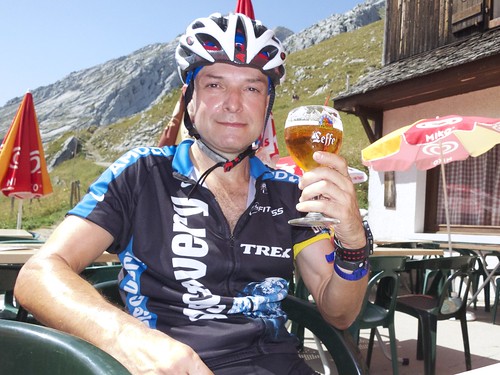