It is still too early for the high Alps roads to be open. But I thought I’d climb some beautiful roads and see how high I could get. A fun snow ride

Cormet de Roselend is one of the more scenic climbs on the Route des Grandes Alpes. I knew it was closed, but the climb to Col du Meraillet and the Lac (and dam) de Roselend was open.

There was some sort of bizarre car rally down in Beaufort and surrounding area, but my route was near deserted. I’d never been up here with this much snow around, and even with the low lake water levels, it was still absolutely beautiful. 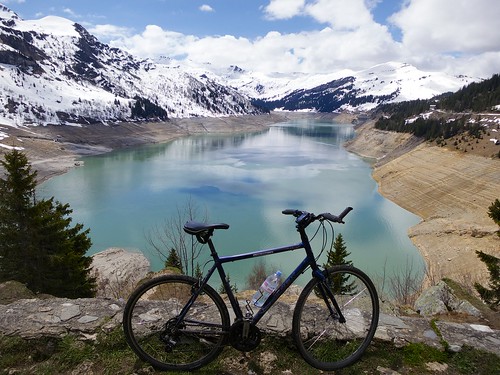 I cycled around the lake in the off-chance that I could get up to the summit of Cormet de Roselend, but 5 kms from summit I bumped into this snow wall covering the road: 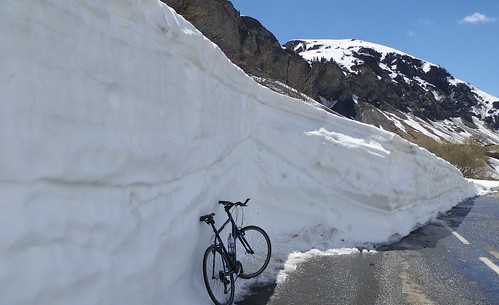 For details of both sides of Cormet de Roselend – see here. It should open by end May.

Next I descended down to Beaufort with the idea of visiting the smaller Lac (and dam) de St Guérin – details here. However, a couple of kms below the dam, I ran into uncleared roads, too snowy. So instead I turned up a gravel (south-facing) road labeled “Col du Pré 6kms.”

I had already passed the turn off to the paved route to Col du Pré — it was marked as closed. But I had no other ideas.

Note, the Col du Pré profile above is for the paved version. It is a steep, and fabulous “long-cut” to Cormet de Rolselend – crossing the Roselend dam. Highly recommended for stronger, or (like me) patient cyclists. Details here. The views above the dam or about as good as it gets.

The gravel road continued up past a couple of chalets, then descended briefly and joined the paved route to Col du Pré. Such a fun route, although I didn’t expect to reach the summit. 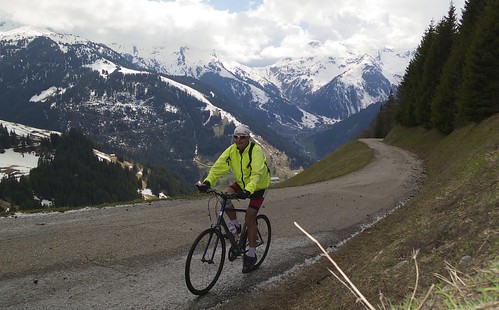 However, despite a few snowy sections shaded by trees, I made better progress than I expected. Finally, I ran into unride-able snow. But only half a kilometre from the Col. 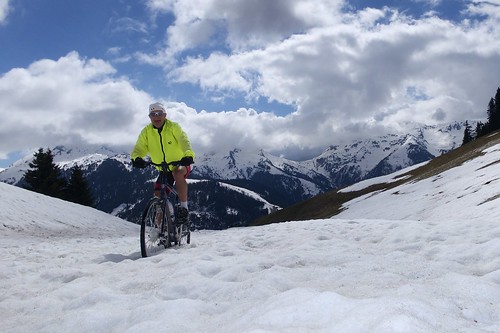 I carried my bike to get the Col sign photo (see small photo near top) – and … saw four post-season snow boarders sliding out of the woods. 🙂

We were all a little crazy …. but they had to walk most of the way down …. I had a bike.

This ride was worth the effort of visiting a beautiful region — even with full knowledge that the featured climb to Cormet de Roselend would be impossible.