Trending
You are at:Home»History»The Legend(s) of Passo di Gavia 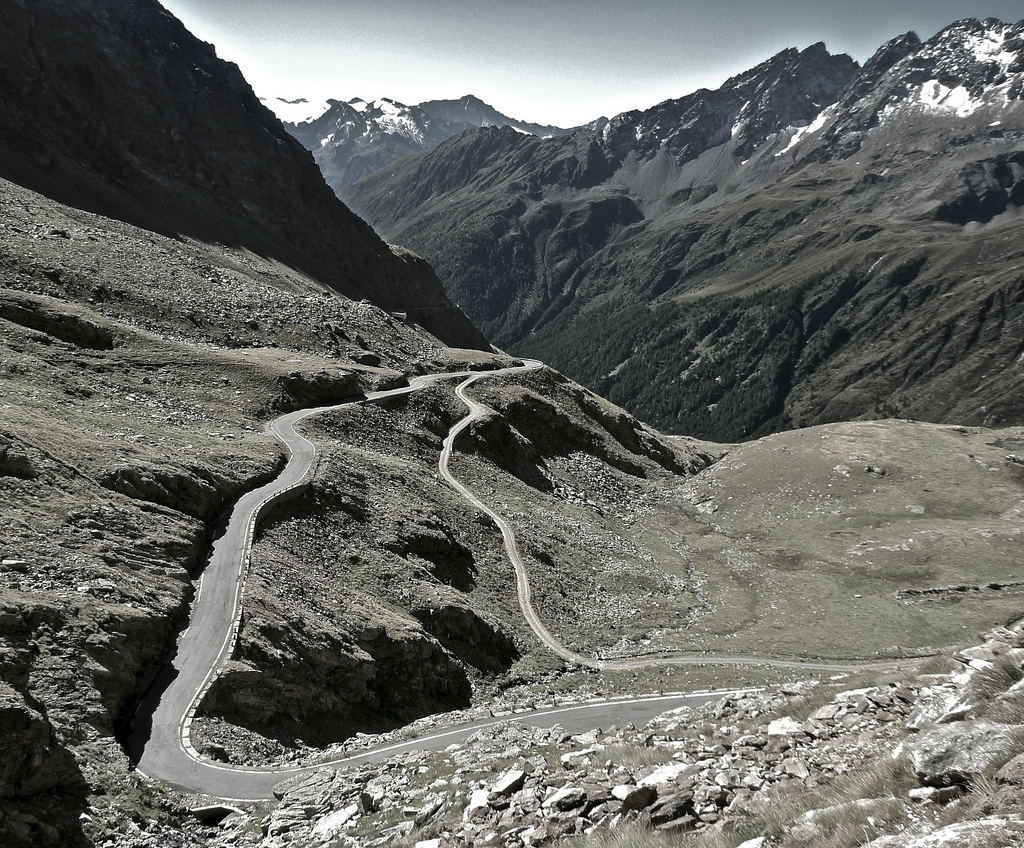 High in the Italian Alps, if you are very quiet, you might just hear the whispering of two lovers whose spirits live on in the waters of Lago Bianco (White Lake) and Lago Nero (Black Lake).

A beautiful orphan falls in love with a young shepherd only to have their love thwarted by an evil uncle and the Devil himself. They escape but are turned into lakes separated by the Passo Gavia for all eternity. Nice views at least.

At 2621 metres, Passo Gavia is the tenth highest paved mountain pass in Europe. It is in Lombardy, dividing the provinces of Sondrio and Brescia. It is NOT in the Dolomites.

While I have no idea of the origin of the name of the pass (feel free to enlighten me), Gavius was the nomen of the ancient roman Gavia gens (clan). And the Arco dei Gavi in (relatively) nearby Verona does indicate that the Gavia clan had some influence in the region. No word if they were cycling chariot fans.

Gavia is also the genus of birds that includes the loon and a cool california surfer chick.

The Gavia has appeared seven times in the Giro, first in 1960, six times as the “Cima Coppi” – the highest passo in the race. More Giro talk lower down.

The Battle of San Matteo – formerly known as the highest battle in history occurred at and above Gavia during World War 1.

“At the beginning of 1918 Austria-Hungarian troops set up a fortified position with small artillery pieces on the top of the San Matteo Peak, from which they were able to shell the road to the Gavia Pass and thus harass the Italian supply convoys to the front line.” Wikipedia.

Just north of the pass is a monument commemorating the battle: 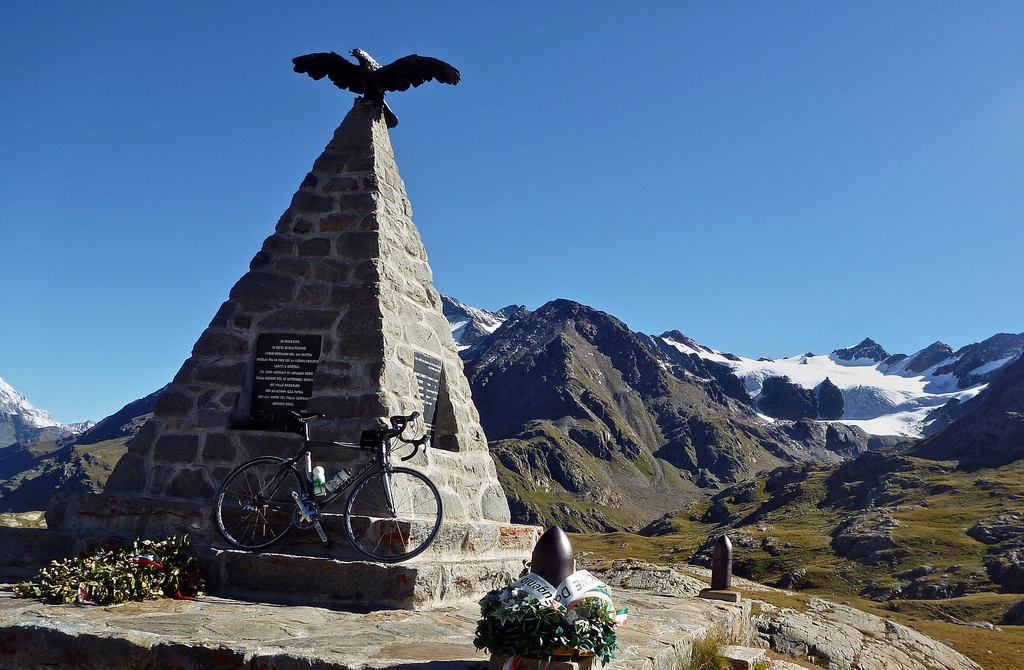 A few kilometres from the summit is a newish tunnel replacing the old cliff road. While closed to cars, it is still possible to take this fantastic vertiginous road (I hate long, uphill tunnels) — although it is a rough, gravel surface.

The Giro will skip this cliff road and climb through the tunnel. 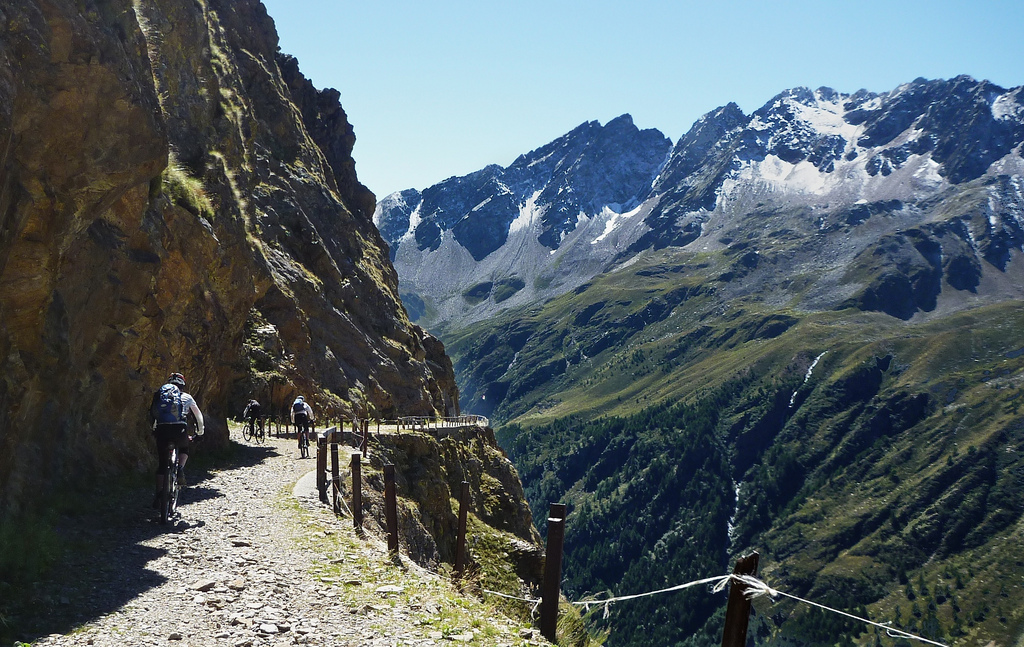 In 1954 a military truck fell off the cliff killing 20 young soldiers. Monument at crash site: 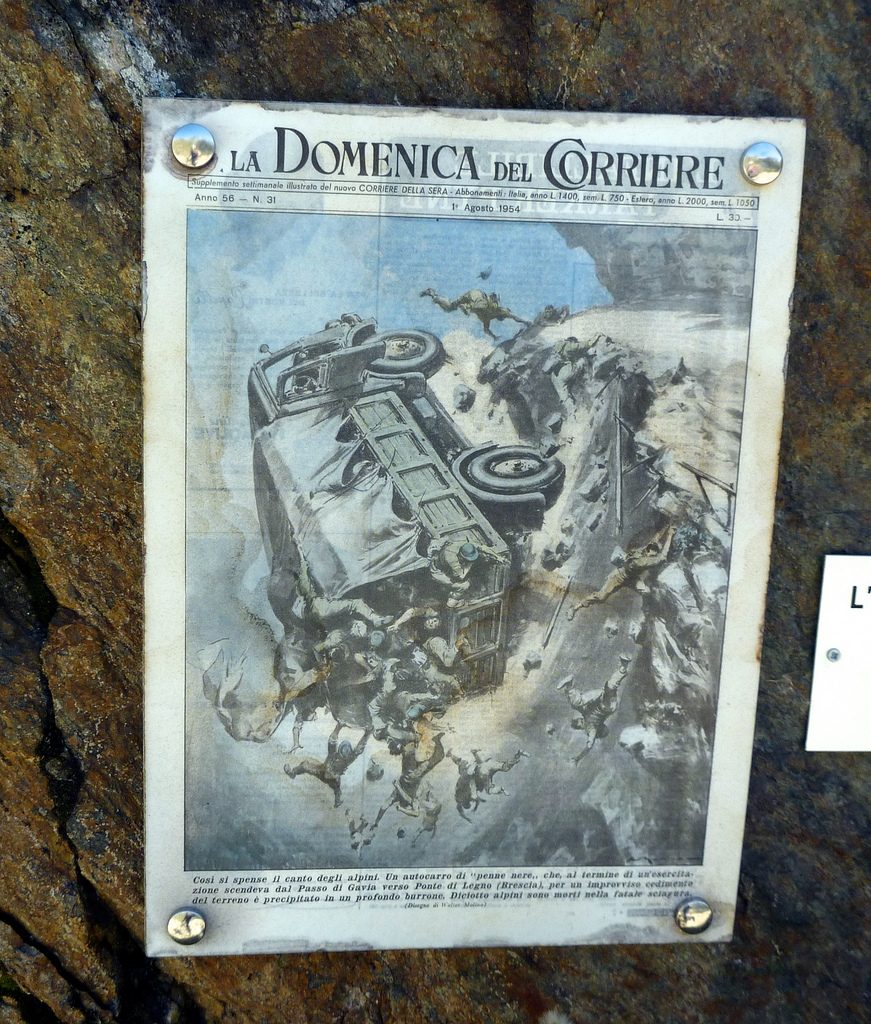 Passo di Gavia was host to one of the truly legendary Giro stages. In 1988, after freezing rain on early-stage climbs, a blizzard met the riders as they climbed an already snow lined Gavia.

Dutchman Johan Van der Velde, without gloves, jacket, etc. attacked at the start of Gavia and would be first to the top.

From Maglia Rose by Herbie Sykes:

<<If riding the Gavia in a blizzard is a masochistic undertaking, descending the thing is horrific ……. Horribly steep, badly “paved,” and full of craters. It is a cyclists worst nightmare in the cold, let alone in sub-zero temperatures. The plunge, a hideous, terrifying lottery made worse by the fact that it was impossible to generate body heat, would see Van der Velde, hysterical with cold and fear, stop at the first hairpin. He would lose 48 minutes in the final 27 kms >>

Hampsten and the stage winner Breukink – unlike most of the peloton – admirably descended. Two solid time trials later and Hampsten was a Giro winner.

Here is 2008 interview of Hampsten discussing the Gavia “snow stage.” Here is a very a recent Sports Illustrated article. And here is a brand new Hampsten interview at bicycling.com.

You may need to follow the video link to youtube, but this short Gavia video by the Giro organisers is great:

If the 1988 stage is the best remembered Gavia stage, its first Giro appearance (1960) warranted a chapter entitled “The Stage of the Century” in Sykes book. A new Italian hero loses stage with three punctures on descent, Anquetil loses the Giro with rumours of cycling henchmen hired to hold him up. Polemica.

More here or read Sykes book for a better narrative.

Gavia was part of the route removed (along with Stelvio) in 1984 due to weather. Famously, Laurent Fignon would protest that the weather was fine and the route was altered to prevent him winning Pink (and beating an Italian).

In 1989, the year after the blizzard stage, Gavia was again removed at the last moment from a stage.

As Daniel Friebe discusses in his Cycling Climb bible “Mountain High – Europe’s 50 Greatest Cycling Climbs” – as Race directors became nervous of including Stelvio and Gavia in the Giro due to weather risk, a silver lining emerged as the nearby Passo di Foppa (Mortirolo) was first identified as a nearby — but much lower — alternative climb.

The Patron Saint of Cyclists

At the summit is the Rifugio Bonetta. Built in 1959 and (I believe) still managed by the Bonetta family. Weary travellers are welcome. It has 37 rooms, a bar, good food, and loads of snowy Giro photos 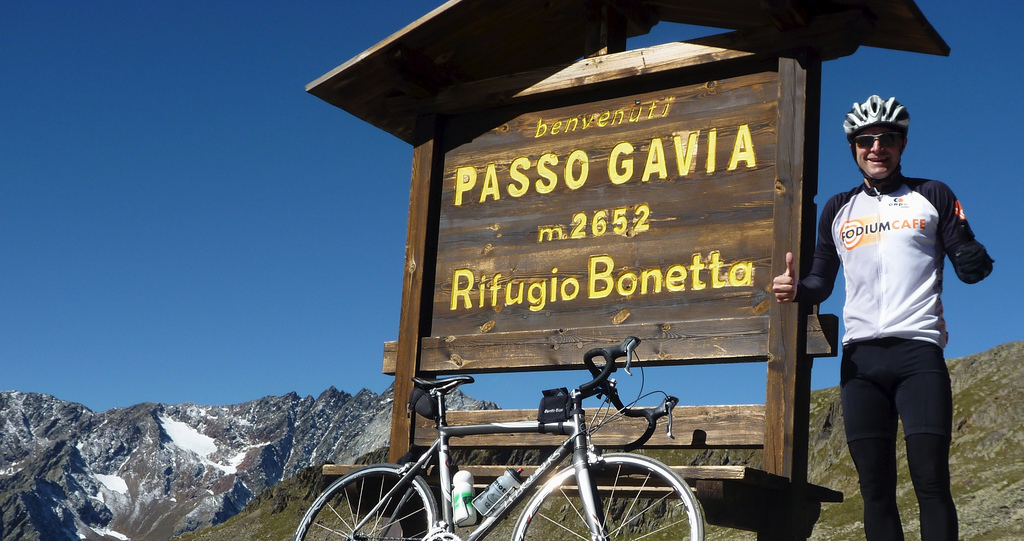 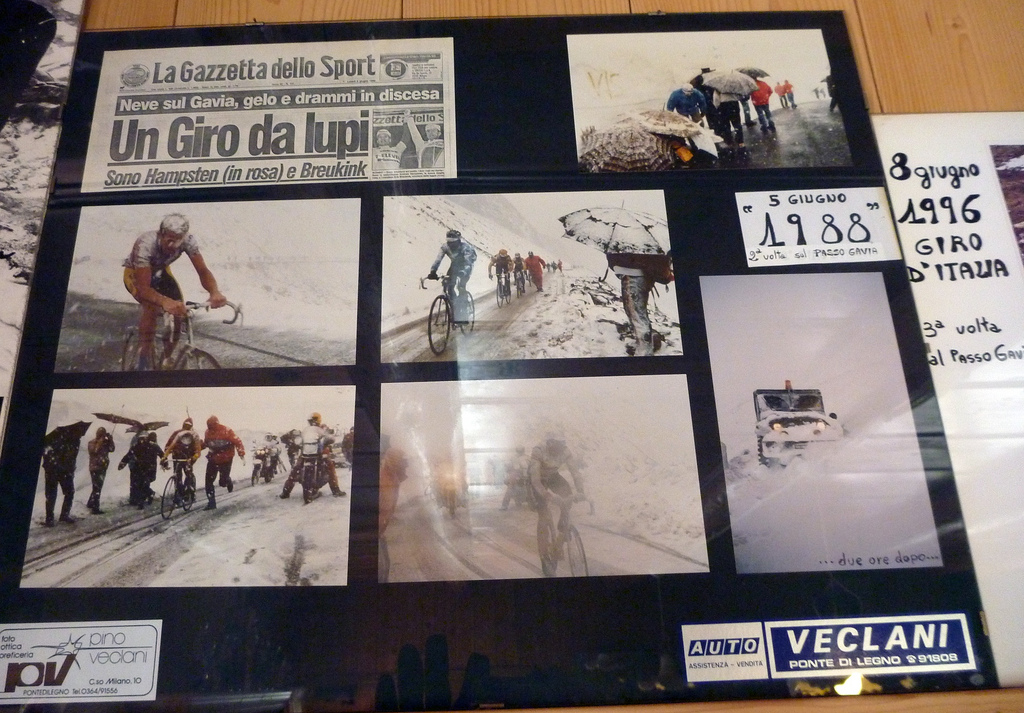 For a detailed trip report (profiles, maps, photos, etc) of both sides of Gavia see my blog post here