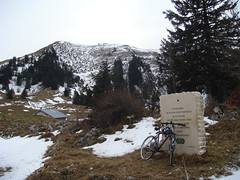 Since posting my map of Jura mountain cycling climbs, I’ve had two conversations regarding this route above Farges.

I told one of my cycling partners Barry that I had climbed it a few years back, but after some discussion with Gilles here, I realized I did not know the top of the route – and it’s not in my Altigraph cycling climb bible.

So on a dark, but not too cold day, I decided to investigate.

I parked in Chancy, the very Western tip of Switzerland, by the Rhone river so I’d get the complete climb. The real climb starts at Farges on yet another beautiful, virtually car-free Jura road to no-where, with ever-improving views of the distant Alps.

Yes, it is possible to climb using a road bike, but at about 1,100 metres the road gets pretty poor. And at 1250 metres, to go higher requires a Mountain bike. 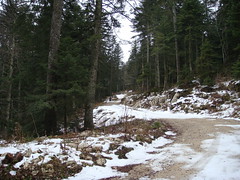 At about 1,250 meters the paved road ended and I ran into snow. I wasn’t sure where the actual Col was, but decided to explore. I hate to climb a Col and not find the sign at the top. At the parking lot, on the right by a Forest sign, I found a wide, good quality gravel road and continued to climb. There was a fair bit of ice and snow so it was slow going.

After a while i realized I could see over the other side of the Juras into the small Menthieres ski-station. A bit further and Voilà, I found a the Col sign (follow the signs for Chalet du Sac).

It looks like it is possible to Mountain bike down the other side into Menthieres. Maybe next year a giant loop returning by the Col de la Faucille or Col du Puthod? Great ride and FREEZING descent. 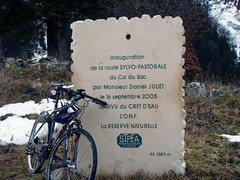 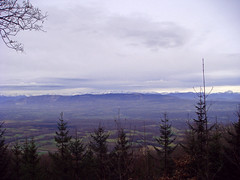