On beautiful sunny days like this I often get a little too ambitious.

I have climbed the Col des Glieres from the west side a couple of times but never from the East. Both are beautiful, challenging, quiet climbs leading to the Plateau des Glieres.

As I drove the short drive to the start at Le Petit Bornand – it was clear that the snow line was lower than I had thought – I almost changed plans – but nothing ventured nothing gained.

Plateau des Glieres was the location of one of the biggest battles between the French Resistance and the Nazis in World War 2. There is a well done hike detailing the history. Click here for a Wikipedia link with more info on the history of the Maquis des Glieres. Maquis – meaning long brush or scrub – was the nickname for the French resistance – as they would often disappear into the Maquis to hide. 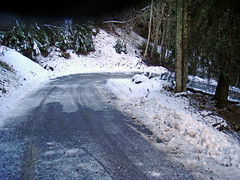 This is as steep a ride as you can find on paved roads with several kilometres averaging 12% – one even has a flat part and still averages 12% – do the math!

At about 1,000 metres (the top is just over 1,400 metres), I started to run into snow and ice on long stretches shaded from the sun.

My tires were slipping and I considered turning around – but I promised myself I would descend the crazy parts by foot – so I continued.

I figured I was going slow enough uphill that I couldn’t hurt myself slipping, and while it was getting colder and icier, I was making progress.

Nearing the top, I found the sun again – it was warm! The Plateau itself is beautiful – the cross-country skiing trails were already groomed and I saw two skiers, but the last – not steep part – to the Col sign was in deep snow (green part of Elevation chart), so I took a few pics and turned around.

This was the slowest descent of my life – treacherous. And keeping my word to myself, I jogged about two kilometres – just too silly to risk crashing.