For me, this is the most beautiful cycling climb in the Alps. Magical.

Colle del Nivolet is a gigantic climb in Piemonte, Italy in the heart of the Parco Nazionale Gran Paradiso. It was built between 1953 and 1963 to service the two hydroelectric dams up high. The national park, along with the Vanoise National Park (the connected French side of the highest mountains here – think Col de l’Iseran), make up one of the largest protected natural areas in Europe. Apparently the wild ibix here migrate between the two countries.

See here for the 10 highest paved cycling climbs in Italy

The first time I cycled Nivolet I started in Locana 40 kilometres from the summit. But the first 12 kms or so are quite uninteresting on a narrow road, with local traffic, etc. so I skipped them this time. It’s fine if you are touring, just nothing special. In fact you can start climbing 55 kilometres from the summit and enjoy a long stretch of 1% to warm up the legs.

I only had my hybrid with me, but this is of course a road bike climb.

This time I began in Noasca, just before the first steep kilometres, perhaps 28 kms from the summit. Almost immediately there is a 3 kilometre uphill tunnel – with a sign warning of 15% stretches, damn. But there is a way to bypass the tunnel on a fun old road. Just follow the road to the left of the tunnel entrance (see map at bottom) until you see a giant boulder: 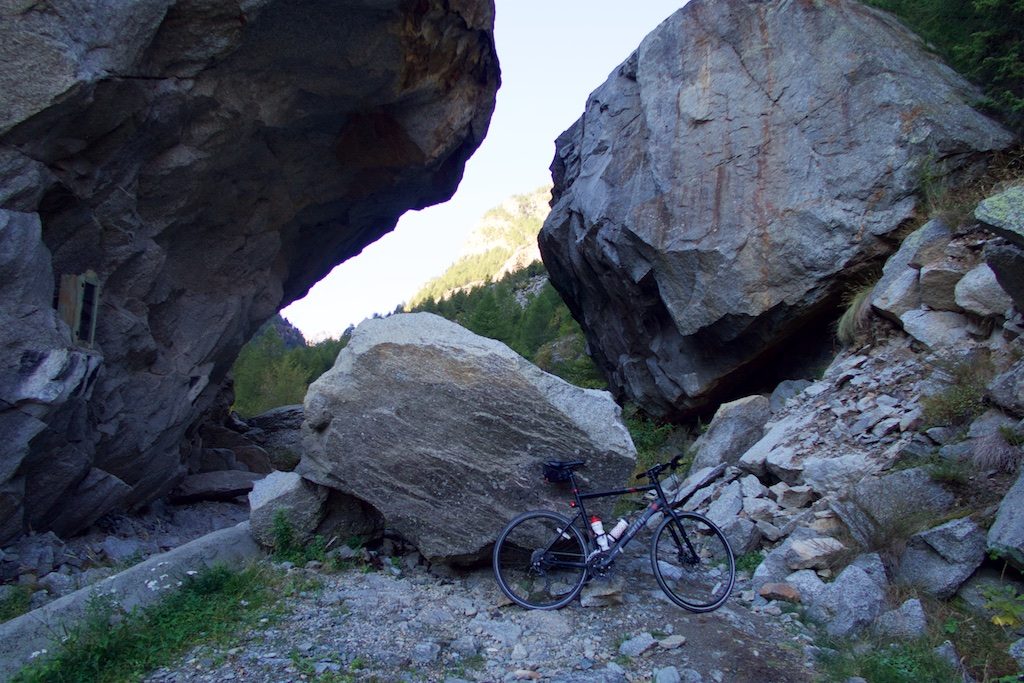 The old road starts behind this boulder – it is paved

Along this old road there are house-sized boulders everywhere – I understand why they built a tunnel. It’s of course bumpy, but it is fine for a road bike. It passes by a scenic gorge, and is far more enjoyable than a long, uphill tunnel.

Note, after a couple of kilometres you are forced to climb into the tunnel. Just ride for 100 metres and then climb out on the left for the old road again. 🙂 After another kilometre the old road re-joins the main road at the tunnel exit.

Old road has a tunnel too

Next, after a few easy kilometres is Ceserole Reale, the final significant town. There is a huge dam and lake. A hint of things to come. 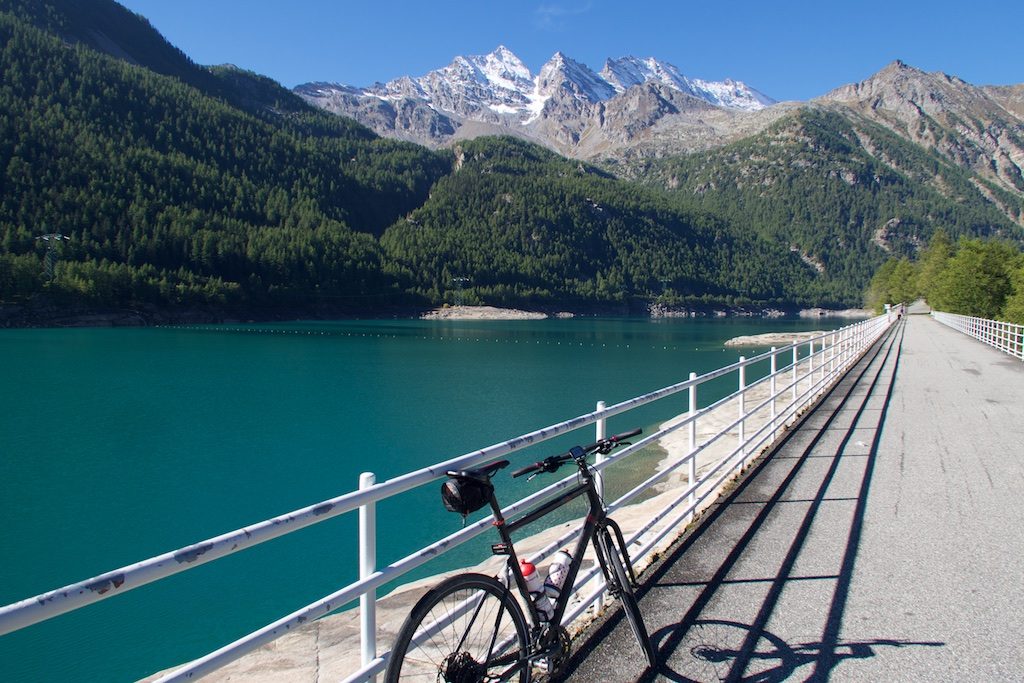 There are a few easy kilometres, and then things becomes truly special. The toughest part of the climb is the 5 kilometres leading to the next dam, all averaging above 9% with hairpins in every direction. 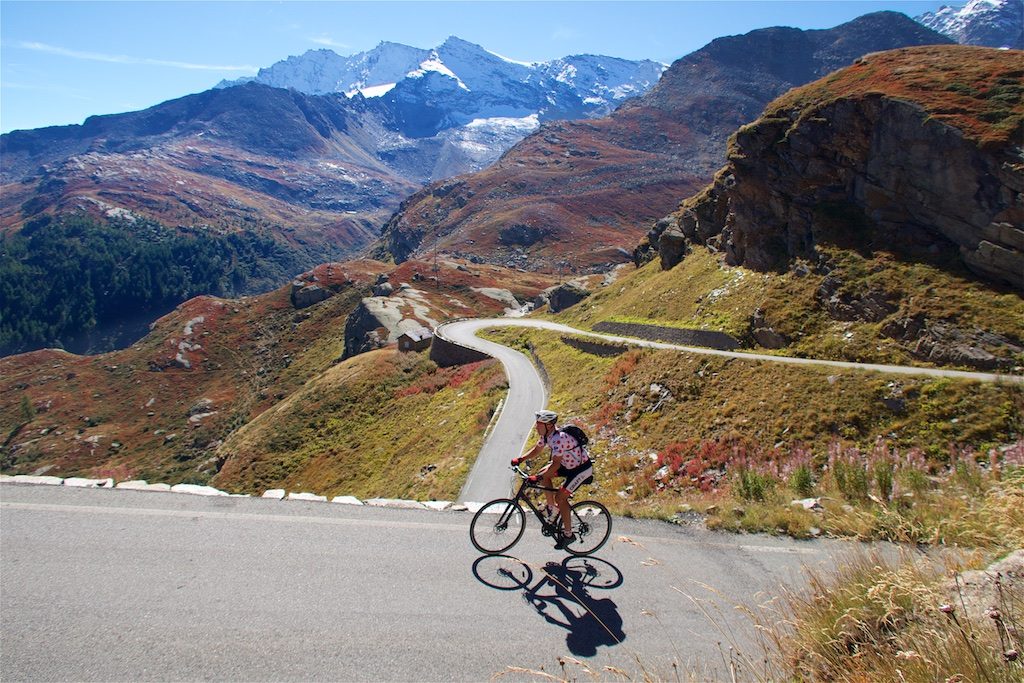 still a long way to go, but getting great

I don’t know what these weed things are called, but things were very red at this stretch: 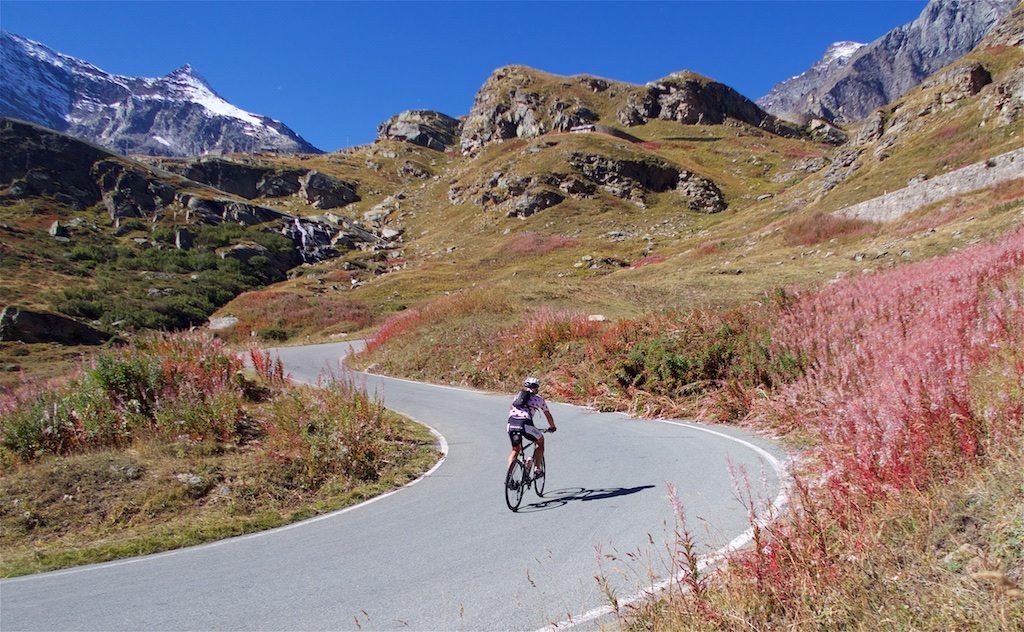 The road goes ride by the big Diga (dam) Lago Serrù at 2275 metres. See the sign in small photo above: from this point the road is closed to motorised traffic every Saturday in summer. Wow, very nice especially considering touring motor-cyclists love it here. 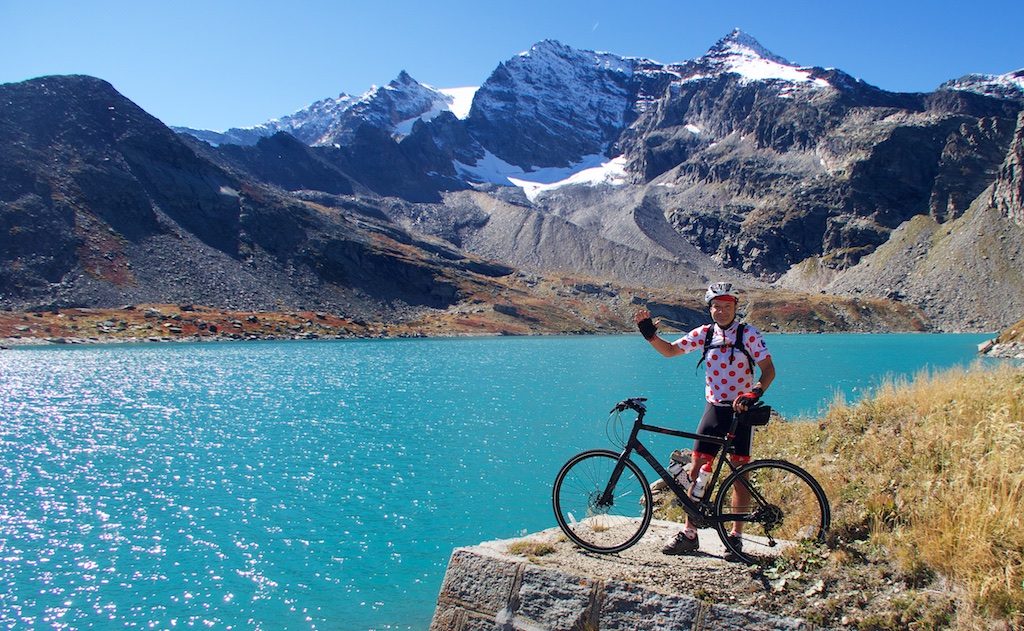 Next the road actually rides across the dam of Lago Agnel (2300 metres). 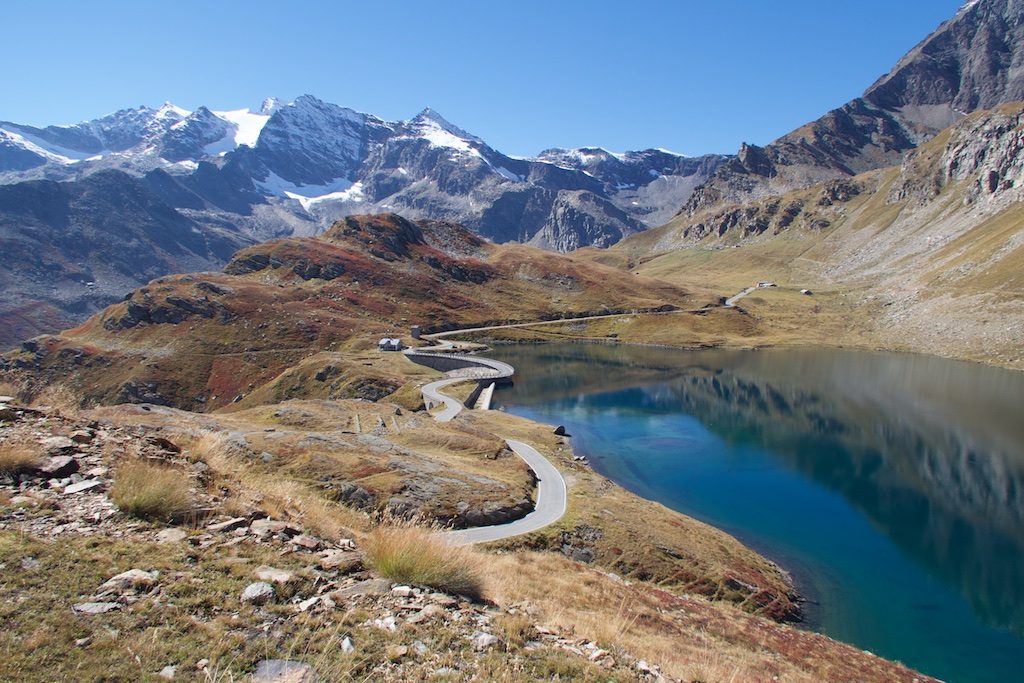 Up to this point, this has already been a memorable, challenging and beautiful climb. But these final 4 kilometres ……. wow. Here’s a close up of the first few hairpins above Lago Agnel: 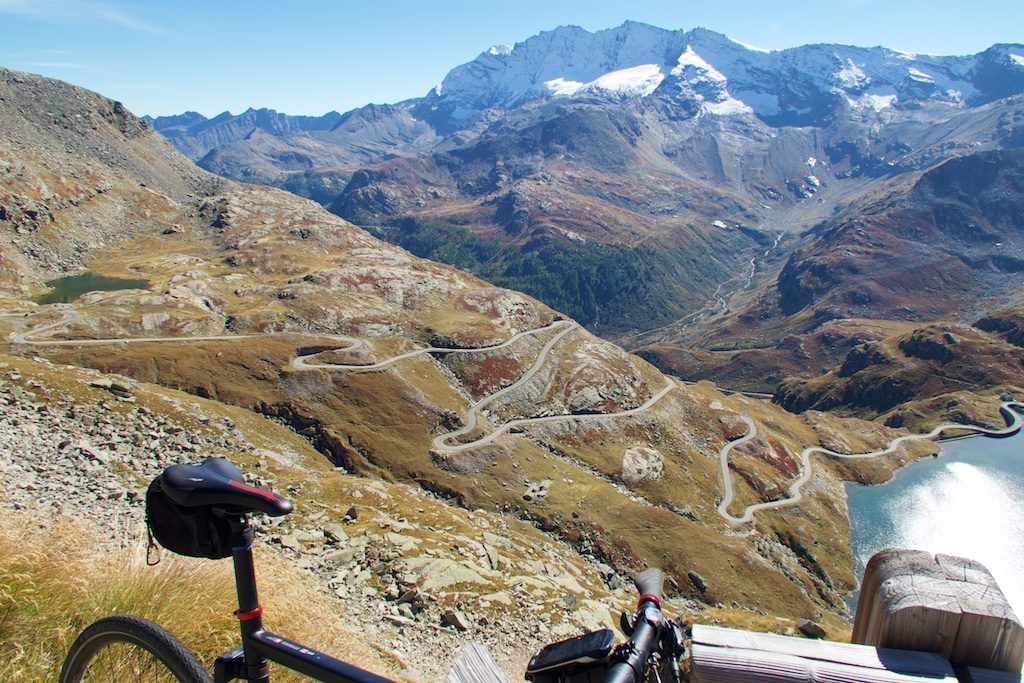 The final few hairpins give ever better/higher views of the two lakes below. Yes, I spent some time scrambling up rocks with my mini tripod. I needed all 30 seconds of my camera’s timer. 🙂 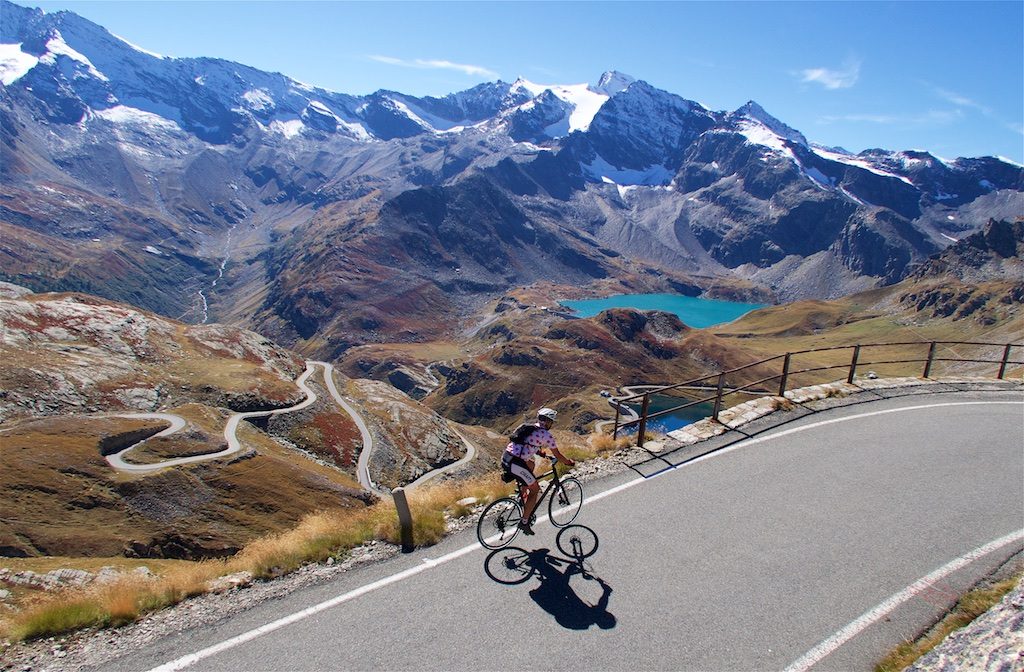 My favourite view from a bike 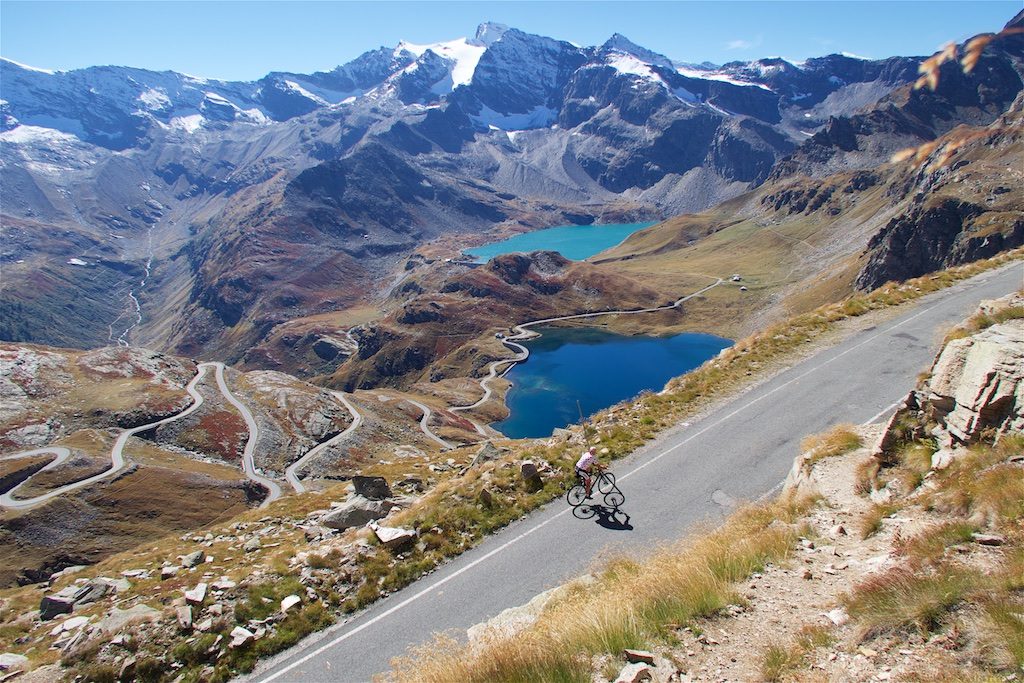 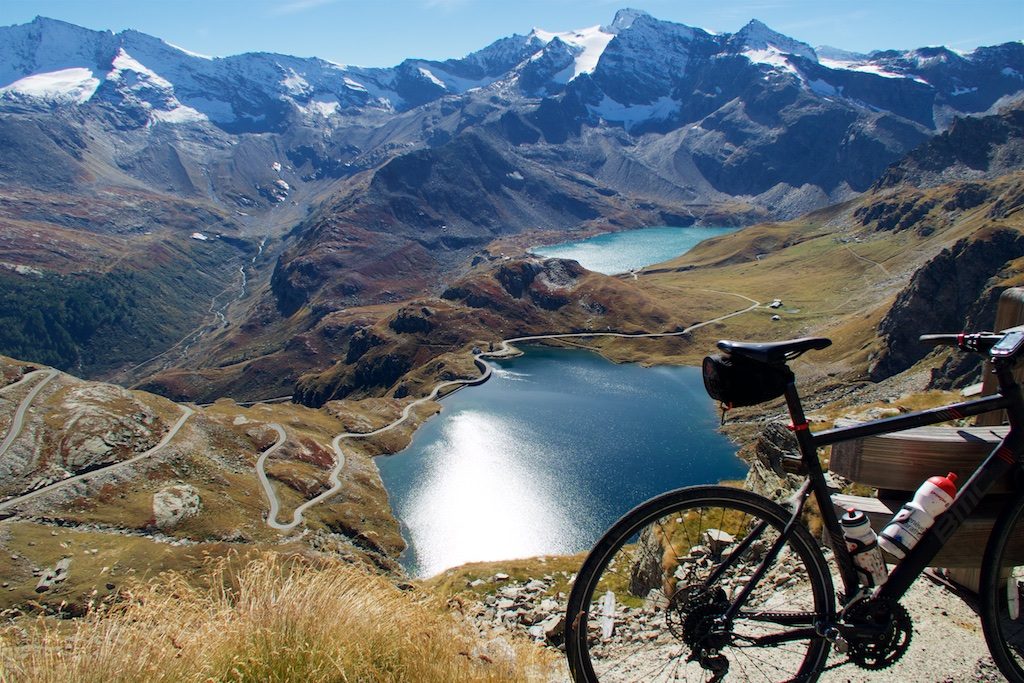 There are quite a few other lakes here and there, including two fairly large ones and a couple of small ones just over the far side called Laghi del Nivolet (Lakes of Nivolet). 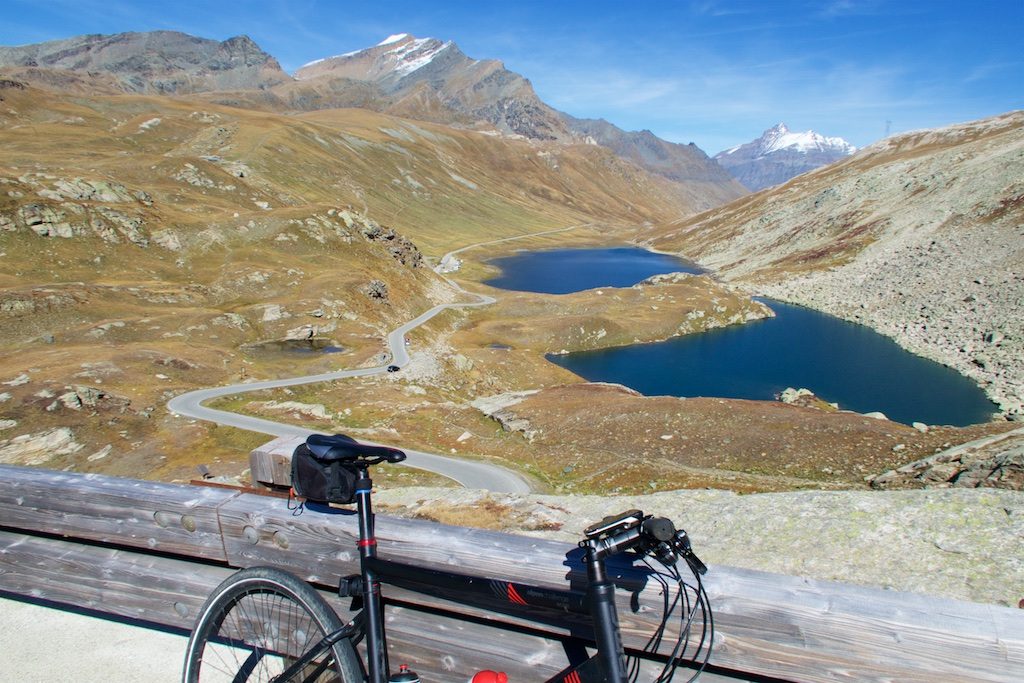 Beyond that second lake the paved road ends but a rough road continues into the Aosta region. It is “possible” to traverse down into the Valsaverenche. But it requires a super steep hike down for a stretch before reaching the village of Pont (1968 meters). I once cycled up to Pont from the very far side and began the hike to Nivolet but I ran out of light and turned back. See here.

Colle del Nivolet has never been in the Giro – I assume because it’s in the middle of a National Park, so it is not as famous as Stelvio, Gavia, or other great Italian roads. But again, for me, it is the most beautiful cycling climb in the Alps.

Near the start of the climb to Nivolet is a fabulous “secret” road to another high alpine dam. Lago di Teleccio. Highly recommended. See here.

Indulge me, a few more photos: