Starting from Col de Montgenèvre, I descended down towards Briançon and over to the start of La Croix de Toulouse. It was closed to traffic on one of the Hautes-Alpes departments’ Cols Réservés days. See here for a full list.

This little climb is fantastic. 6.3 kms averaging 10%, with 29 hairpins (my count), on a tiny little road. I am not certain it needs to be closed to traffic, but the event meant food and drinks at top and bottom and a friendly non-competitive ambience. 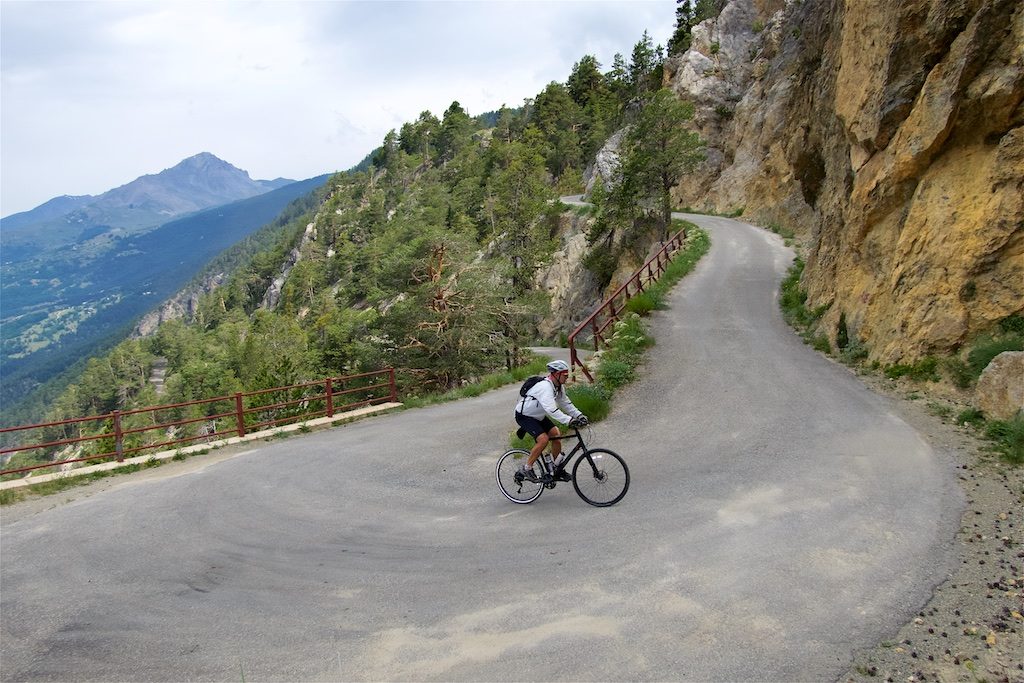 Note, the final kilometre to the look-out is not paved. See photo below.

Col des Gondrans and Above (2529 metres)

Next, I descended through Briançon to the start of Col de l’Izoard. I would ride 3 kms of the north side of this legendary climb (see here for details on both sides of Izoard) before turning left onto an unsigned, poor quality road. I would not see a human being for the next few hours! Note, the profile is just for the paved part of the climb – to Col des Gondrans.

This is an old military road that will pass endless old forts/gun placements/barracks/etc. There would be a few “entry forbidden” type signs along the way (see below), but I decided they looked old, or targeted at cars – and I had a map with an official mountain bike route on it. So I crossed my fingers and pedalled.

It’s a tough, huge climb on what I’d call a “formerly paved” road. At times terrible condition. I was happy to have my hybrid.

It winds up and up. Plenty of hairpins, and views.

Eventually, at perhaps 2250 metres, above the tree line, I reached the top of a ridge and an intersection with military roads in three directions.

Most of the many military ruins here were built in the late 1800s as part of the French “système Séré de Rivières.” Many of the forts including Gondran and Janus – my main goals – were also rebuilt/upgraded as part of the Alpine Line extension of the Maginot Line between World Wars.

I headed towards Fort Gondran when this became my view:

Wow. That is Mont Janus with Fort du Janus atop. I could clearly see a “road” to the summit, and immediately changed my plans and started pedalling towards it.

Crazy fun. I traversed past another bunch of old military buildings and headed up. The “road” is slippery and steep. And my vertigo made me nervous to pedal parts of it. But wow. I am not certain the altitude but the peak is at 2565m, and the sign beside the fort said 2529 metres. Makes sense.

Mont Janus is sometimes known now, and was called pre-20th century, Château Jouan after an old tower on the summit, built by the 18th century French military genius Vauban.

I explored the varied ruins and enjoyed the towering views in three directions.

The fort briefly saw action in June 1940 exchanging fire with the Italians atop nearby Mont Chaberton, days before the French surrender to the Nazis (and thus the Italians). The French guns that knocked out Chaberton – highest fort in the Alps – were sighted from Janus. It was briefly occupied by Italians/Germans and liberated by the Resistance in 1944.

Next I gingerly descended back to Col des Gondrans (2347 metres). It was spitting rain, but I wasn’t too worried, so I made a quick dash up to Fort Gondran atop the nicely named peak Sommet des Anges (2459 metres) – also the top of a ski chair lift.


Exactly from Col des Gondrans begins a road down the ski slopes back into Montgenèvre. I had been pleased to see it looked easily rideable as I was fearing descending all the way back to Briançon and climbing the scenic, but busy Col de Montgenèvre main road.

This was a superb ride. And yes, my favourite part was seeing no-one for hours on the old military “roads.” 🙂