Much of the French/Italian border is up in the high Alps. And along much of this border are endless high, old, unpaved military “roads.” Often leading to old forts, bunkers, etc. Usually/often these were first built in the late 1800s, although many were updated / manned in WW2.

The upside of this militarism to a peace-loving modern-day Canadian cyclist like myself? Endless great opportunities to get very high in beautiful, deserted surroundings. 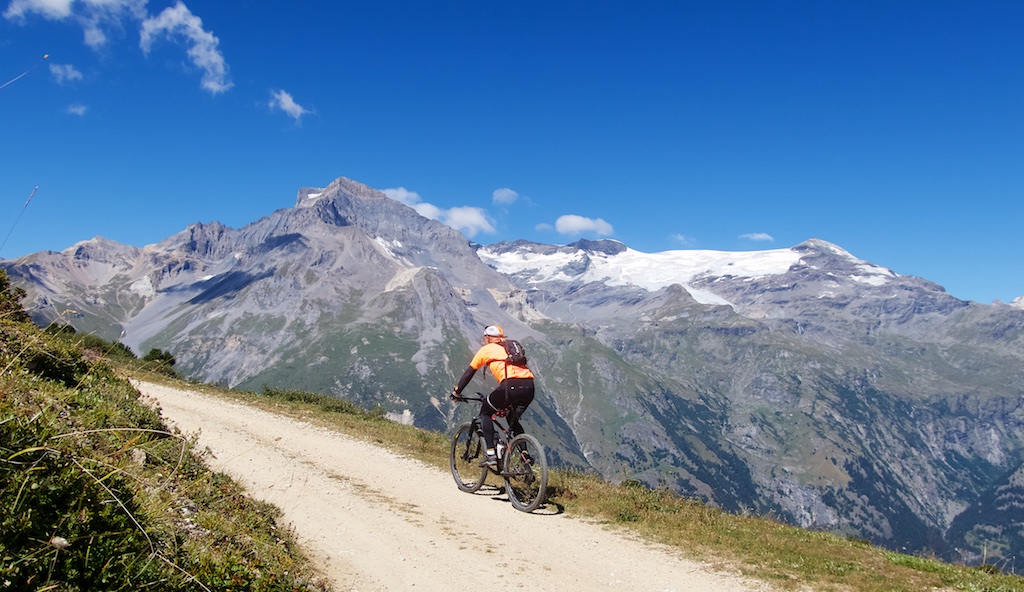 The 3D video is pretty good:

I’ll maybe do a post in the “off” season” about my favourite high old military rides – and some future ideas. But here are a few of the highest/best (all on/near France/Italy Alpine border): Mont Chaberton, Jafferau, Assietta/Finestre, Col de Tende, Alto Piano della Gardetta, Fort Janus,
Above Pt. St. Bernard, etc.

Today’s ride was to another old fort atop Mont Froid. This is one of many military installations around/above Lac du Mont Cenis.

The border was moved in this region after WW2 (the French took the entire lake and beyond), but Mont Froid was a strategic placed French Fort and saw some action at the start and end of WW2, even changing hands twice in April 1945 just before the German retreat from the region. See photo of memorial plaque placed at 2819 metres lower down in this post.

Starting from Termignon in the Haute-Maurienne, the route is gravel almost from the start. It’s full of hairpins, but of decent quality and rarely crazy steep. The climb is in a forest until above 2000 metres but even here and always above, I enjoyed fabulous views of the glacier across the valley.

At roughly 2500 metres, the route enters a sort of cirque/amphitheatre. The road continues in a semi-circle high along one side. It’s crazy fun. The route changes from a “road”, to a good quality, wide trail. But always rideable. 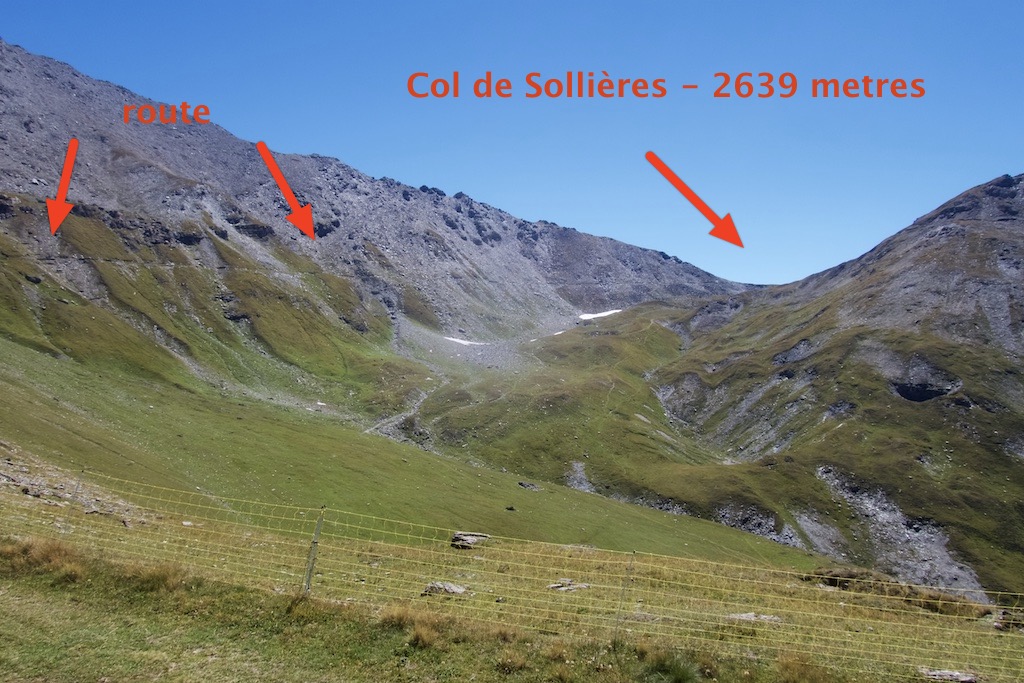 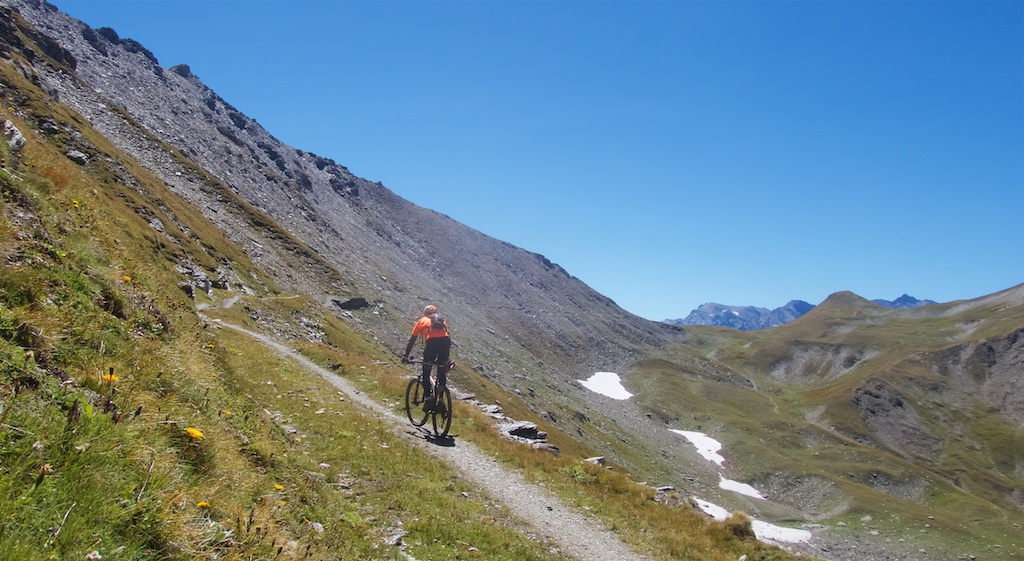 At Col de Sollières one starts to more old military ruins, mainly barracks, I think. I would descend directly the other side, but first I continued higher. The road is rideable until the old barracks at Col de l’Arella (2685 metres). Directly above is Fort du Mont-Froid. I saw hikers atop, so I decided to keep going – but this required bike-pushing. The summit is a long narrow ridge with old military structures at both ends and a commanding 360 degree view. The ridge itself was surprisingly rideable (see top photo and below):

At the far end is the highpoint at roughly 2820 metres with a giant cross, great views, and a small plaque commemorating the 1945 fighting here. 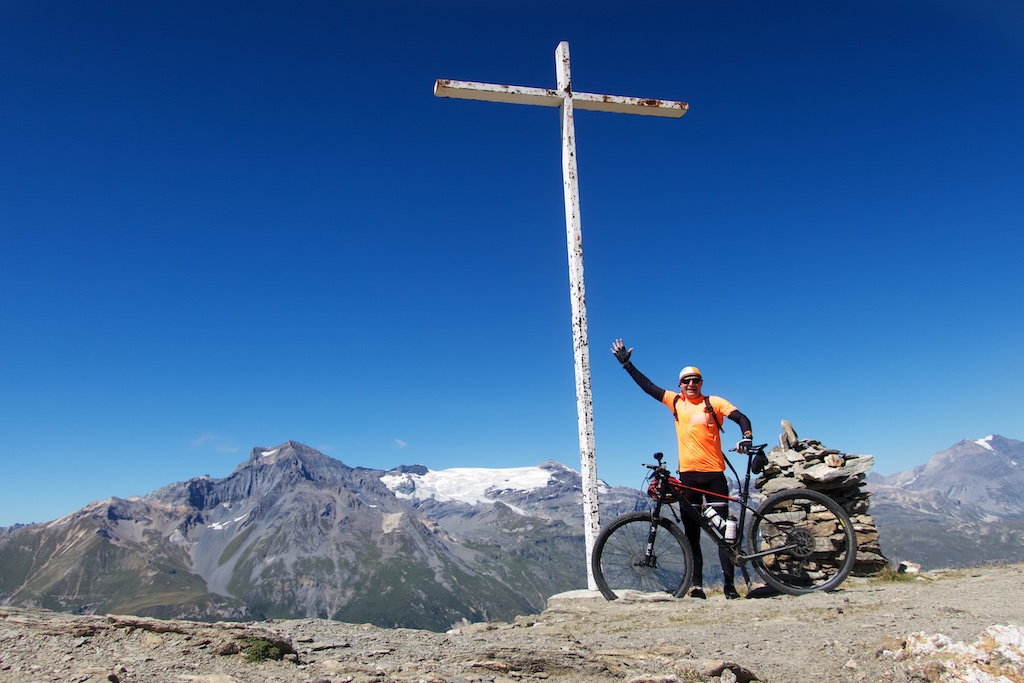 I definitely did this ride in the correct direction the side I climbed was always rideable. I double-backed and descended from Col de Sollières for several kilometres on trails that it would be hard to pedal up.

I then descended to the Lake and then climbed the short distance to Col du Mont Cenis. Looking back, beautiful:

But the fun wasn’t over yet. Instead of taking the paved road down, just below Col du Mont Cenis, I turned off onto an unpaved road. First quite difficult, but then flatter as it traversed to my early unpaved hairpins. This entire ride was near deserted, but I was struck by how many August tourists were along the paved stretches. Hikers, drivers, motorcycles. So this quiet alternate to the paved descent was an excellent choice.

This is an amazing loop. A reminder of how much fun it can be to struggle up one of the many super-high, old, unpaved military roads in this region.