Here is an unbelievable and little known route that gets higher than any paved road in France and visits several beautiful high alpine lakes. To reach the Col may require snow walking .... even in July.

We were in Val d’Isère for Sunday’s Col de l’Iseran “bike-only” day and I decided to spend Saturday exploring up high and off-the-beaten-track. Here is an unbelievable and little known route.

I started on a tiny easy-to-miss turn-off in the middle of several tunnels beside Lac du Chevril. Just below Tignes and just before the entrance to Val d’Isère (see map below).

Only the first 5.5 kilometres are paved, but even this is worth it for road cyclists as the route hairpins high above Lac du Chevril – beautiful. 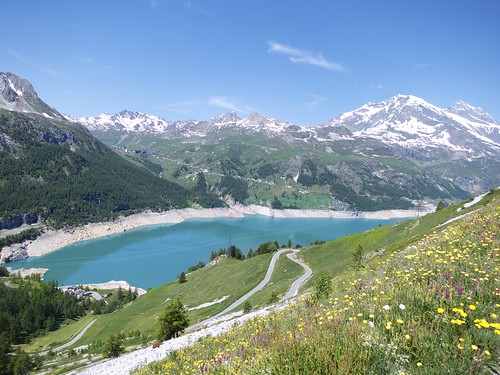 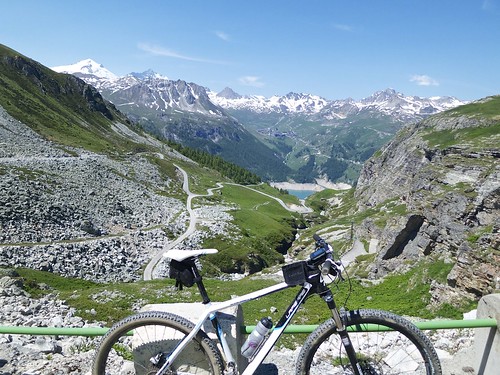 I had my 29er and continued on a good quality unpaved road in a high plateau valley with huge mountains on the left marking the border with Italy. 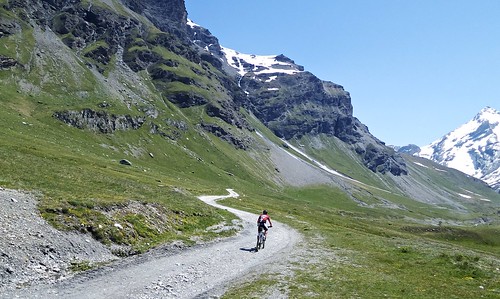 I could see a dam from a couple of kilometres away, and as I approached I hoped that Lac de la Sassière would be “full” and it was. It’s a stunning environment – huge mountains everywhere. I was already quite high as I explored along the side of the lake (2460 metres), but I could clearly see a path climbing up the side of the mountain on the other side. Very tempting.

I crossed over the dam itself to explore and found that it was — quite surprisingly — a fairly wide old gravel road (old military?). I continued up: 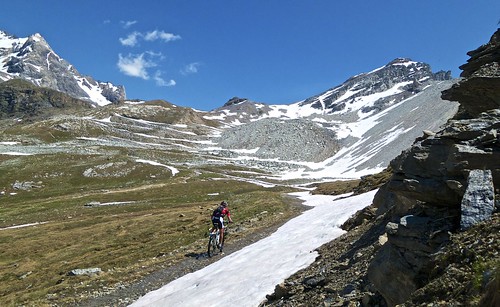 In the photo above, you can see the hairpins higher up. I was surprised that the wide “road” continued even here: 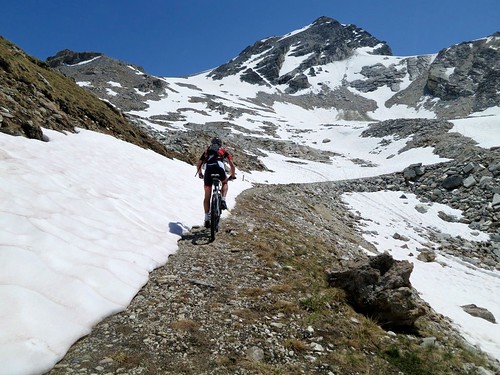 Finally, at approximately 2700 metres, the road seemed to disappear and I followed a hiking trail … mainly on foot but occasionally pedaling: 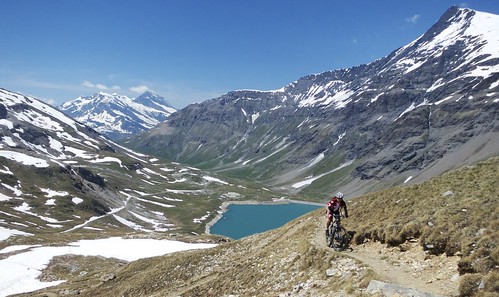 High above Lac du Santel, at about 2800 metres I had to leave the bike behind as the snow got deeper and I only saw footprints on a steeply pitching stretch. 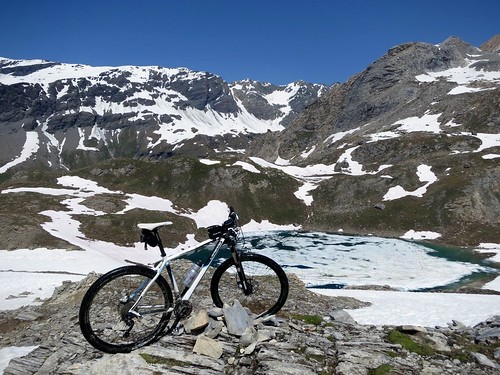 It was too crazy for a bike with all the snow, maybe OK in September. My feet were freezing, hiking through deep snow and through a glacier-melt river or two, but I soon made it (sadly without the bike) to a snow-free Col de la Bailletta (2852 metres):

It was clearly too steep to ride over the top, not to mention too much snow, so I wasn’t too sad that the bike was half a km behind me.

This was a series of great rides. First the 5.5 kilometre paved stretch, then up to Lac de la Sassière, and finally the unexpected extension up to Col de la Bailletta. Highly recommended.