I am a huge fan of climbs to high alpine dams/lakes, and Lac d’Emosson is one of the best. I’ve cycled up a couple of different ways with a road bike – see below, but this route takes an alternate lower-half using a fabulous un-paved trail up through the Vallée du Trient.

The route starts up a cliff road that can easily be seen from the Valley below – near Martigny. The first 10 kilometres are on a well surfaced, big road that – while quiet enough – definitely has a steady supply of cars. Initially it climbs up some great hairpins before heading deeper into the Vallée.

Two alternate routes to Lac d’Emosson: I could have made this a loop by returning to Martigny via Col de la Forclaz. Another road bike option is to start in Chamonix and cross Col des Montets.
The unpaved – gravel – stretch starts immediately after exiting Le Trétien – pay attention here: ignore the descending paved road and follow the mountain bike signs. It’s only for about 4 kilometres, but it’s the only way to link to Finault from here. It’s a fabulous stretch, with switchback after switchback – very steep at times. 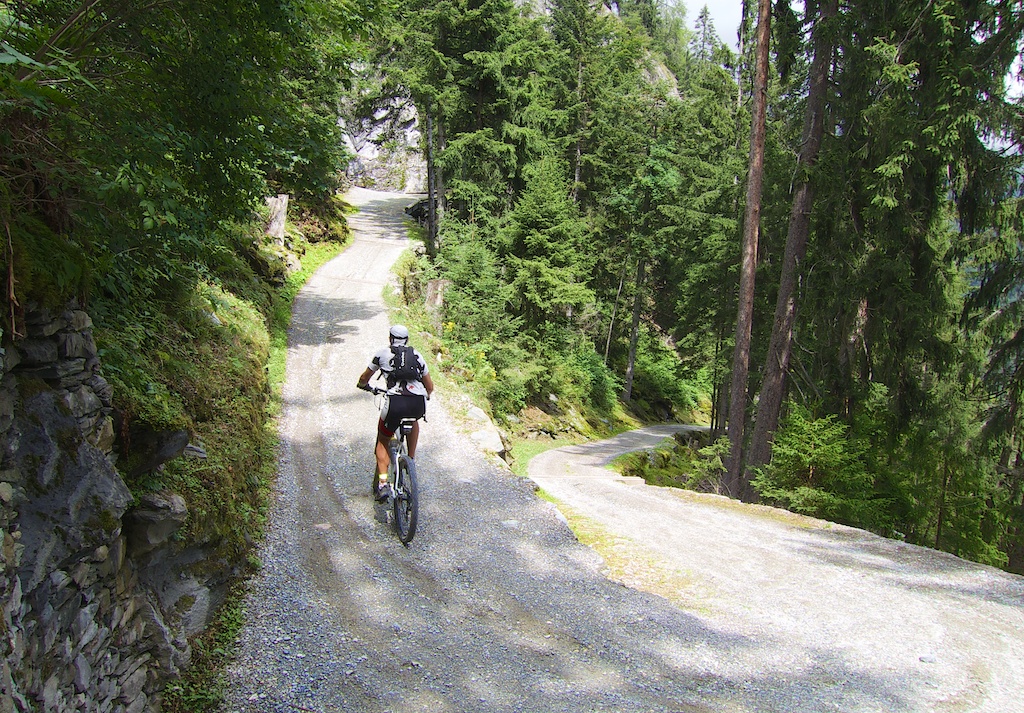 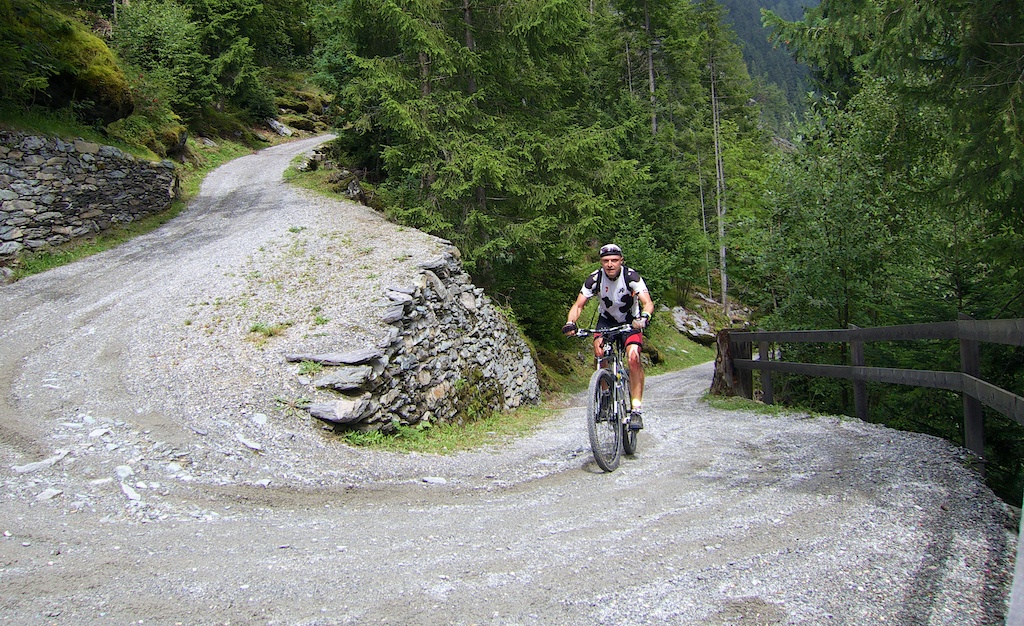 Near Finault, the route rejoins the main paved road up to the Barrage (dam) d’Emosson. It’s seven very steep kilometres to the lake. The clouds blocked my views of Mont Blanc, but it’s a beautiful climb. 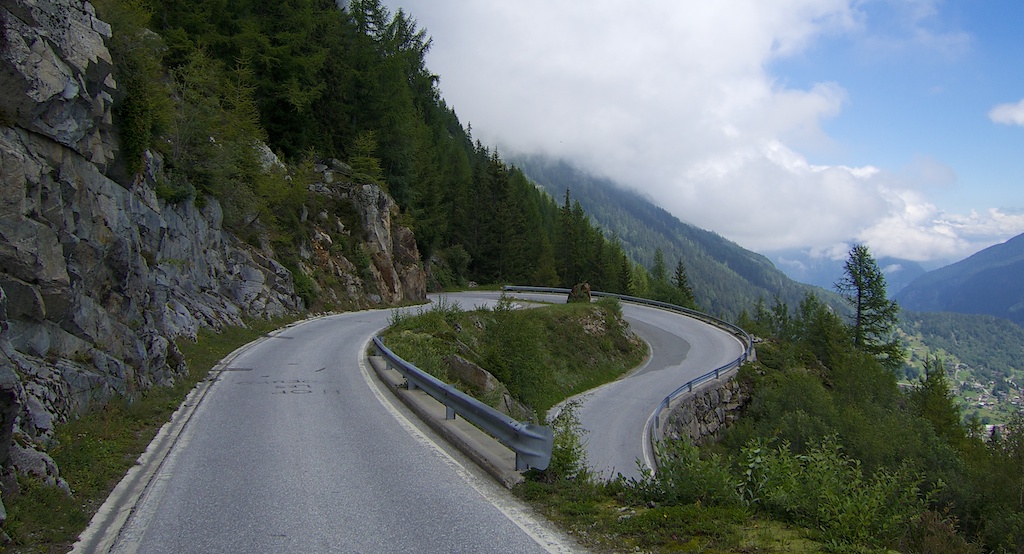 At the main dam/lake is the signed Col de la Gueulaz. There is a truly amazing little road on the far side of the lake that heads up much higher to a smaller dam and lake – see the second ride link above, but currently there is construction going on and I got yelled at to turn around as I tried to cross the dam. Damn!

Vallée du Trient
Luckily, I had another idea for a little extra adventure. Just below the Col, before reaching the lake/dam there is a long tunnel that allows one to reach the upper side of the lake – see map below. I am a tunnel-coward …. but I held my breath and plunged in. 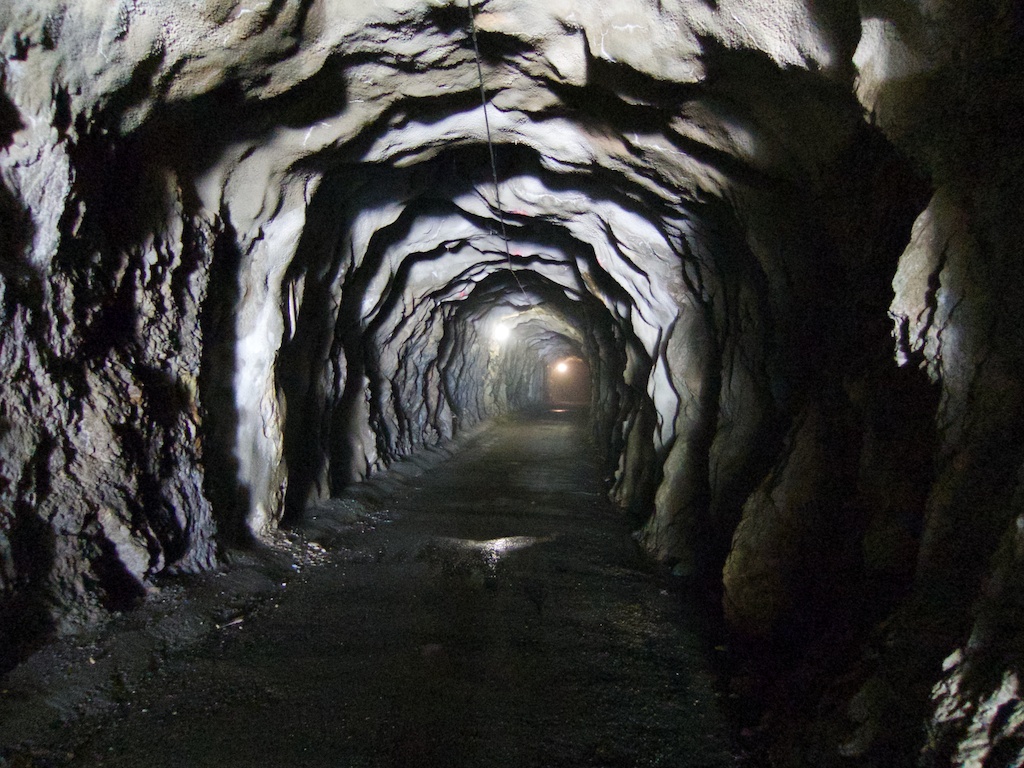 Exiting the tunnel, I found myself with fantastic views of the dam. 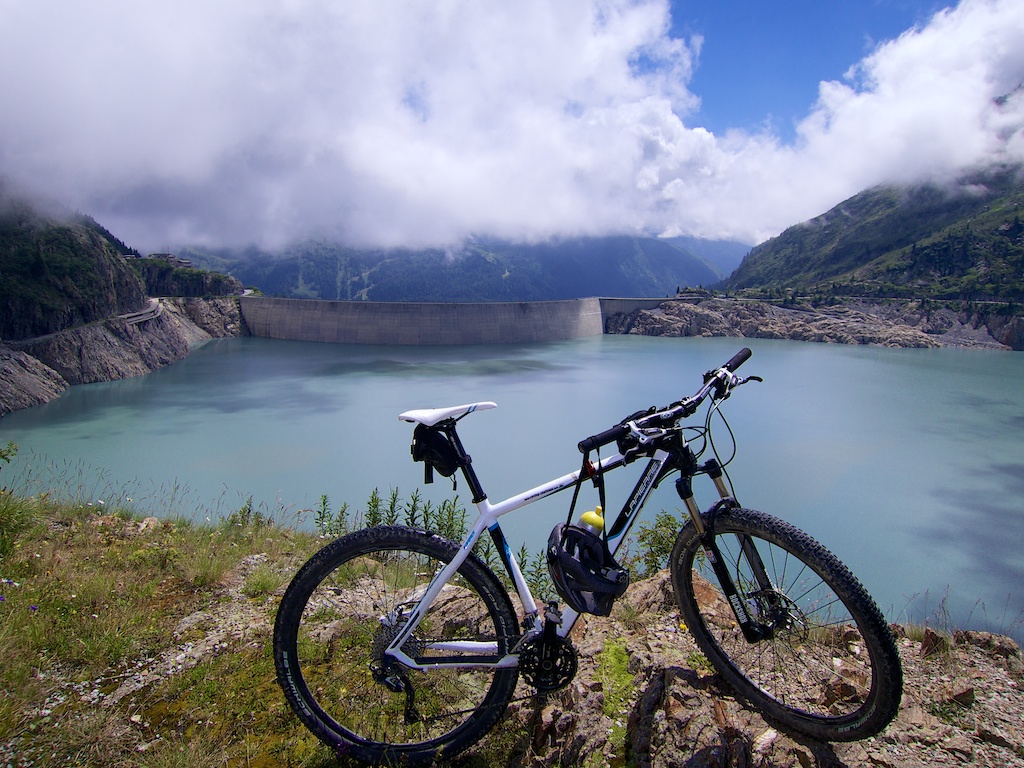 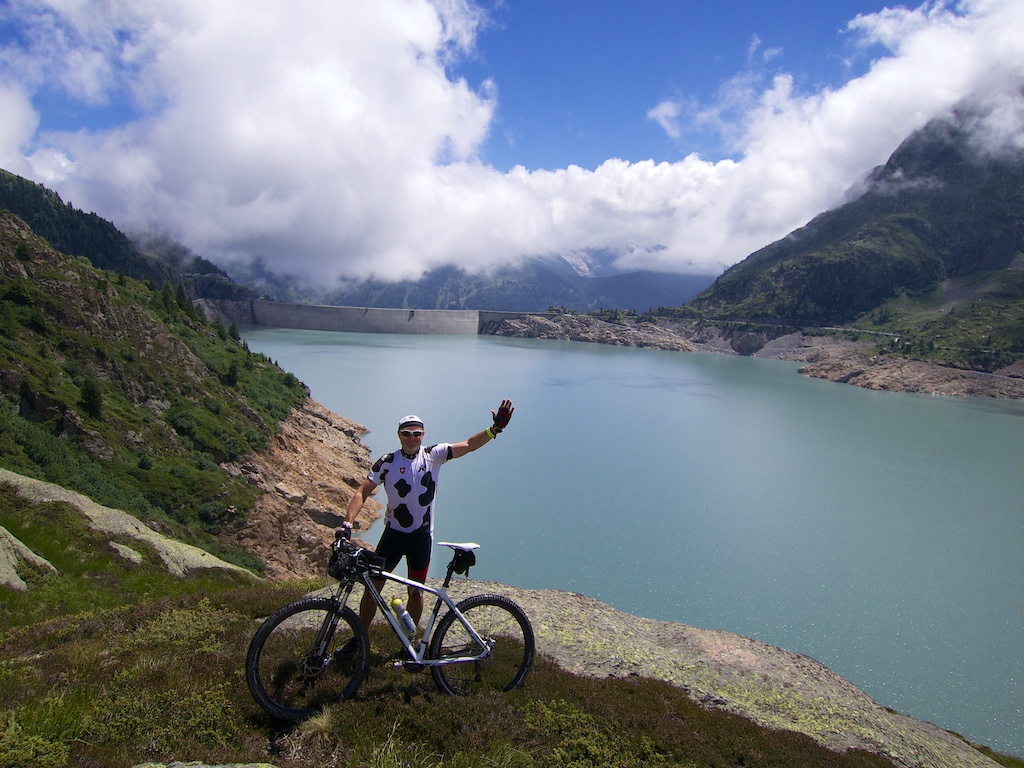 I continued further along to the see the back side of the lake. 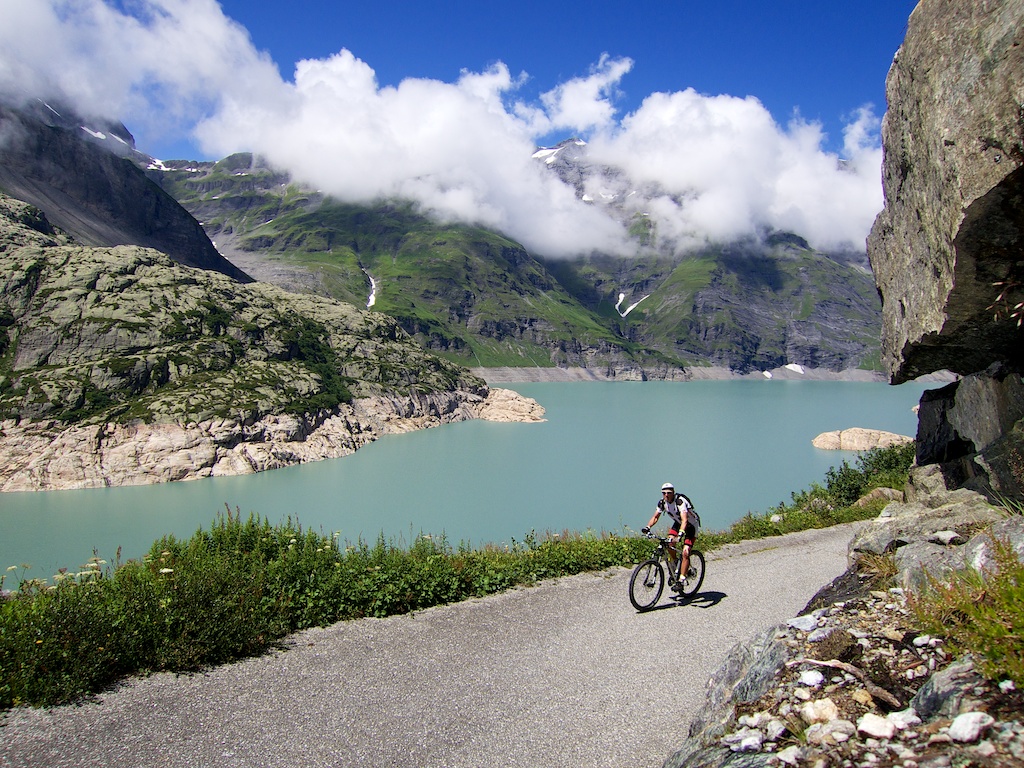 It’s a dead end soon – but well worth braving the tunnel.

I had planned to return to Martigny on the main road over Col de la Forclaz – link at top of post – but my old legs were tired, so I just enjoyed the long descent back the way I had come. 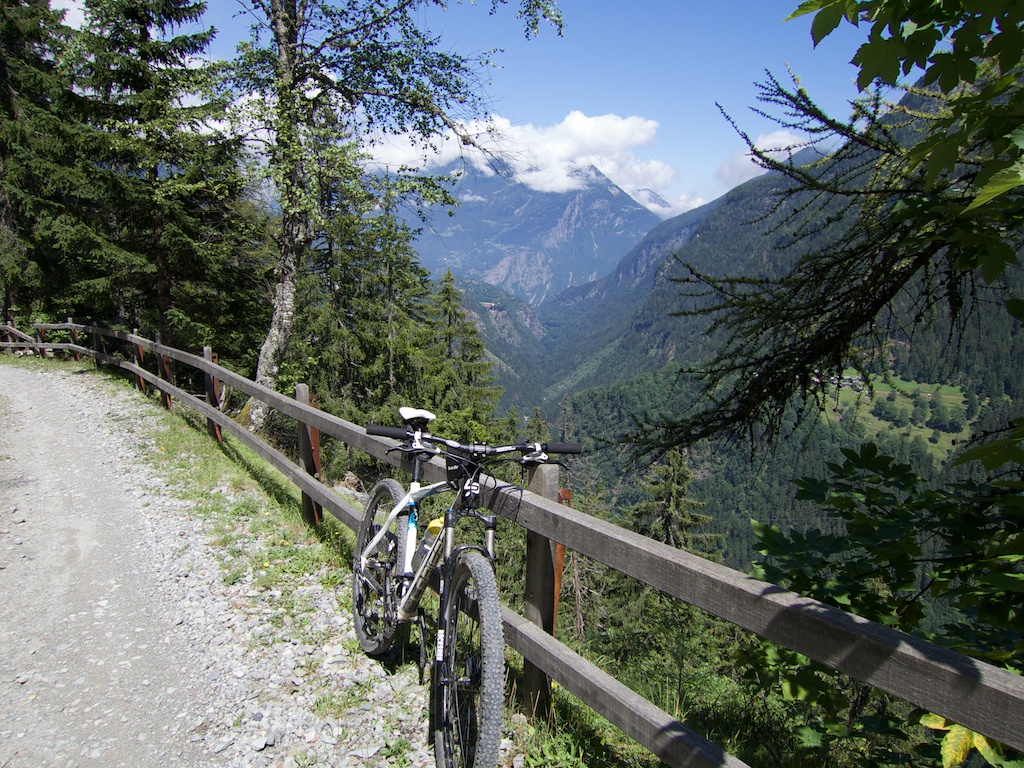 A very fun alternate route to the beautiful Lac d'Emosson with a superb middle section on an unpaved trail. Braving the tunnel to access the far side of the lake is worth the effort.