Since my diet only started yesterday, I was not too worried as I had plenty of fat stores to live off. But today I got pretty lost in snow-filled woods. 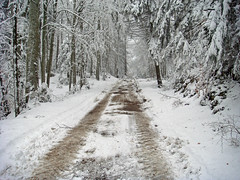 I had decided to climb the mountain behind me to see some snow. I took my usual route up Le Saleve – behind my house, running into the white stuff at about 800 metres (2,700 feet). The plan was to stay on-road but when I passed by the mountain bike shortcut (at 1,000 metres) a snow plough drove out of this non-paved route – sweet!! – or so I thought. 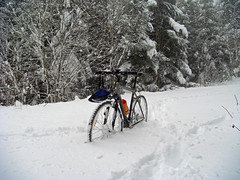 As I slowly climbed this steep path the snow began to get deeper. After a while the ploughed part stopped. Not sure why, but I kept going – but hey I am a guy. Riding soon became impossible and I walked/jogged.

I started getting a little confused where I was and decided to follow a trail made by cross-country skis. This went through thick woods so i turned onto a little forest logging road. And I kept walking, slowly getting higher. And walking. And carrying my bike.

After about 45 slow minutes I got just a little nervous as my feet were cold and wet – but then voila I bumped into the main road – nicely ploughed.

It was pretty foggy, so I hoped that climbing a little further would find the sun above the clouds – and so it did. It’s the best feeling to find sunshine when it’s depressing and grey down low.

A cold descent into a cold north wind left my wet feet, pretty cold – and a little numb. Fun ride but unploughed trails means a U turn from now on. 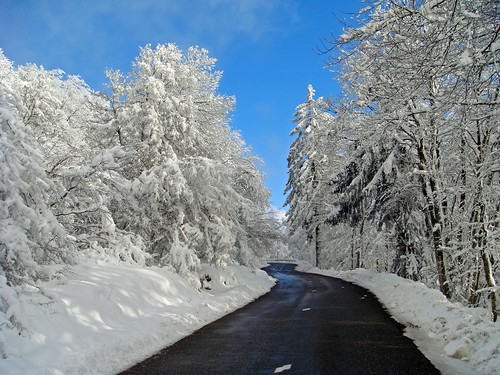