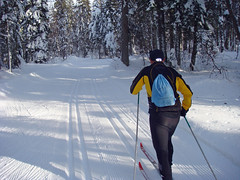 I grew up cross-country skiing with my father in Canada. Somehow, I took a 25 year break from the sport. But with the coldest winter in years and icy roads, it seems like the time to restart – and a better option than biking.

And Doreen gave me new skate skis for Christmas! 😉

I have been out 5 times. It is truly an amazing workout. Unlike cycling, it uses the upper body and to a lessor degree the torso, making it amazingly simple to get the heart rate exploding.

I am new to skate skiing and it is a lot harder than I expected. But my technique has improved from awful to almost mediocre. Progress.

Here are quick details on three fantastic Cross-Country ski centres all within an hour of Geneva. They are all at altitude and frequently are bathed in sunshine while the Geneva basin is overcast and depressing.

Link to Google Map with all 3 Locations 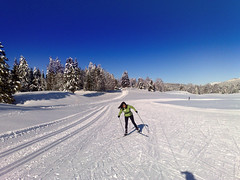 This is a huge centre – with about 80 kms of groomed trails.

There are two sections with trails of all levels in each. One part leads to the open plateau on the top of the Juras and actually briefly crosses into Switzerland near La Dole peak. The other follows great trails through woods around Puthod and Col de la Vattay.

Skate skiing is difficult. Private or small-group lessons can be booked at La Vattay with the ESF. 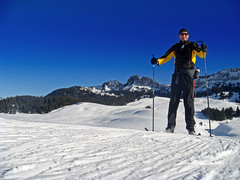 Access: Alps – steep road up west side via Thorens-les Glières

This is the smallest of the three, with about 25 kms of trails – but perhaps the most beautiful.

The entire Plateau is surrounded by mountains and one of the pistes leads to a Mont Blanc Panorama.

As I have written before, this was a famous base for the French Resistance in World War 2 and there is a huge monument and small hike with signs giving the history.

In winter, you must access the Plateau via the West side via Thorens. This steep road is well cleared/maintained and leads to a large parking lot near the ski center. The East side from Petit Bornand is often ice covered and closed. 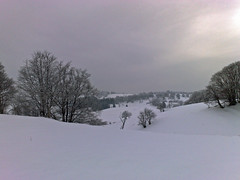 Rentals available: Not sure

This is easily the largest of the three with more than 150 kms (!) of groomed trails. It has three entrances at Col de Cuvéry, La Chapelle, or Les Plans d’Hotonnes.

I found even a blue loop here fairly challenging and the Blacks look really difficult.

There is a trail that advertises panoramic views of Mont Blanc – but it was a little overcast the day I was there.