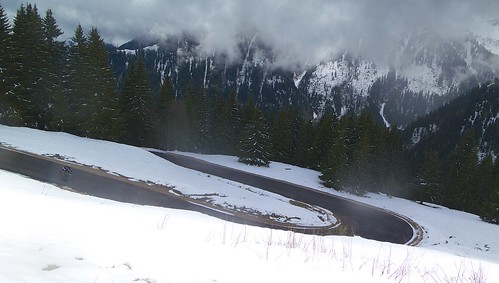 Like the celebrated Col de Joux Plane, Plateaux des Saix starts in Samoëns. While it is far less known – in part because it is a dead-end – it shares similary stats with Joux Plane but is in fact quite a bit more difficult.

I last rode it in 2008, and I complained about the road surface, but it’s in good enough shape now. The summit is also called Samoëns 1600, and is part of the Grand Massif ski domaine (Flaine, Les Carroz, etc).

As the profile shows, after the first 2 kms, it’s hard work. With three consecutive kms at 11% average, ouch!

Everyone has been complaining about the never-ending winter. But, I decided to trust the weather forecast that the seemingly daily rain wouldn’t start for several hours, and I felt pretty good on the steep slopes.

The last few kilometres were covered in new snow, but I kept dry and enjoyed myself even if the usually spectacular views were clouded over. 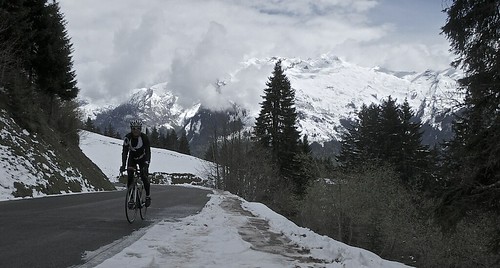 Joux Plane is still closed, so after descending I decided to visit Cirque du Fer à Cheval at the far end of the valley.

It is a stunning amphitheatre of mountains similar to Cirque de Gavarnie in the Pyrenées. It is perhaps 300 metres of ascent but it’s not at all steep, and a popular cycling route. There is a loud river beside the road that has white water rafting. Plenty of cliff waterfalls, etc. It’s truly a special place. Note, one can get further into this beautiful site by hiking or mountain biking. 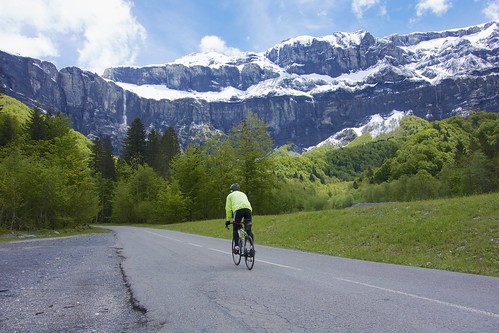 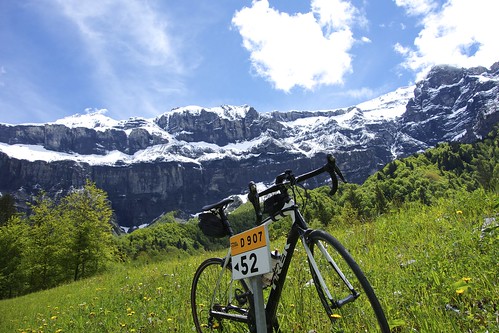 Highly recommended location to visit – with or without a bike.