Trending
You are at:Home»Alps»Austria»Rettenbachgletscher: The Tour de Suisse Challenge

This year, the Tour de Suisse has four stages with an amateur cyclo-sportive riding the route before the pros. Today I participated in this “Tour de Suisse Challenge” – cycling up to Rettenbachgletscher. Not an easy climb. Ouch: 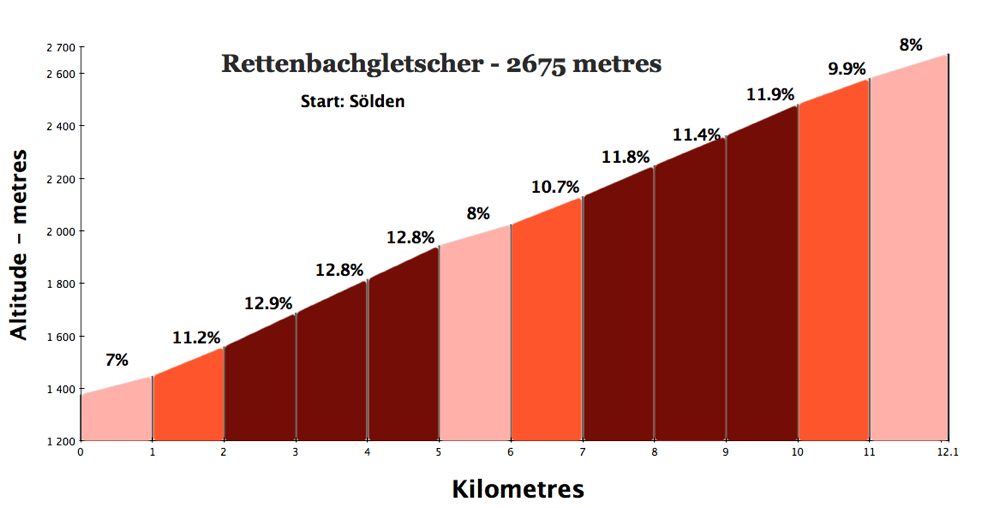 This was my first time ever cycling in Austria, but upon arrival it felt like home: 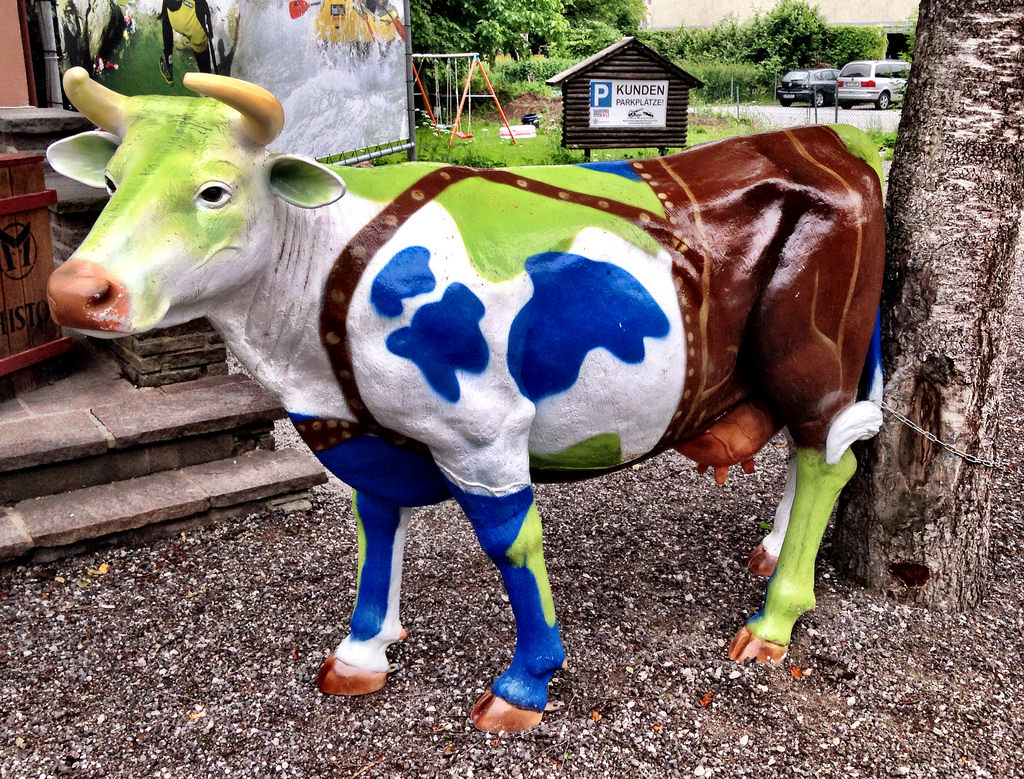 We were only cycling the final 51 kilometres of today’s stage. But with 2000 metres of ascent (and only 30m of descent) it promised to be hard work. So I woke early, and put on my Podium Cafe game face (note, they seem to call this the King not Queen stage): 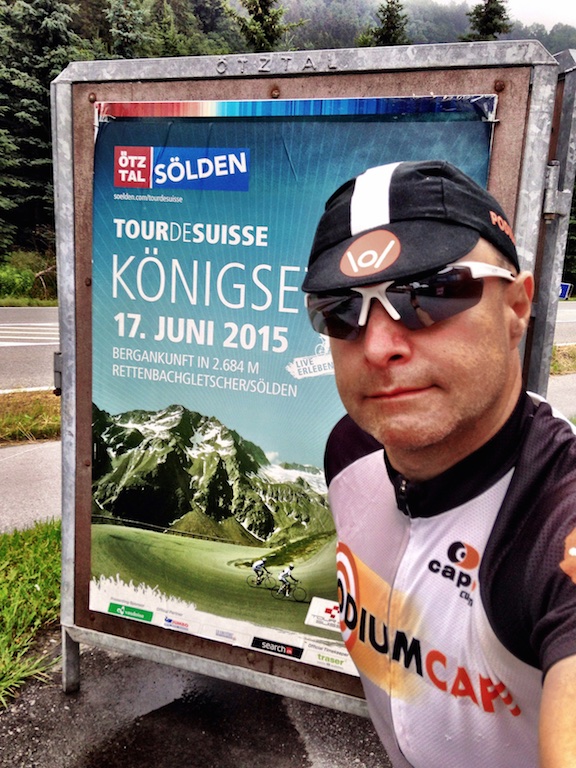 I knew the first 37 kilometres or so, while uphill, were not too hard, so I was determined to wheel suck in a big group. As the gun sounded, roughly 2/3s of people rushed through the start, flying up a moderately steep side road to the main route. I gamely joined the middle of the group – I had a game plan. Strategy. Woohoo.

5 minutes later, I was a beat or two below 100% of my max heart rate. I needed a new plan. So I slowed down, and a new group slowly formed of people also considering their Plan B’s. There were long flattish stretches, and occasional steeper ramps, but ever upwards. Hard work. I found myself briefly in front of a small group and successfully executed an elbow flick without hurting myself. I was in form today.

I looked on with satisfaction as the average weight of my evolving group gradually increased. This could work. Anyone sitting on my wheel? I’d just photograph them in their shame. 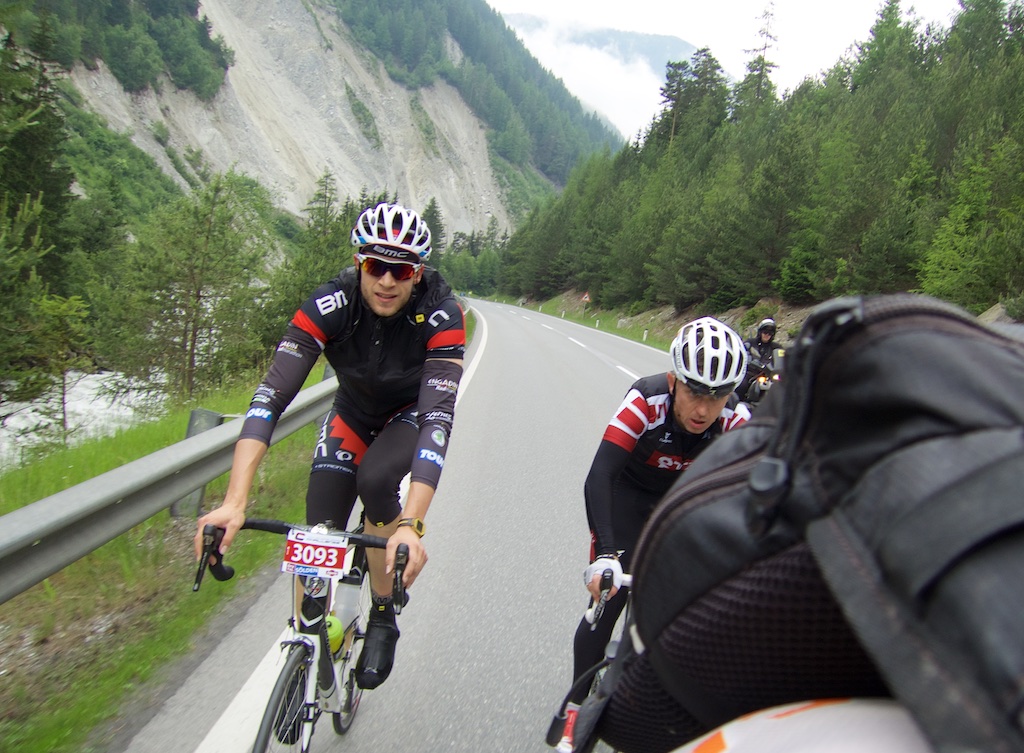 And ask them to kindly guide me through the approaching tunnel: 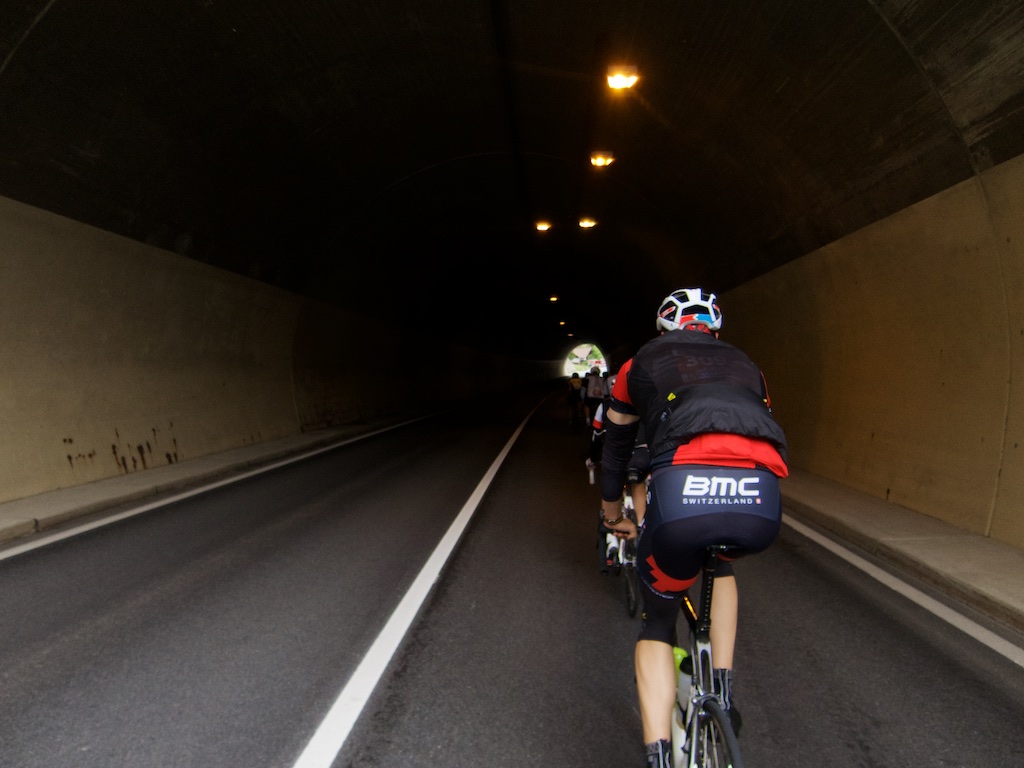 One fellow in my group must have been the local mayor as he knew everyone on the side of the road, half the people on the bikes, (and many of the workers up high later on). We chatted a couple of times and he nick-named me Frenchie. I’ve been called worse.

As we entered Sölden things were about to get serious. The real climb was about to start. I’d been handed a fresh water bottle by the same kind lady that registered me earlier (thanks for the enthusiastic cheer). I realised I now had three bottles and gleefully threw one at a kid. Fun times.

Exiting Sölden the route turned up. The group instantly fell apart. Some people going ahead of me, others falling back in agony. I have never seen so many 13% signs on a single climb. Ouch.

As I reached the 10km-to-go sign, my GPS told me that my last kilometre had been at an average speed of 8.5 / kmh. Sadly, I am quite good at math and was discouraged at how much longer this would likely take. Note, I am still being led by the earlier wheel sucker: 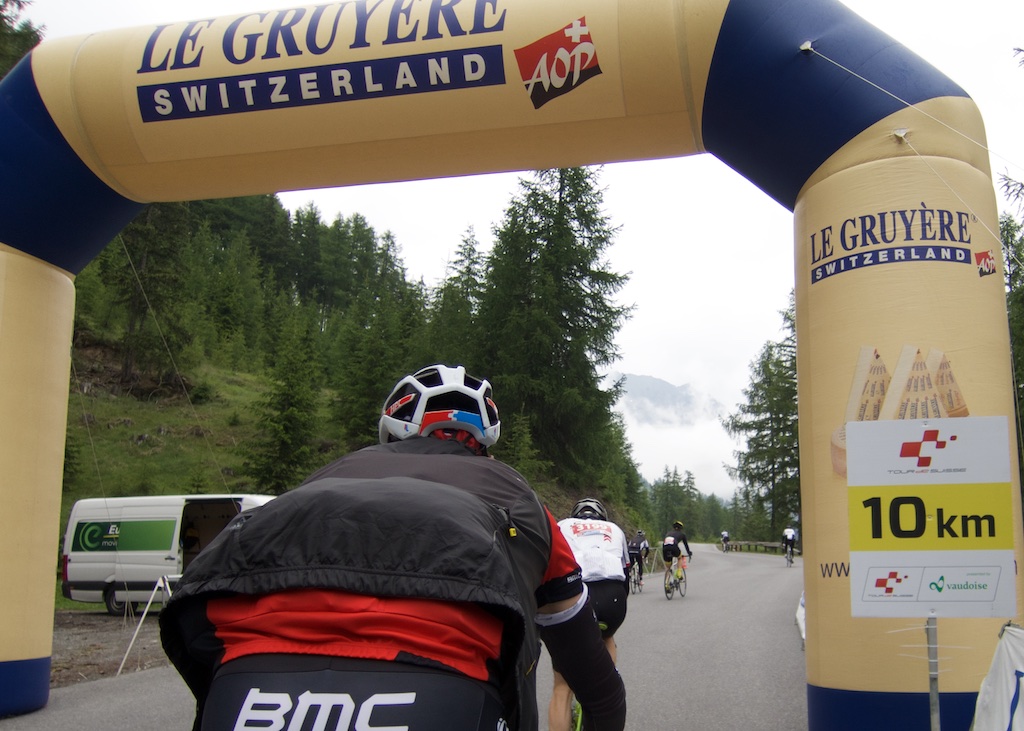 I saw the motor-cycle guy with the spare wheels and briefly considered faking a flat in attempt to upgrade my wheel set. 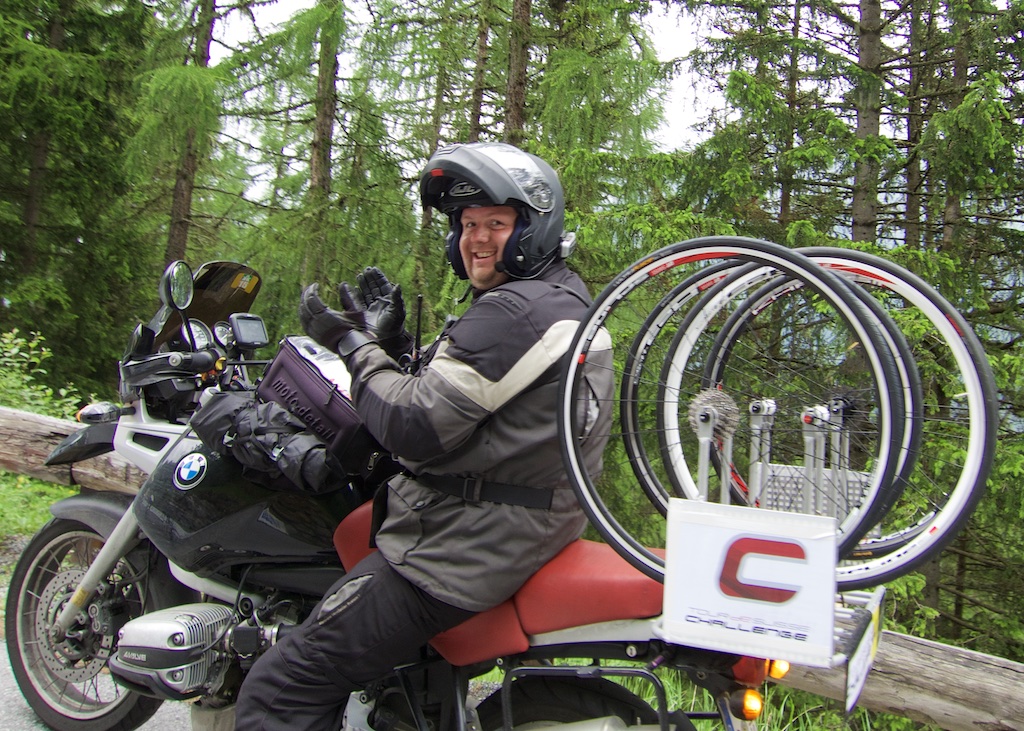 I was getting tired, and delusional. I needed some encouragement, so I convinced myself that my nickname was Fäbu. That did the trick. 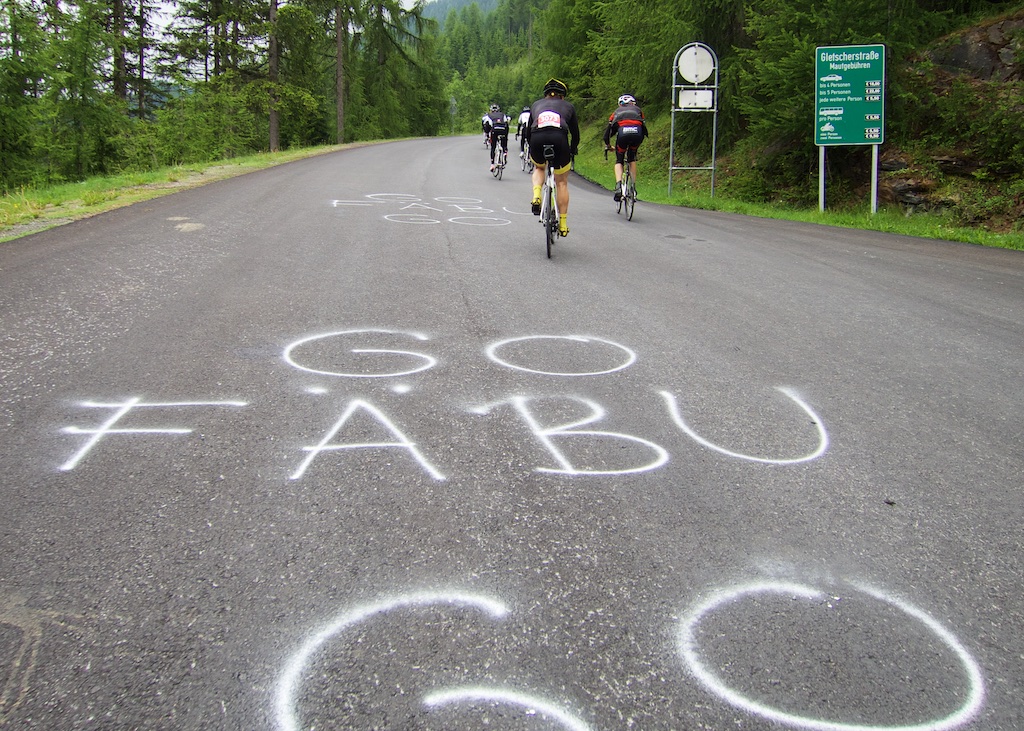 At least I could still smile: 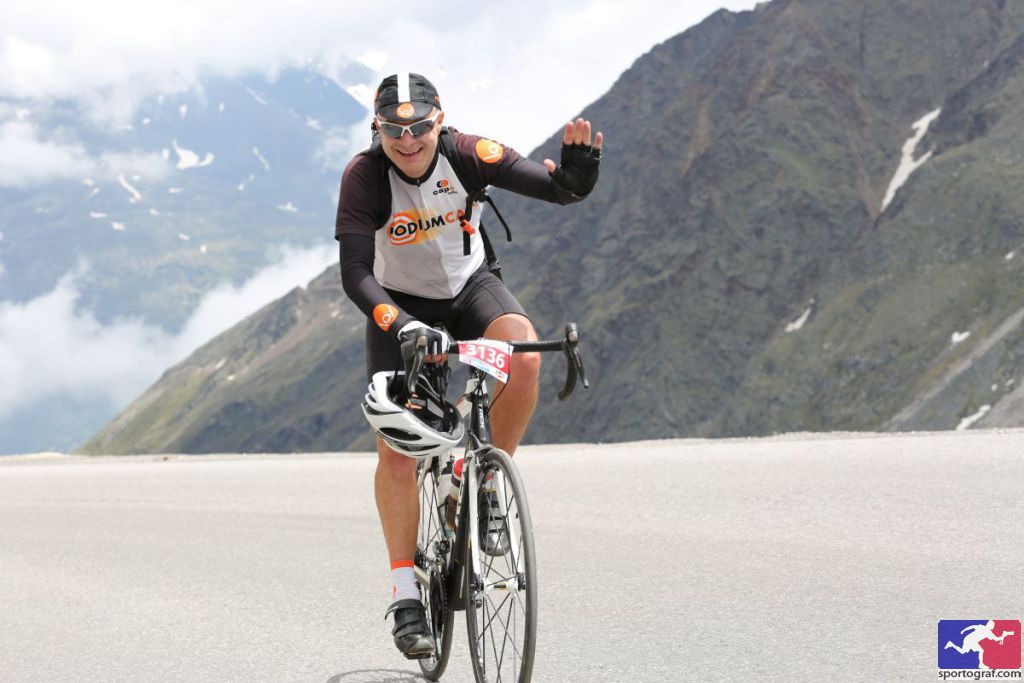 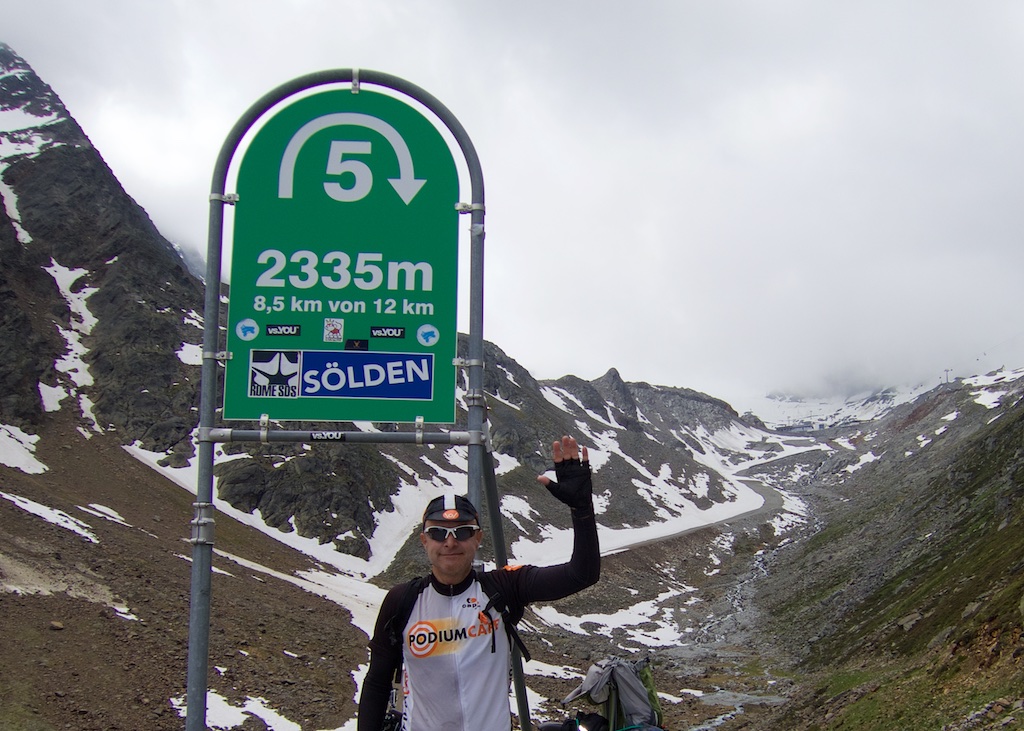 I had been riding near a guy with the least personality and friendliness that I have ever met. I’d slow and take a photo, and grind back up, smile, grunt, etc. Hated that guy. We suffered together. But nothing. Hated him. (not guy below). Did I mention this climb was steep? 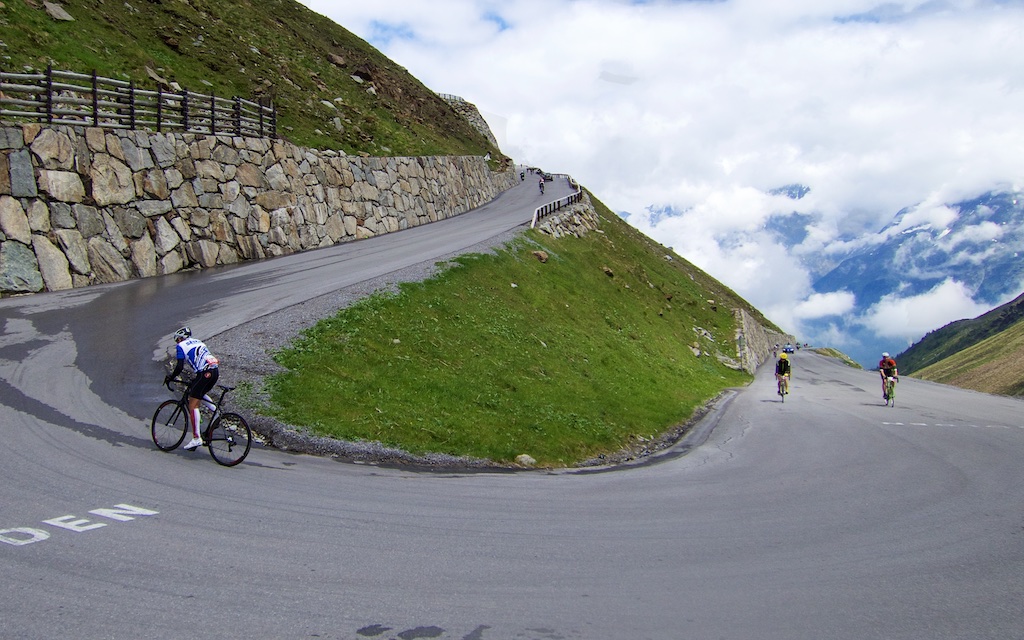 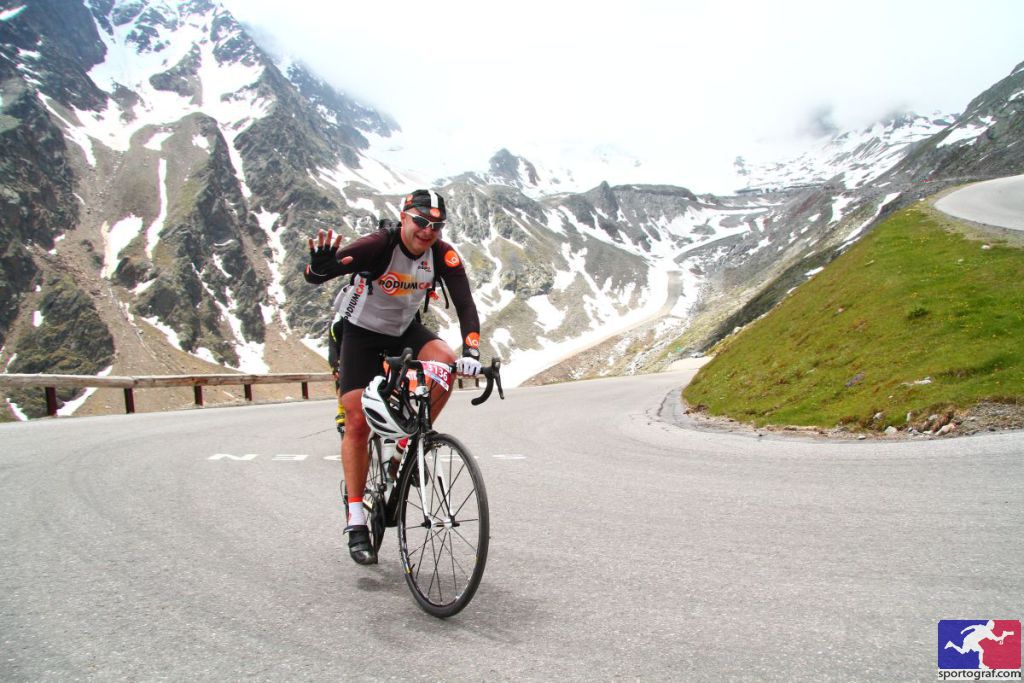 I stopped and asked the guy erecting the Flamme Rouge, what the word for Flamme rouge was in German. “Flamme Rouge” he declared. Loved that guy. 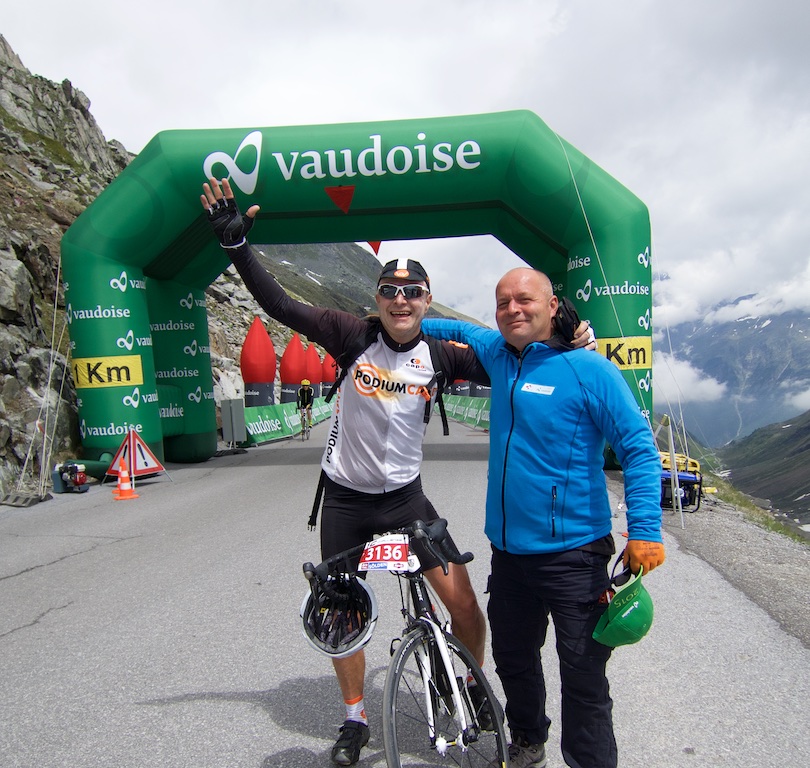 I am more cheerful than others while suffering: 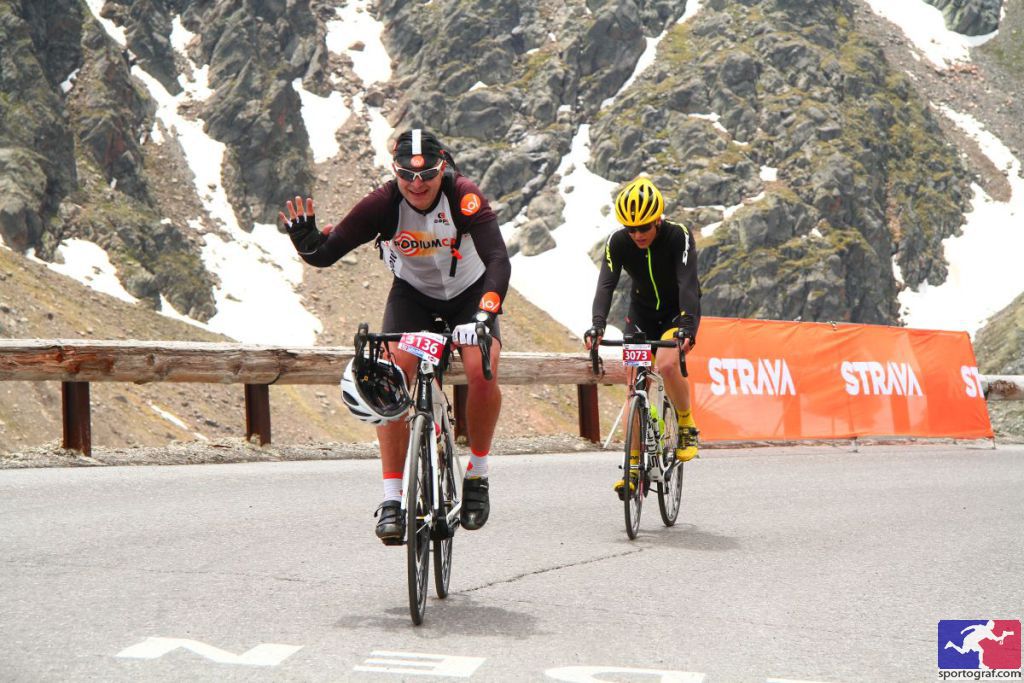 Woohoo, I was going to make it. Many nice people gave me slow-guy-pity cheers. Much appreciated. 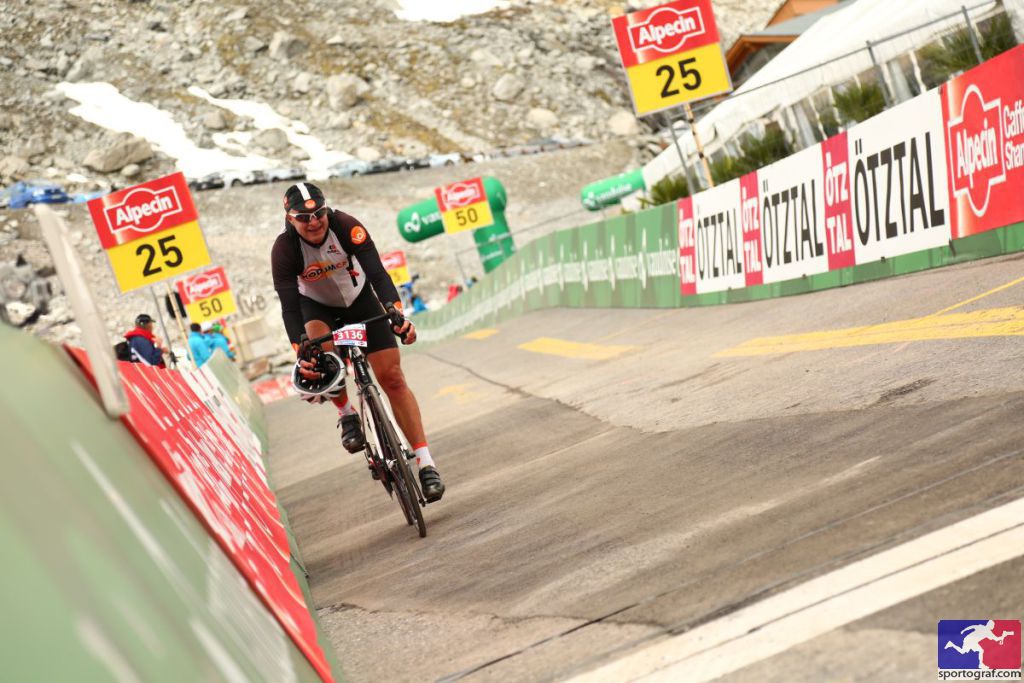 As I crossed the line, I turned around so I could “stage” a photo. Some official guy started screaming at me to get out of the way. The road was empty. I ignored him and rode back. He yelled some more. And I may be wrong, but I think the loudspeaker guy yelled a little too. Regardless, I took my photo, no one died. I pretended I was Italian.

Me winning a second time: 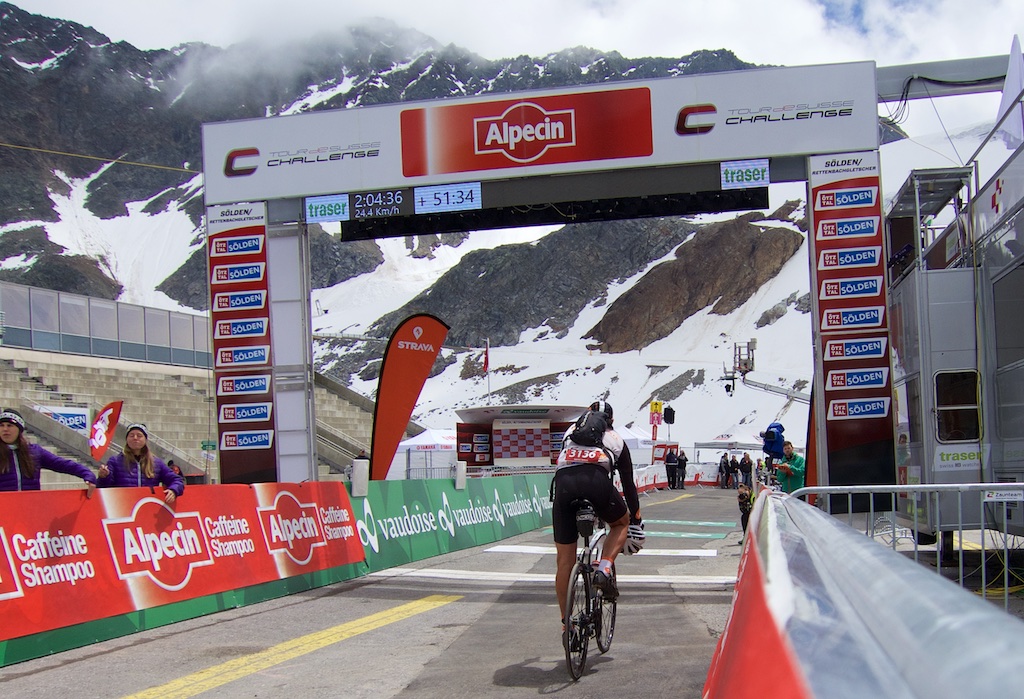 I only tweeted once:

What a great place for a stage finish. I don't mean the glacier, I mean the bar. Bravo Thibault #tds #cycling #beer pic.twitter.com/doWAN77Gb7

I was sad that hanging with Flamme Rouge guy cost me breaking into the top 100, but, happily, I finished first among Canadians! And I also beat the only American. North American glacier champion!

I had a few hours to kill before the pros arrived. I only knew 5 words of German. But I was determined to practice and practice the language.

Last we talked I was busy drinking beer beside a Glacier. I had several hours to kill, so I ate my race-provided Lasagna and had a look around.

The setting was cool. Just behind the finish was the huge glacier. Just a wall of snow. Still people skiing down it. In July, the road goes a little higher – and in some tunnel becomes – I believe – the 2nd highest paved road in Europe. But it was snowed over today. 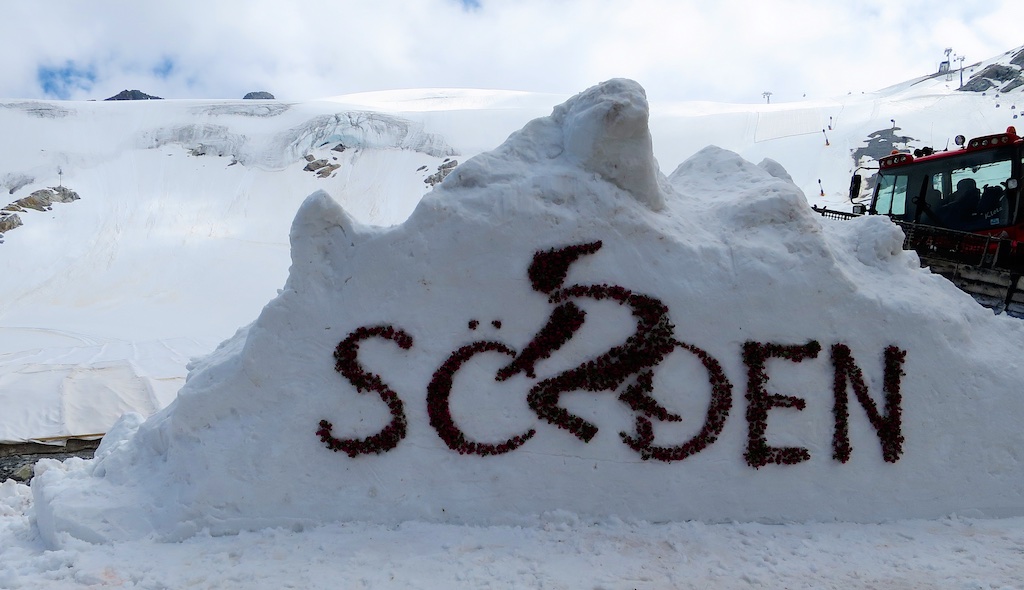 I enjoyed various entertainment at the top. Strangest “gift” offered by the publicity caravan? A small salad. I declined. But have a few more caps. 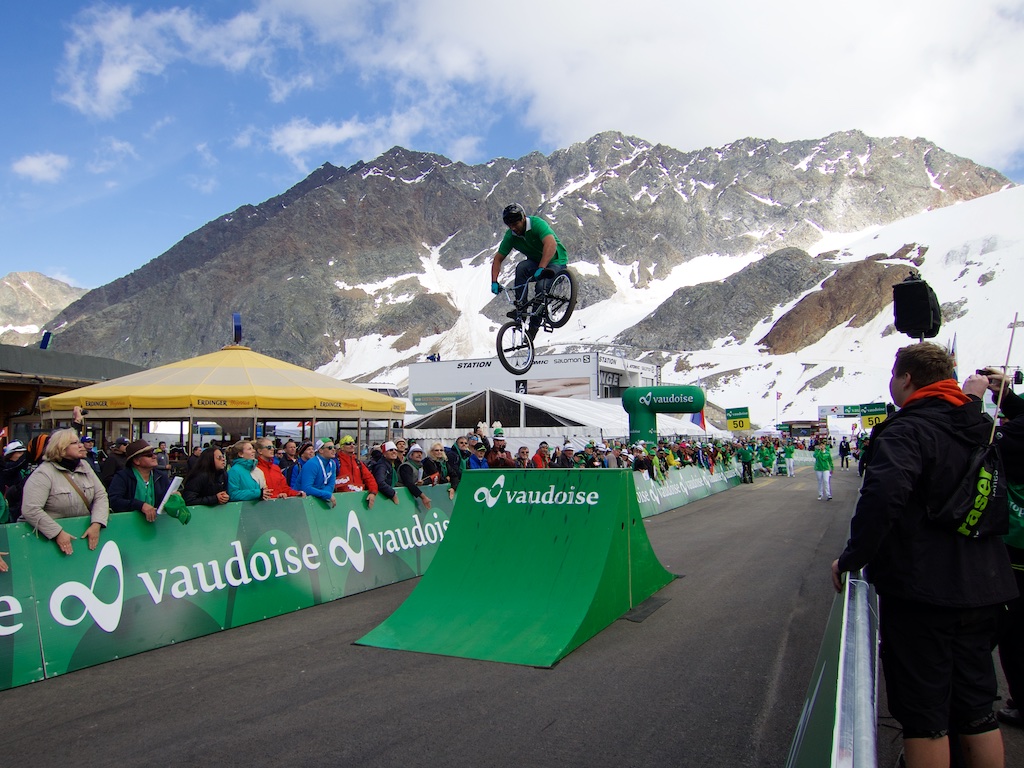 These Slovakians arrived. I asked where they were from: 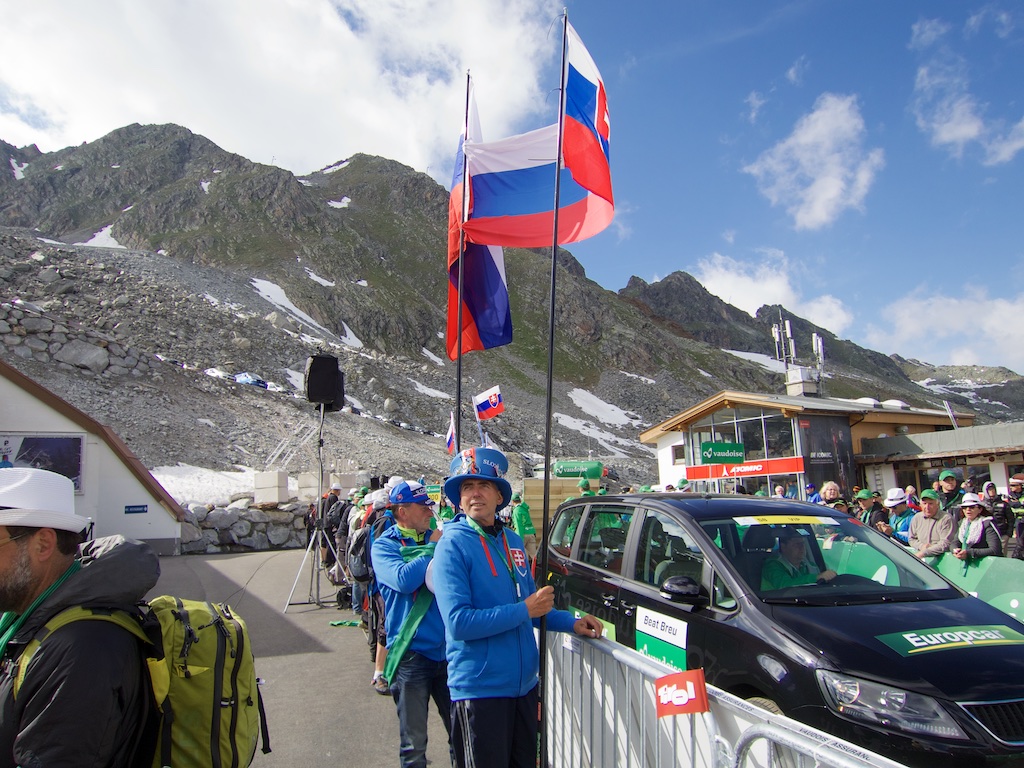 It was cold at the top. I soon realised that the race wouldn’t finish until near 6pm, and with the sun soon to be behind the mountain, all the stragglers arriving late, and the teams battling to get off the mountain,I panicked. Worrying that I would be blocked by security for some time. I still had 51 kilometres to cycle.

So I was determined to get below the barriers before the race arrived, and descended down to my buddies at the Flamme Rouge.

I won’t bore you with too many race pics but here is Pinot arriving at the flamme rouge on the way to a famous victory – I was YELLING “Thibault, Thibault.” 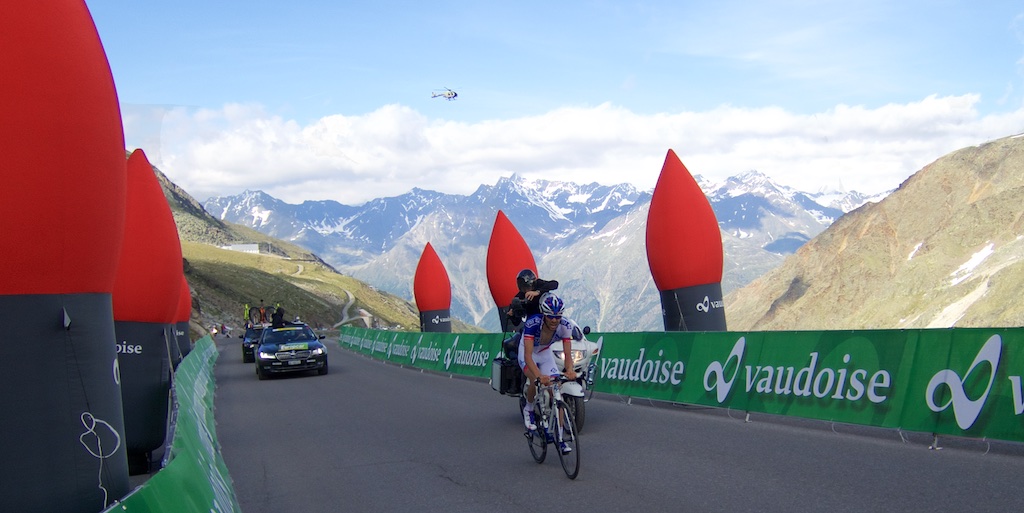 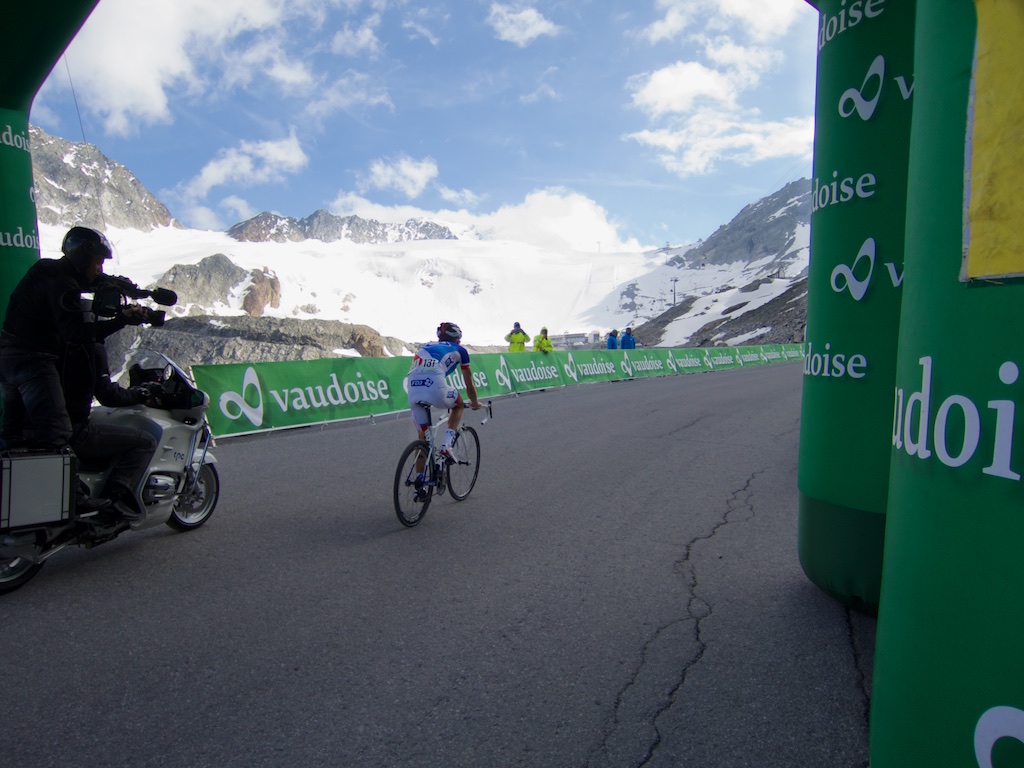 Pinot and the glacier 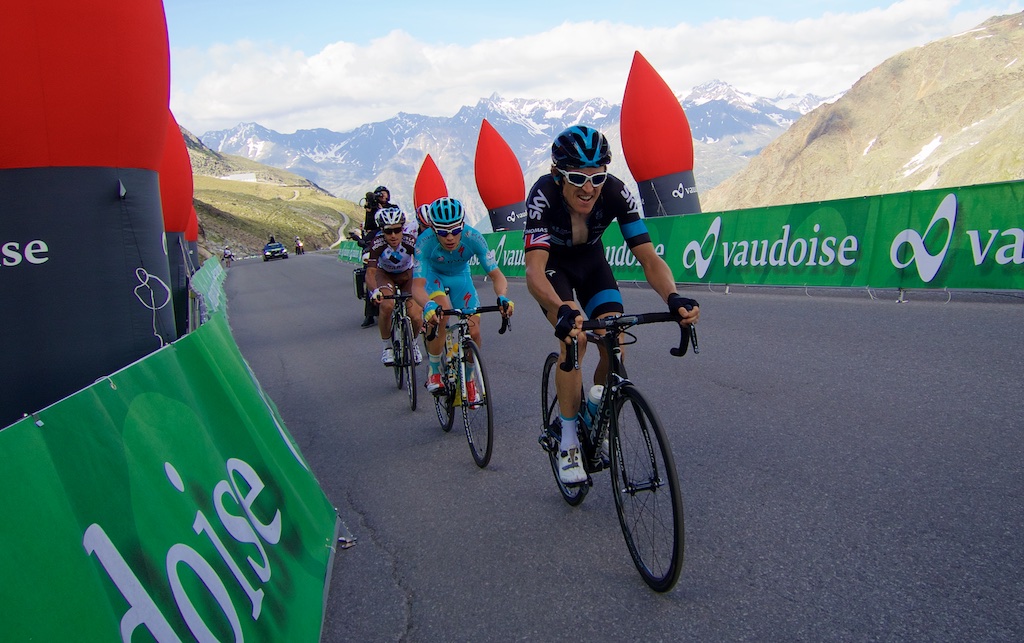 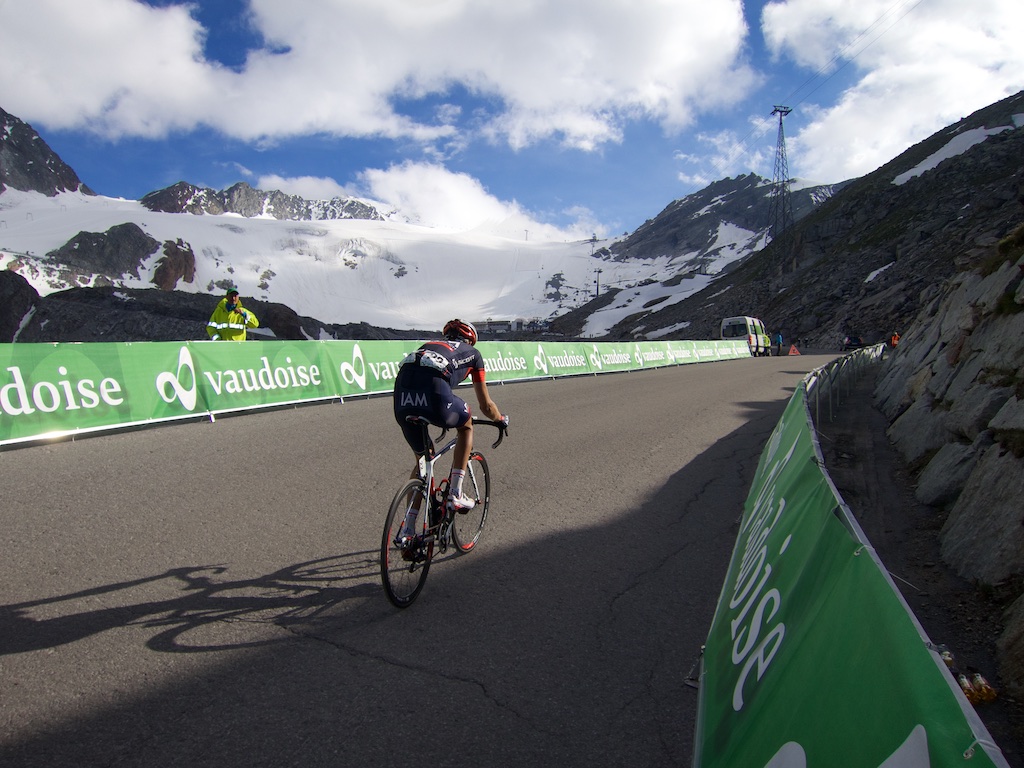 The Swiss National Champion and friends: 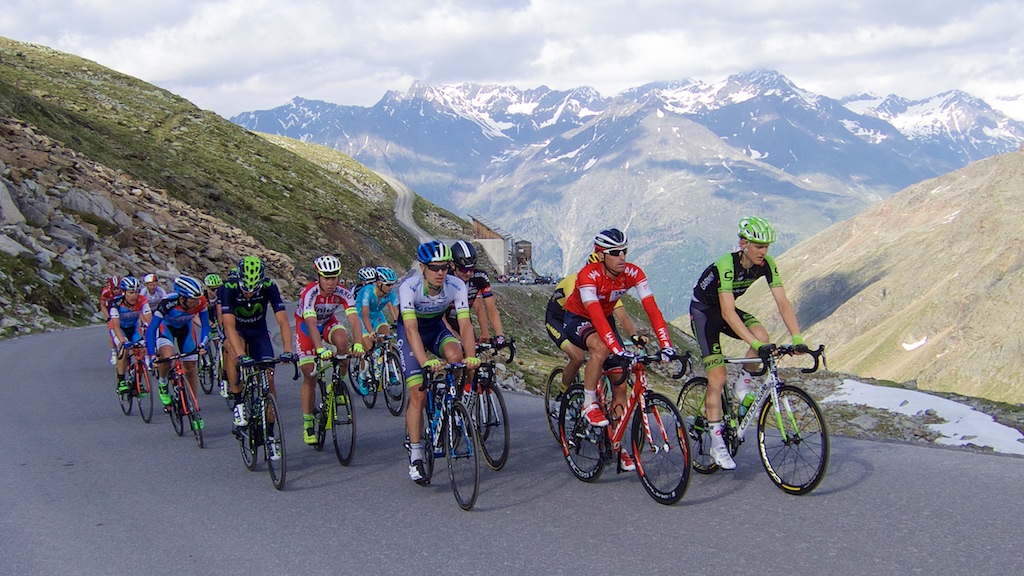 Soon pros that had finished were descending. So I started down as well. Wrong way: 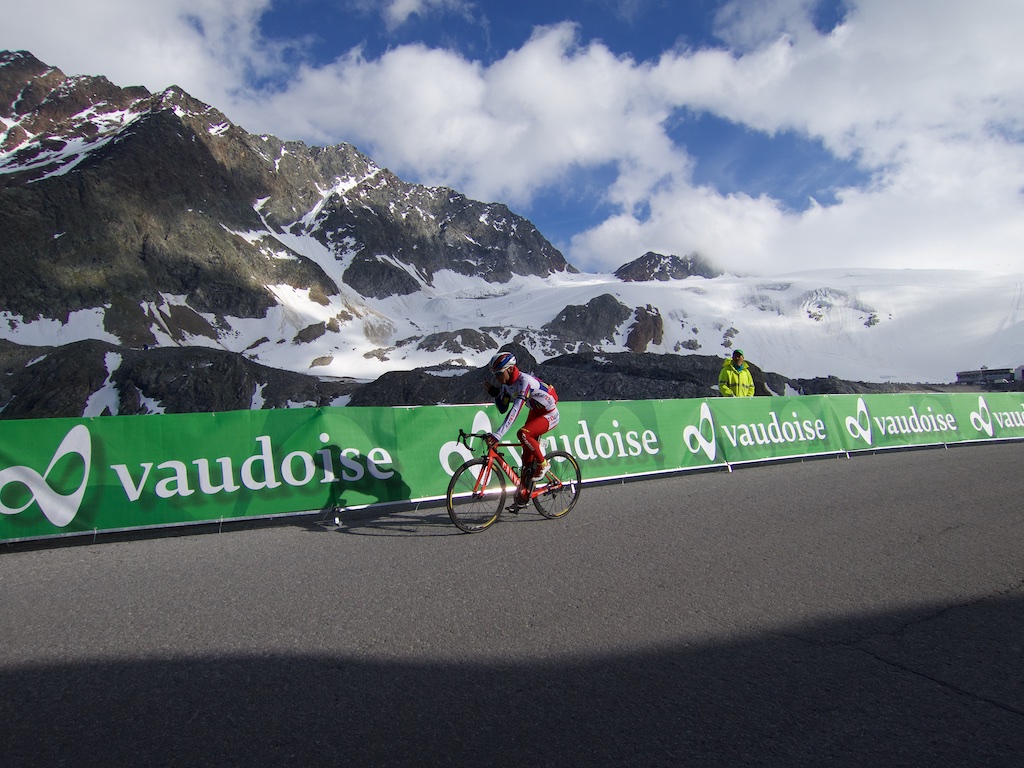 I stopped occasionally to cheer on some favourites.

The World Champion Micha? Kwiatkowski near the very back: 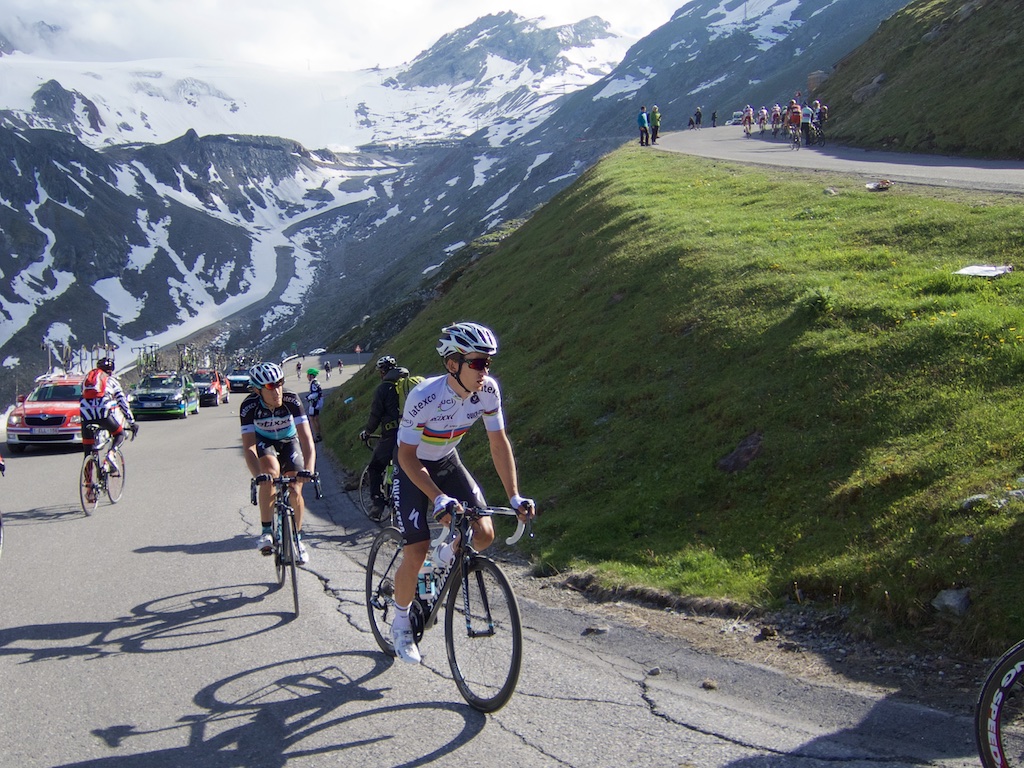 The French champion Arnaud Démare barely ahead of the broom wagon: 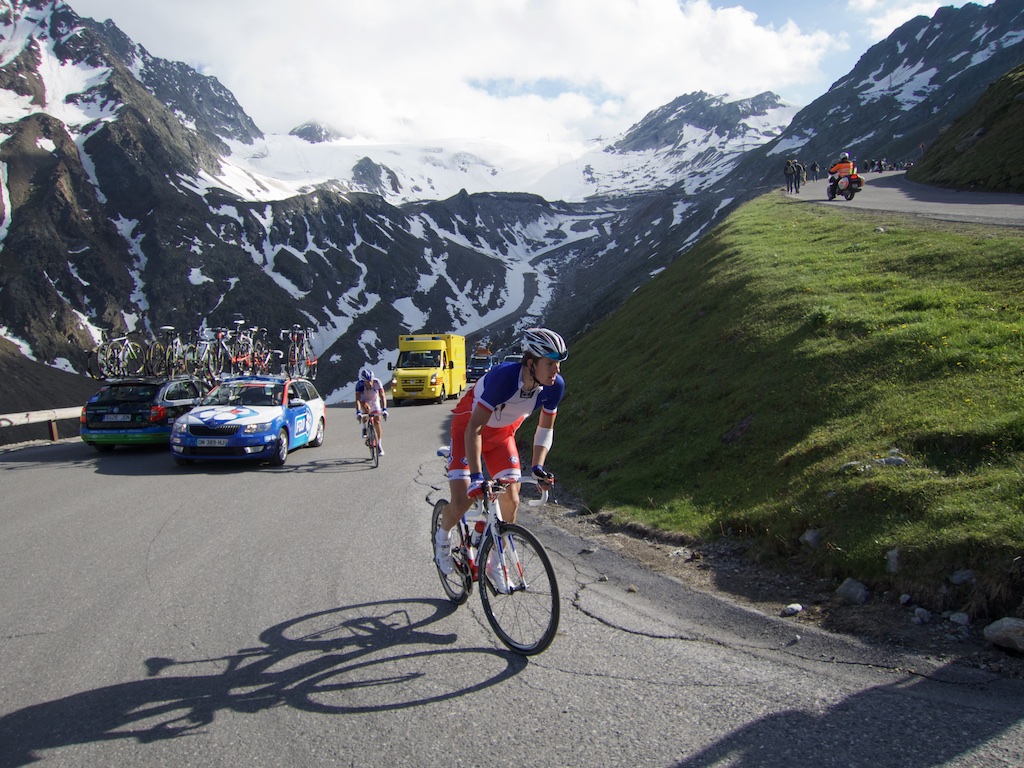 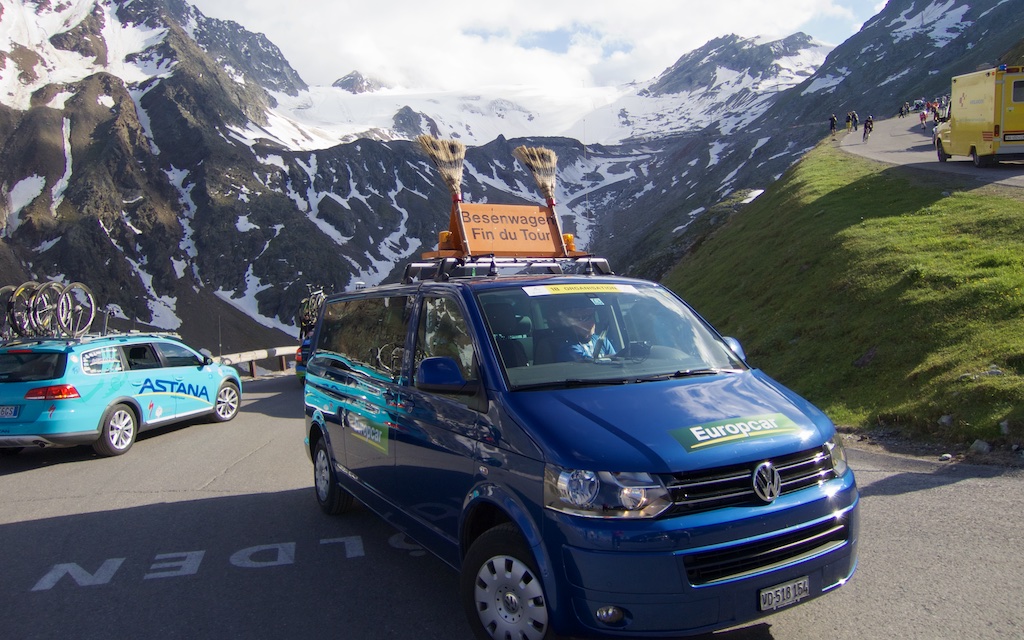 I was glad I had got an early start as all the way back I saw barely any amateurs. But the descent was surreal. I went slow down the super steep road, periodically passed by pros going double my speed, stretching and chatting away.

Most of the team buses were parked in Sölden. Although I never saw the Saxo bus, just one Saxo pro with a bemused look, glancing around. I saw the Astana bus parked at a restaurant 25 kms below the finish and considered stopping as I was starved. Not sure if it was a steak house, but I decided against it anyway.

I survived the long ride back to my hotel and believe I shall sleep well tonite.

Steep, Steep, and Steep. The glacier helps offset the lack of hairpins.