Col du Galibier via Col du Telegraphe is the biggest climb in France in terms of altitude gain. I can get to the base of Telegraphe from home in an hour forty-five – as it starts right next to an autoroute – sweet.

Galibier is epic, but before starting, its necessary to climb first category Col du Telegraphe – a really nice climb.

I had a fairly early start to ensure I could get up top before the road was shut to cyclists – and I knew I’d need close to 3 hours. From the very first turn, people were already all over the hill – everyone in good spirits as usual. It really is a great experience to cycle a big climb on Tour de France day.

Scott, my kiwi friend, had his camper near the top of Telegraphe – he was taking a rest day to watch a stage with his wife and son Will (they claim not named after me). But I stopped in for a coffee and chat. (Hours later – on the way down Scott cooked me a great curry dinner – nice one mate!).

Two rest days left my legs feeling stronger than in ages and I climbed Telegraphe at a nice pace, reminding myself that the hard stuff was still to come. A descent into Valloire and then up. The last 8 kilometers of Galibier are just amazing – at Plan Lachat the road just turns up and quite literally goes over the mountains. Awesome.

The very top was a zoo, and there is not much space up there so the gendarmes wouldn’t let us do the last 100 metres – so I demanded a photo (see below). I descended about a kilometre to watch the riders pass.

Like Saturday, the riders were spread out, although the groupetto (slow group of riders that help each other stay ahead of the cut-off time) was HUGE. 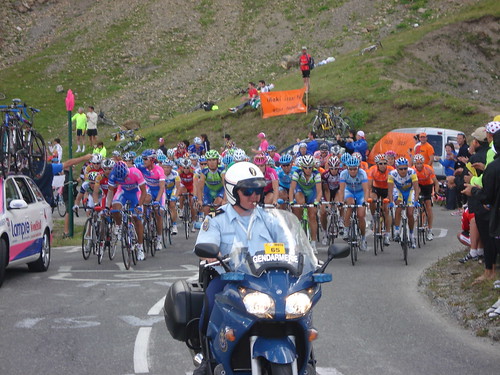