This was the “easiest” day of my three day Tour du Mont Blanc by mountain bike adventure with my pal Alfie. But it might have been my favourite. Our main goal was climbing Grand Col Ferret (2537 metres) high on the Italian/Swiss border. Glacier heaven!

WARNING! This loop requires LOTS of bike pushing – both uphill and down. Much of the 3-day route, especially the higher slopes, are on steep, rocky, difficult mountain terrain. It’s often completely unrideable regardless of how strong a cyclist you might be. But, many of my favourite stretches along this stunning circuit were along these unrideable parts.

Initially, it’s a steep climb out of Entrèves up and into the Val Ferret, but it then flattens out for several kilometres. We were pleased with our route hopping off the main road to ride several great stretches of trail. Despite the valley being relatively flat it’s surrounded by huge mountains and glaciers.

After a few kilometres of trails we began heading up on a gravel road that leads to the Rifugio Elena (2061 metres). From here on the climb is a dream. 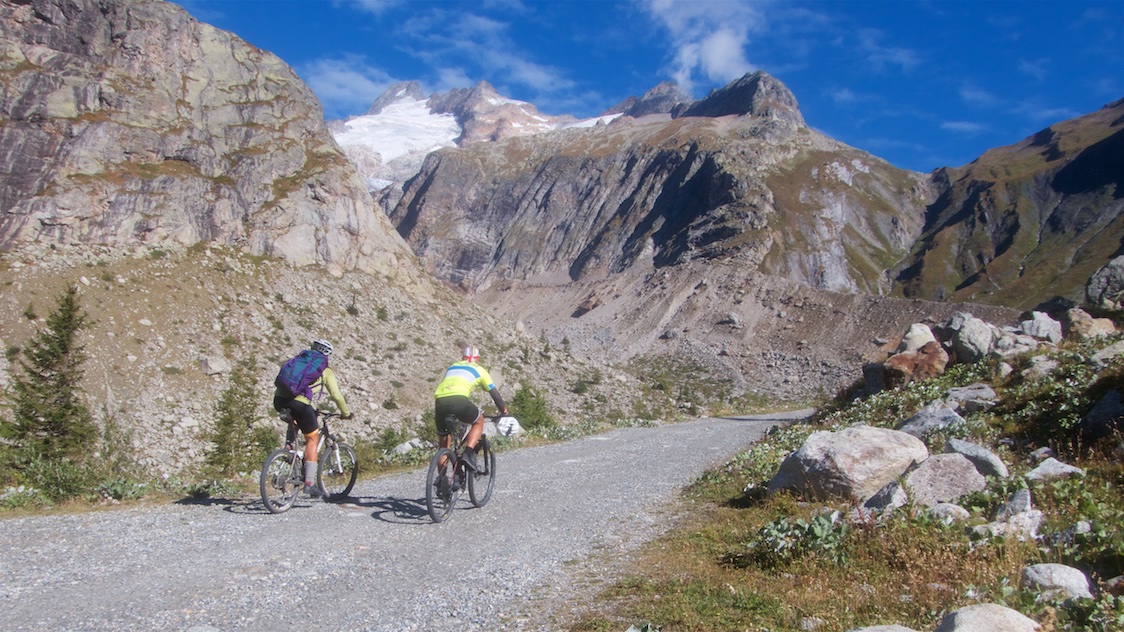 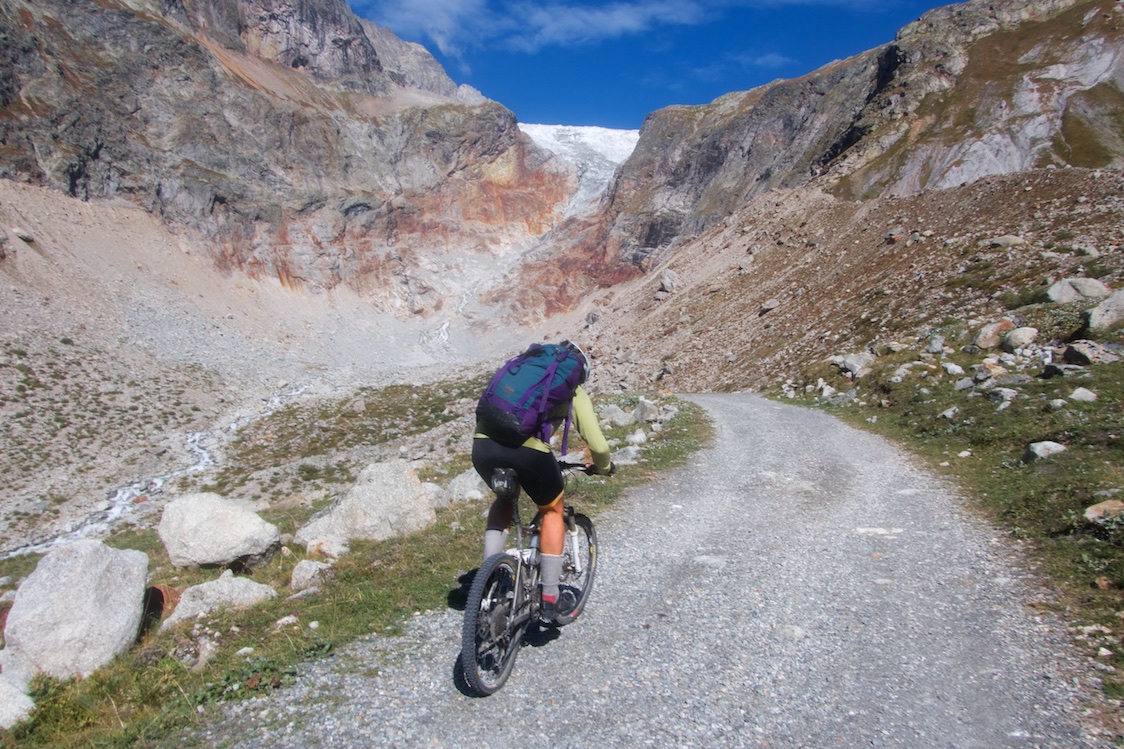 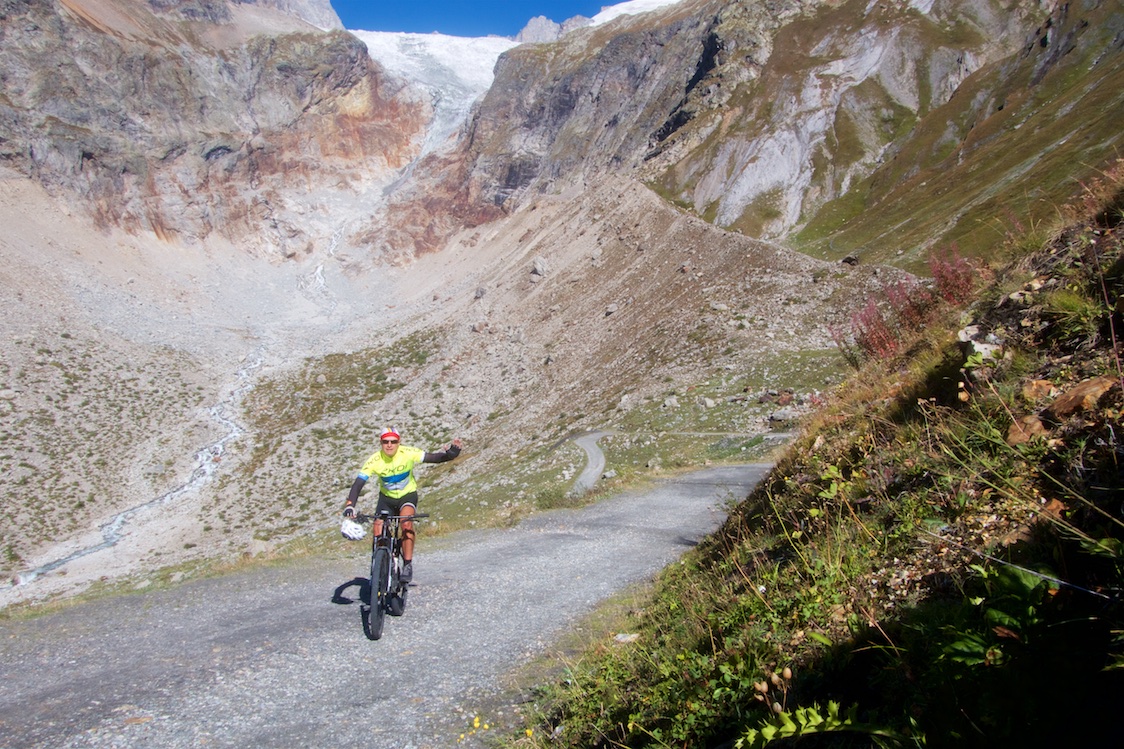 The gravel road ends at the Rifugio and the balance of the climb is on a good quality hiking trail. From here, it’s a combination of pushing and riding, as it’s often very steep and tricky. But it’s never dangerous and every view is simply gorgeous. I’d guess Alfie got sick of my exclaiming “Wow!” at the view every time we turned a hairpin. 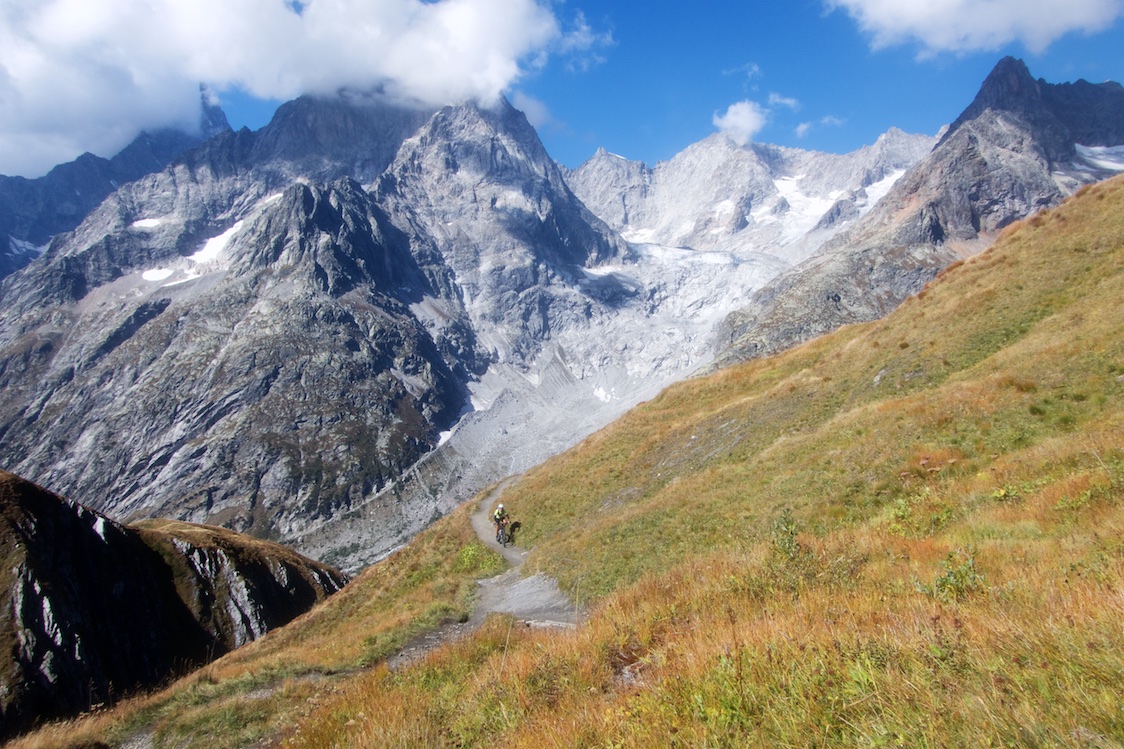 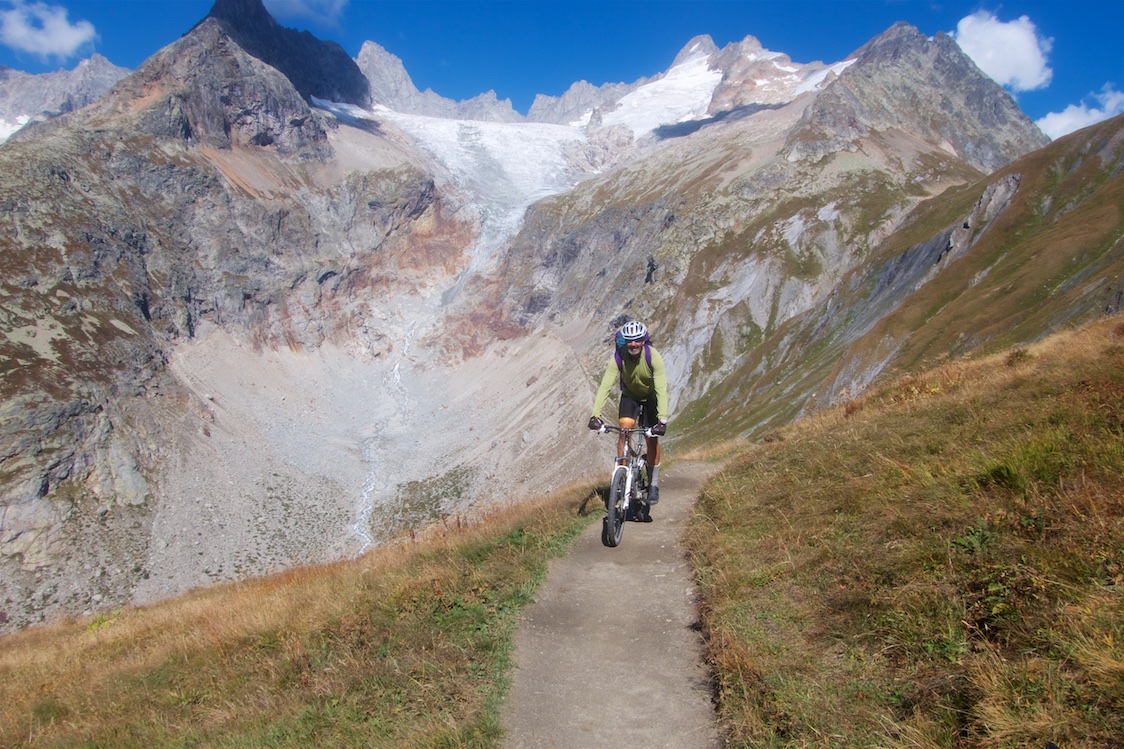 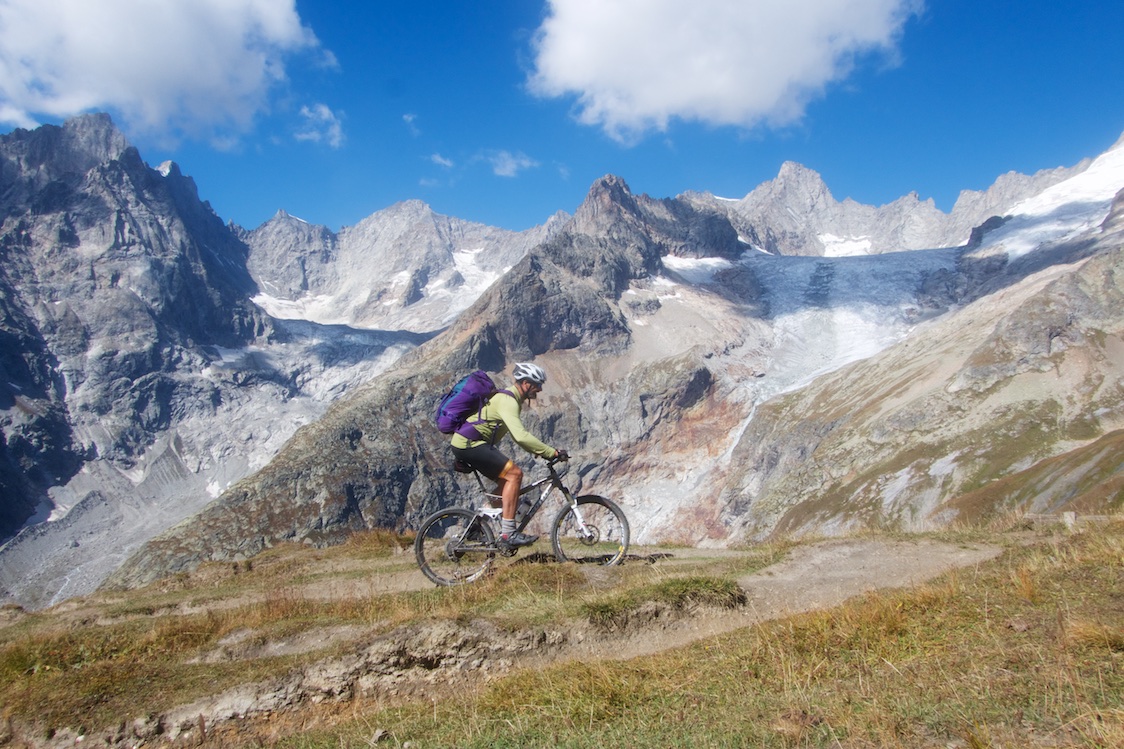 Nearing the summit Alfie drafted behind a friendly herd of sheep. 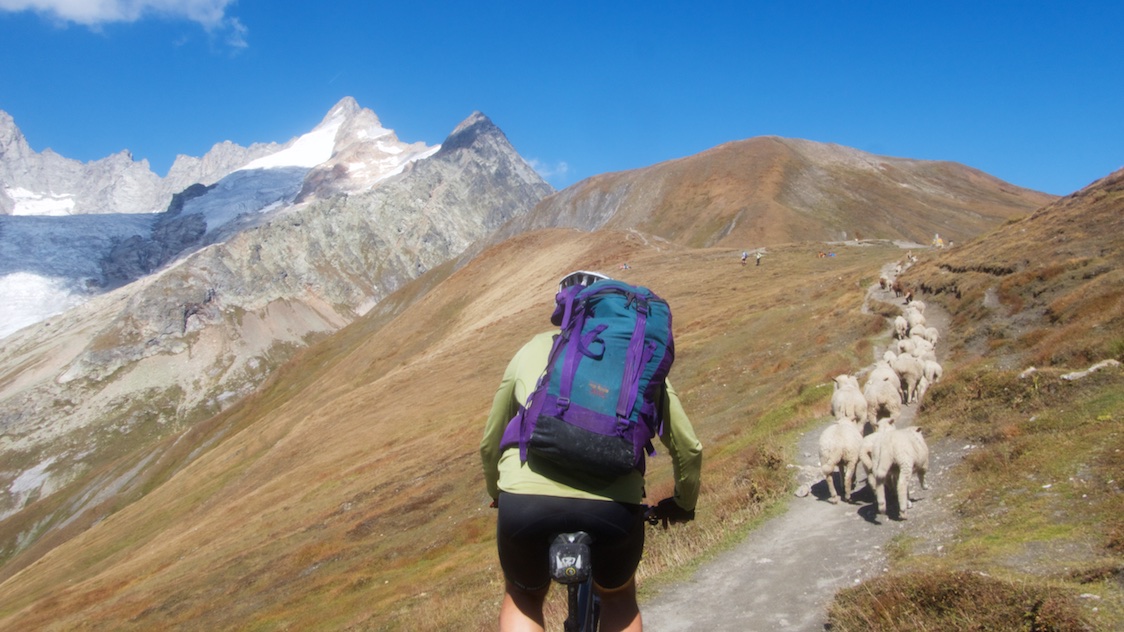 Grand Col Ferret is at 2537 metres, so in the photo below I must be at 2540 metres – with one leg in Italy and the other leg in Switzerland. 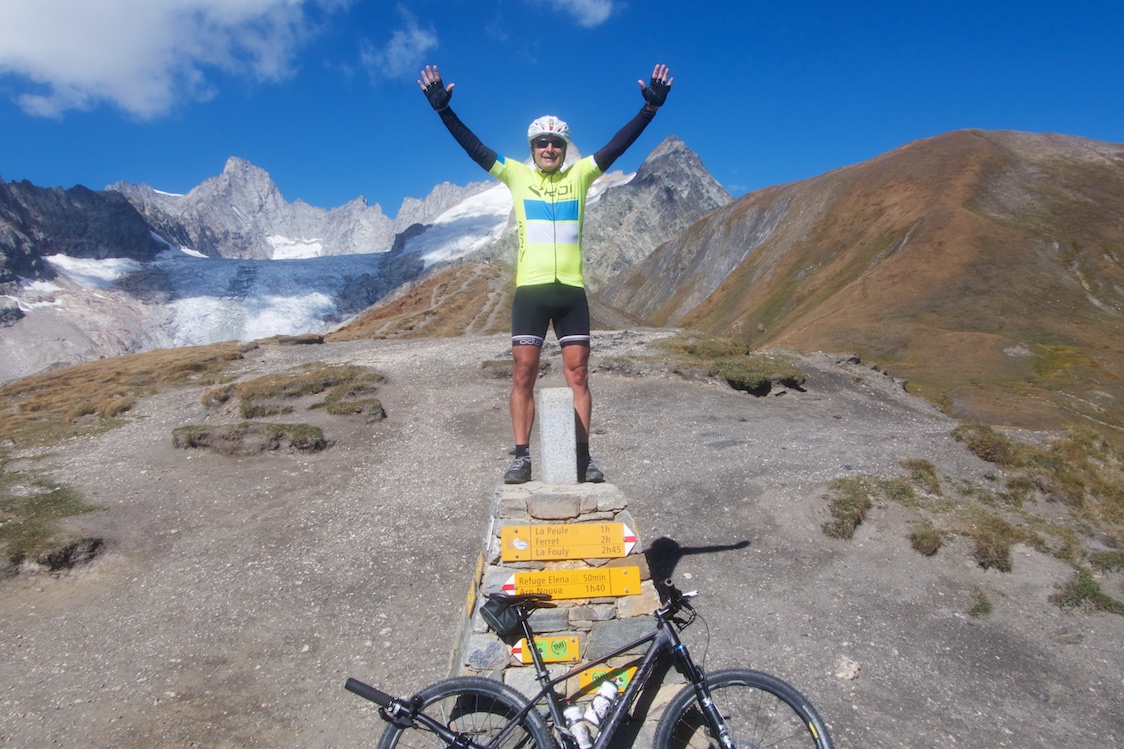 We wandered higher above the Col on the ridge leading toward the glacier. We had lunch here on an amazing little summit – and took a few fun photos. I couldn’t stop laughing. Wow! 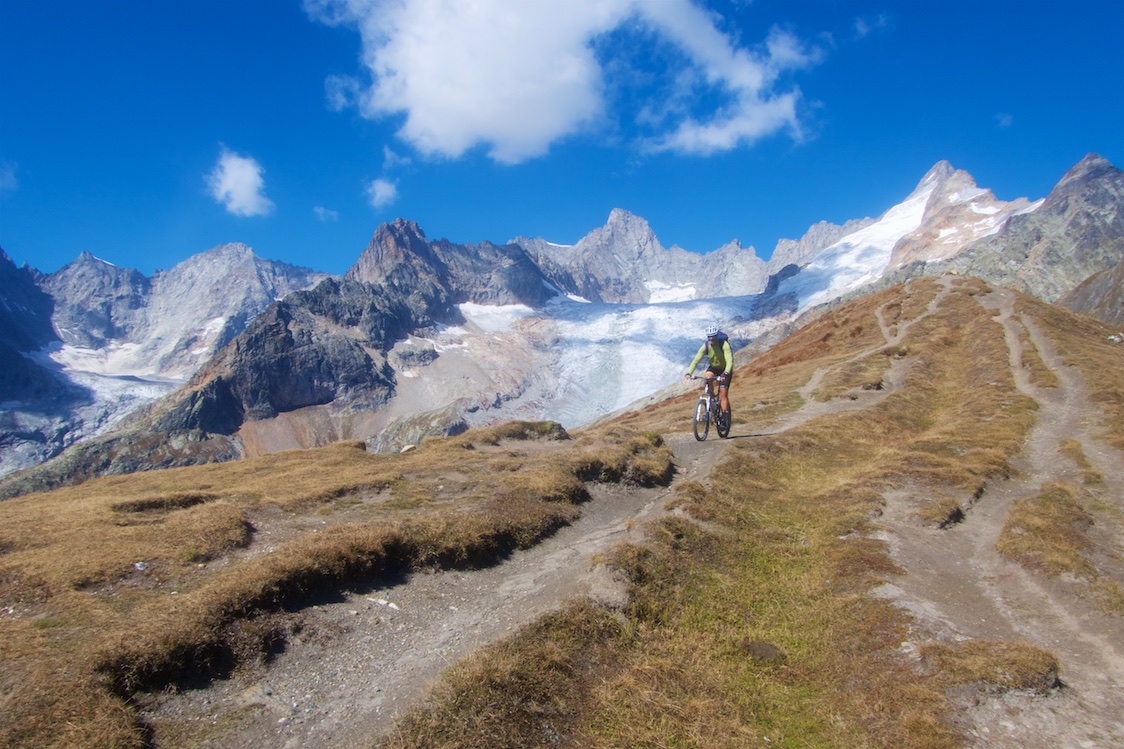 We went briefly off the main trail by going over the summit where we at lunch and down the other side. 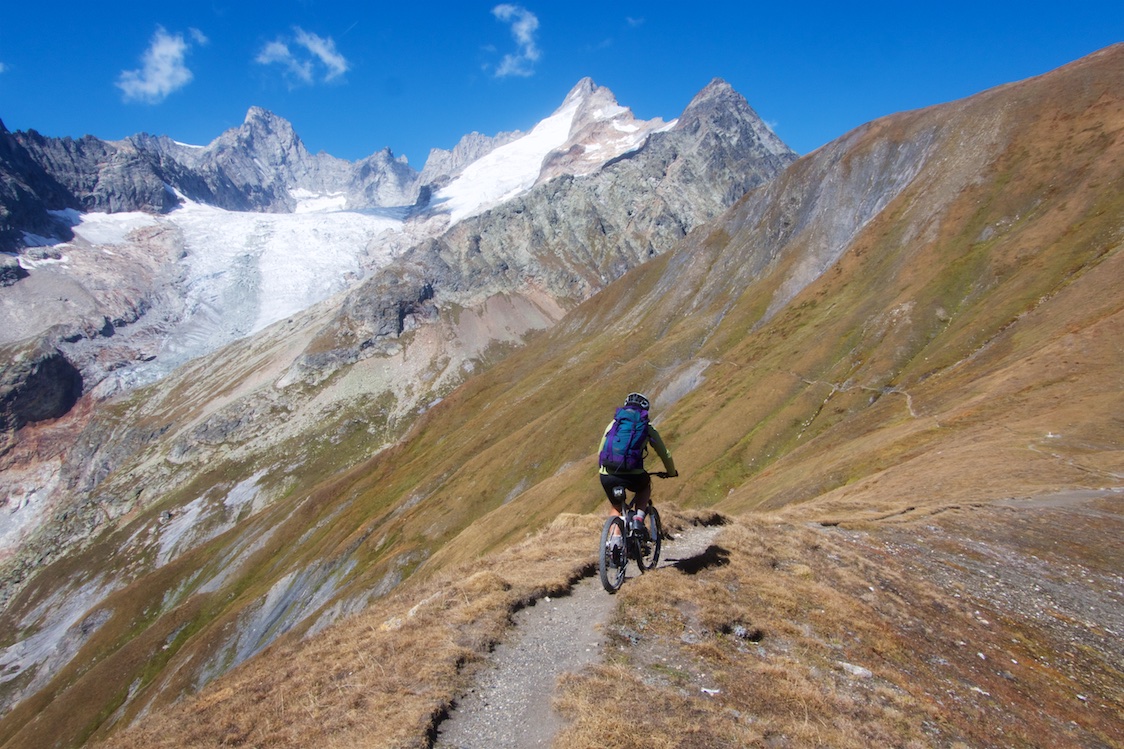 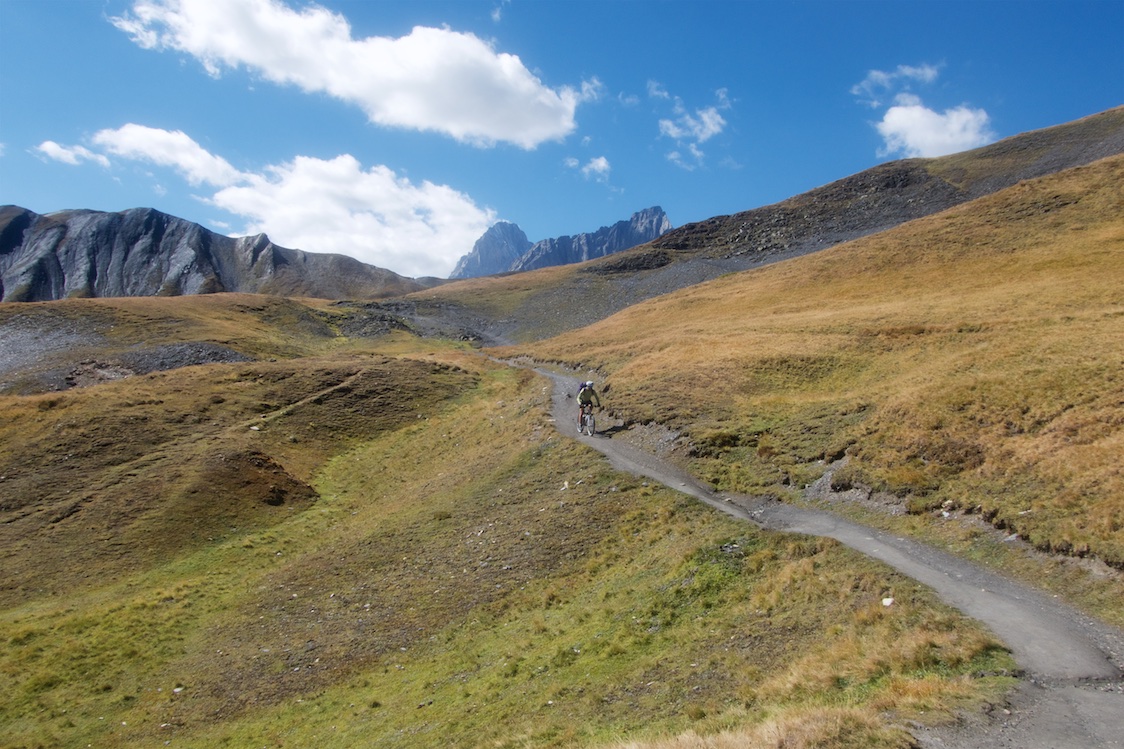 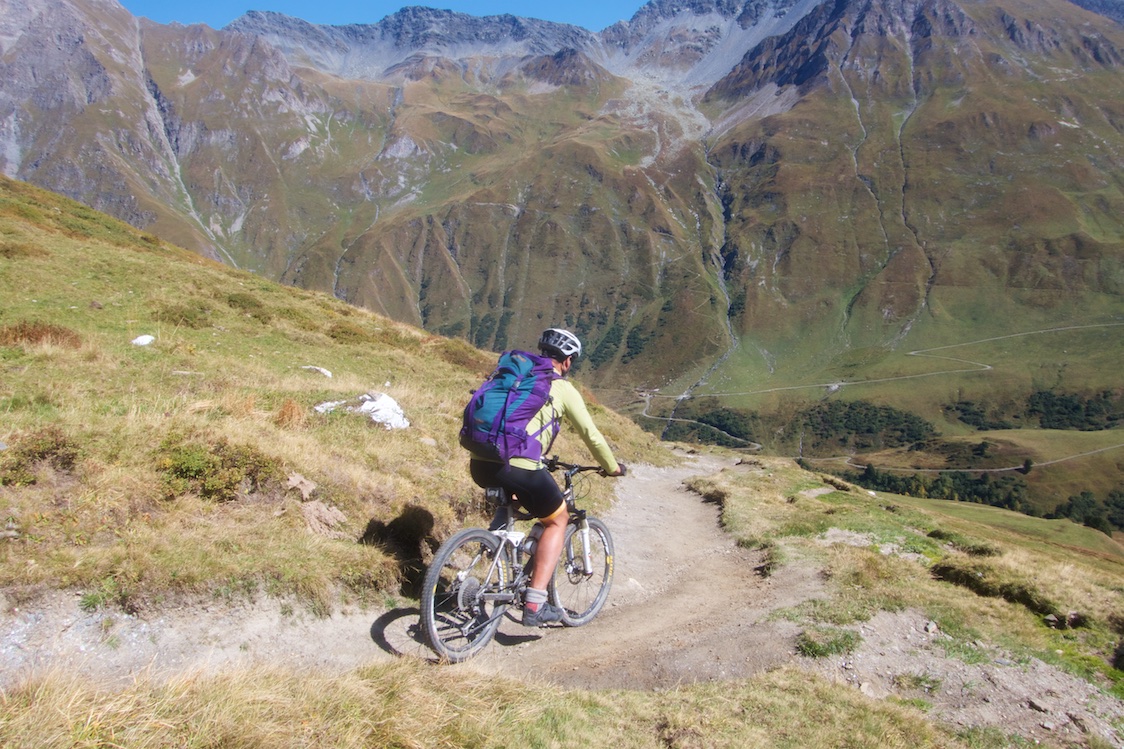 We stopped at the restaurant/refuge Alpage de La Peule (2071 metres) for a drink and some calories – and a brief rest.

From La Peule there is a gravel road down into the Swiss Val Ferret. Not a bad place to be riding: 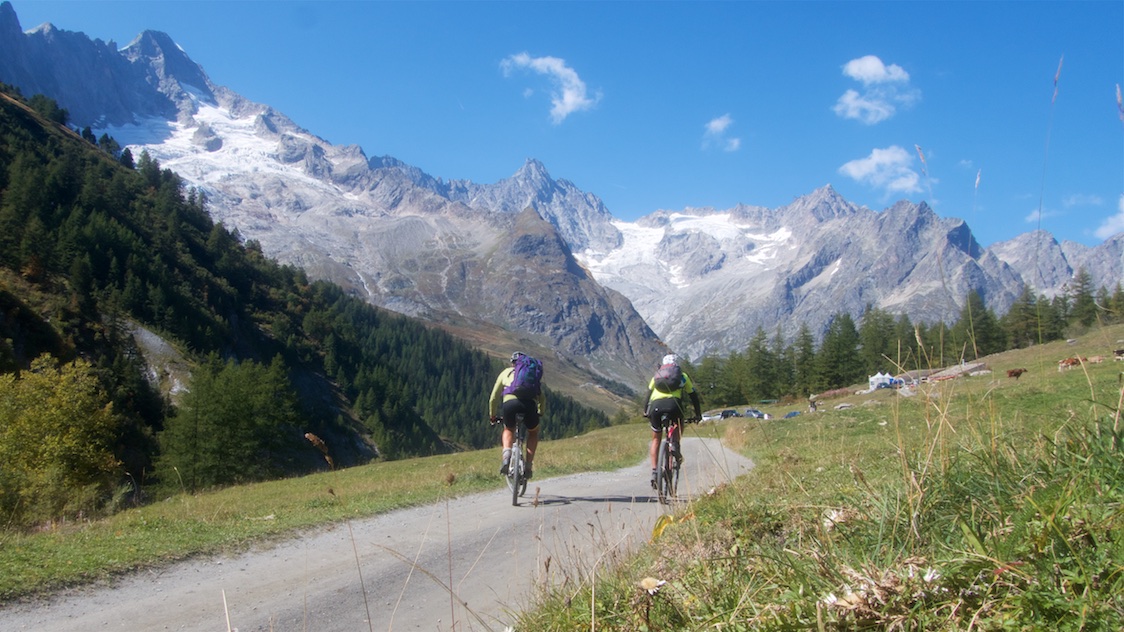 At one point back on the main road, I saw a great road off to the left. It was a dead-end, but worth the exploration: 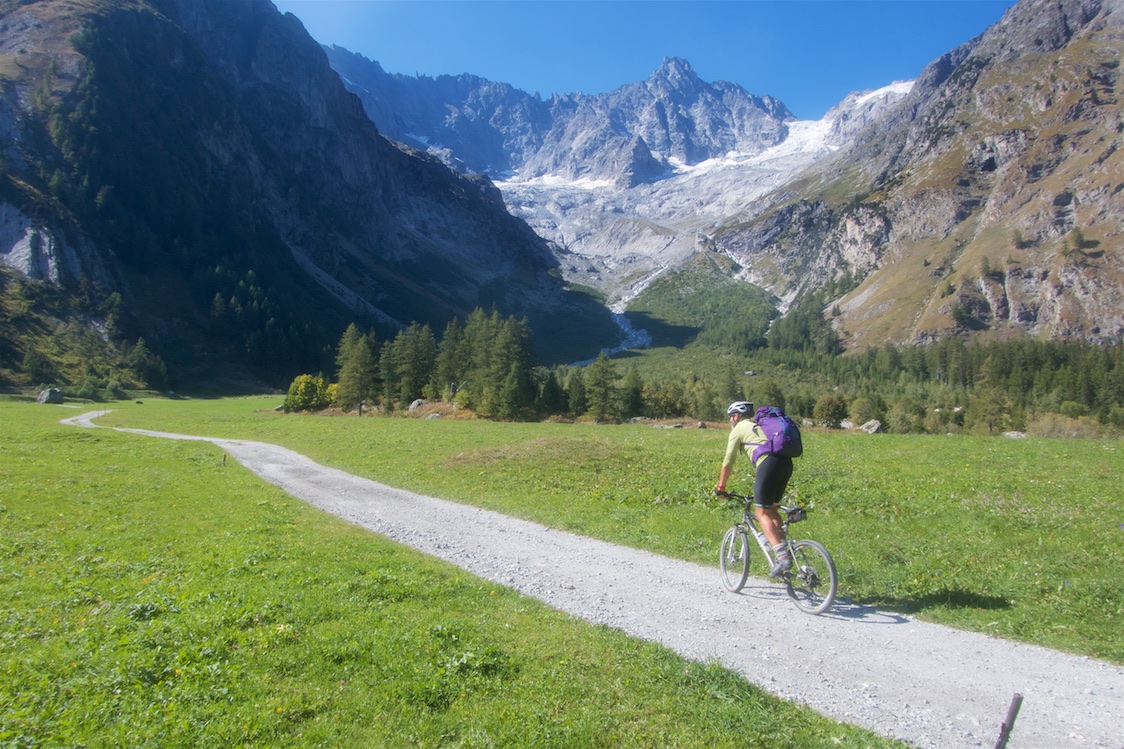 But the day’s adventures were far from over. We soon turned left and took trails for much of the descent. Sometimes very rocky and technical, the trail also had lots of giant tree roots, so it was tough cycling. But much of the trail is a along a ridge high above the main road …. well worth the effort.

The climb to Champex looks relatively small on the above map. But we avoided the main road taking a gravel road that soon became a great hiking trail. But it was occasionally hard work: 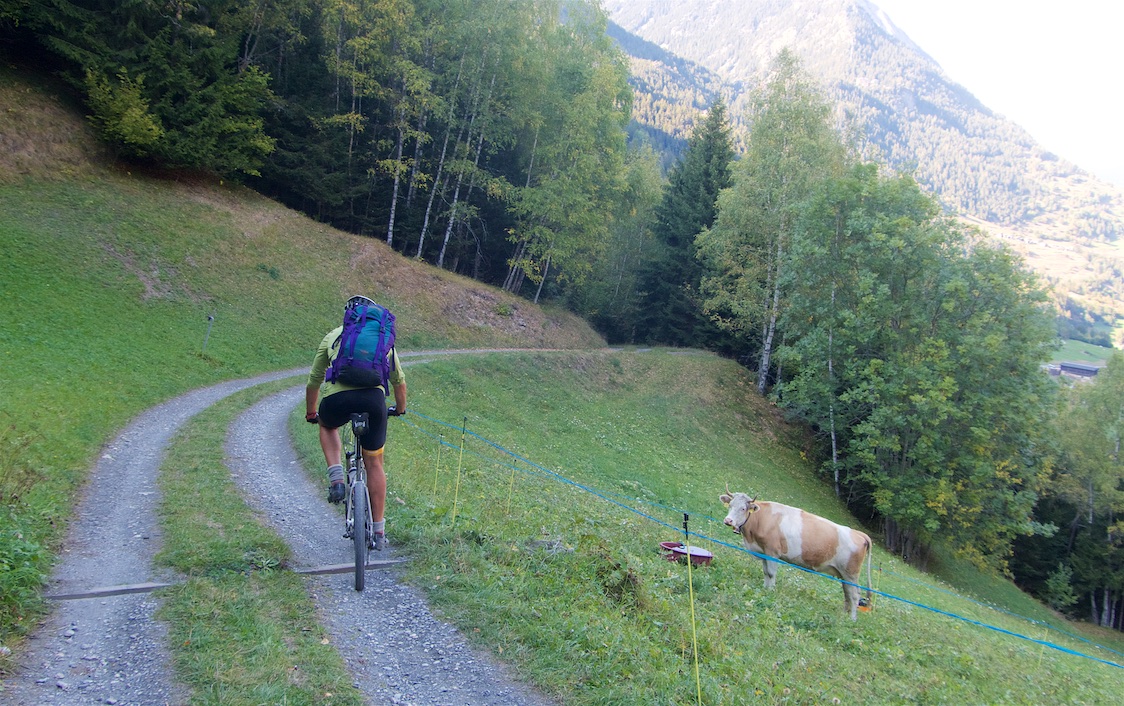 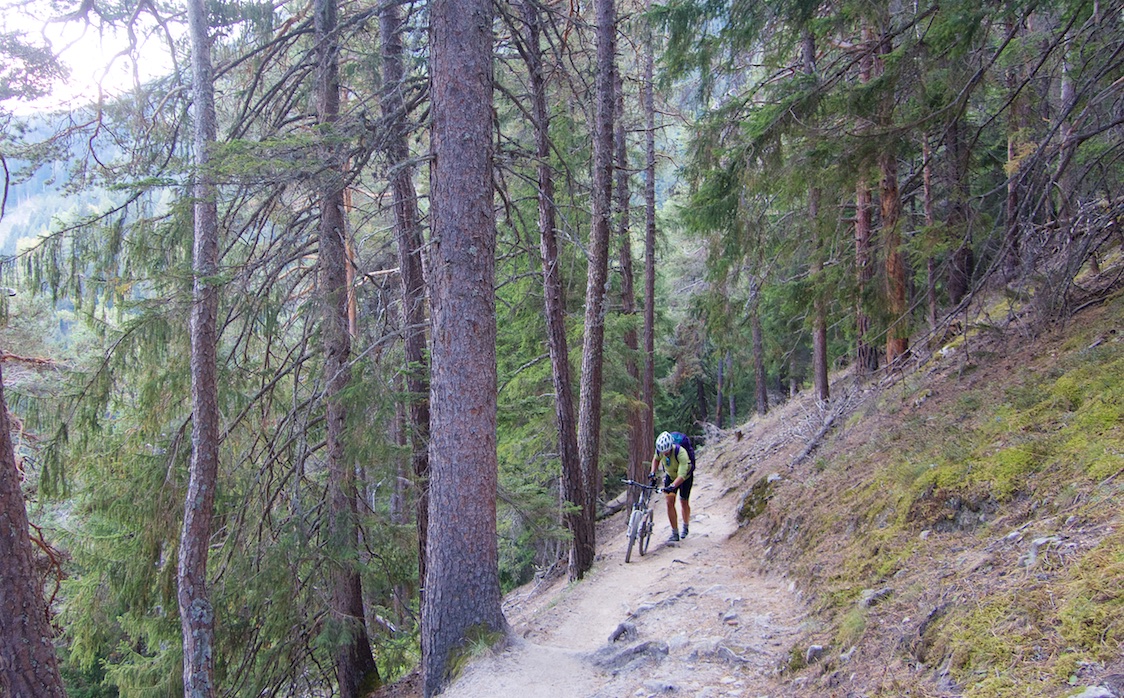 Eventually we reached our destination of Champex and its lake (1466 metres) just in time for happy hour. Wooohooo! Yet again, a brilliant day that was far tougher than the distance or ascent might suggest. But the “easiest” day of our three day loop. 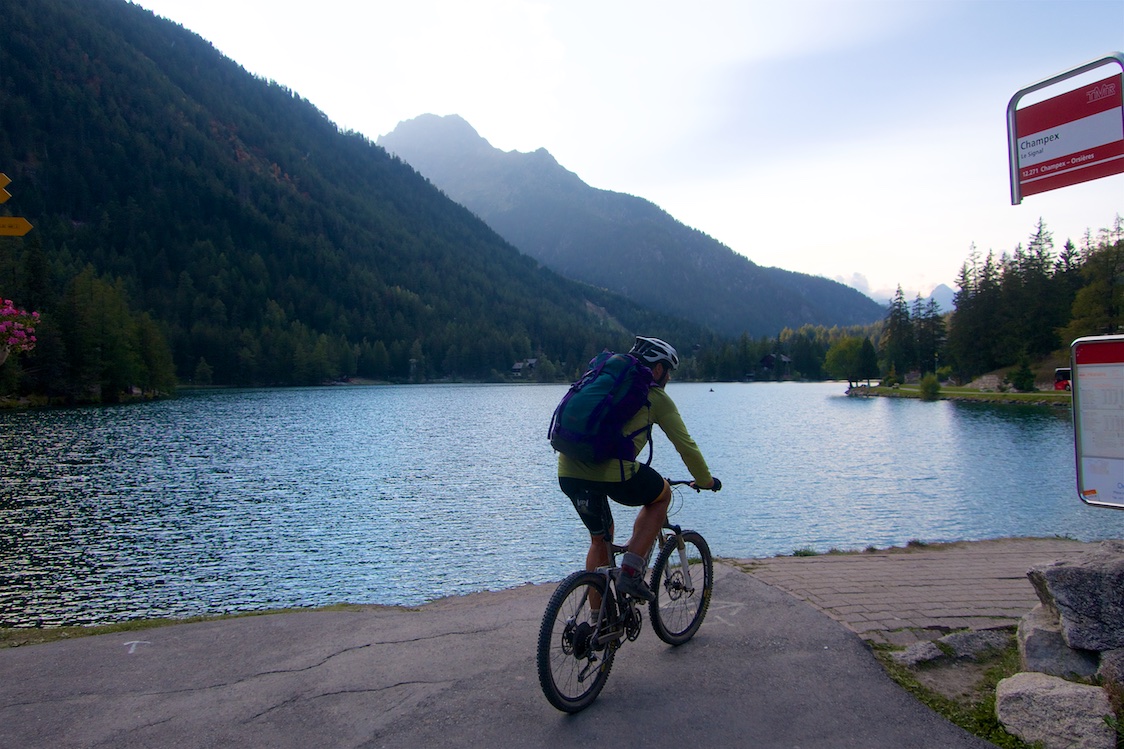