For long-time Tour de France fans, the route for stage 16 may not be that familiar – as it’s been over 40 years since these climbs last appeared in the TdF.

So just for fun, here’s a very brief glance at stage 16 of the 2009 Tour de France. With a bit of info on the start and end towns and a tiny slice of history.

2009 Tour de France – STAGE 16
Bring your passports as this stage starts in Switzerland, then visits Italy, before finishing in France.

The route for this short 160 km stage is quite simple. The riders are either going up or going down – two climbs, two descents.

This strategically located French speaking Swiss town has extensive Roman remains including a well preserved amphitheatre that still hosts Cow Fights. For cyclists, 20 miles to the north is the UCI World Cycling Centre, in Aigle. And to the east, the Valais region with it’s Fendant wine, fruit orchards, and big mountains (including the Matterhorn) is pretty much paradise.

First, a little history: This pass has been used for almost 3,000 years to cross the Alps. Julius Caesar crossed with an army in 57 BC. In fact, one of Caesar’s generals fought a significant battle versus the local Celtic tribe at Martigny.

Today, along the route are signs with drawings commemorating Napolean’s crossing with 46,000 soldiers in 1800. In the 900’s Saint Bernard of Menthon opened a Hospice to provide a safe haven for travelers – the hospice is still operating today. 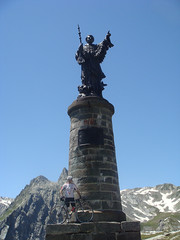 The climb: This is a huge climb. Although the official site lists the climb as 24.4 kms, don’t believe it. It is uphill from the very start – and although not that steep to begin, it is over 40 kms long and almost 2000 metres of ascent.

The first 30 kms or so climbs gently through a scenic valley. It’s actually not the best route for cyclotourists as the traffic is light but fast and there is a very long covered stretch (that’s pretty awful. About 7 kms before the summit, the main road enters a several mile long tunnel until Italy. But the Tour will turn-off here and take the ancient road over the mountain.

Here it gets fun. It is beautiful, steep, and lots of hairpins. Four of the last five kms average 9.5 %. It’s the steepest stretch of the day. 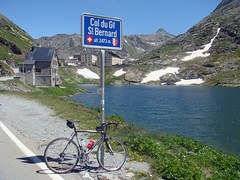 The pass itself is charming. There is a little lake, the hospice, sharply dressed Italian customs officers, several restaurants, and a huge statue of St Bernard himself. It was hard work climbing up the statue with bike cleats. 🙂

The descent is over 30kms down to Aoste. When I rode this side in the summer, the surface was truly awful, with construction was everywhere. It seems they were getting ready for the Tour. 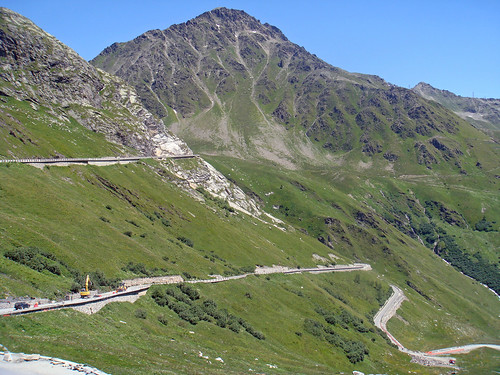 The climb is listed as 22.6 kms, averaging 5.1%. But again, before the climb starts the route will be ever so gently uphill from Aoste. For example the 4 kms before the “start” is about 2% average – starting at Morgex.

The top is the French/Italian border and another giant Saint Bernard du Menthon statue.

Unlike the Grand St Bernard, there are no customs controls – as both EU countries. 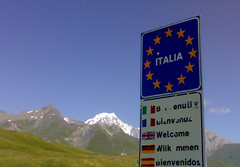 From here it’s about 31 kilometres completely downhill to the finish. the descent is not steep or particularly technical – it will be a hair-raising finish.

Prediction? There are two more mountain stages after today. So it doesn’t need to be a big day for the leaders. A rider that can climb obviously but more importantly someone that descends like a madman.

You guys are the experts ….I would’ve thought of a Salvodelli if he was still racing

The FinishTown: Bourg-Saint-Maurice, France This is a great base town for cyclotourists. At the start of loads of climbs including five giants – Cormet de Roselend, Les Arcs, La Plagne, Petit St Bernard and Col de l’Iseran – the highest and longest pass in France (the top of Bonette is not a pass). It is also the last stop of the high speed train into the Alps. So access is far but relatively easy from Paris.