Stage 16 celebrates the first great Pyrenées Stage in Tour de France history a century ago in 1910, by including the same four climbs from that stage. Admittedly, in 1910 the stage was 326 kilometres versus only 200 kms this year. Those old guys were tough.

Yes, that was the famous stage where the winner Octave Lapize yelled “Vous êtes des assassins (you are murderers).” at the stage organizers.

A couple of year’s back French magazine Le Cycle published a list of the 30 most beautiful climbs in France. Not surprisingly, all four climbs in this stage appeared on the list.

So, another huge mountain stage featuring some of the most famous climbs in France. And while the finish is disappointingly far from a mountain top, the stage is difficult enough that we should see some serious suffering in the tired peloton. This is a stage full of history – and it won’t be dull.

Let’s walk through each of the 4 climbs:

Col de Peyresourde has been in the Tour over 50 times. Rarely decisive, it is usually climbed from this east side heading towards Aspin and Tourmalet.

The list of Tour riders first over Peyresourde is long and illustrious including four times each for Jean Robic and The Eagle of Toldeo Federico Bahamontès, and three times for my favourite: The Badger, Bernard Hinault. 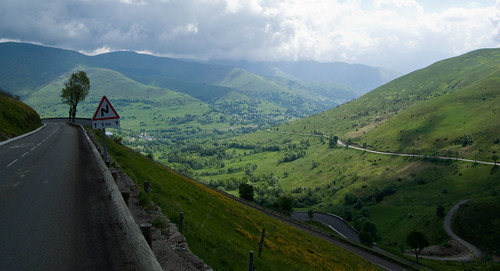 The climb starts at the village of Garin, coincidentally the same name as the first Tour de France champion Maurice Garin.

For the sightseers: Along the climb are some beautiful old romanesque churches with well preserved frescoes.

From the start in Arreau, the riders will just about be able to see the to top of this beautiful climb. Appearing more than 60 times in the Tour, Aspin – like today – is regularly used as an “amuse bouche” or appetizer for Tourmalet. 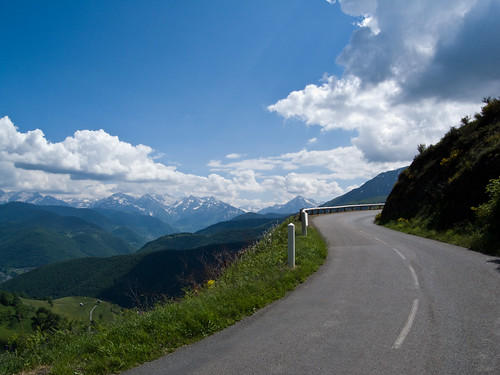 It was on Aspin in 1936 that Sylvère Maes dropped Antonin Magne and went on to win the 1936 Tour. More sinisterly, in 1950 Gino Bartali was attacked by spectators here leading to the entire Italian team going home.

For the sightseers: From the top of Aspin the views are spectacular including a first look at Pic du Midi as they head for Tourmalet.

It has appeared in the Tour de France more than any other climb – only being omitted a dozen or so times. Descending from Aspin, the Tour route skips the first 6 or so easy kms in the profile above. Still the start is leisurely easy, but don’t be fooled, once you reach Gripp the fun begins: the last 12 kms average about 9% – this is a tough climb.

The official Tour site says that this stage is a little tribute to Eddie Merckx who won a similar route in 1969 after a 180 km break-away. Famously, Merckx attacked his team-mate Van der Bosche, passing him before the summit, later saying it was in anger and disappointment because his team-mate had announced the day before that he would be leaving the team.

The last stretch of the climb is through the ski slopes above La Mongie: 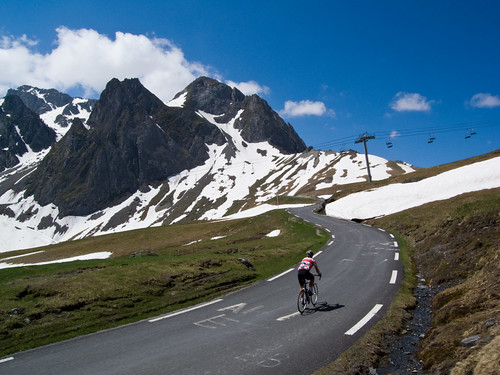 Without a doubt, the second most famous climb in the Pyrénees after Tourmalet. The average grade is misleading as there are long flat points and even a descent – after first passing Col du Soulor. It has appeared roughly 70 times in the Tour. The long list of champions first over this col include Bartali, Coppi, Robic, Merckx, Gaul, Bahamontès, Jalabert, etc. 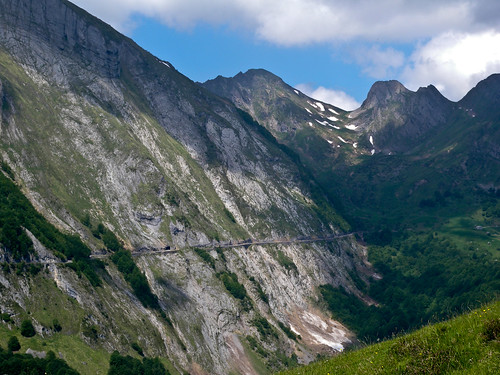 It was here in 1951 that Wim Van Est – while wearing the yellow jersey fell off the cliff – somehow avoiding serious injury.

Unfortunately, the top of Aubisque is 60 kms from the finish line. But as we saw on the stage 9, the long descent after Madeleine didn’t stop the mountains from causing havoc. This will be an exciting stage.