It had never occurred to me that the legendary Joux Plane might be rideable in winter.

But while skiing at Les Gets a couple of weeks ago, I could see in the distance a few cars at the top. I had to investigate. It turns out there are about 30 kilometres of nordic skiing trails at the Col and they try and keep the route open.

Col de Joux Plane is one of the few Tour de France climbs where Lance Armstrong suffered, being handily beaten by Virenque in 2000. In 2006, It was also the final climb on the “miracle” comeback day by Landis

The last time I was here it was during a heat wave at the end of Morzine Vallée d’Aulps Cyclosportive
– today was a little colder!

On another perfect day, Eric and I set off from Morillon. As often happens on sunny winter days, it was far (far) colder down in the sun-starved valley. But after a five kilometre warm-up, we hit the steep but sunny lower slopes of the climb.

At only 12 kilometres, this (harder) west side is probably as short a hors categorie climb as you can find. But it’s ever changing slope makes it hard to get a rythym and there are a couple of extremely steep stretches in the first half of the climb

Surrounded by high alps – including Mont Blanc – the ride was just too beautiful. Eric went ahead to stretch his legs, while I took the occasionally photo break, and enjoyed the mountain air.

At the top, indeed were nicely groomed Cross-Country and hiking trails. As an added bonus, the little restaurant was open. On a sun-filled terrace with Mont Blanc staring us in the face, we enjoyed savoyarde beer and crepes. Nice!

And then an authentic French cycling experience: The tremendously competent older lady running the auberge, came over to our table with some newspapers (The Dauphiné Libéré!), and told us the descent would be cold and we should put these papers under our jerseys to shield the wind. Merci, Madame! 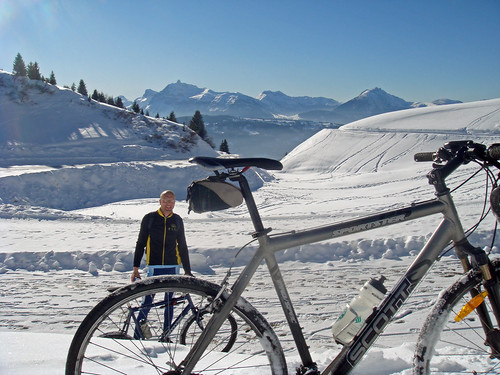 Do not try this in winter on a road bike. While the road surface was generally pretty good, there was still plenty of ice around – and snow near the top.