This is exciting: a beautiful new high Alps paved road (and the top 6 kilometres are closed to motor vehicles).

The Trois-Vallées Ski Domaine claims to be the largest in the world. Each of the three valleys features a famous ski station: Courchevel, Méribel, and Val Thorens. They are separated by high mountains covered in ski slopes. The paving of the road to Col de la Loze is a first step to linking all three valleys with a high paved road just for cyclists. 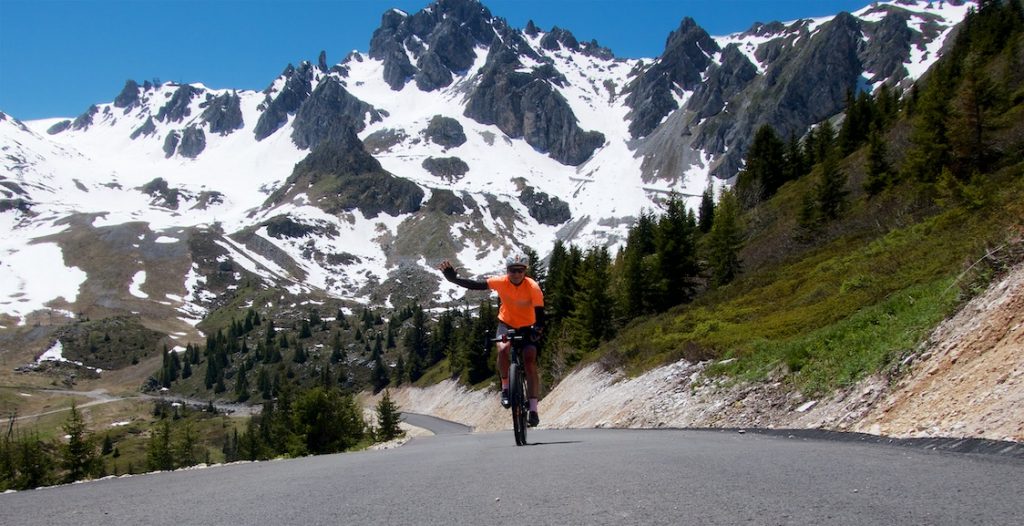 Previously, one could road bike above Courchevel until the airport at roughly 2000 metres. The climb to Col de la Loze at 2304 metres includes six newly paved kilometres above the airport. Méribel is directly down the far side of the Col.

I’ve seen a few people complaining about paving a quiet gravel road. But let me tell you there are endless other superb gravel roads in the Trois-Vallées. For example: Here is a 7 col ride above Méribel on the far side. Here is a very high 3 col ride high above Courchevel to the east. Here is a ride to 3000 metres (!) high above Val Thorens. etc.

It’s a big climb. Below, in the profile, I’ve used the stats from the “official” start at the D91A turn off to Courchevel (845 metres). But I started in Brides-les-Bains and it’s 4 uphill kilometres to the start intersection – see map at bottom. 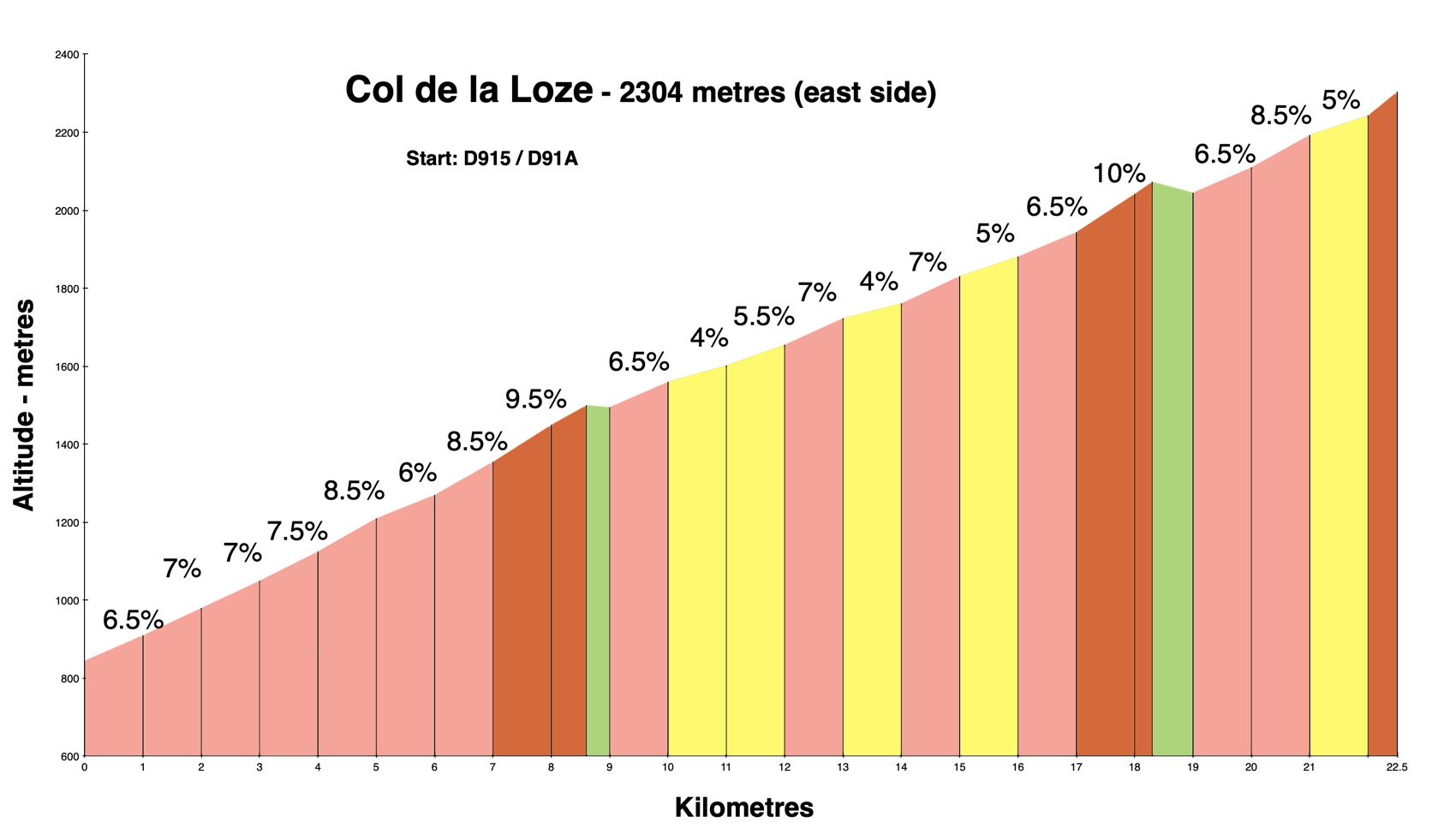 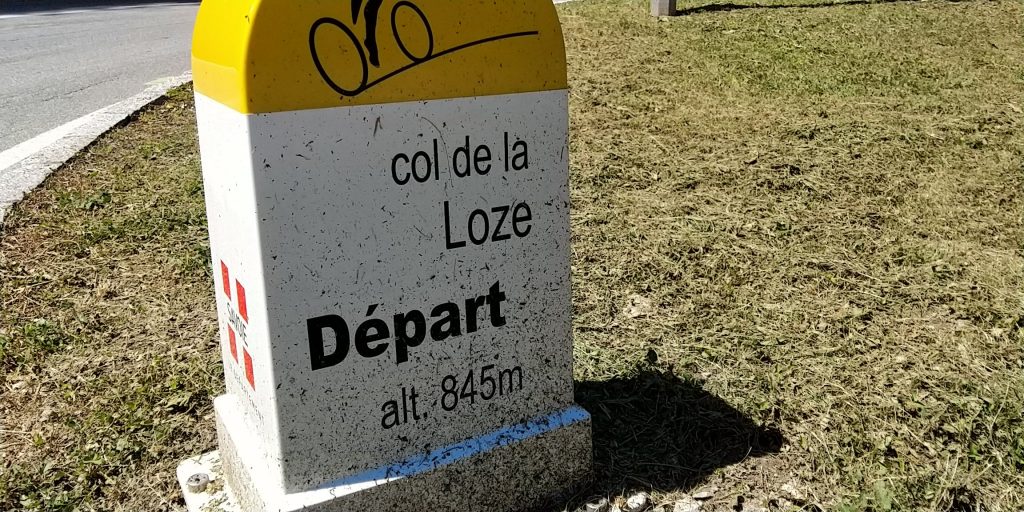 The majority of the climb until the airport is a wide modern ski station road. It’s fine, but beware there is some traffic as there are lots of villages here. The higher you get, the quieter the climb.

At roughly 1300 metres at La Praz is the Ski-Jump from the 1992 Albertville Olympics: 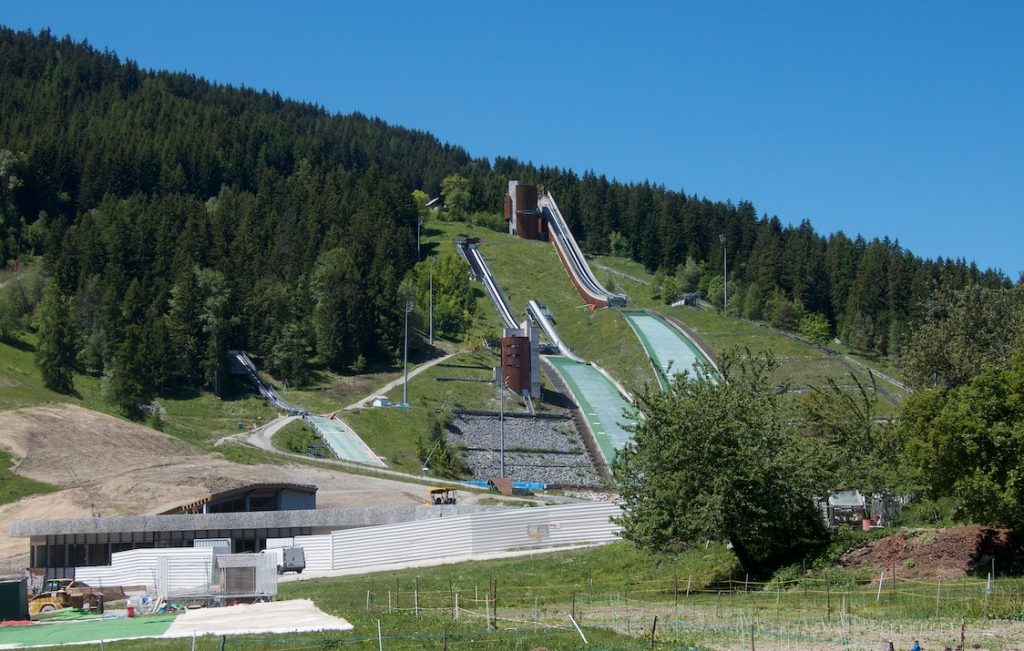 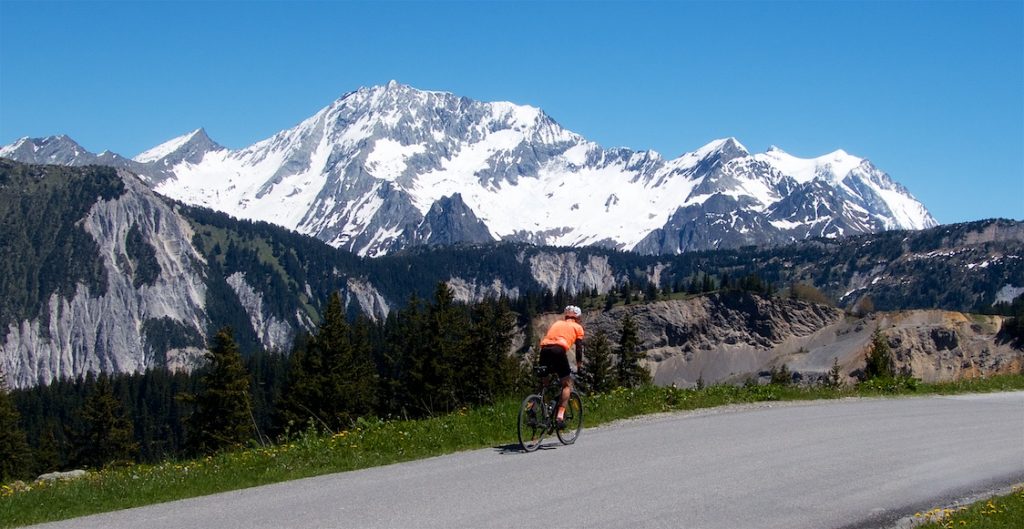 But it’s the last 5.8 kilometres where this new climb gets exciting. It used to be a gravel ski-lift service road. Now it’s paved and bike-only: 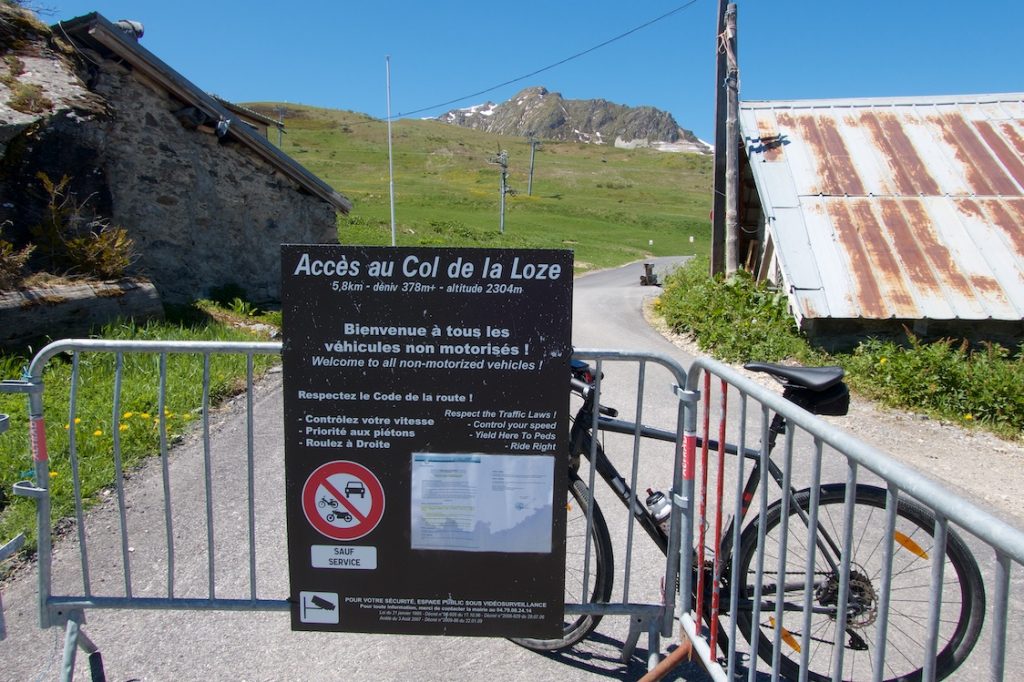 While the first 17 kilometres are generally a steady climb, these last 6 kilometres are all over the place. Ramps to 16%, a downhill section, etc. But …. it’s stunning and car-free.

The tourist board is doing a lot of promotion for Col de la Loze. It will appear in Tour de l’Avenir in August. There are also some time trial days open to everyone (May 12, June 30, July 28). See here for details. I guarantee you that it will be in the Tour de France very soon. 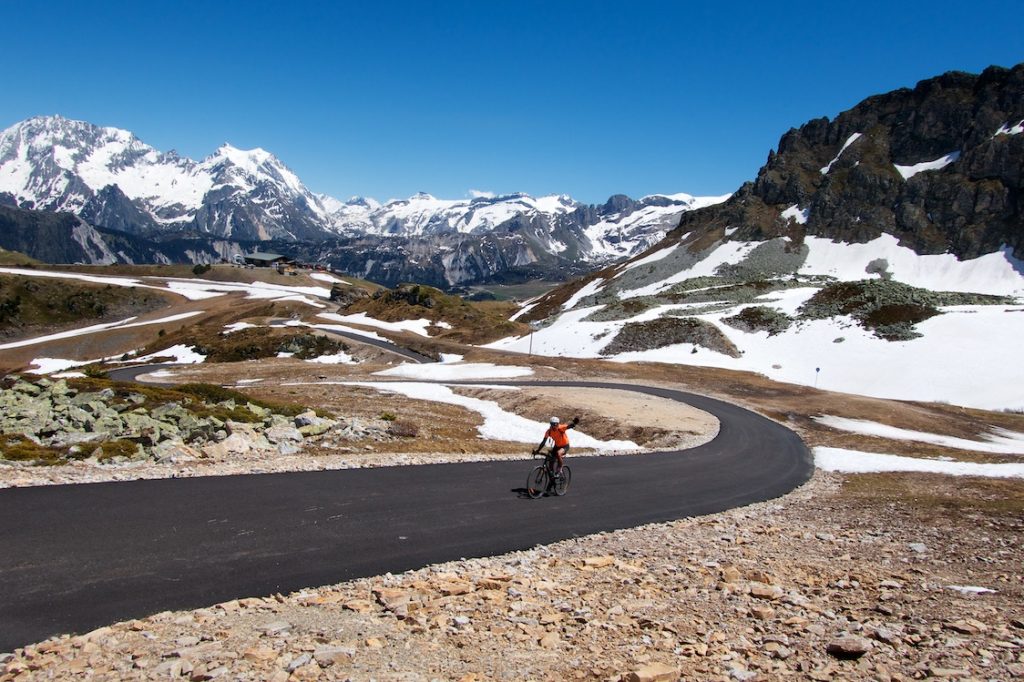 The far side is gravel and the plan is to pave it. It was marked as closed but I had my gravel bike and began the descent. They are in fact well along in preparing the road to be paved and I was passed by a guy steam-rolling the gravel: 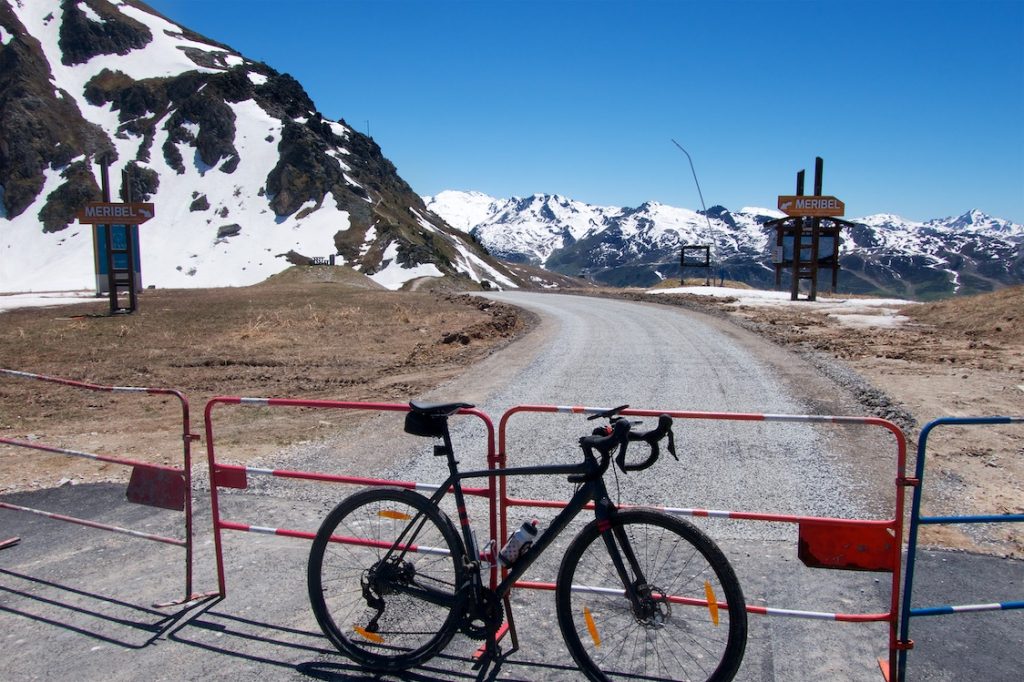 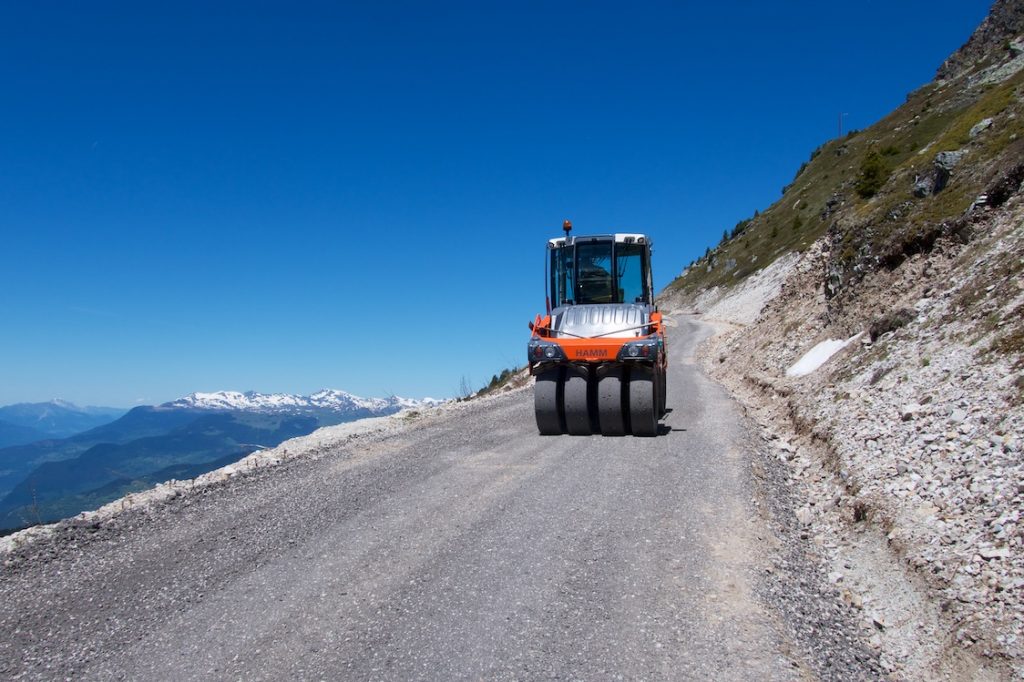 It’s roughly 6 kilometres down to Méribel Airport then Méribel. From there, I simply took the main road down to Brides-Les-Bains. See here for details of the paved climb to Méribel.

If you plan to “go-over-the-top” I would recommend doing it on a weekend as they will be clearly doing a lot of work on the Méribel side and the work-crew may be less tolerant than they were with me.

October 2018 I did a 7 col ridge mountain bike ride on the far side of Méribel and said: The high point of the ride is the top of a Méribel chair-lift on a peak called Roc de Fer (2290 metres). From here I had great views of the other side of Méribel. It looks like some fun and high riding possibilities.

And the photo below shows the Méribel side of Col de la Loze directly across in the middle of the photo: 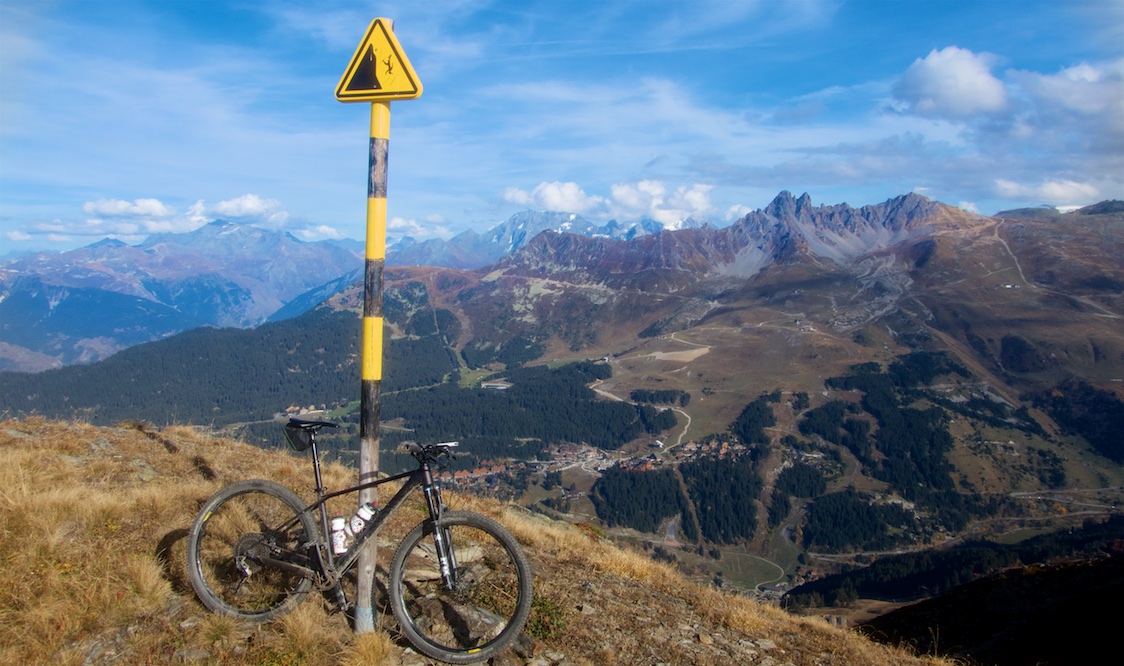 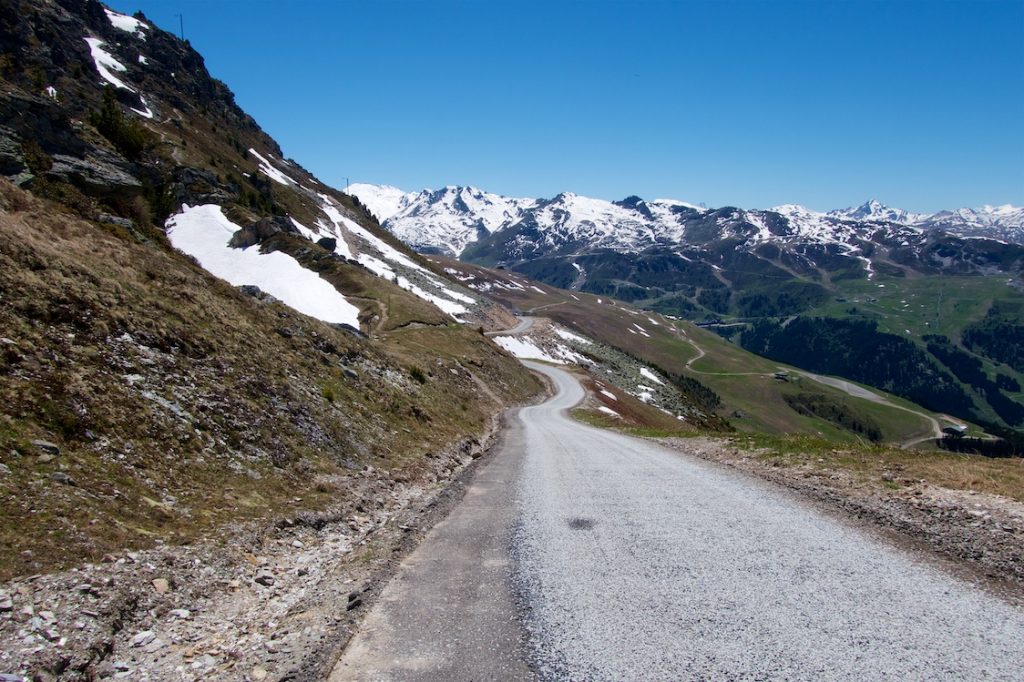 The top 6 kilometres of this huge climb are car-free and beautiful.