A route planning tip: Sometimes I just look for a bunch of hairpins on a map:

My plan was to ride up to Col de la Madeleine via an unpaved hairpin-filled forest road north of La Chambre. This would lead to the high ridge above the standard Madeleine road – only joining the paved road at its last hairpin.

In the image below, my route is red (there is also a detailed map at the bottom of this post). The blue route shows the two paved ways up this south side of Col de la Madeleine. 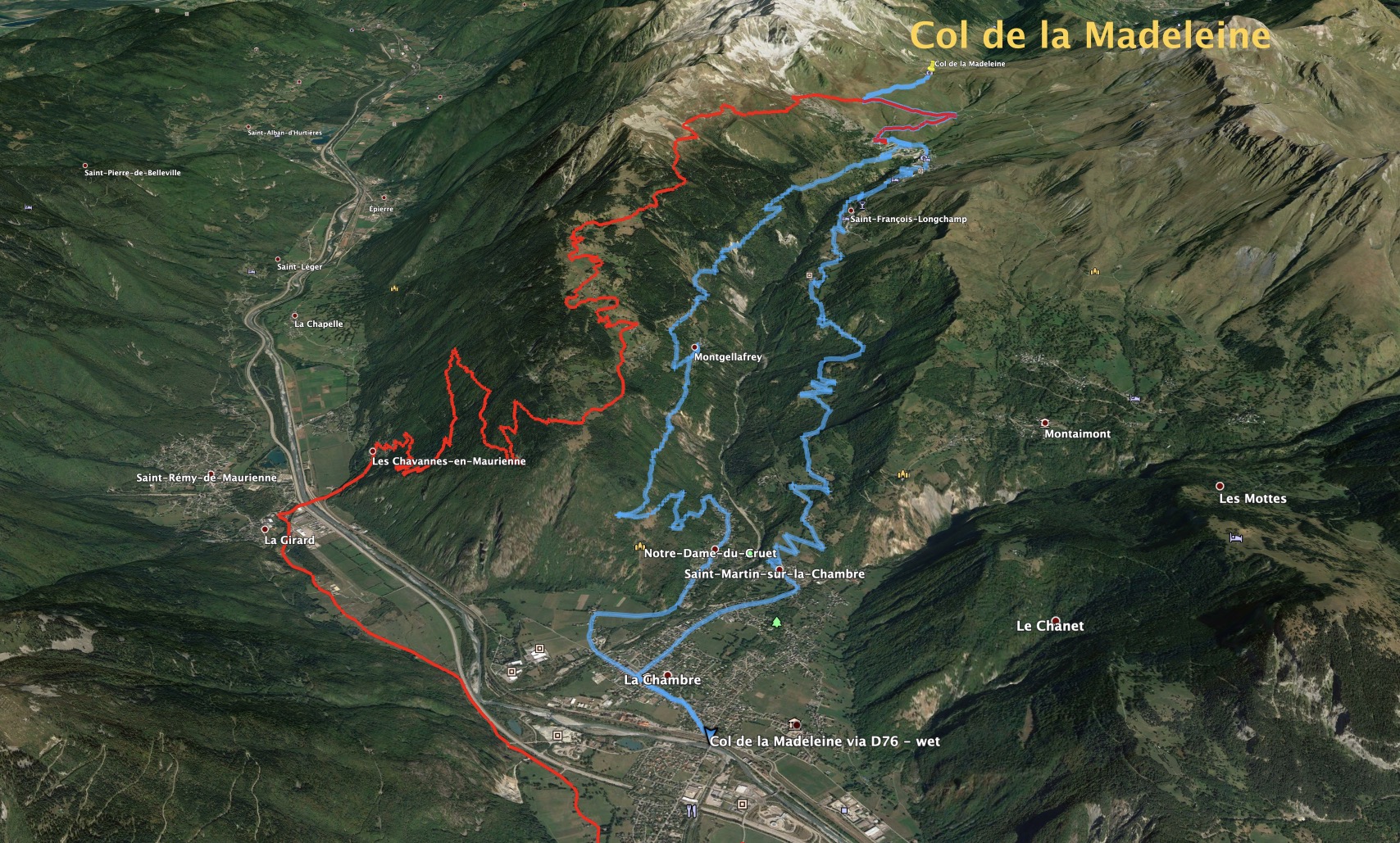 The paved option on the left, via Montgellafrey, is scheduled to be in the 2020 Tour de France. It is the quieter, less famous option and it would be its TdF debut.

My climb begins on a little road just below the perched village of Les Chavannes du Milieu. It soon becomes a dirt forestry road. It’s a decent enough surface and has regular views of the mountains across the valley. I started the ride counting hairpins out-loud but stopped after 30 or so.

At roughly 1300 metres altitude the route joins a paved road on the way to Lac de la Grand Léchère. It’s a beautiful stretch. 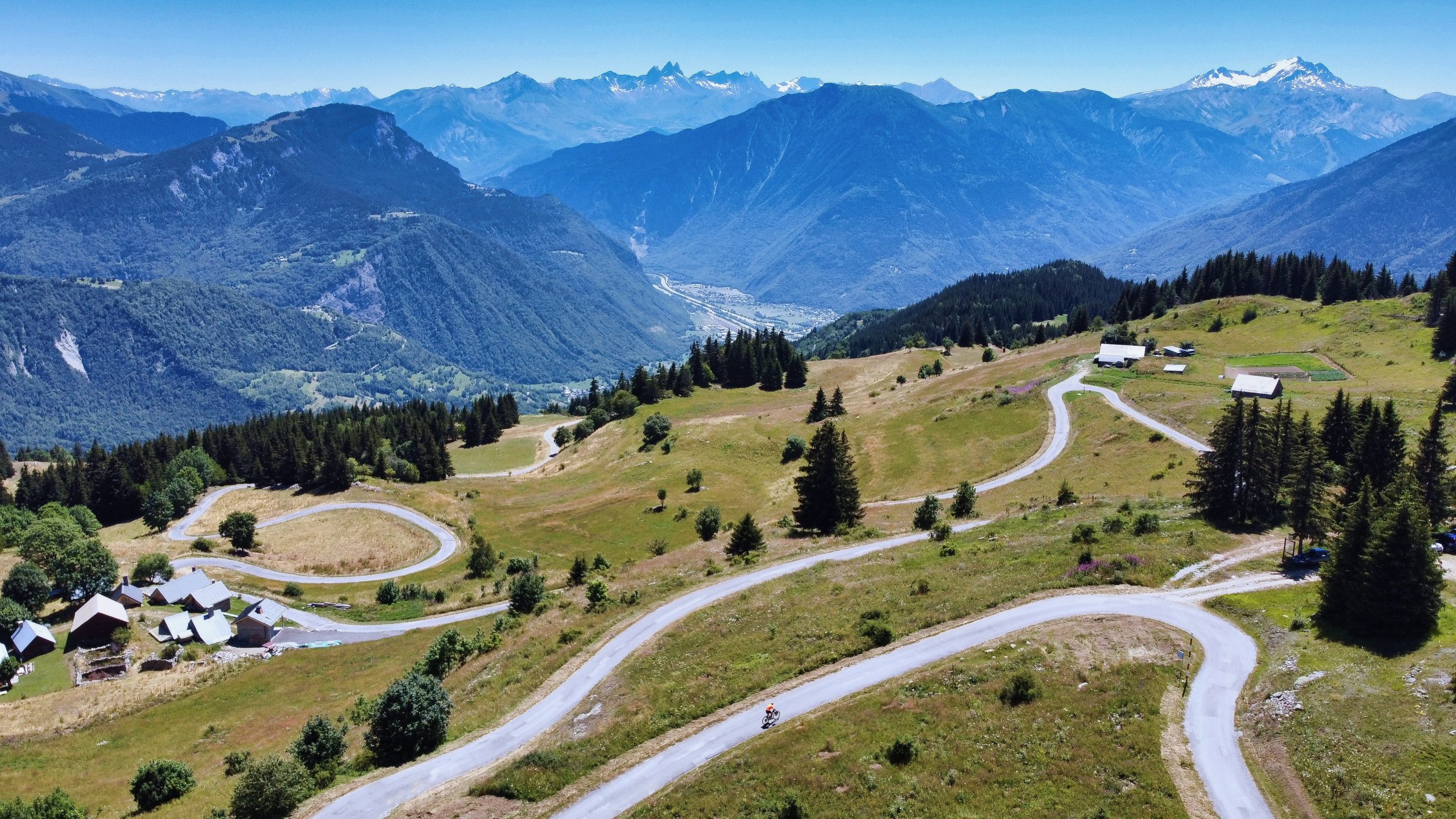 The lake is at 1680 metres. The paved road ends and it becomes a rough gravel road until just over 2000 metres altitude. Note, it’s possible to reach the lake on a fully paved route – see this ride. 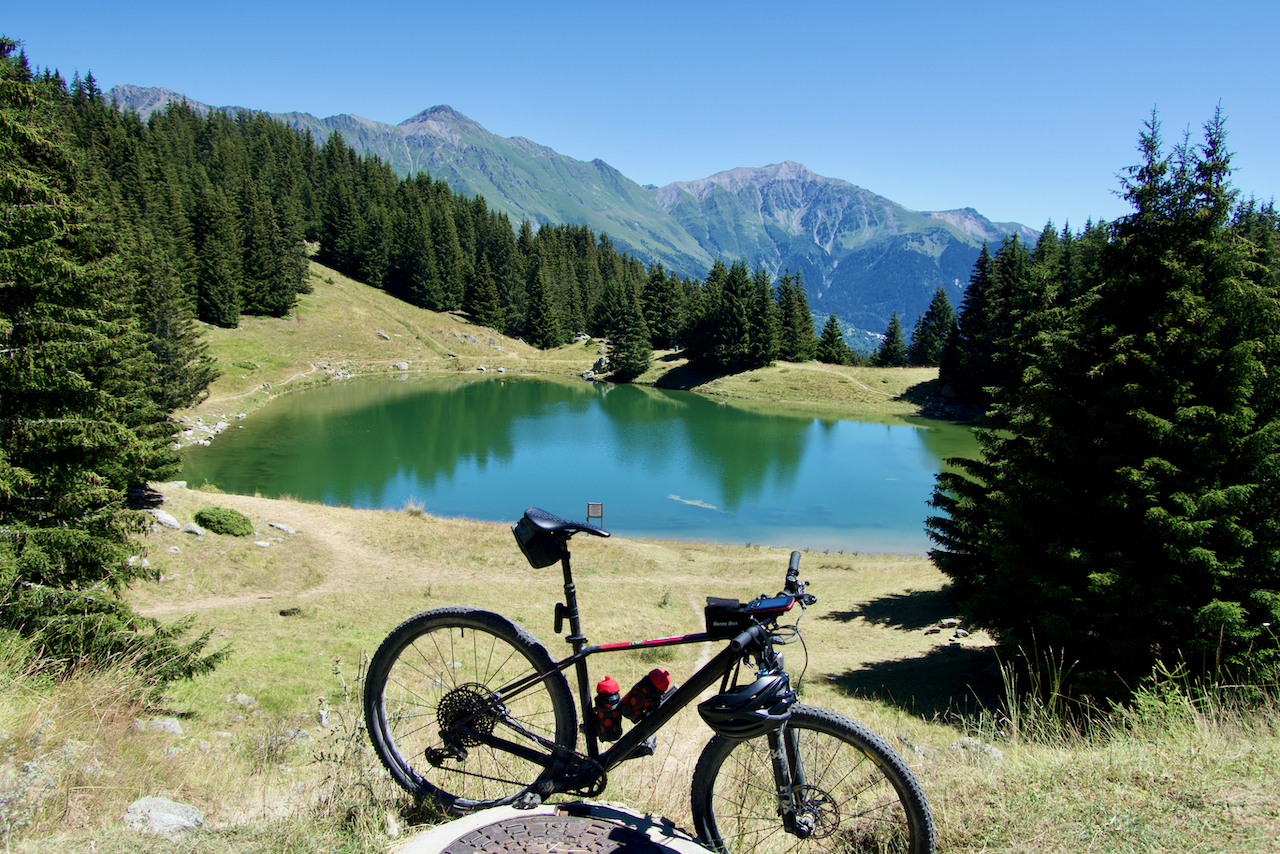 After the lake it’s great cycling along the ridge parallel and high above the Madeleine paved route far below.

Throughout the ride I could occasionally see Col de la Madeleine far in the distance. 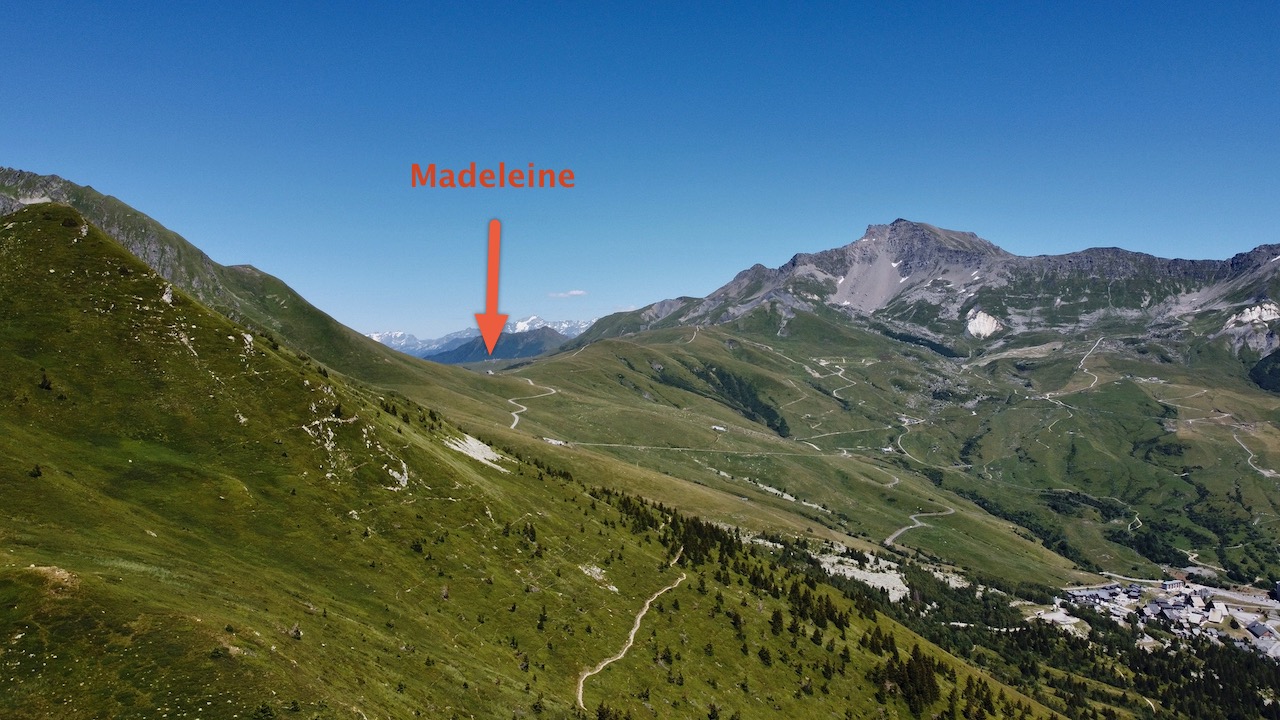 The gravel road peters out at 2010 metres at La Mère de l’Eau. It’s a hiking trailhead. From here it’s roughly 3 kilometres to a junction with the last paved hairpin below Col de la Madeleine. I’d estimate that between 25% – 75% of the trail is ridable depending on your ability. 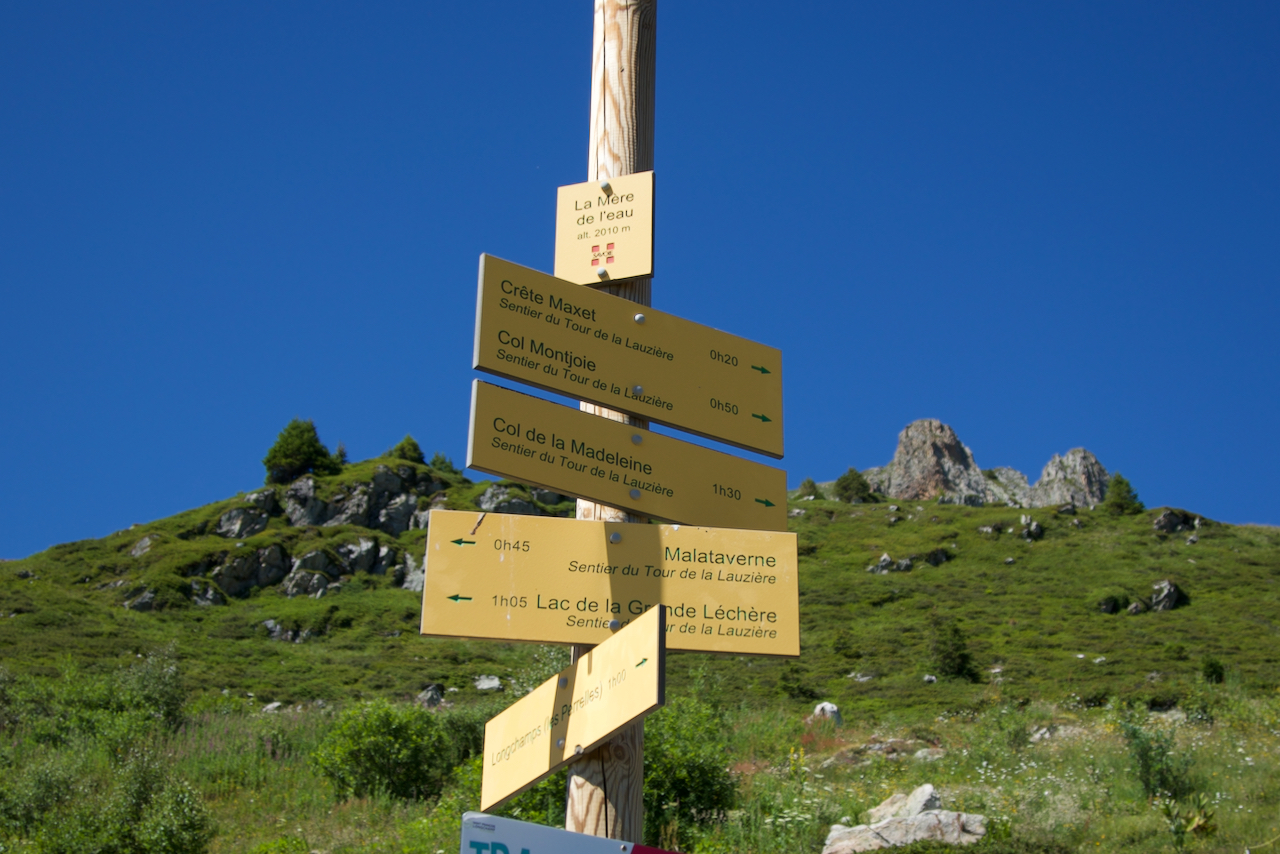 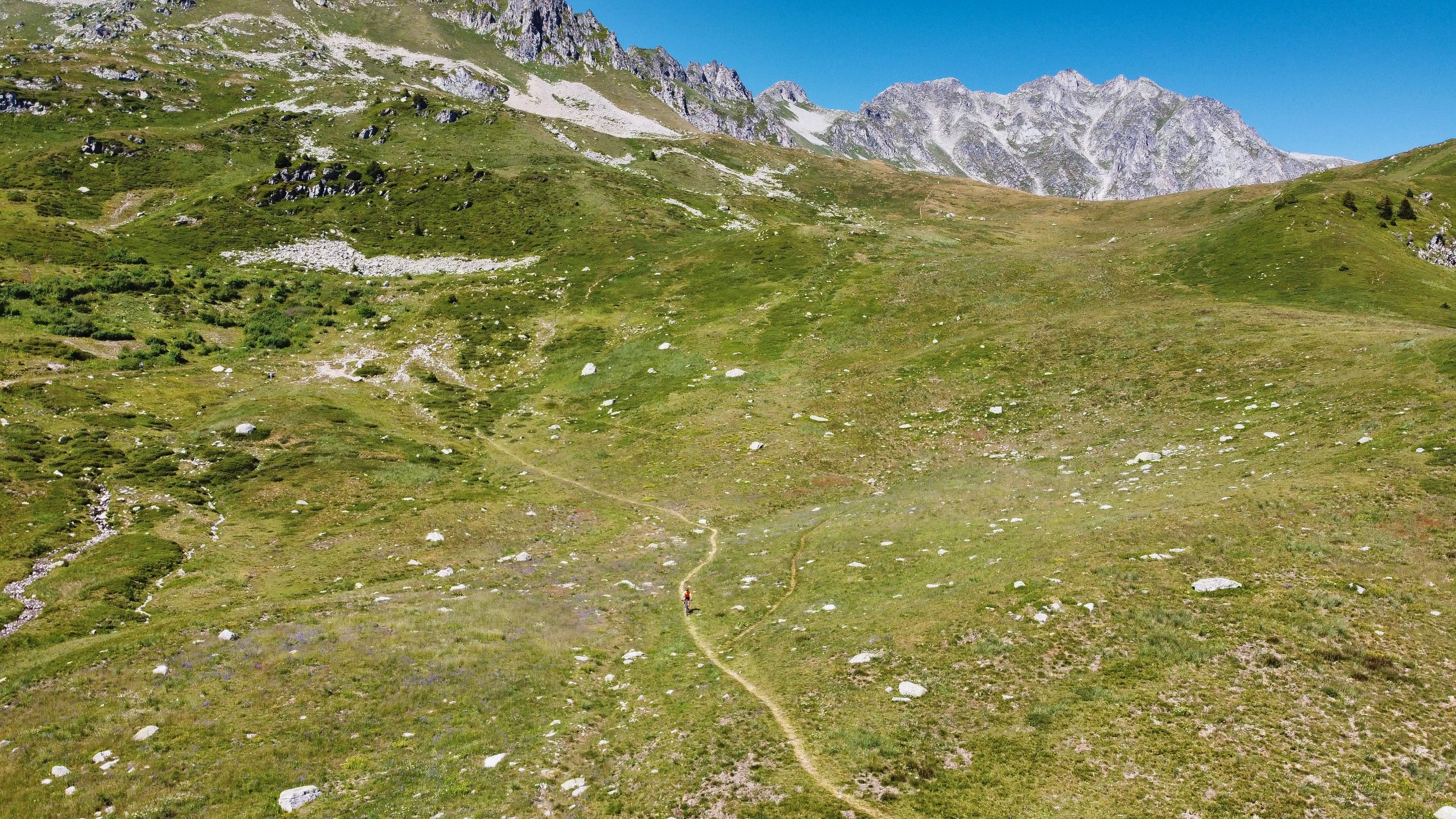 When I was within 750 metres of the road, I heard something. Damn, a flat tire.

I decided to walk to the main road and try and fix it. I am an idiot. For some reason the valve on my spare tire was different than the valve on my pomp (I thought the pomp was reversible). I had a patch kit too but couldn’t find the hole. It was hot, I was out of water and thirsty. I asked a couple of cyclists if they had a mtb pump but no luck.

So …. I hiked down to Saint Francois-Longchamp. I found a very friendly hotel/restaurant that rehydrated me and found me a taxi willing to drive up a mountain and carry a bike down. Plan B would have been hitchhiking. Plan C would have been to hike/run another 20+ kilometres It’s only my 2nd taxi rescue in two decades of cycling the Alps.

Of course, what really upset me was that I didn’t quite reach Col de la Madeleine. 🙂