A fun heat-wave ride. It’s a good route when the best hairpins of the day aren’t Les Lacets de Montvernier.

The Maurienne Valley is filled with famous cycling climbs (Galibier, Glandon, Madeleine, Iseran, Croix de Fer, Mont Cenis, etc). But the goal today was to visit something new for me: Col de Sapey. It’s fully paved, but not well known. A 10 kilometre climb with perhaps 20 hairpins. And I wouldn’t see a single car. Zero.

See here for 15 rides in the Maurienne Valley. I’ll add this ride to the post soon.

I started at the base of the famous Les Lacets de Montvernier as it was near my main goal. It’s only 2.5 kilometres long, but always fun.

Above are drone photos. The only other way to get a good view of all the hairpins is to go to a hidden cliff look out for this view: 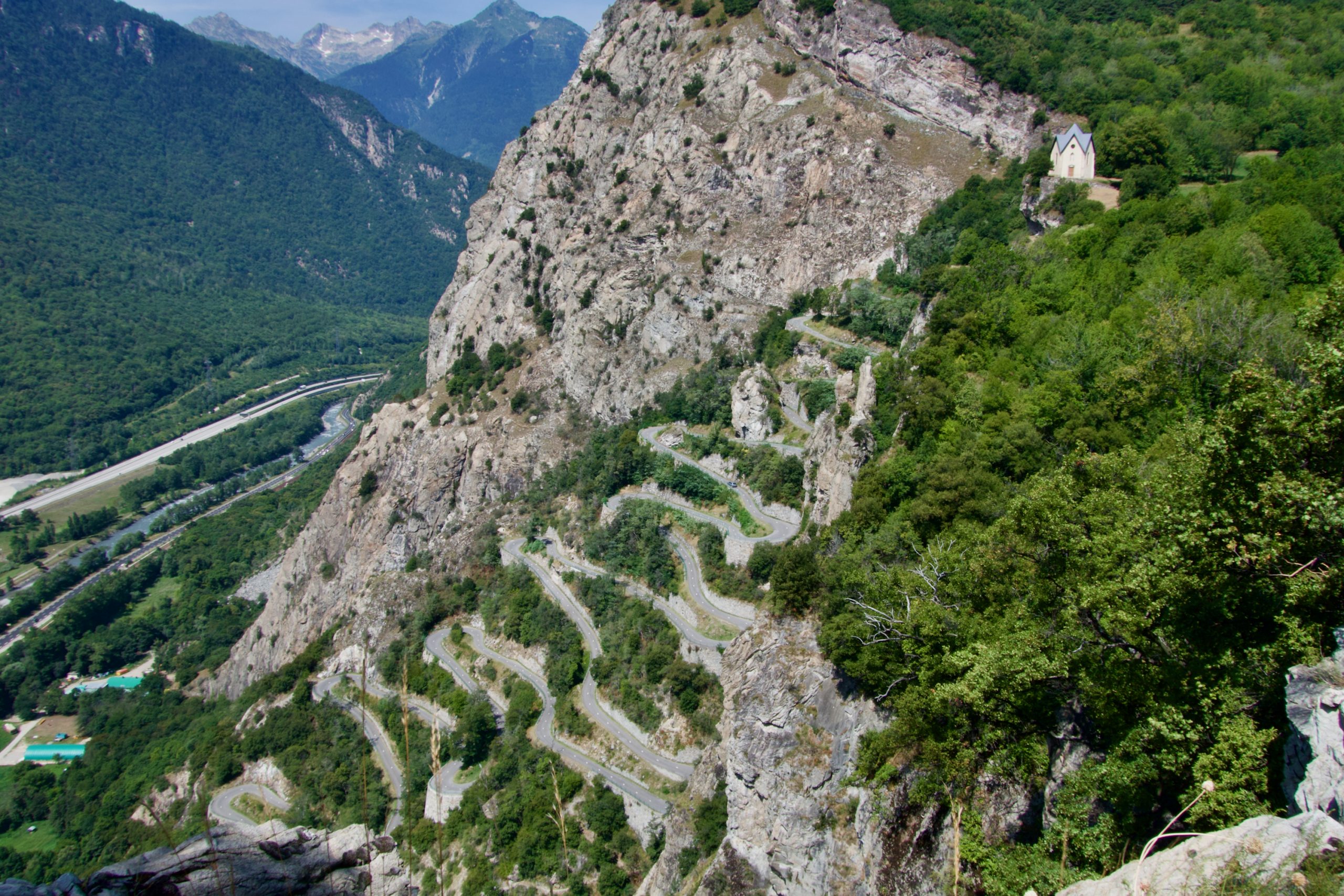 Here’s how to find this cliff look out: after the hairpins, the road has a farm field on the right. There is an unpaved dirt “road” through this field. It gently descends for a few hundred metres. There is a tree line blocking the lookout, but a path leads in. It’s only 10-20 metres from field edge. 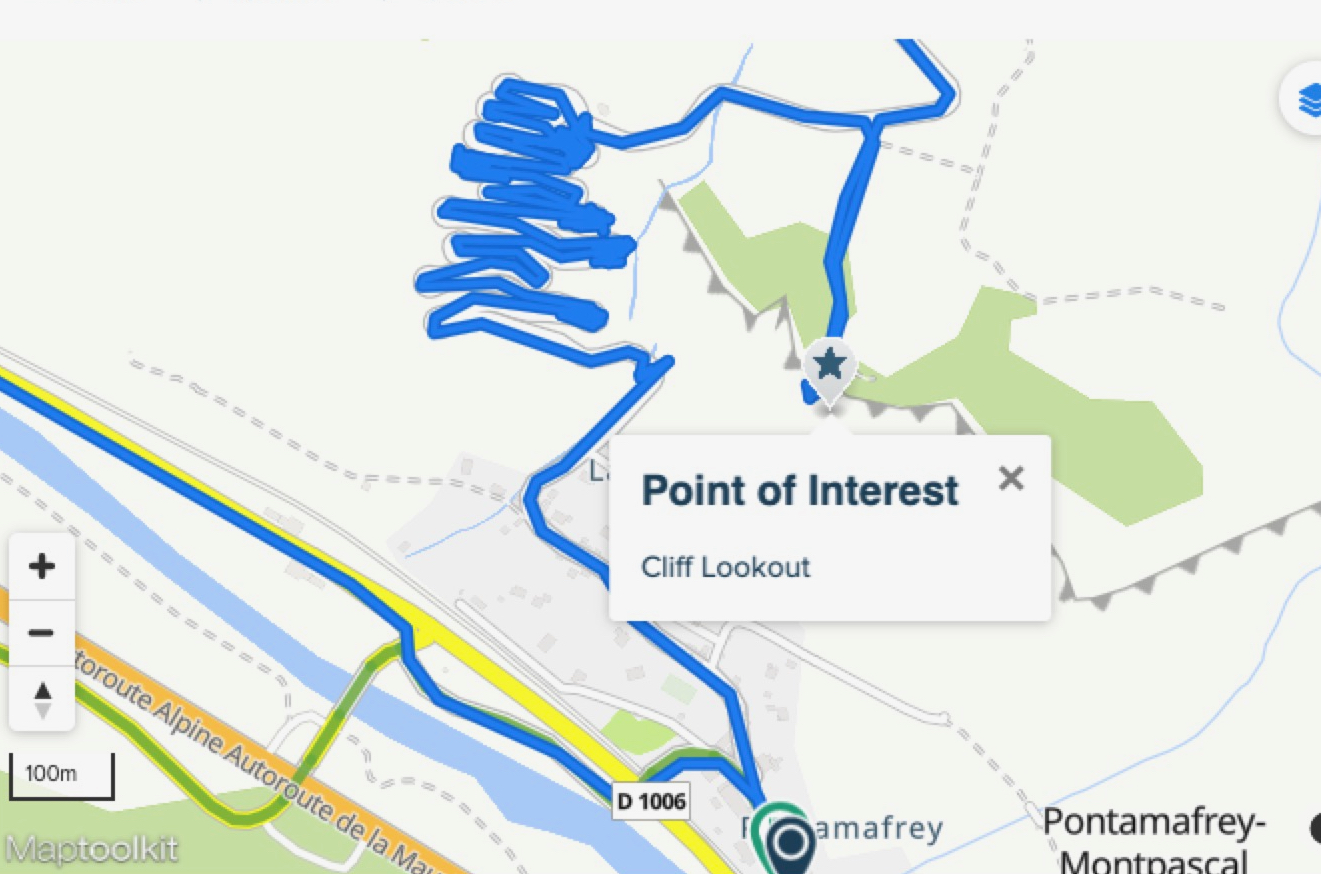 Usually after Les Lacets I would climb to Col du Chaussy and then gravel to Col de la Madeleine. It’s a favourite route. See here for an old post that incudes a fairly good video of Les Lacets.

But today, I turned right and headed down towards the valley floor. At the 10 kilometre mark on the map below, I would turn up onto a small road beginning the climb to Col du Sapey.

Note, as marked on the map profile I would pass Col du Ventour (780m). Woohoo.

Despite it being high-season, I would not see a single car on the next 10 kilometres up to Col du Sapey. It’s a hairpin filled, winding road. In the photo below, all the road in view above the valley floor is the same route. 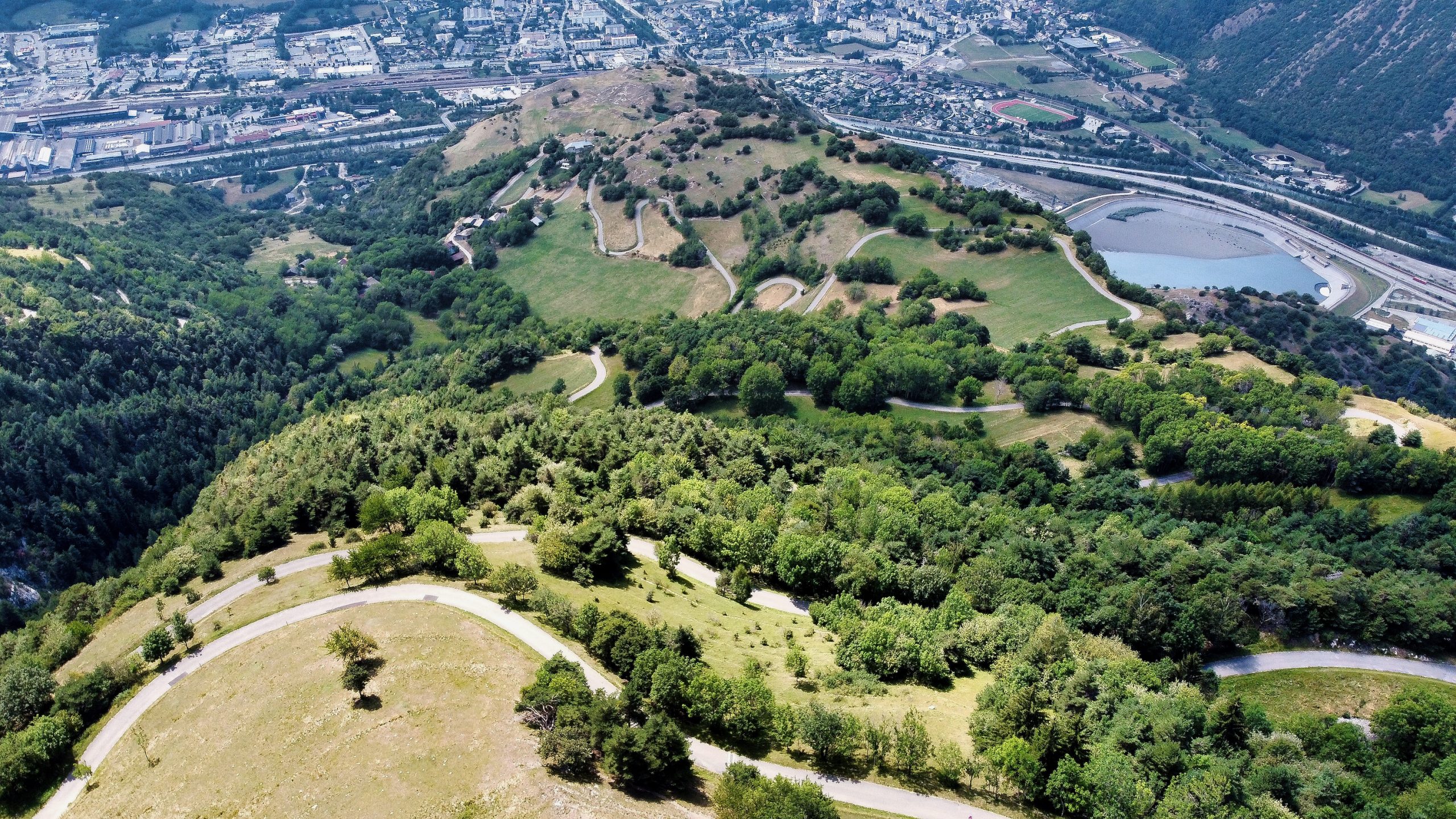 It’s worth remembering that while Les Lacets de Montvernier are super fun, they are quite tiny. See this photo for perspective. 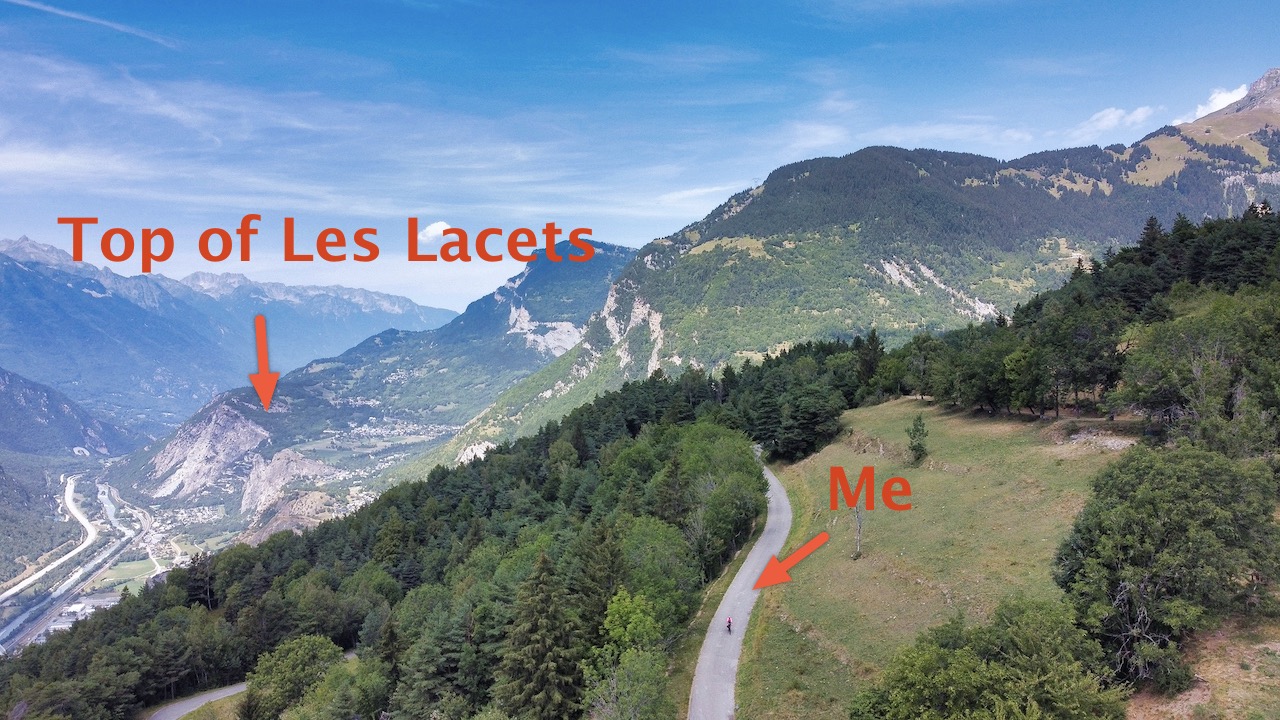 The final 2 kilometres to Col de Sapey are extremely steep with stretches of perhaps 14-16% on a paved but rough road (be cautious if descending this). The Col itself is at 1306 metres but – according to the Club des Cents Cols – is not an official geographic col. But the Maurienne Valley tourist board has perhaps for marketing purposes named it a col, and in fact have recently begun including it in their annual program of bike-only car-free days.

Descending the other side the route soon intersects with the paved road up to Montdenis. Because of the heat wave, I decided to abandon some gravel ideas and simply descend. I’ve cycled to Montdenis – see here for details. The descent is on a truly crazy road cut into the cliff above the ugly valley floor (the industrial part of St-Jean de Maurienne).

The photos only capture a part of the this road. Wow? Yes, the best hairpins of the day. 🙂 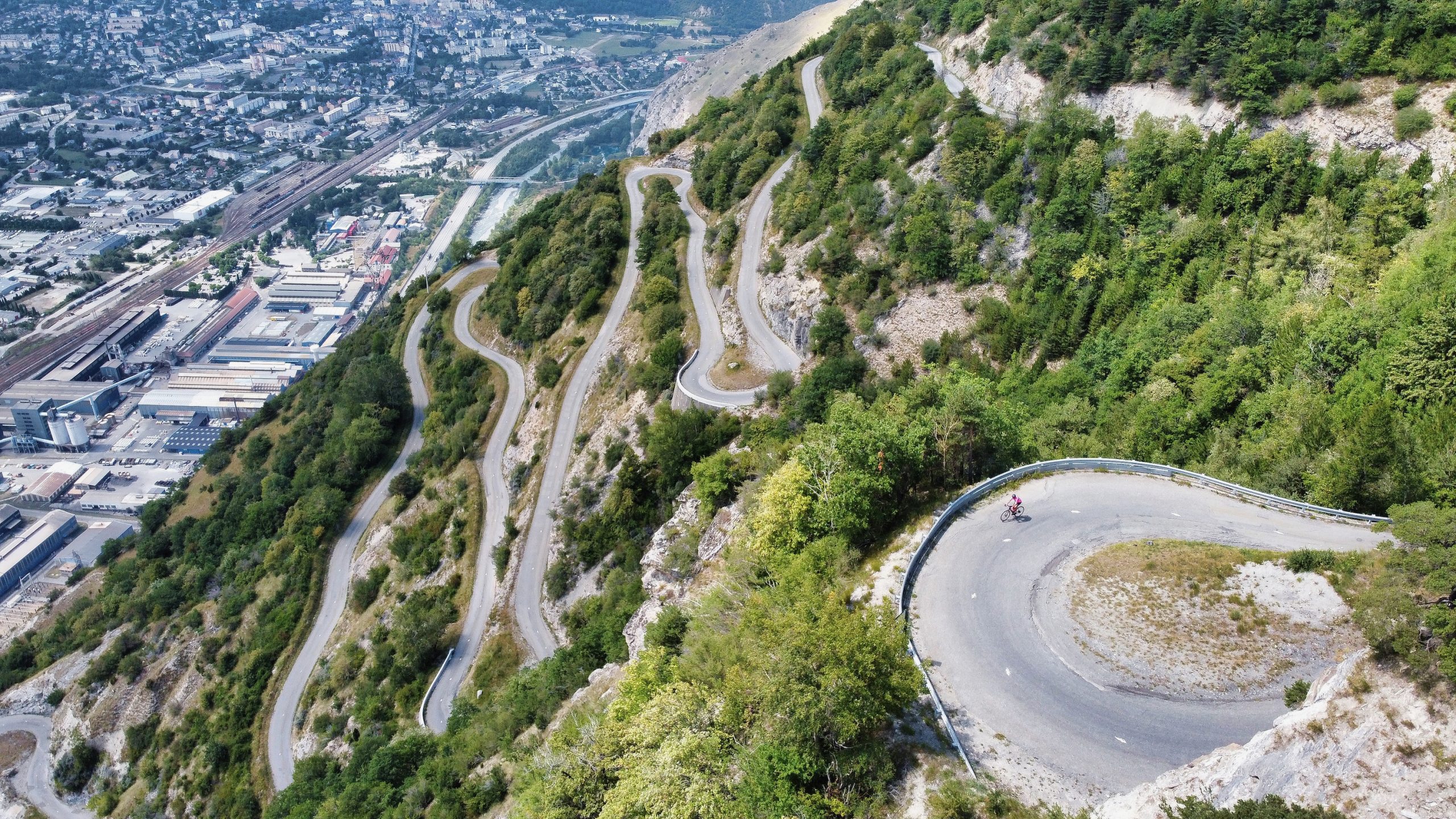 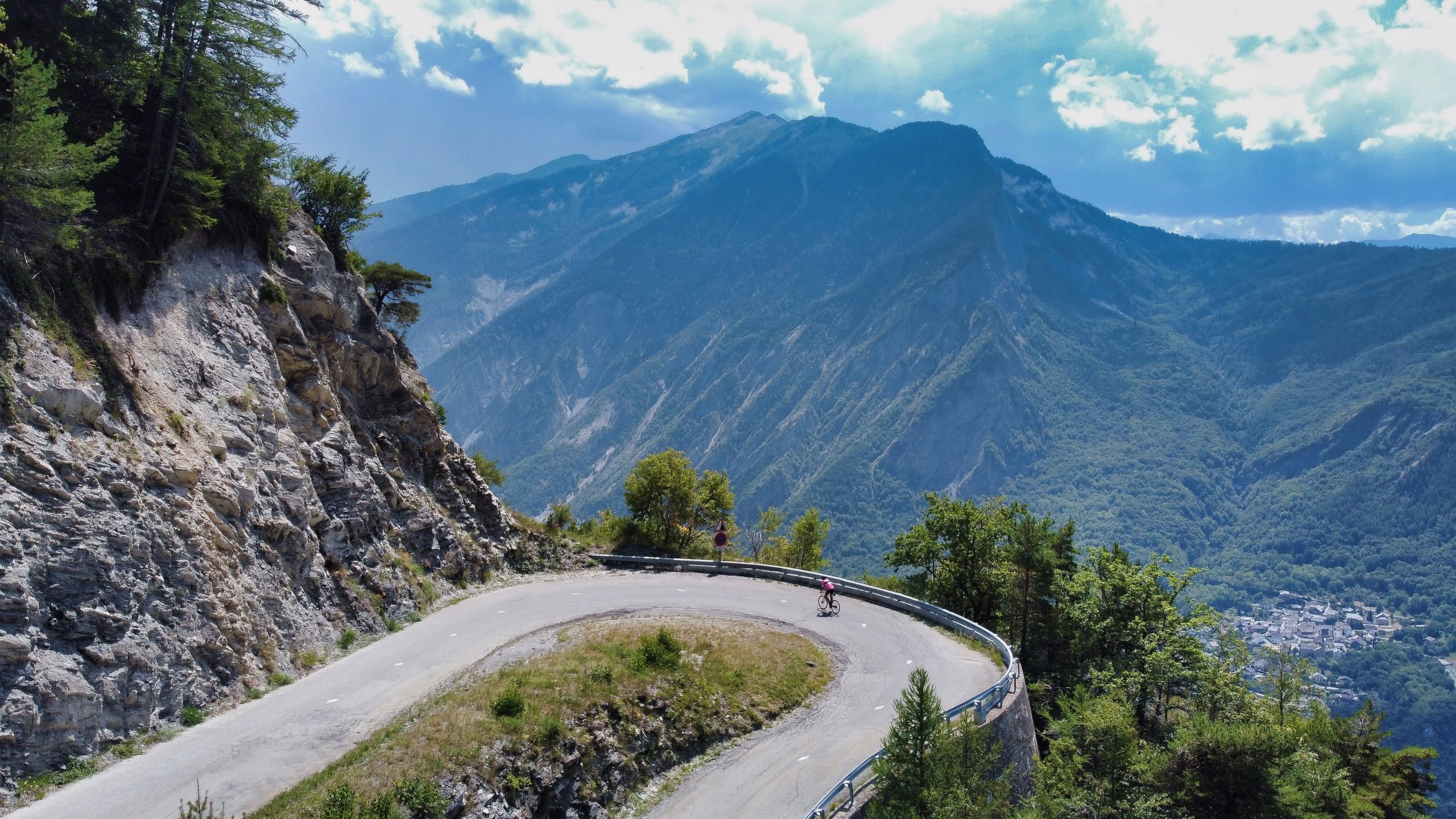 Note, the 10 kilometres along the valley floor is initially difficult. But despite briefly feeling like I was on an autoroute, I think I chose the quietest direct option. It doesn’t take long and quickly gets better.

In summary: This is a scenic, quiet loop. It will never be well known given its far higher and spectacular neighbours that I mentioned above. But, definitely worth a visit.

Here’s a 3D video of the route. Note, it’s tough to see Les Lacets at the start due to the angle of the video. Sorry.