Trending
You are at:Home»Favorites»Col du Galibier via the Old “Road”

Woohoo, this is a great route! It has three distinct sections, all of which require thicker tires:

The highlight was the ascent of Col du Galibier on the remains of the original south side road. It was replaced in 1938 by the less steeper modern road – they take completely different lines. But the entire route is excellent. 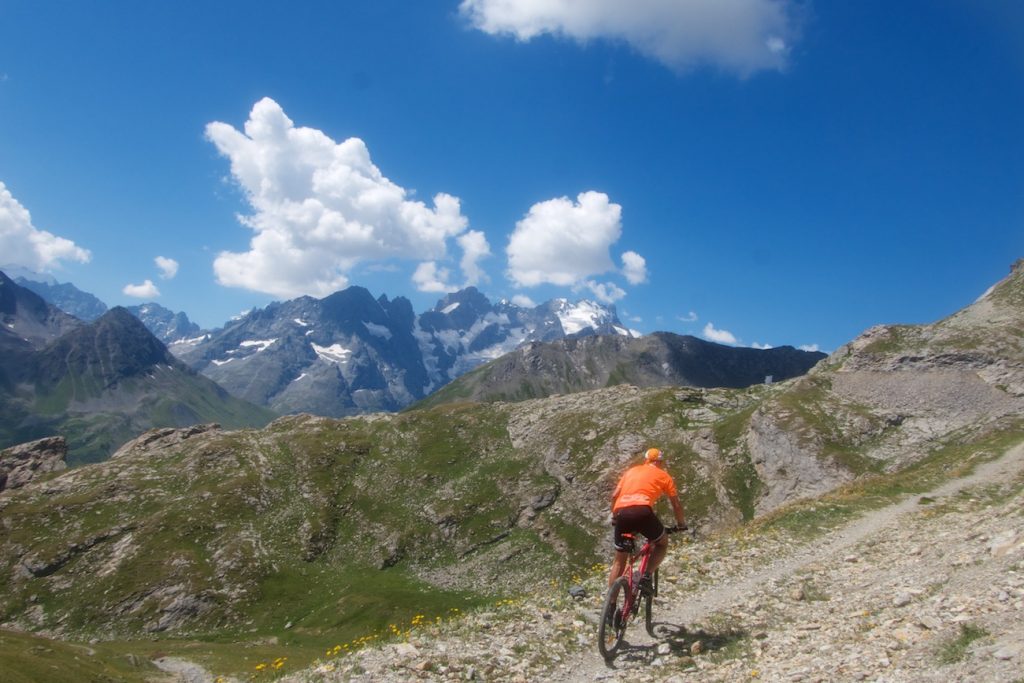 My goal was to avoid the somewhat busy/fast main road that road cyclists are forced to take. My mapped 27 kilometres stretch worked better than I hoped, completely avoiding the main road using a series of trails and small paved/unpaved roads. Even better, most of the route, especially as I progressed, was beautiful. See details on the map at bottom. 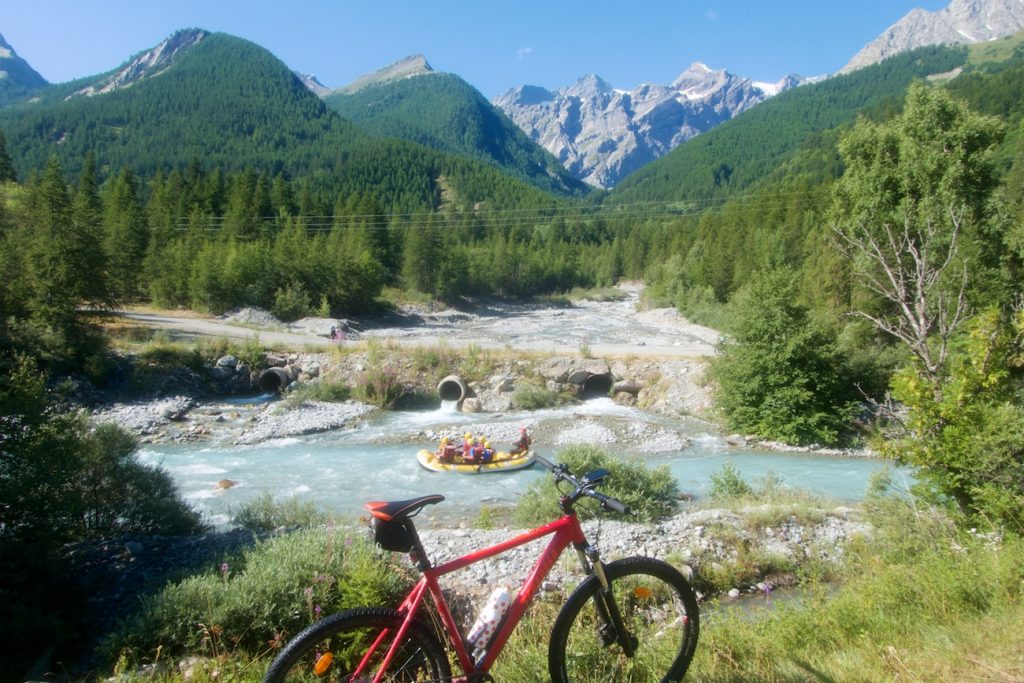 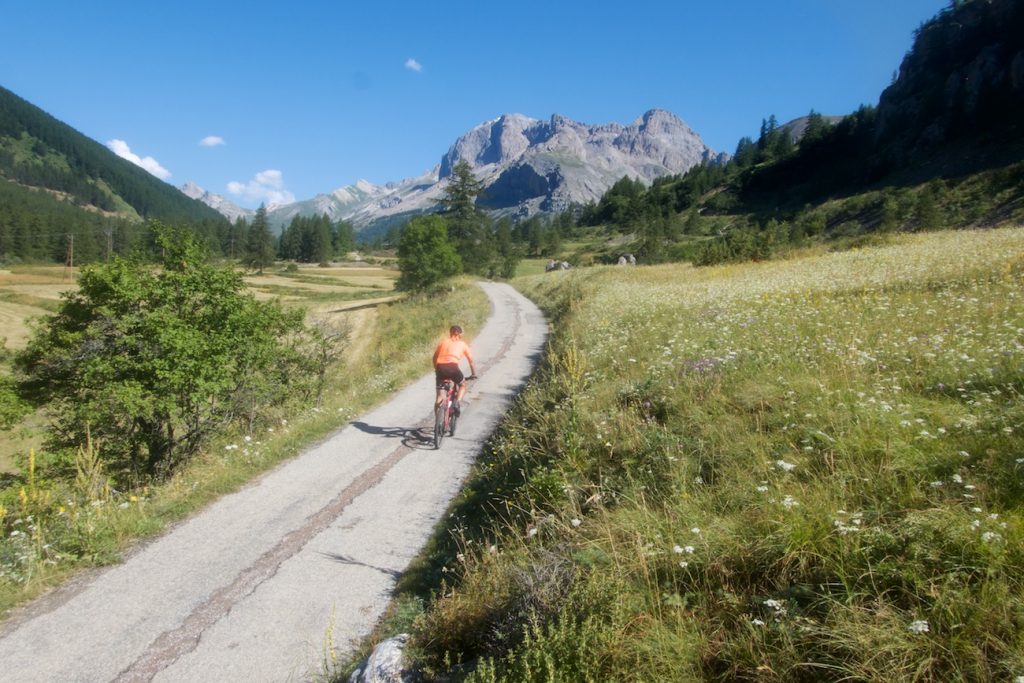 First built in the 1880’s, this was the only way up the south side until 1938. As best I can tell it was abandoned/closed in 1947. This means that between 1911 and 1938 the Tour de France would have climbed or descended this road over twenty times. It is far to the east of the modern road and except near the beginning the two routes don’t intersect until the top near the Desgranges monument at the entrance of the tunnel (2556 metres). 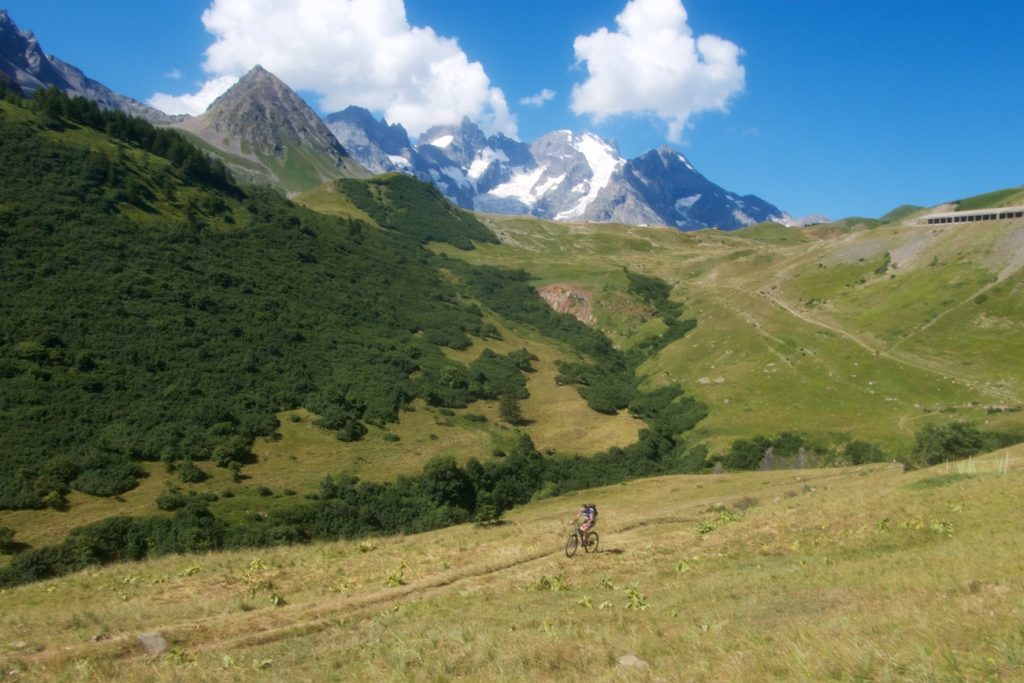 It’s easy to find the old road: it’s intersects the main road roughly two kilometres below Col du Lautaret (just before the paravalanche tunnels). But the climb begins roughly a kilometre below … probably the steepest stretch. The entire ascent is shorter and thus steeper than the modern road at roughly 10% average versus closer to 7% for the equivalent paved ascent.

Regardless, it’s super fun and far quieter mid-summer than the only option available to road cyclists. The views are dominated by the glaciers atop some of the bigger peaks of the Massif des Écrins on the far side of Lautaret. 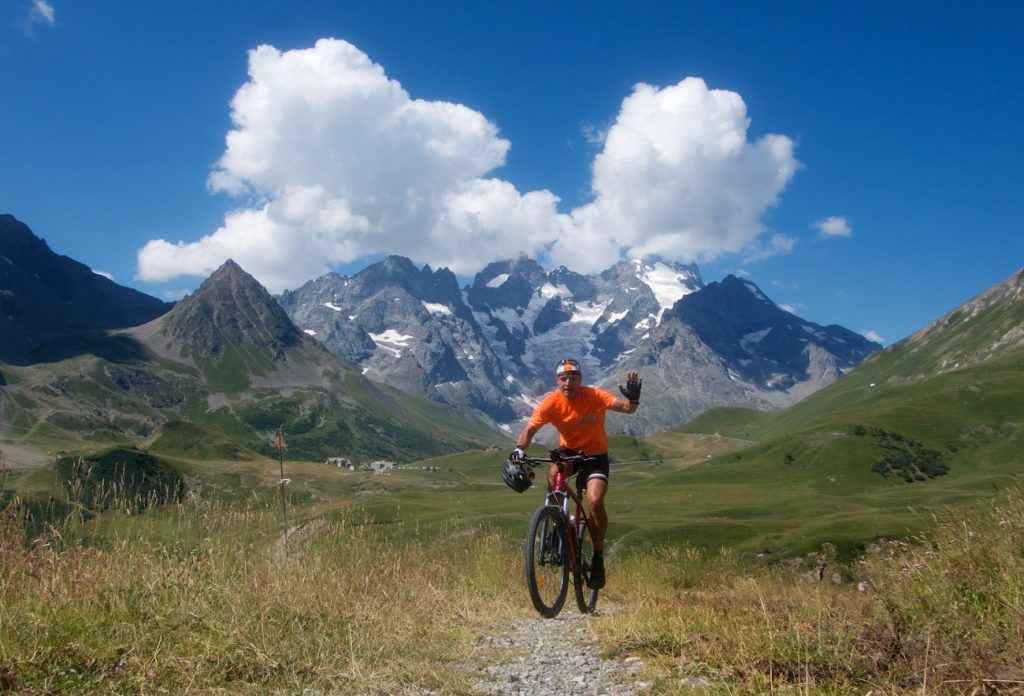 On my map the route is labeled as a downhill mountain bike trail and I would see a dozen or so descending. But apart from that and a couple of old farm buildings, it was deserted. 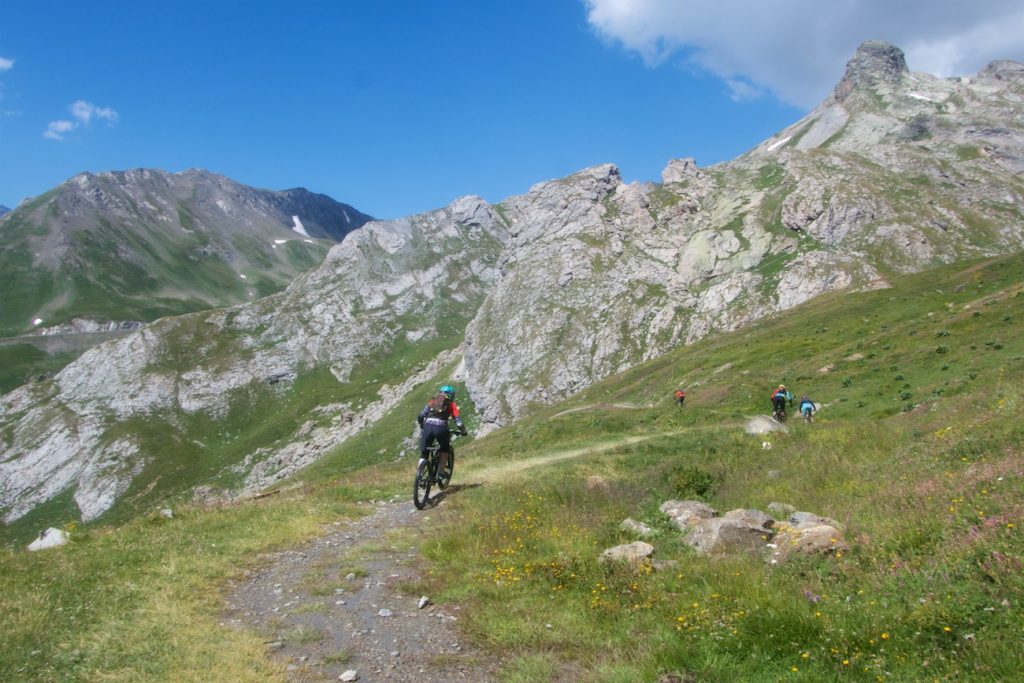 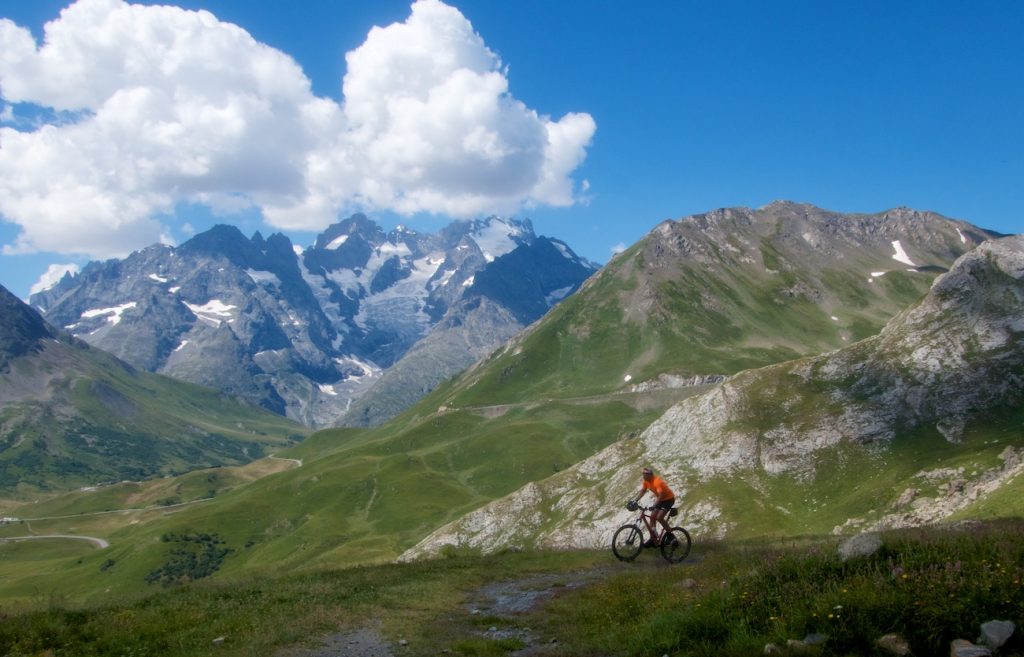 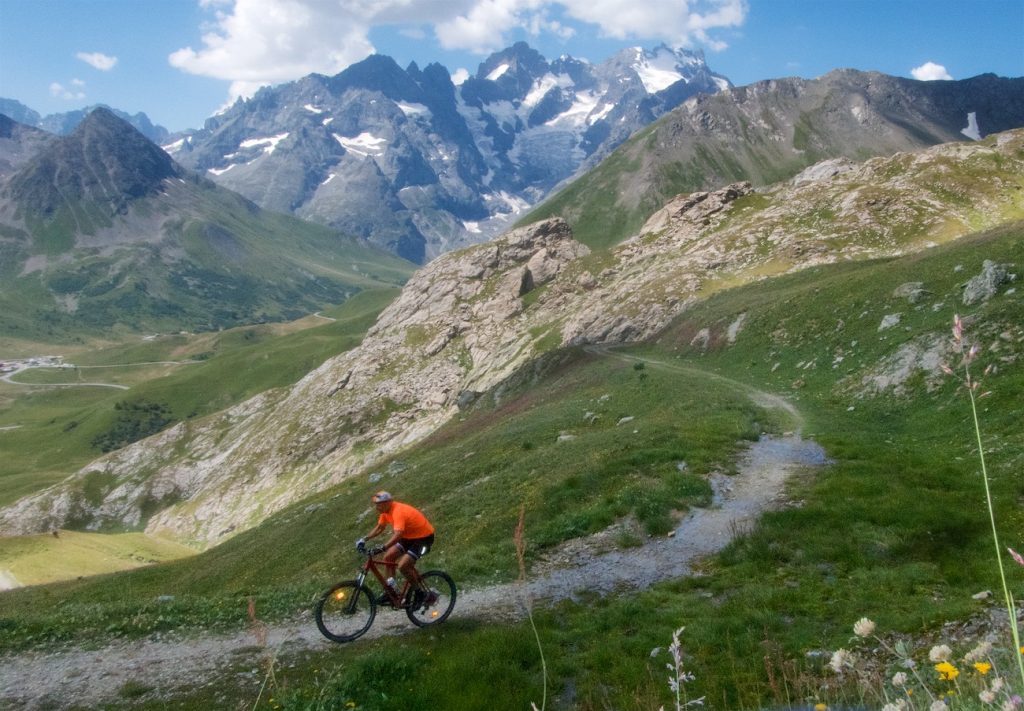 It was slow going for me but I was grateful for a bench half way up: 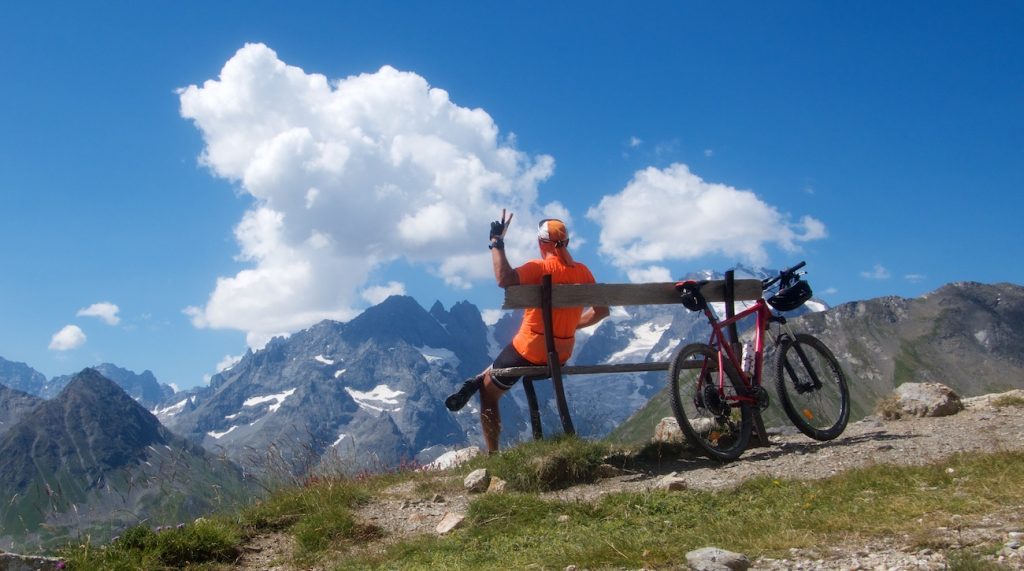 As I approached the top, I crossed the main road: 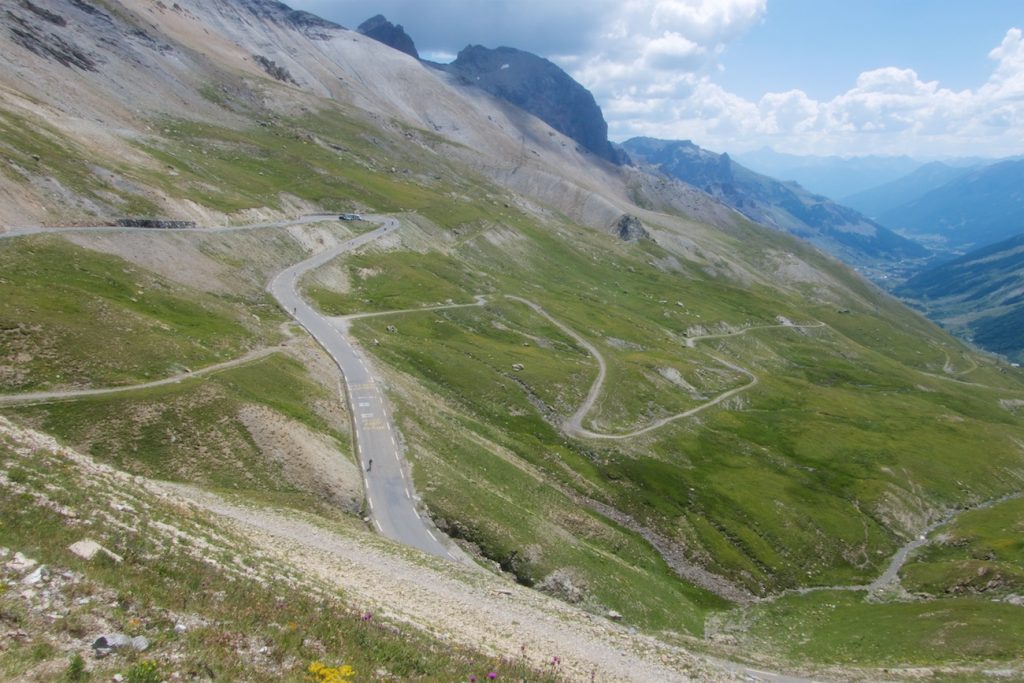 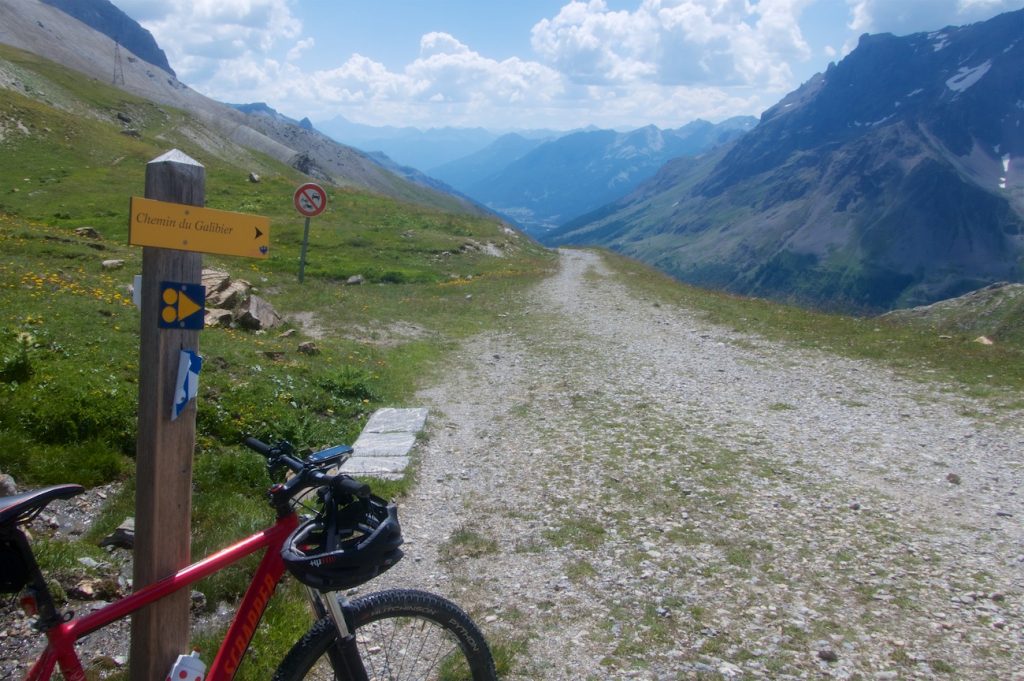 Looking down old road at intersection with paved road

Just before the tunnel the old road ends and I climbed the final kilometre on the main road. I’ve written about Col du Galibier many times so I didn’t take many photos here. But the summit and both sides above the tunnel are spectacular.

See here for a “complete look” at Col du Galibier … although it was incomplete as it excluded this old road! But there are details of the paved options, some history, etc. 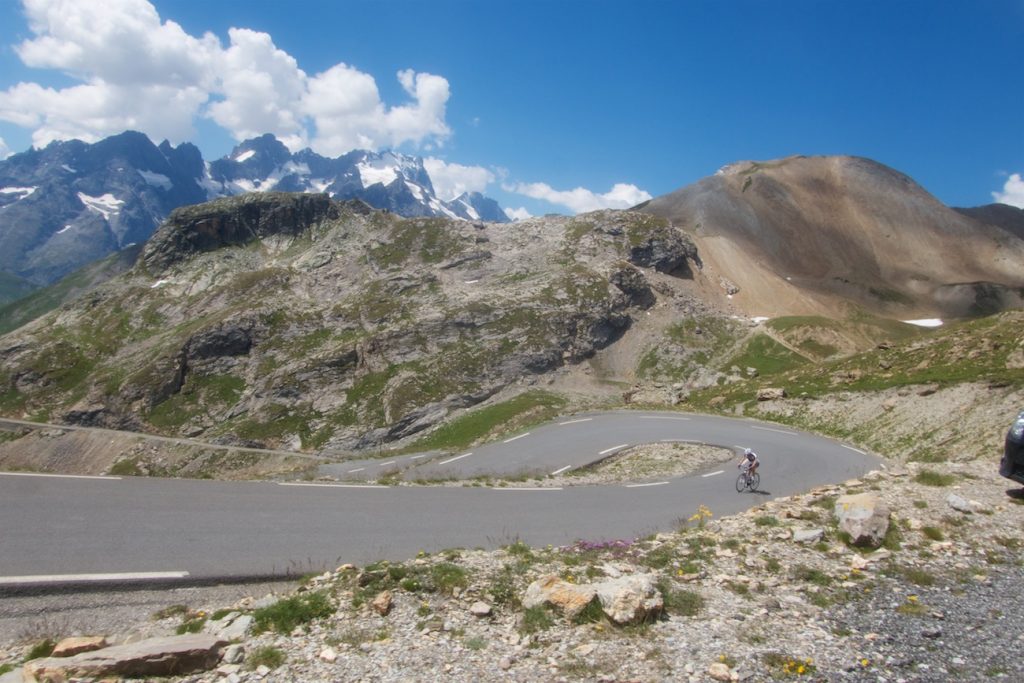 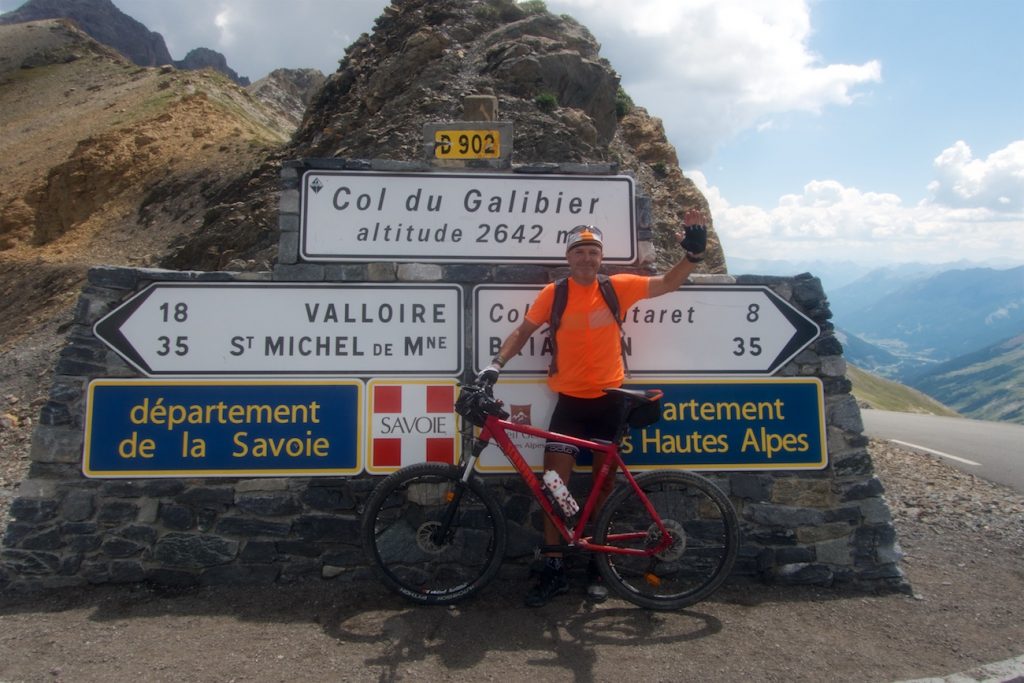 3. A secret valley descent of north side of Galibier

I still had one last trick up my sleeve. Descending the north side, three kilometres down is actually a geograhic col: Collet du Plan Nicolas (2406 mettres). There is a small gap here, and I jumped over the far side into a “secret” valley. Initially, it’s actually an old road that leads to a farm, the only sign of civilisation. But the road is atrocious in places, and so steep that I walked one stretch in fear of not being able to stop. 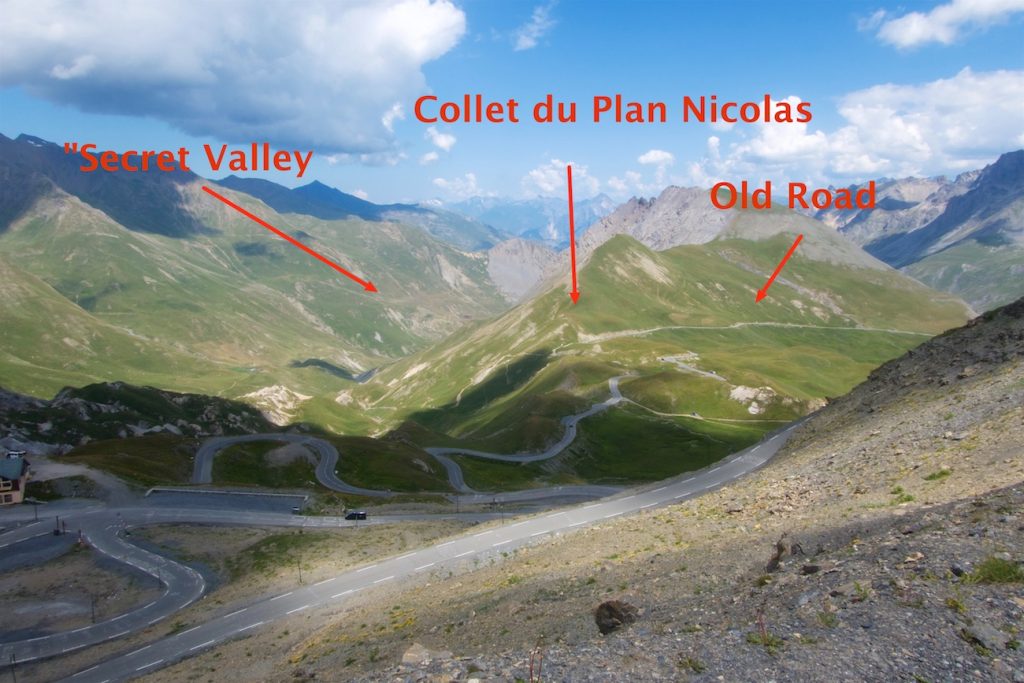 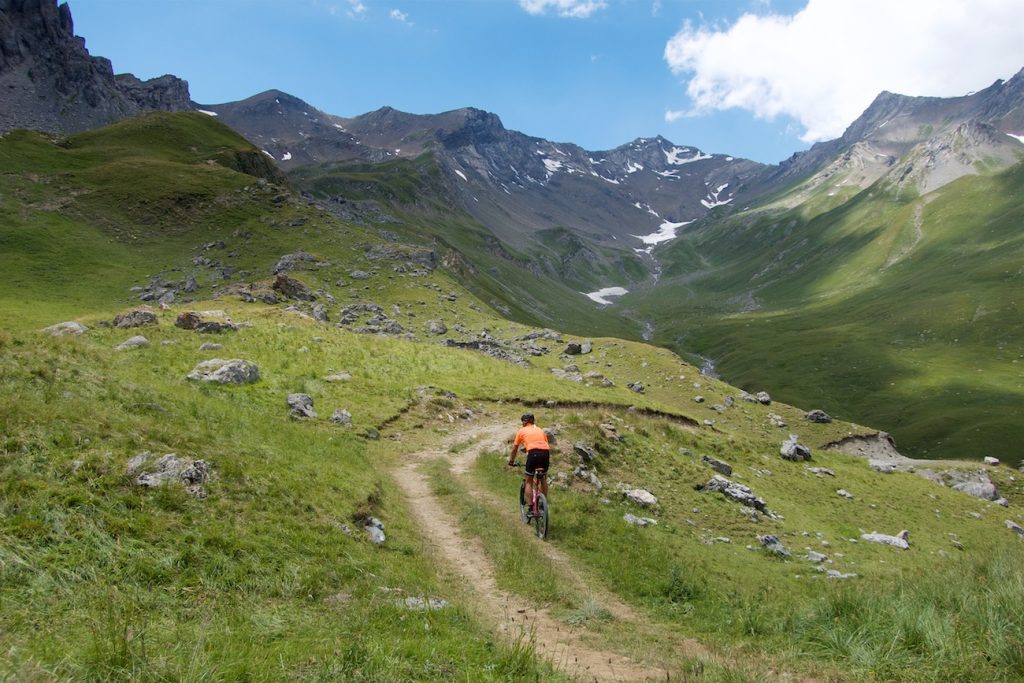 Note, the old road soon ends, and I passed the farm on a hiking trail. From here on things occasionally get far more difficult and technical. And at one point it’s very steep, even the best cyclist would walk here. I definitely would not recommend climbing through this valley as much would be unrideable. But going down? Very fun and usually rideable. 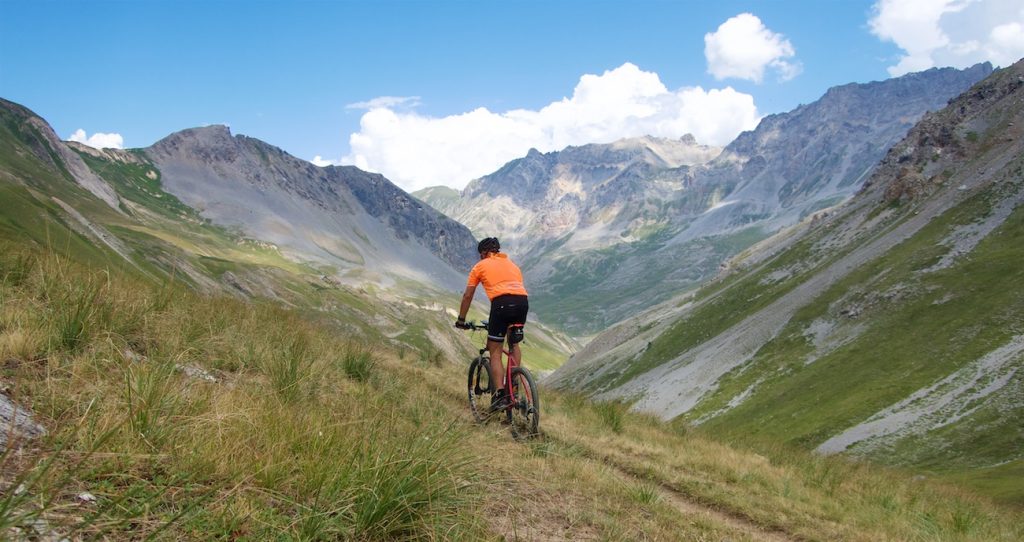 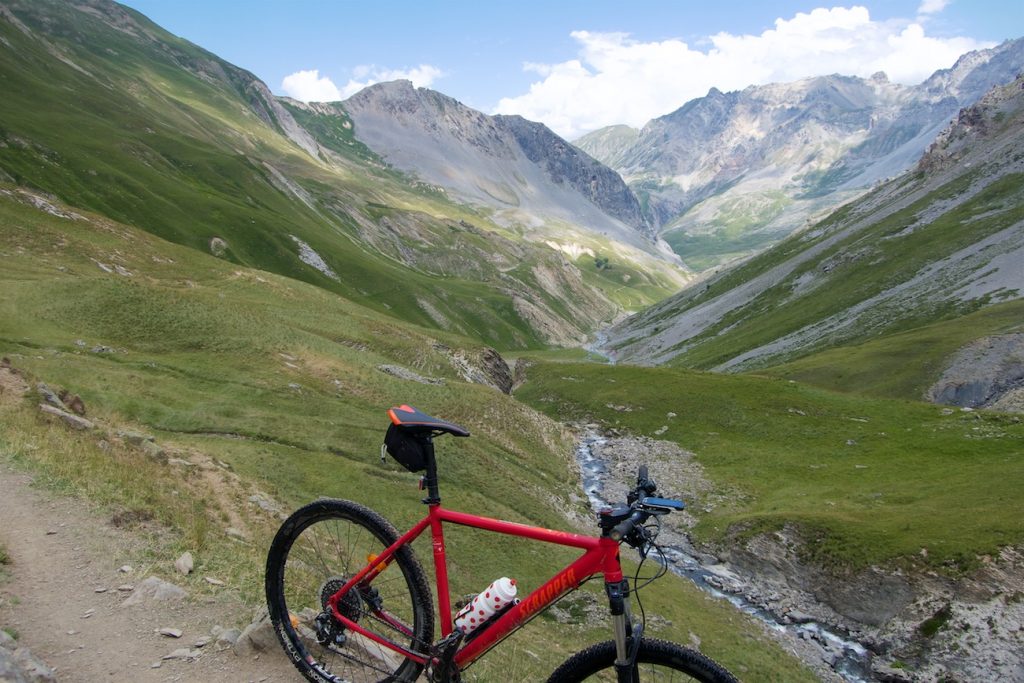 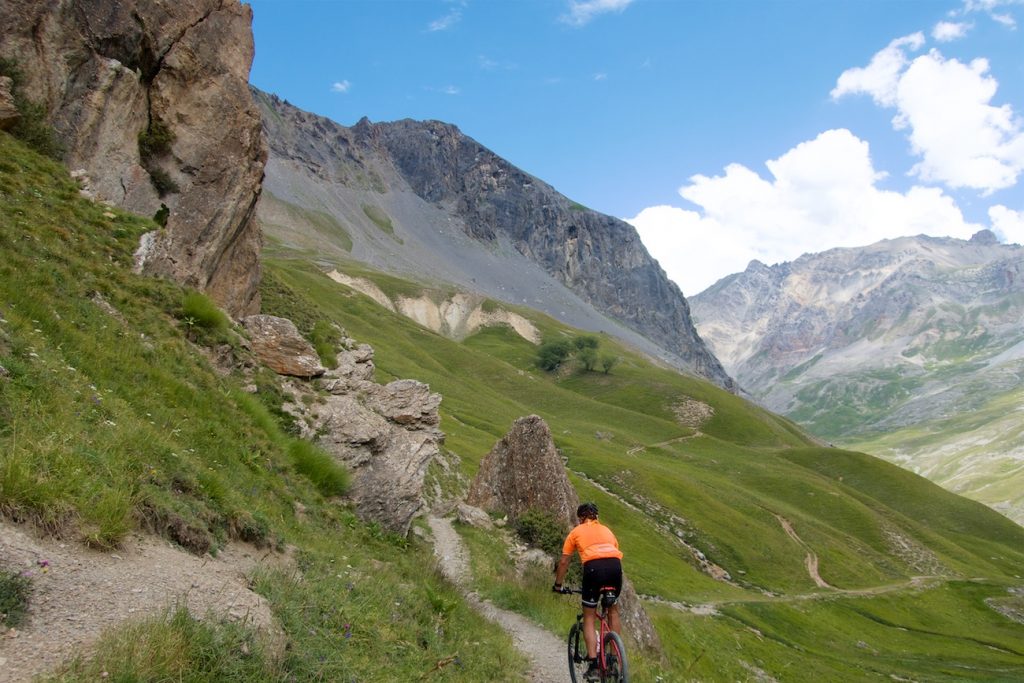 Eventually the trail reaches a rough road that soon reconnects with the main road at 1750 metres perhaps 12 kilometres below the Galibier summit. I’d eyed this valley so many times while road-biking Galibier, it was satisfying to now know what lay behind the mountain here.

Finally, I only had a few paved kilometres back to Valloire (there are some mountain bike trails parallel to the main road though) and the end of my three day excursion. This three day trip worked far better than I could have hoped. Each day was interesting, challenging and beautiful. Highly recommended. The map at the very bottom includes the entire three day route, with the 14 cols labeled. 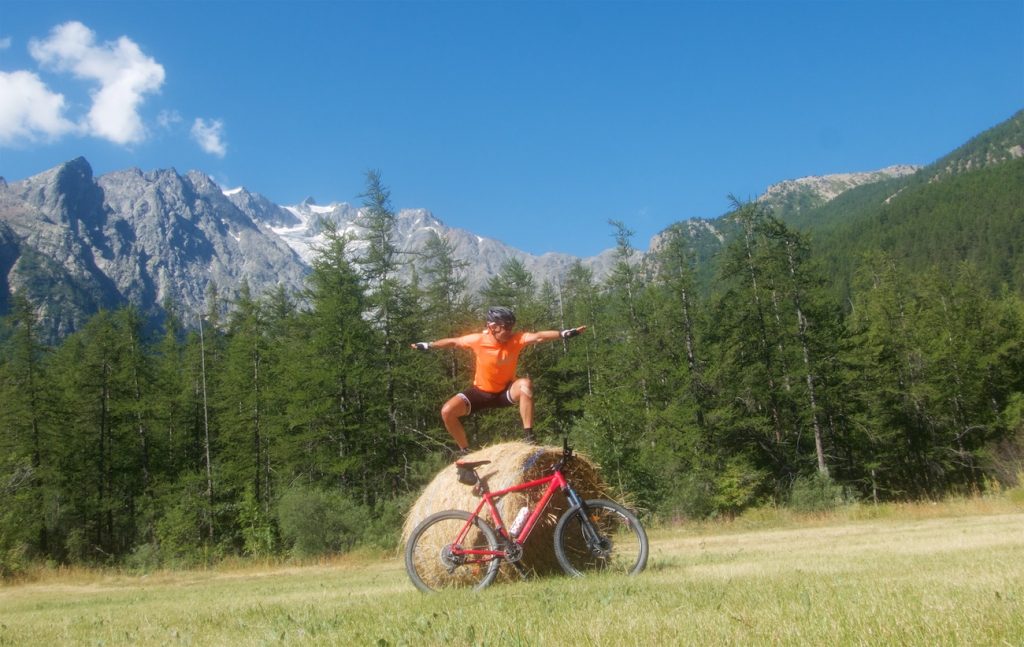