Trivia: How many Saint Bernard’s can you find in the above photos (answer: two).

The 2007 Tour de France climbed part of this Col, turning down at about 1,650 metres, this was the second last climb on the stage that ended in Tignes.

Col du Petit Saint Bernard is a small but big climb. Small because it is rarely steep averaging less than 5 percent, but big as it includes almost 1400 metres of vertical climb and finishes at almost 2,200 metres (for those good at math, yes that means it is long – about 30 kms).

Lots of history here. The Col is believed to have been used by Hannibal when he crossed the Alps to invade ancient Rome. Saint Bernard wandered up here fighting paganism and founded a Hospice in the middle ages. There used to be a Roman Temple dedicated to Jupiter at the top – this space is now filled with a giant statue of Saint Bernard. There is also the remains of a 72 metre stone circle dating from the Iron Age.

To add a quiet, and steeper stretch in the middle of the climb, at about 6kms take the D84 towards Montvalezan. This shortens the route by almost 4 kms and adds 4 quite steep kilometres. The D84 rejoins the N90 for the last 10 or so kms. Highly recommended

The top is the Italian/French border. Mont Blanc in distance: 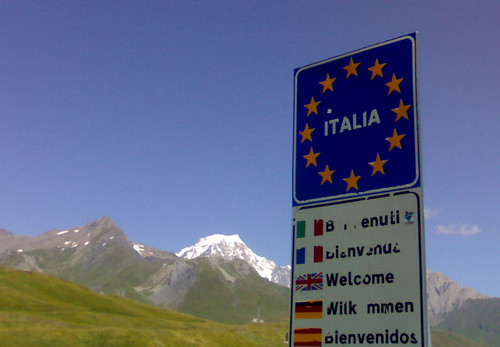