The Grand Prix Von Bern is the biggest running event in the german part of Switzerland with over 20,000 participants.

It’s tag line is “The most beautiful 10 miles in the world.” And it’s a great course weaving through the UNESCO World Heritage city of Bern – the Capital of Switzerland.

Below (Doreen in Green and Toni in Orange) run through the beautiful old town: 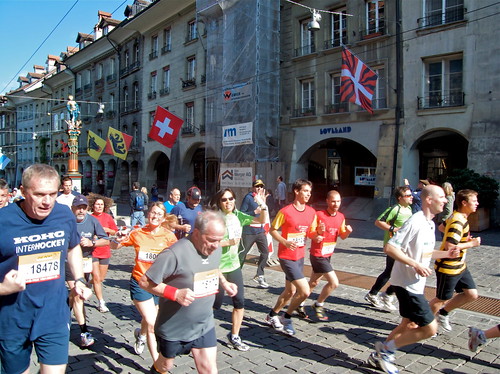 I was only there to support and to “try” and photograph Doreen, Martin, Toni, and Ian.

Congratulations to all of them for their impressive performances.

We all marveled at Martin’s time, the fastest of the group. Ian celebrated his Birthday by running so fast, I only managed one photo of him, and that was after he had already passed me. For Toni this was her very successful comeback race after a nasty ski accident. And my brave wife Doreen knocked about 10 minutes from her 2008 time.

So to celebrate everyone’s success we had a HUGE Chinese feast in the Berne old town.