Known locally as the European Grand Canyon, the Gorges de l’Ardèche is a 30 kilometre-long canyon between Vallon-Pont-d’Arc and Saint-Martin-d’Ardèche. It’s popular among climbers, hikers, canoe/kayakers/rafters, and spelunkers. Among the many caves is evidence of man from 300,000 years ago. Several huge caves are open to tourists (we enjoyed les grottes de Saint-Martin-d’Ardèche over a decade ago while cyclo-touring through). 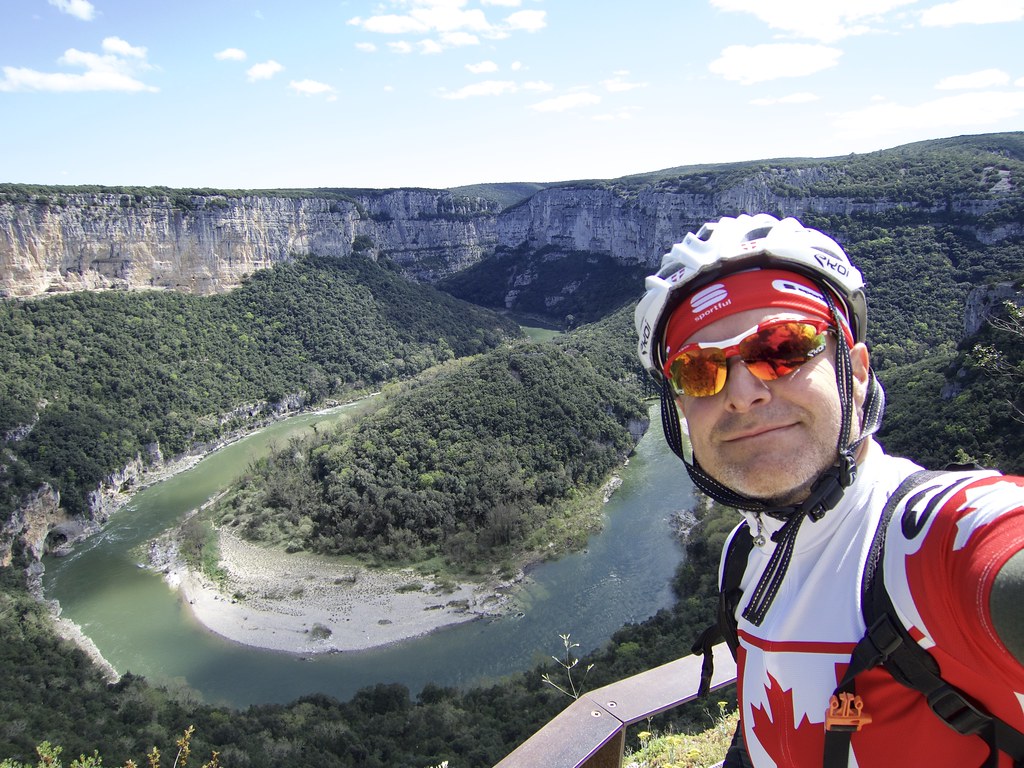 The region was generally inaccessible until the 1960’s, when an astonishing road was built along the south side of the gorge. A dream road for cyclists.

The first map below has three suggested routes in the region. The green route which I just cycled, passes through the Gorges de l’Ardèche istelf. The other two I have yet to ride, but were featured in the April 2013 issuee of Le Cycle Magazine. I’ll describe all three below.

This is basically a loop around the entire Gorges. The first half, to the south, never gets near the river. If this early stretch is unspectacular, it’s very quiet – good cycling. The villages are few and far between, but the wine village of Aven-Orgnac is a good place for a snack, and also has its own prehistoric cave. Further along, Labastide-de-Virac is a superb little walled village with a well preserved castle. I have a fairly large collection of col sign photos, but the two cols on this route are the lowest I’ve ever ridden (Col de la Forestière 363m; Col du Serre de Tourre 323m). But while this route is never high, don’t think it is easy. The road is rarely flat.

The Gorges de l’Ardèche will feature in stage 13 of the 2016 Tour de France. The stage will be worth watching for the helicopter shots alone.
But the highlight of this loop is without a doubt the Gorges de l’Ardèche itself, which starts just past Vallon-Pont-d’Arc. The road enters the gorges by passing through a few cool tunnels carved into the cliffs. Initially near water level, the vast majority of the route through is well above the river. Early on there are 2 steep kilometres, 9%-11%, that reach Col du Serre de Tourre, and then the road remains high in the cliffs. 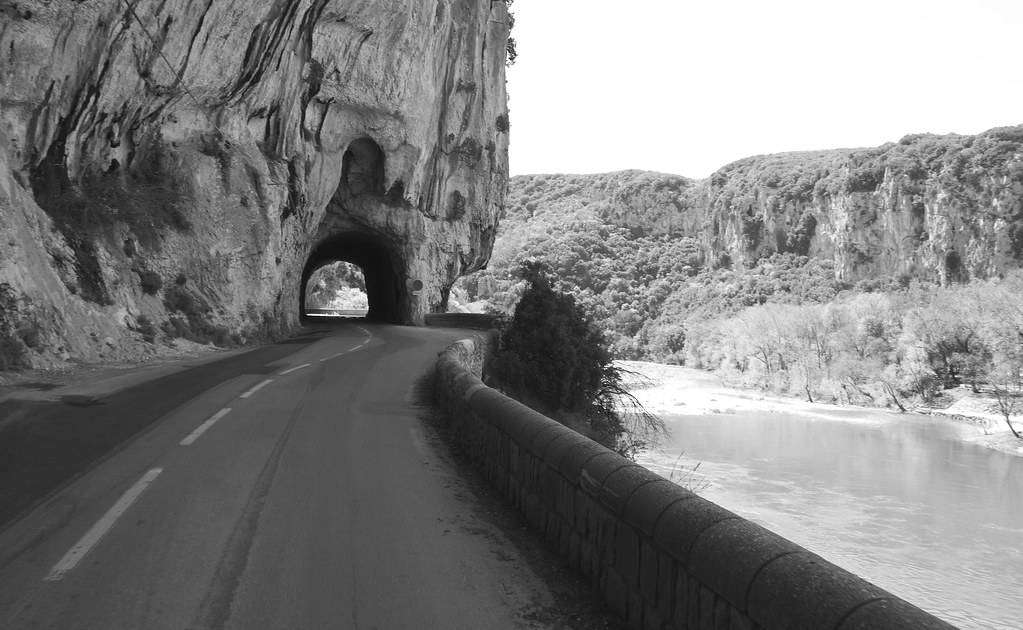 Below: The Pont d’Arc itself is just after the initial tunnels. 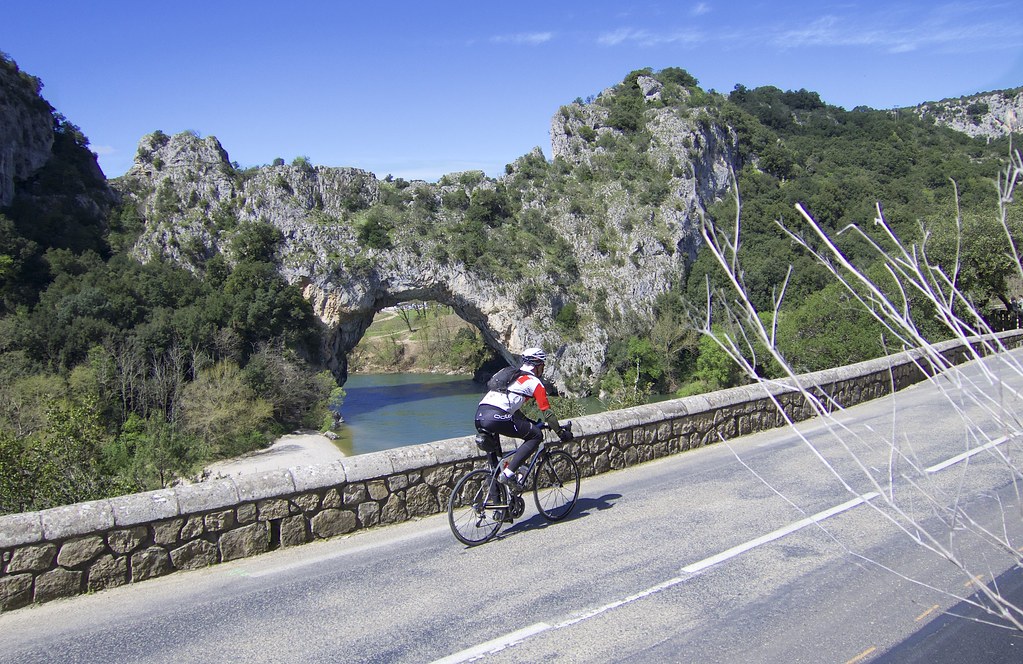 The sign entering speaks of 11 managed look-out spots. These are great. Basically, they have built steps to cliff galleries at all the best viewing spots. I stopped at most and enjoyed the breath-taking scenery. 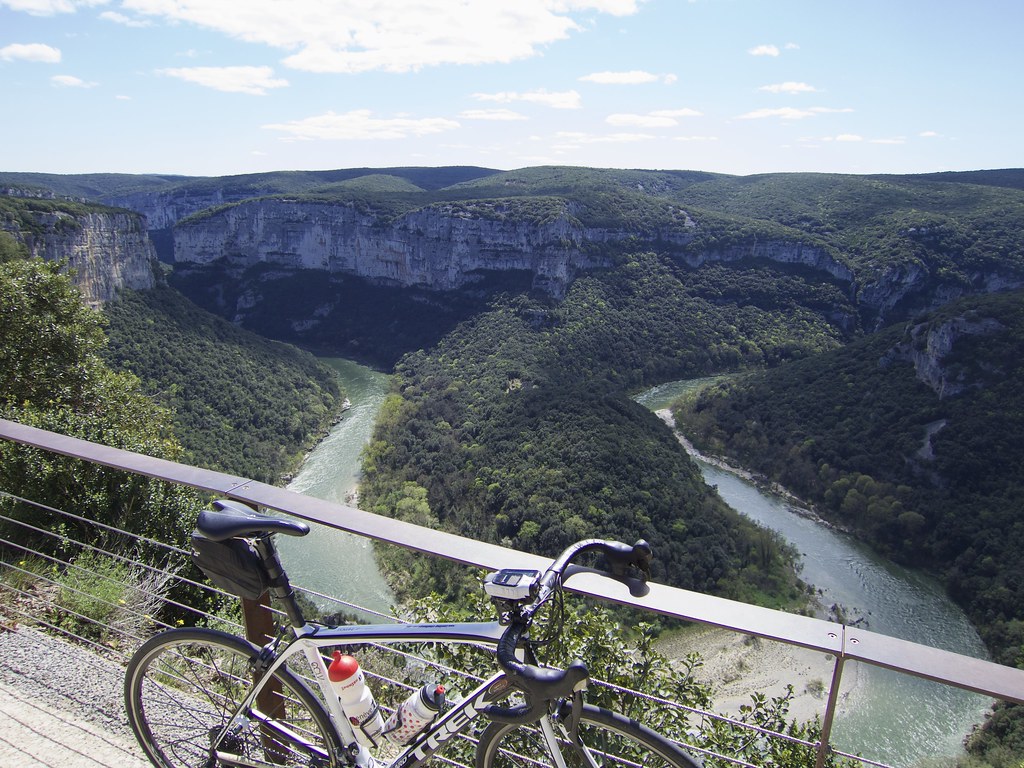 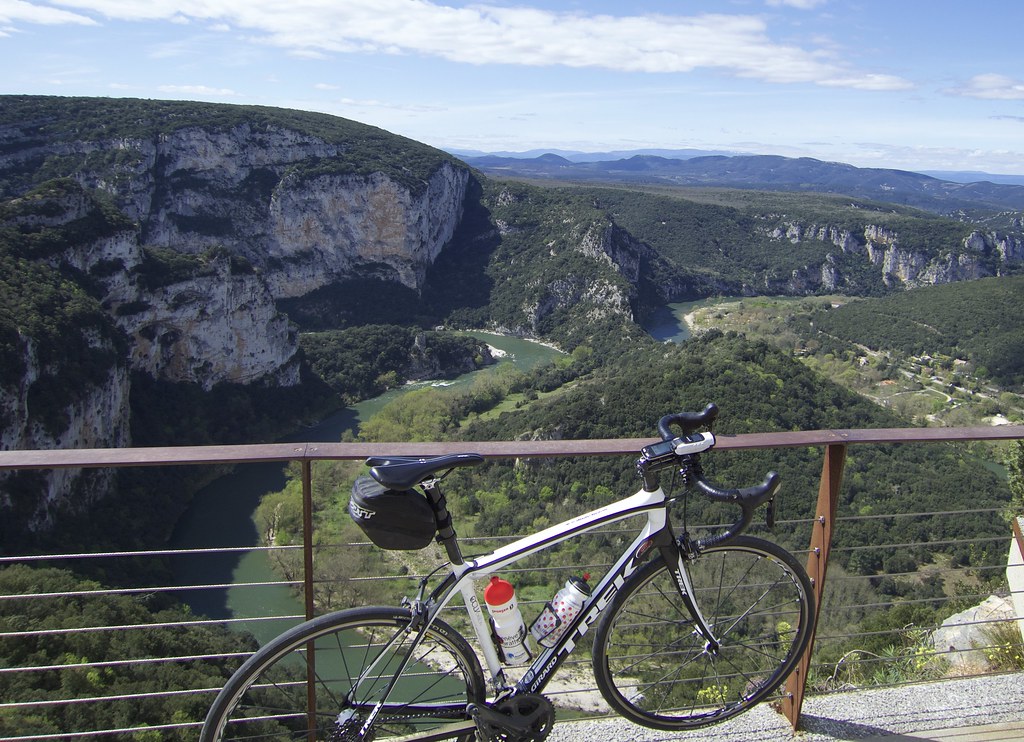 I scanned an old print I found from 2002 of my wife here – before we had a digital camera – old-school. 🙂 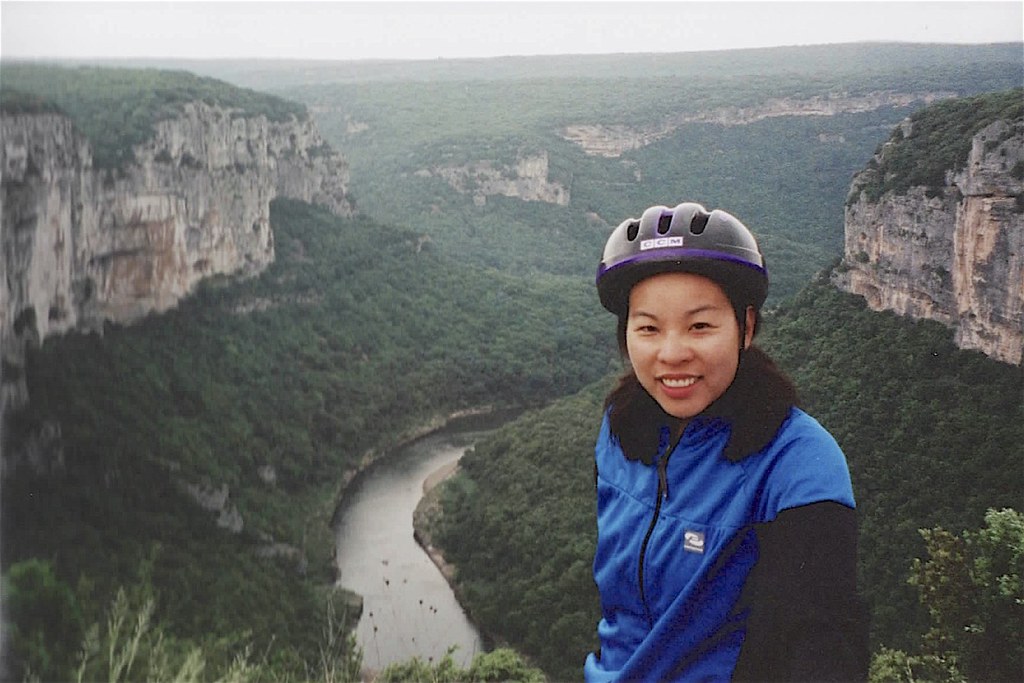 This ride is really as good as it gets. A simple route suggestion might be to just ride through the 30 km gorges and then just double back.

Map of loop with profile. Click on map name for gpx file.

Again, these next two loops were recommended by Le Cycle Magazine. Blue route on top map.