Trending
You are at:Home»Favorites»Gorges du Verdon and Route des Crêtes

The words “gorge” and “gorgeous” both apparently derive from the same old French word “gorgias” – fine/elegant, or a fancy necklace. In any case, without a doubt some of the most gorgeous cycling in France is through its many gorges. And the most impressive must be Les Gorges du Verdon (the French use the plural: gorges).

This route is two loops: The bigger loop rides around both sides of the gorge, while the interior loop, climbs the Route des Crêtes, basically a mountain towering over the gorge. It’s tough, with 2500 metres of climb and 6 cols – all labeled on the map.

I started in the medieval village of Trigance. I was staying at the restored, thousand year old Château de Trigance – highly recommended. The first 45 kilometres follow the rive gauche (left bank). Most of the route is high above the river, with the emerald coloured water far below. The views are astonishing, continuously.

Face in the direction that any river is flowing. The left bank is on your left. 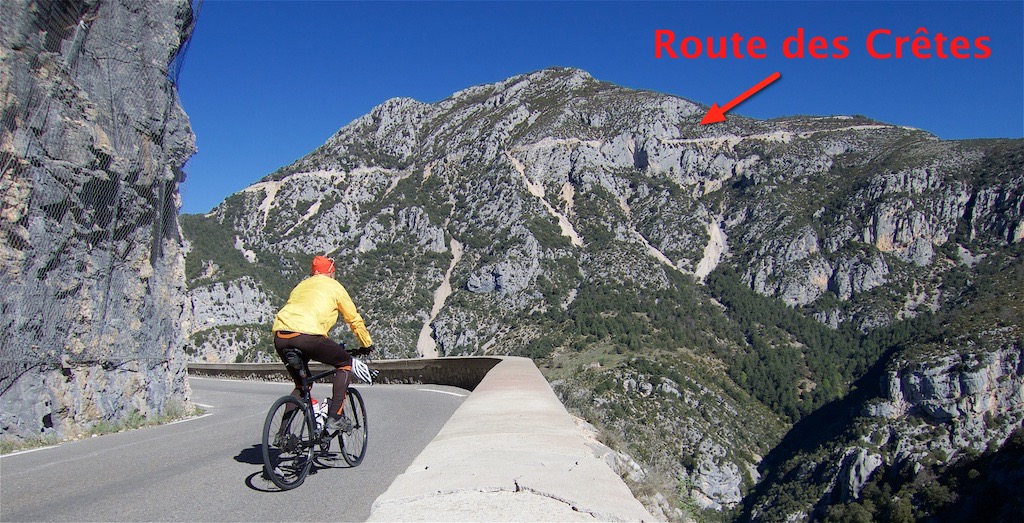 Route des Crêtes on far side of the gorge

Inside the Tunnels de Fayet

The road then goes up and up, eventually reaching the Col de Vaumale at 1201 metres. This stretch is appropriately labeled Corniche Sublime on my IGN maps. The photo below was taken much later, but gives you an idea at how high above the gorge the road is. 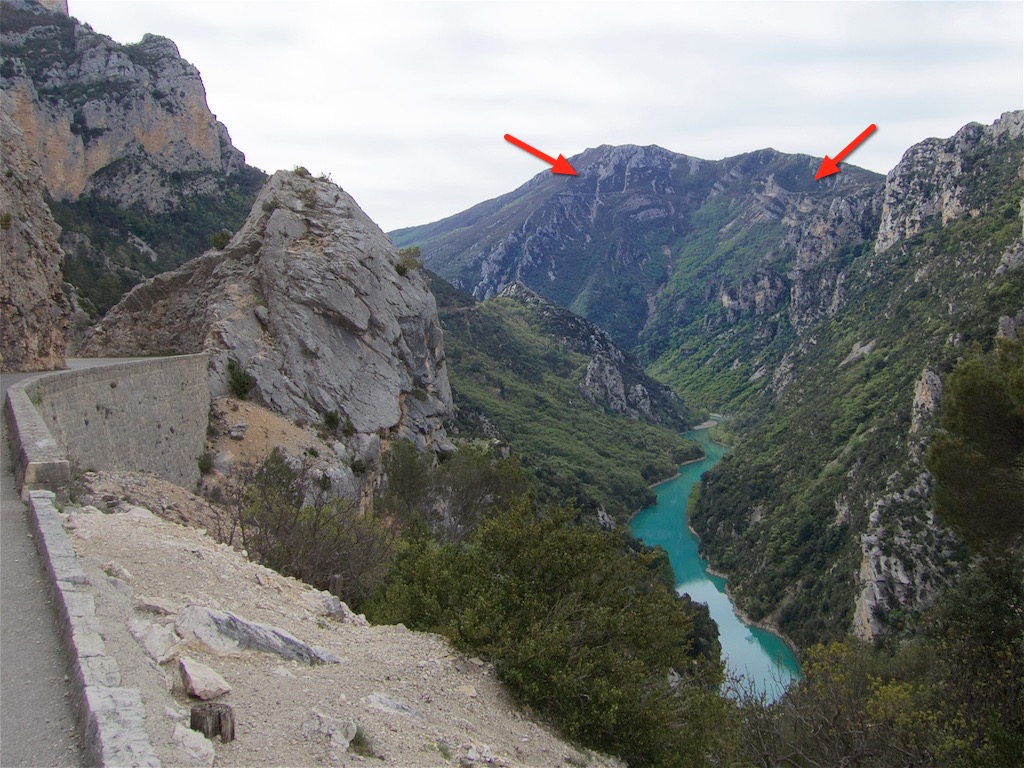 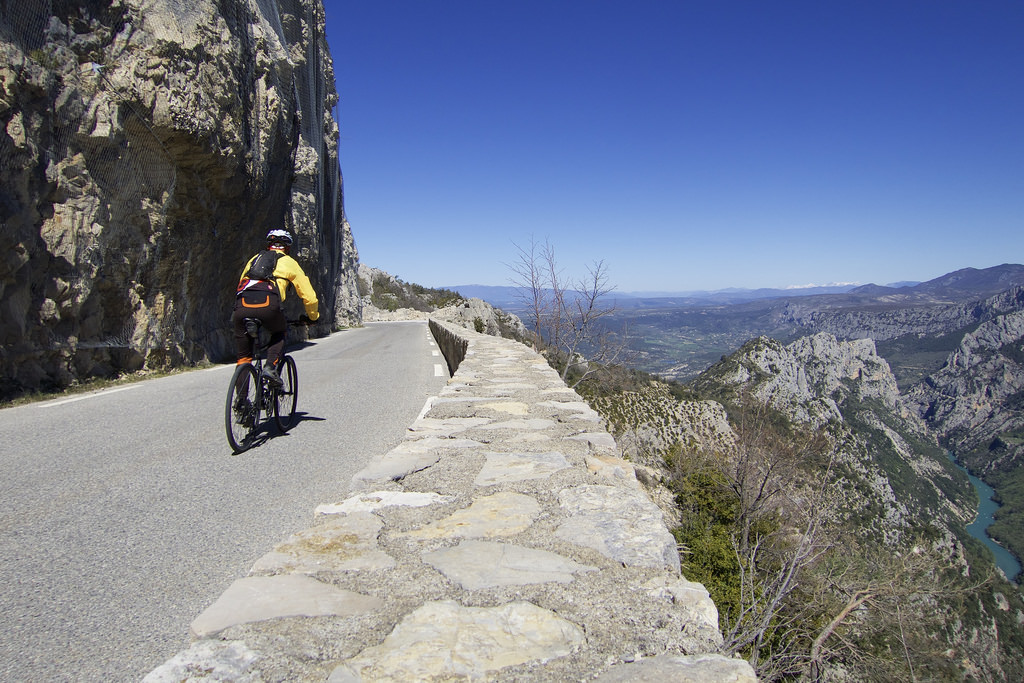 The river far below 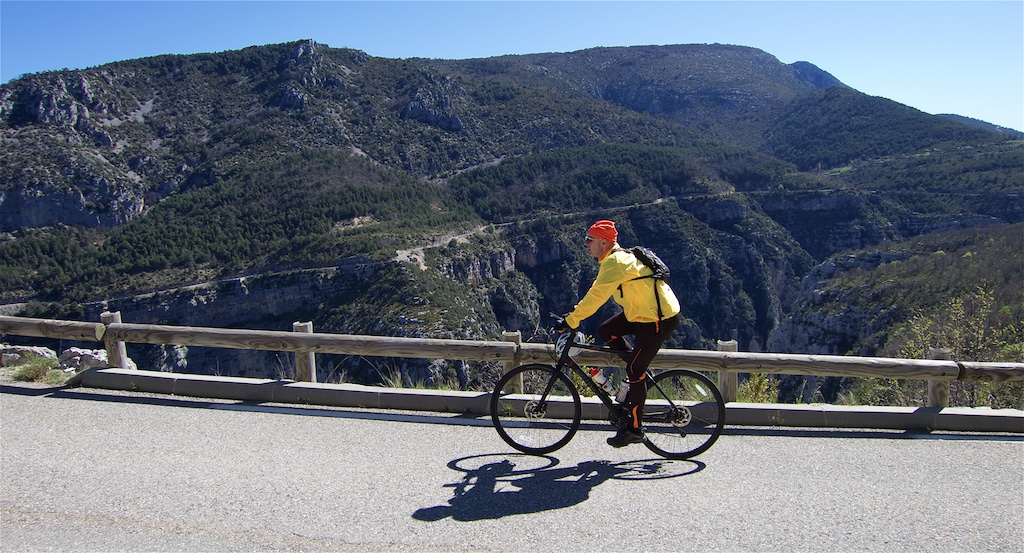 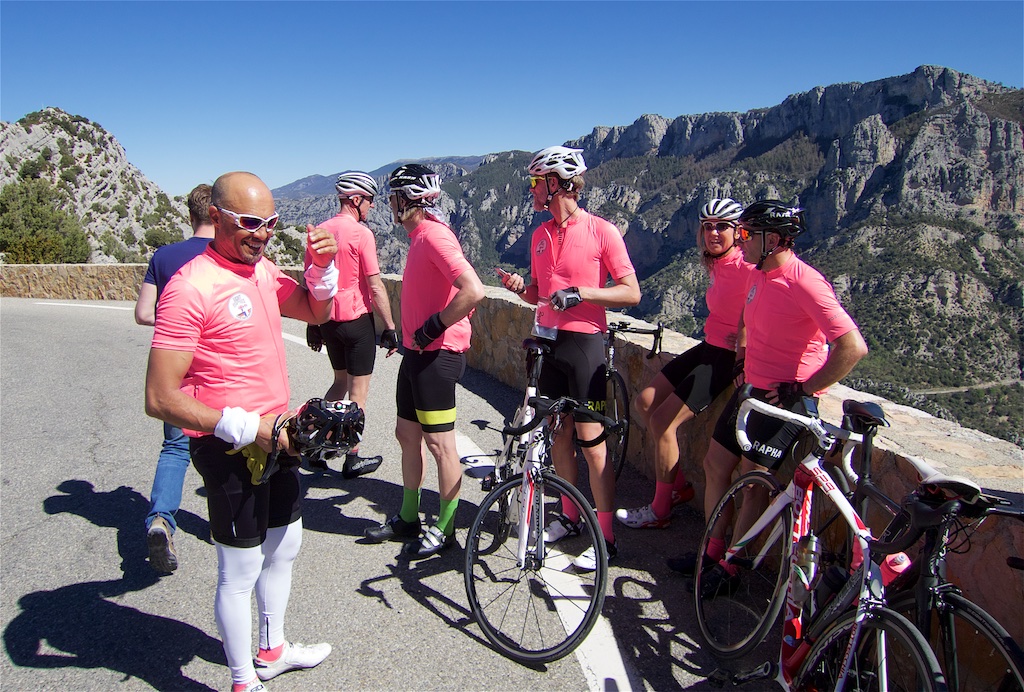 The road next descends rapidly towards the artificial Lac de Ste Croix – created by damming the Verdon river here (I’ll blog a loop around this lake tomorrow). 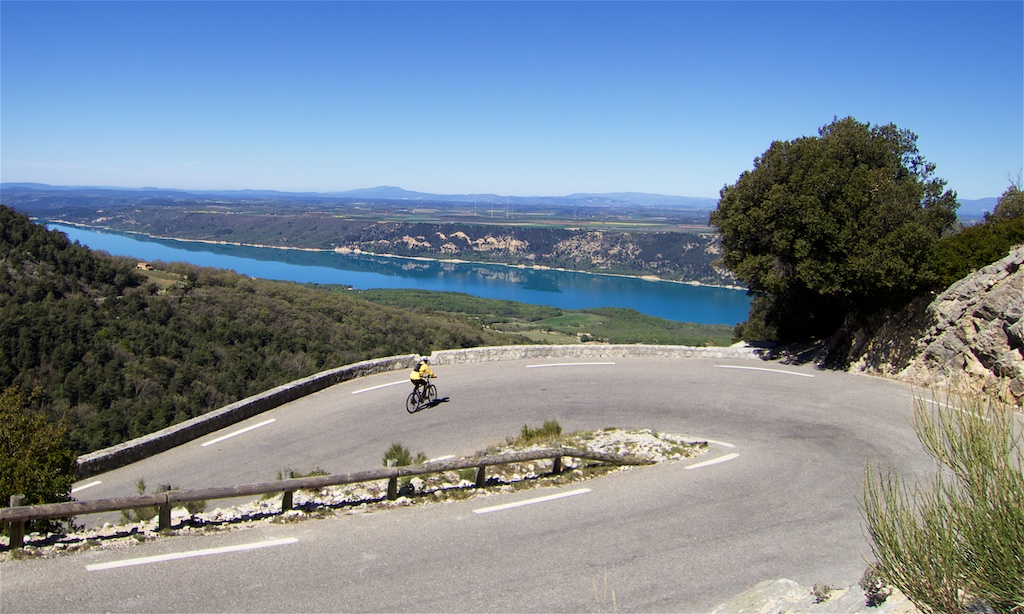 Lac de Ste Croix – OK, I was descending here but stopped for photo.

The route goes all the way down to the lake, crosses the Verdon river at its exit from the gorge. From now on we’ll be on the rive droit (right bank). 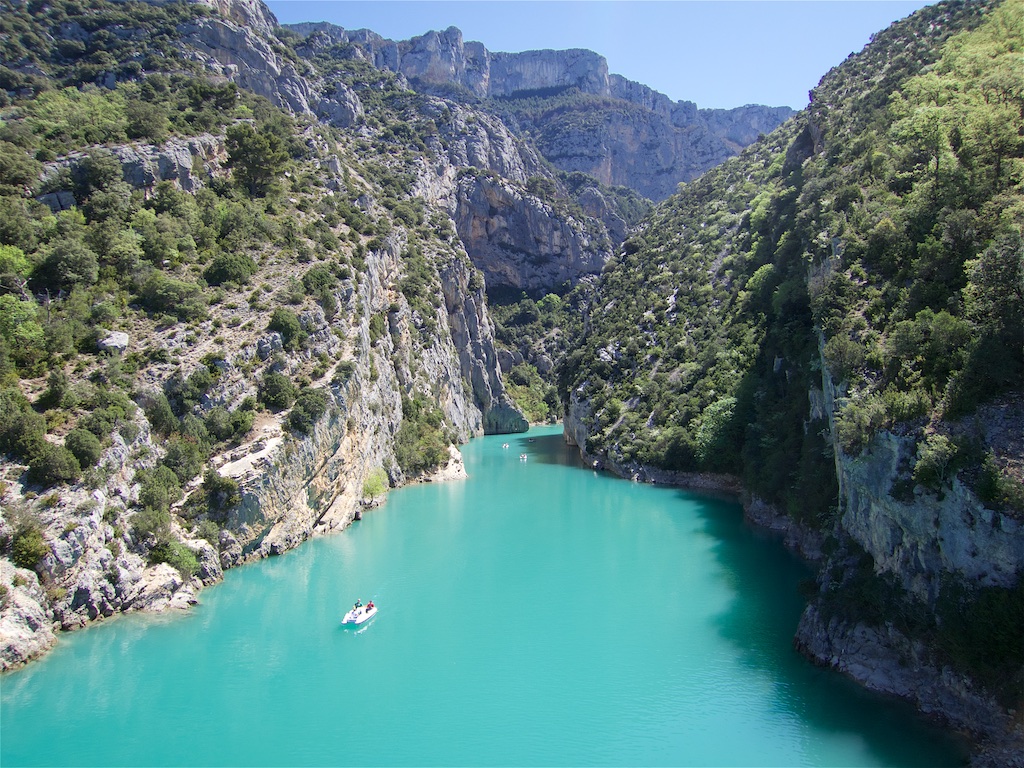 But I was only briefly beside the water. To re-enter the gorge it’s time to climb again. Soon I was high above Lac de Ste Croix enjoying more cliff roads. This cliff stretch heads steadily higher for more than 10 kms, reaching Col d’Ayen at 1031 metres. 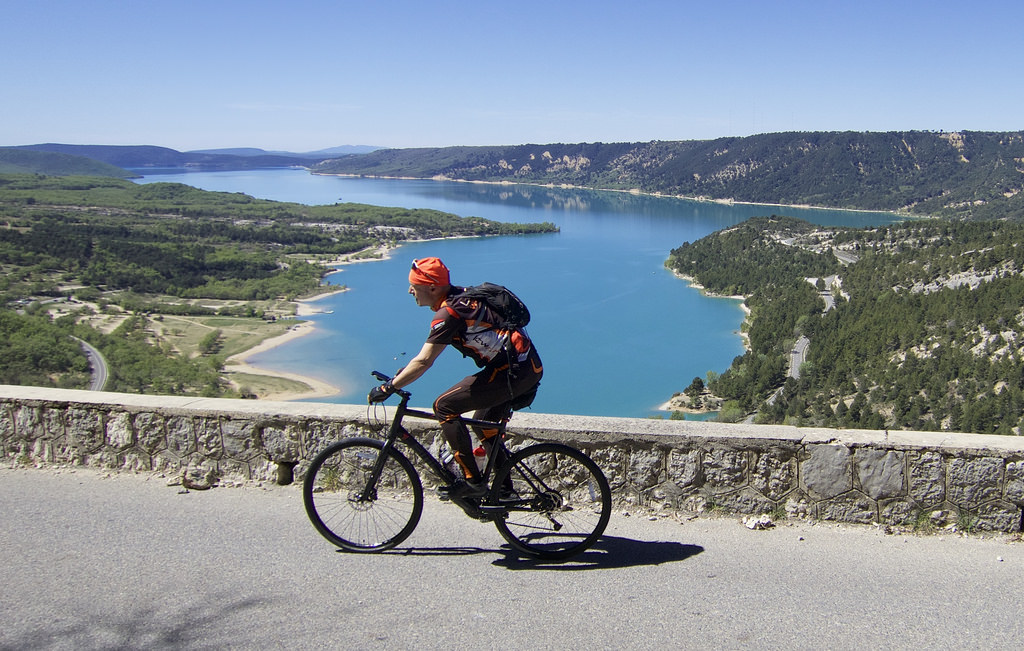 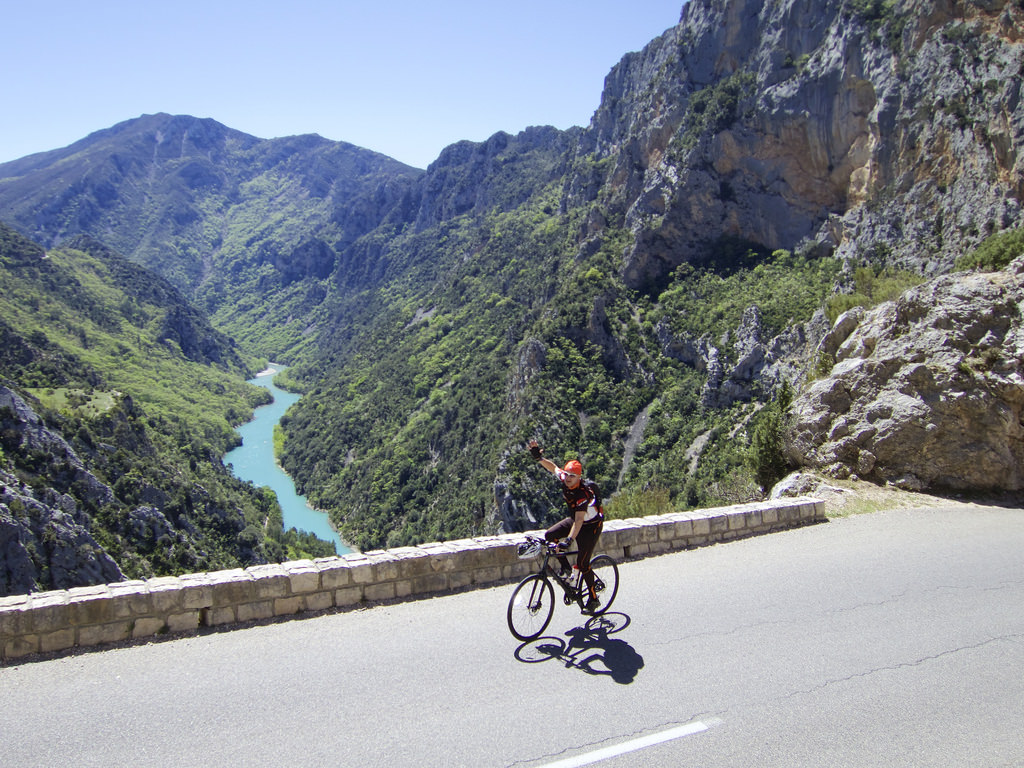 Descending Col d’Ayen into the village of La Palud, I stopped for more food, and had a decision. Continue around the gorge or take the Route des Crêtes. Some caffeine gave me the bravado to take the detour.

“The French built a road over Galibier to connect two valleys, the Emperor Ferdinand commissioned Stelvio to connect two of his kingdoms, but it appears the Route des Crêtes was built solely for the pleasure of cyclo-tourists.”

This smaller loop is approximately 23 kilometres with a high point just above 1300 metres. There are a few fairly steep kilometres, but with regularly spaced look-out points I had plenty of rest. 🙂 The route is signed and leads you in a clock-wise direction, as stretches on the far side are one way. 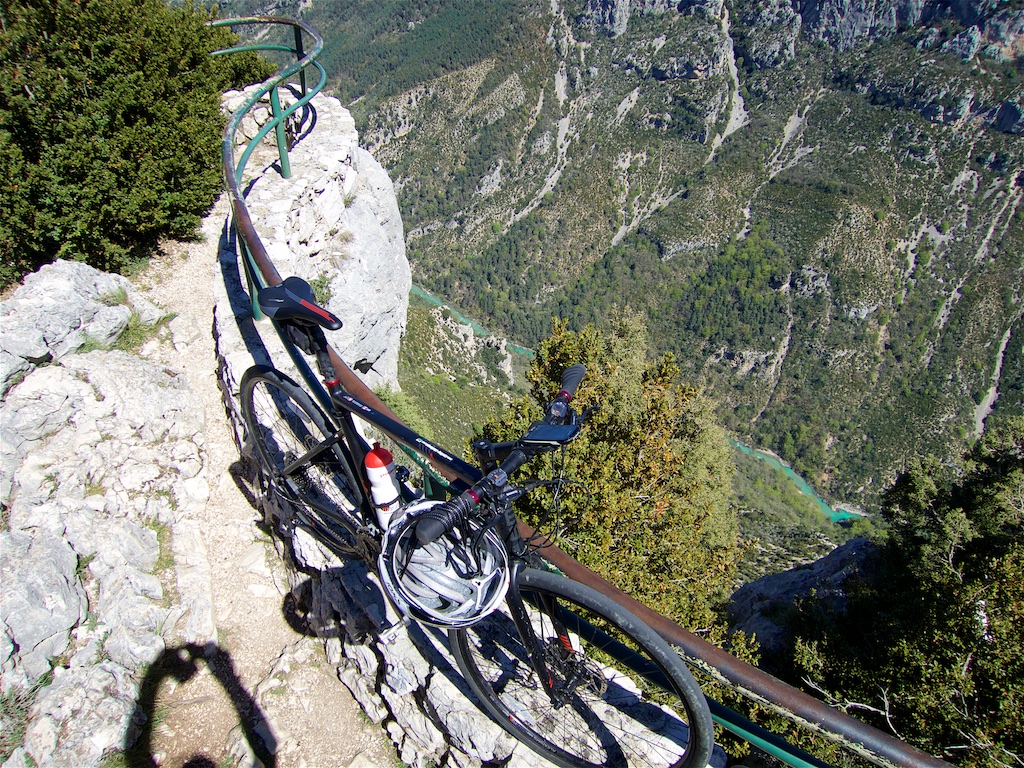 A long way down 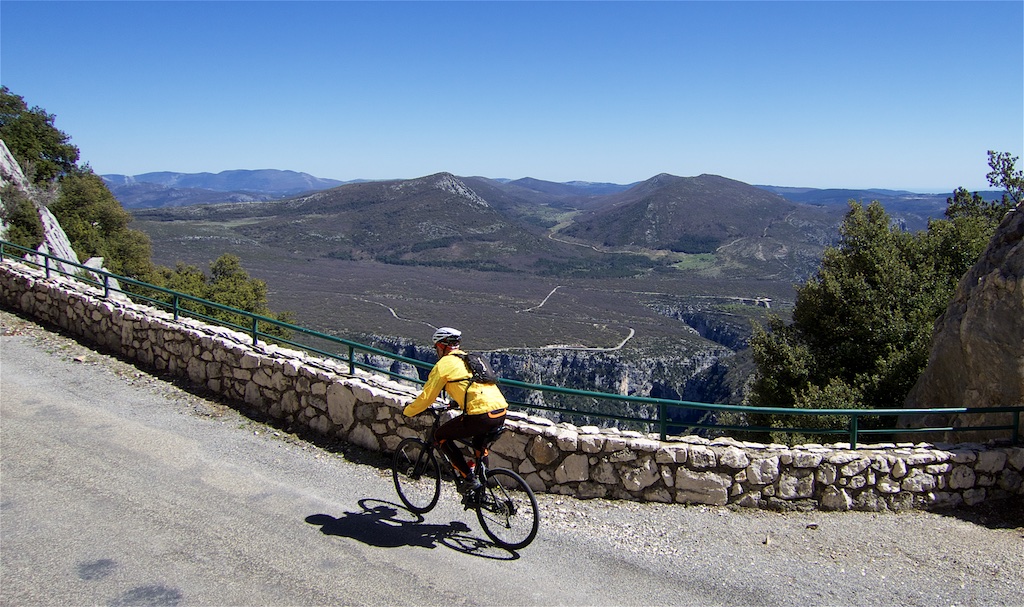 Roads in distance from start of day.

The descent is fabulous, with the occasional sexy hairpin. 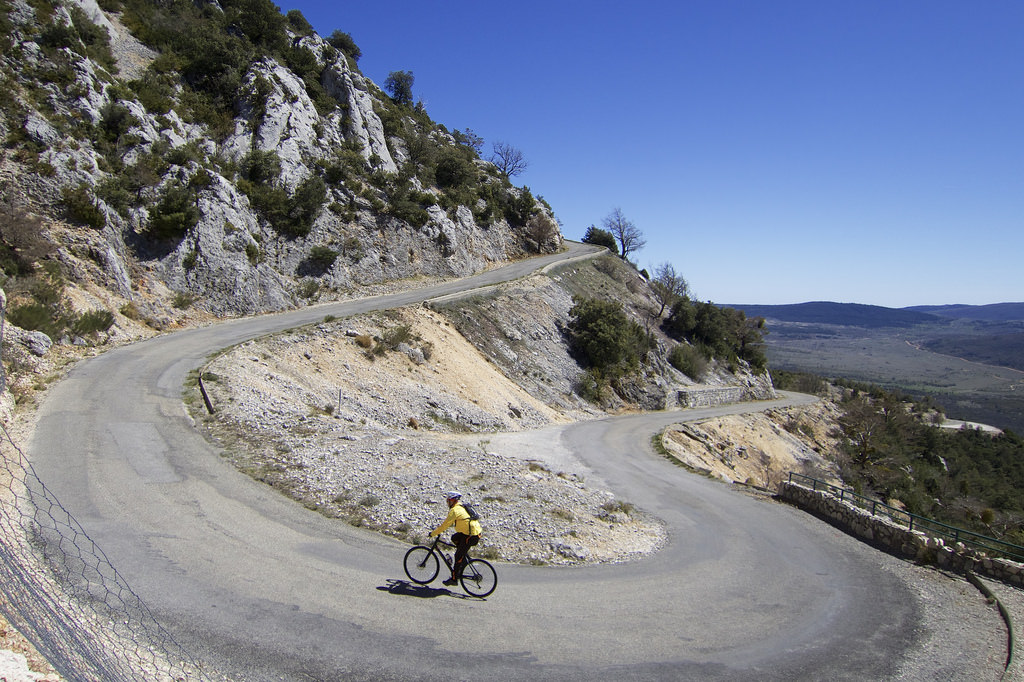 OK, yes, I was descending here.

Leaving the route des Crêtes there are still plenty of good views as the road descends closer to the river, but the crazy stuff was done for the day. I was thrilled I’d managed both loops and tiredly laughed as I slowly struggled up the two uphill kilometres to my perched hotel that I’d been fearing all day. 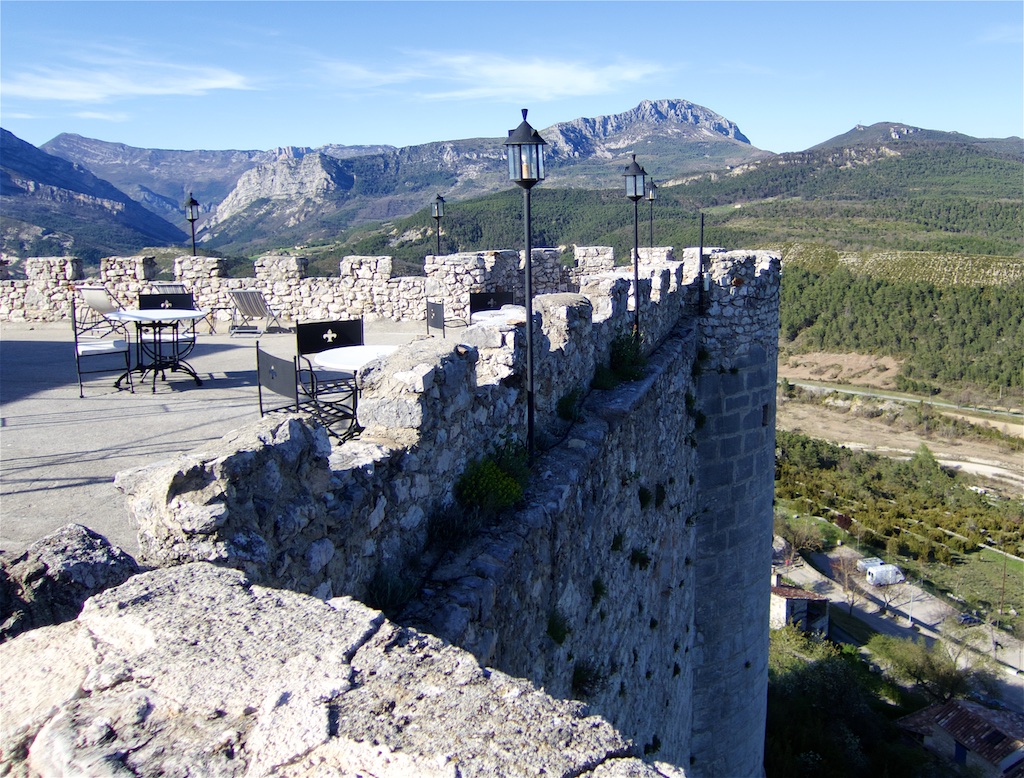 Wow, this is truly an unbelievable route. The lousy parts are great; and the best parts are as good as it gets. My only tip: if you can, try and visit in the off season as the roads get busier June through August.