Lac de Sainte-Croix is an artificial lake created in 1973 with the construction of the Barrage (dam) de Sainte Croix at the foot of Les Gorges du Verdon.

This is not the toughest loop, but scenic and relaxing. However, starting beside the beautiful perched village of Moustiers-Sainte-Marie, almost immediately are a couple of very steep kilometres climbing to the plateau on the north side of the lake. Le Cycle Magazine claims it’s a full kilometre at +16%. I’d say 13%. Regardless, this is the major difficulty of the loop.

This north side is well known in summer for its fields of Lavender. But currently, it’s a touch early in the season.

On the west end of the lake, the route descends to the water. There is a big bridge where the Verdon river exits the lake, and the dam is just beyond:

On the bridge I met a friendly English cyclist that lives in the region. He recognised me from this blog, and kindly took a photo. Thanks! My apologies for rudely not getting your name and taking a “team” photo. 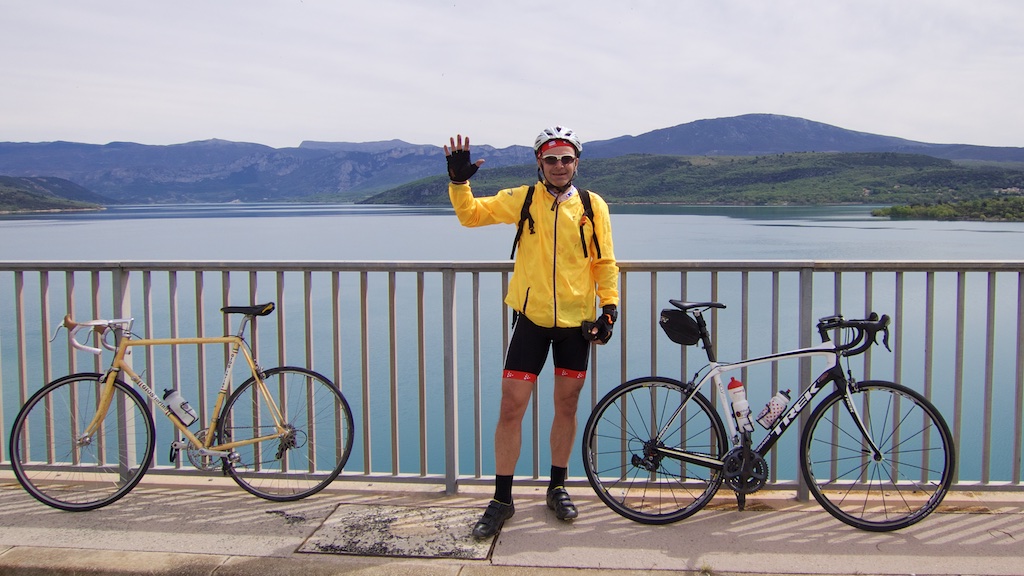 The road leaves the south side of the lake and gently climbs for a few kilometres. As you’re descending back towards the lake, spare a thought for the village of Les-Salles-sur-Verdon. The original village was on the flood plain of the planned lake. Residents were forced to evacuate in 1973. The town, including the church, were dynamited and the ruins are now under water. The town was relocated on the new lake’s shore. It is the youngest village in France.

Finally, the route crosses a bridge where the Verdon river exits the Gorges du Verdon before heading back to the start at Moustiers-Ste-Marie.

This was an easier, and less spectacular ride than my previous two Verdon loops. But relaxing, scenic, and enjoyable.