Trending
You are at:Home»Alps»Italian Alps»Monte Grappa – The Two Steep Sides

In Daniel Friebe’s great book Mountain High, he describes five routes to the Cima Grappa (summit). Sunday, my plan was to see the two I had not visited the day before.

Friebe had called the side starting in Possagno one of the toughest climbs in Italy. The profile made me nervous but I wanted to see the Tempio Canoviano near the start. It’s an impressive Neoclassical structure built in the early 1800’s inspired by the Greek Parthenon. 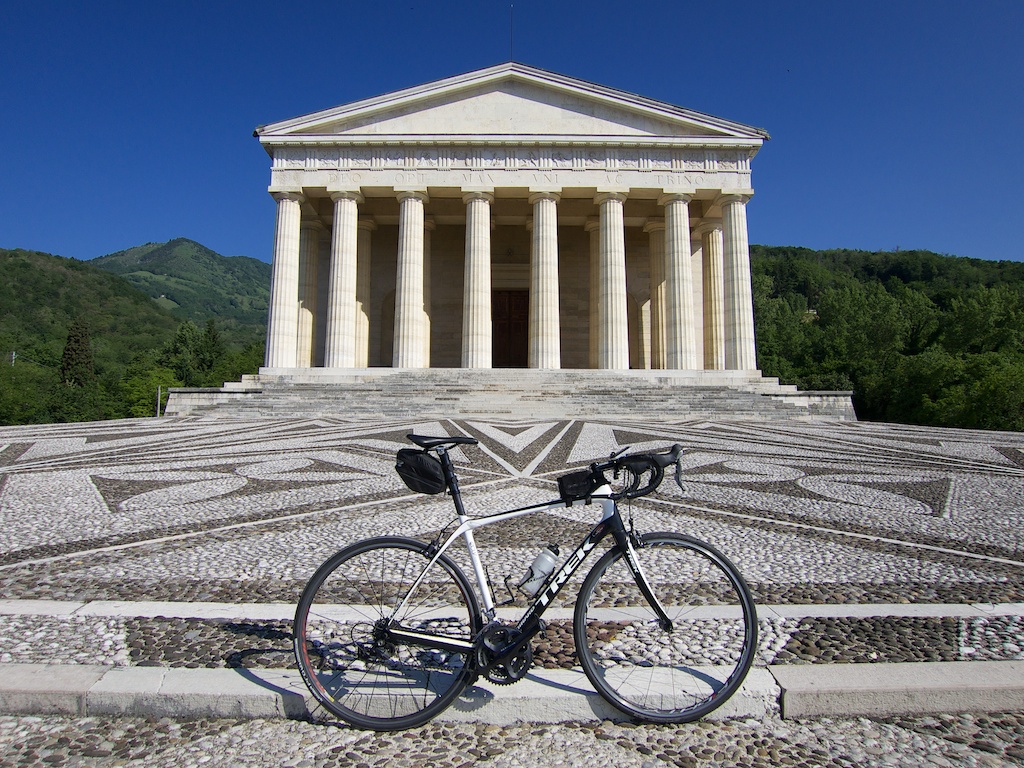 From Possagno, the first 12 kilometres are on a tiny road that is about as steep as anything I have ever ridden on a road bike. I took no photos as I was busy struggling not to fall sideways. I knew there was a kilometre long +20% stretch, but before this were also long, terrible ramps in the high teens. Wow.

Honestly, I would not recommend descending this side . It is just too steep and poorly surfaced to make descending fun or safe. Below, I have also included the profile for the side I would eventually descend, just west, the Salto della Capra (Goat Jump) climb that starts near Paderno del Grappa. This is also brutally steep, but it is better surfaced, a little wider, and thus a much better choice for the descent. I’d also say it’s a more attractive climb with many more hairpins. 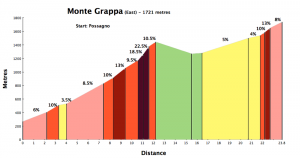 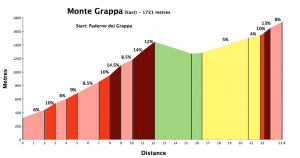 I was thrilled (surprised?, relieved?) to get above the 20% stretch. The route then joins a bigger road. Further east, there are other start options to get to this point, from Pederobba or Pieve, for example. Both probably better choices unless you love kilometres of super-steep nonsense.

From this intersection, the road gets more fun. A very nice long hairpin stretch. Much of this route goes along a front line during World War One and you can see endless shelter caves cut into the rock. There is a great Alpini statue that starts a historic hike along the ridge. 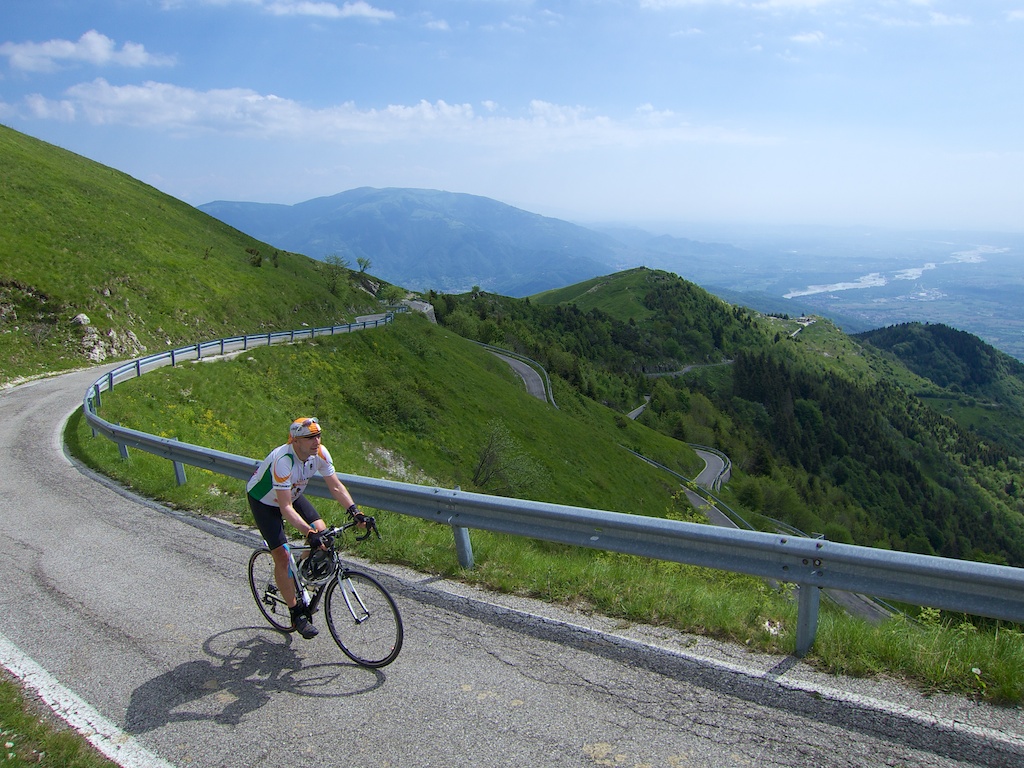 Above the steepest stuff

After roughly twelve kilometres, the route descends into a valley on a really fun road, turning up towards the summit high in the distance. I had seen this road from the summit yesterday, thinking it looked amazing, and I was thrilled to find myself on it.

Next, the route takes a superb cliff road, with the Veneto Plains well below and several tunnels cut through the rock, before joining up with the Semenzo road from yesterday, perhaps four kilometres from the summit. 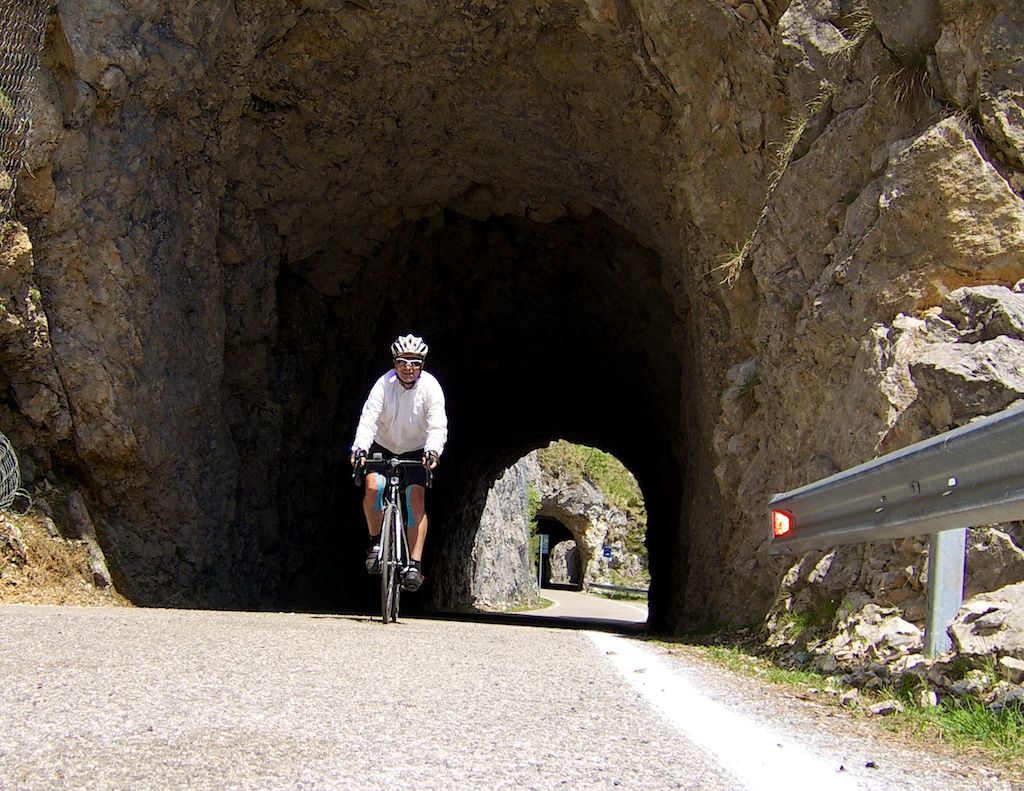 In yesterday’s post (linked to above), I showed many of the monuments and hairpins at the higher part of the climb. It’s fascinating place. Photo from Saturday: 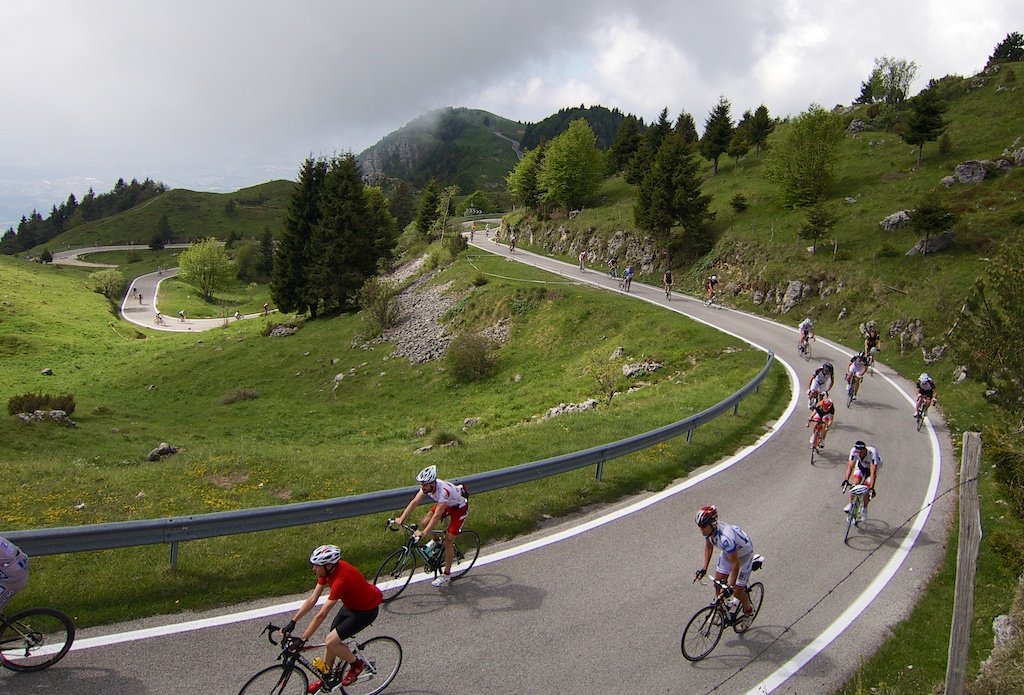 Today, I decided to walk up to the highest part of the monument – to see the part I had missed Saturday when the Alpini kicked me out for bringing a bike. 🙂

The top is a truly impressive, moving place. Again, the remains of approximately 23,000 soldiers are in the ossuary, the majority unidentified and almost half Austro-Hungarian. 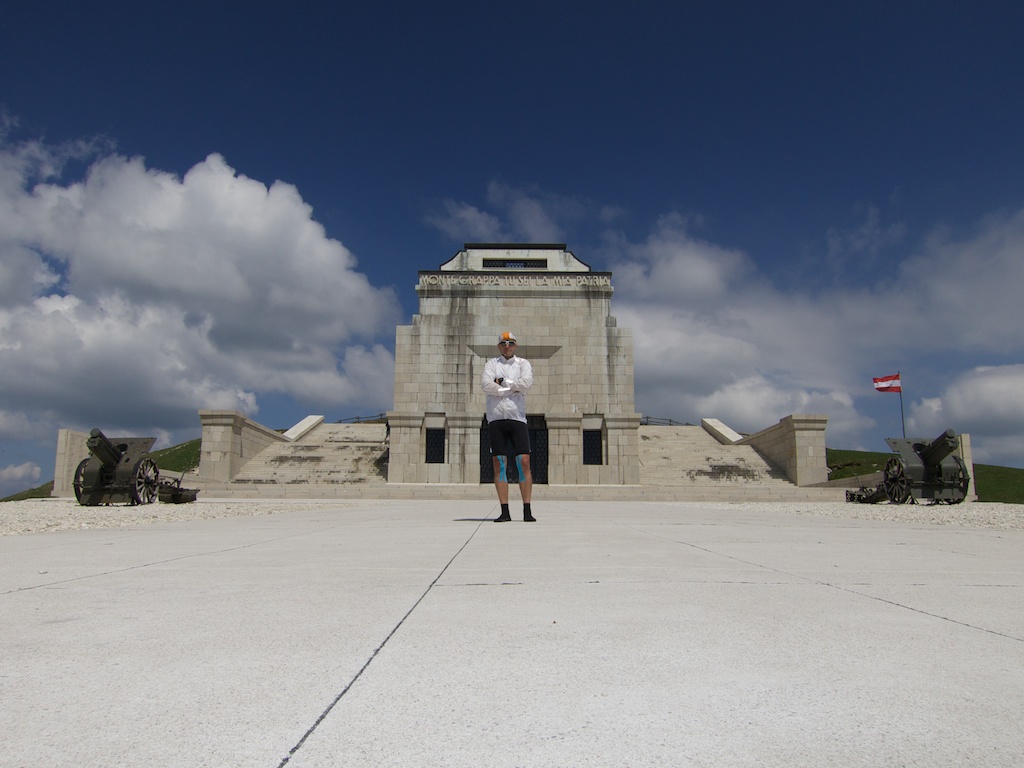 I descended the way I came, but at the Salto delle Capra (goat jump), I turned down. I am kicking myself for not taking a photo of the big goat sign high above the turn off here. But in short: It is a well named cliff.

As I mentioned above, this is a well surfaced, hair-pin-filled, very steep, quiet road. Crazy but fun. Mainly in the trees, but occasionally with great views of the plain below or the Cima Grappa in the distance. 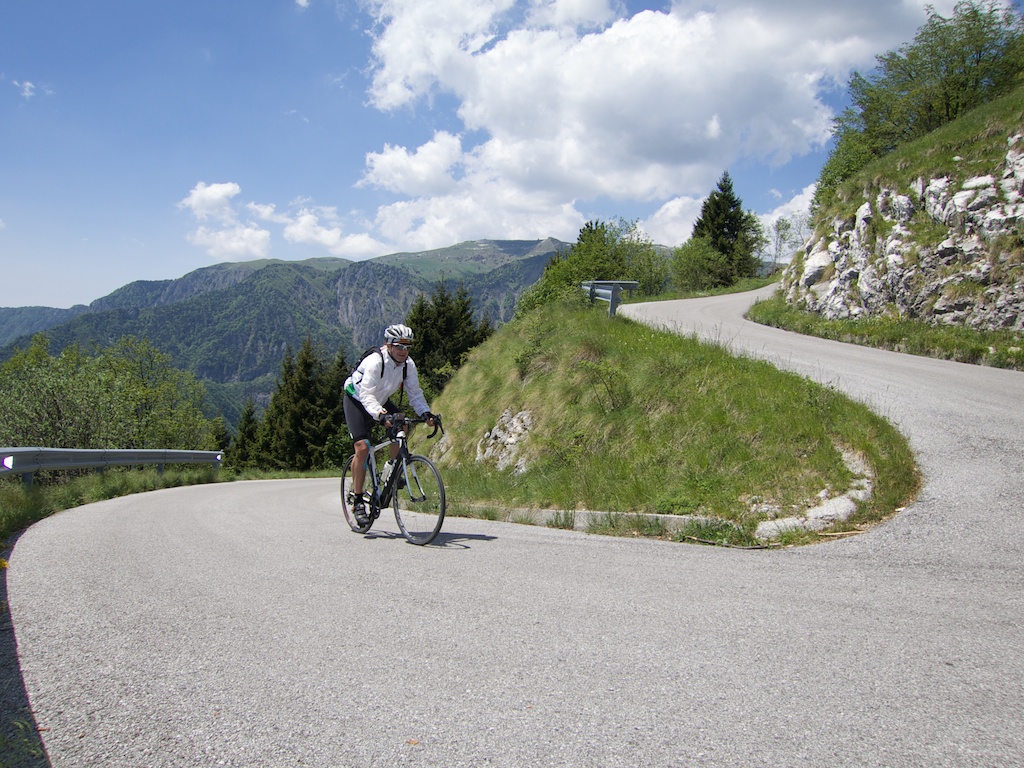 Below the Salto della Capra – Cima Grappa behind

This wrapped up a dream weekend where I saw fives sides (climbing three) of this cycling mecca. I never understood until now how difficult a place to cyle this is. But also how varied and interesting a place.

Here’s a map with all five routes with the three profiles not included above (click for bigger versions):