Central Switzerland has some of the highest, most beautiful paved passes I know. The most famous are big roads, well surfaced. One can make brilliant loops with combinations of Nufenen Pass (2478m), Grimsel Pass (2165m), Furka Pass (2436m), Susten Pass (2224m), Gotthard Pass (2108m), and others.

See here for details of the 20 highest paved climbs in Switzerland.

This ride I wanted to revisit the amazing hairpins of Grimsel and Furka. But more importantly, to visit for the first time a not-well-known little road that extends for almost 6 kilometres above Grimsel Pass to the Oberaarsee dam/lake. It’s the 5th highest paved road in Switzerland (note, the Grimsel profile at left excludes this extension).

I started in Ulrichen, in the Canton of Valais/Wallis. Note, at the start there is a long tunnel section before the climb begins. But as the map below shows, there is a perfectly paved little path beside that avoids the tunnels.

Both Grimsel and Furka share the first few kilometres up with the road splitting at Gletsch (1759m). There is always a little traffic here – motorcyclists love these roads. But they are wide and well engineered – it’s not too bad. I would first head to Grimsel Pass up a series of fantastic hairpins. Just short of the pass is one of the great cycling views I know. That is Furka Pass in the far distance. I’d be heading there later. 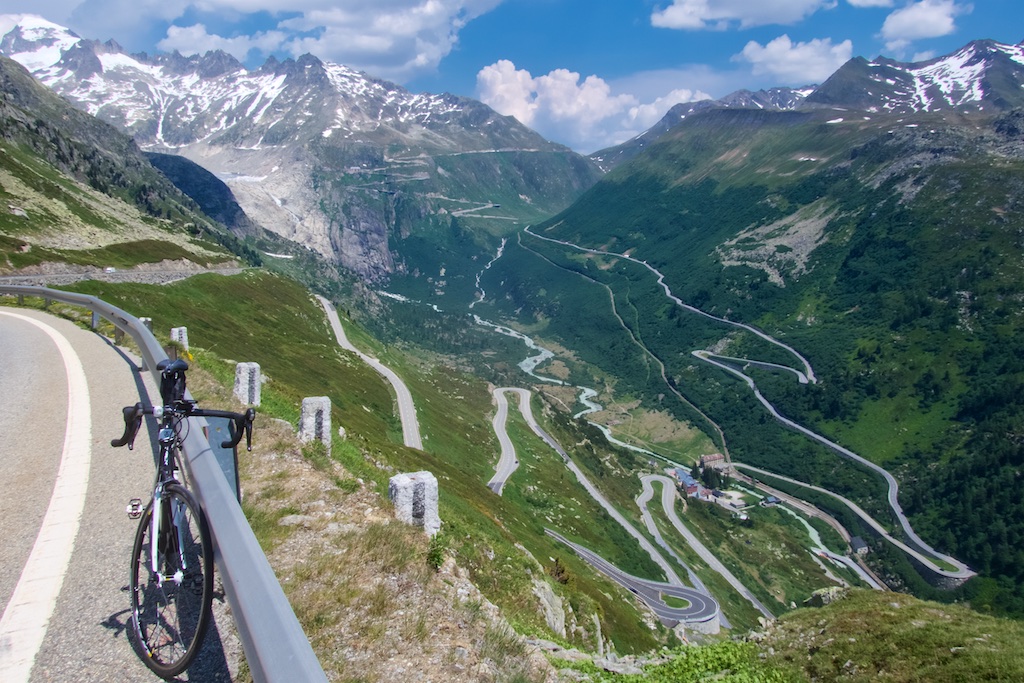 The pass itself is beside the Totensee, one of several dams/lakes around the pass. My German is not great but I think that translates to the Lake of the Dead.

Here is a big loop climbing the north (tougher) side of Grimsel, then Furka, then the giant Susten pass as part of the Alpen Brevet Cyclosportive. 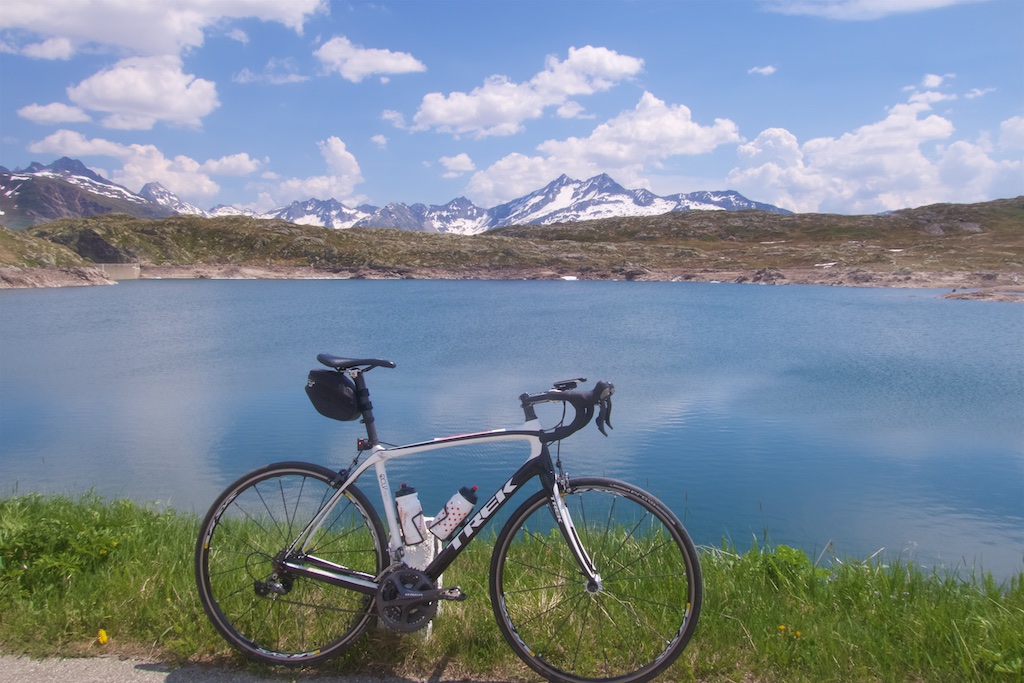 The pass is a big place, with restaurants, hotels, etc. Somewhere in the middle is a tiny road that heads higher. There was a locked gate preventing cars using it. Perfect. 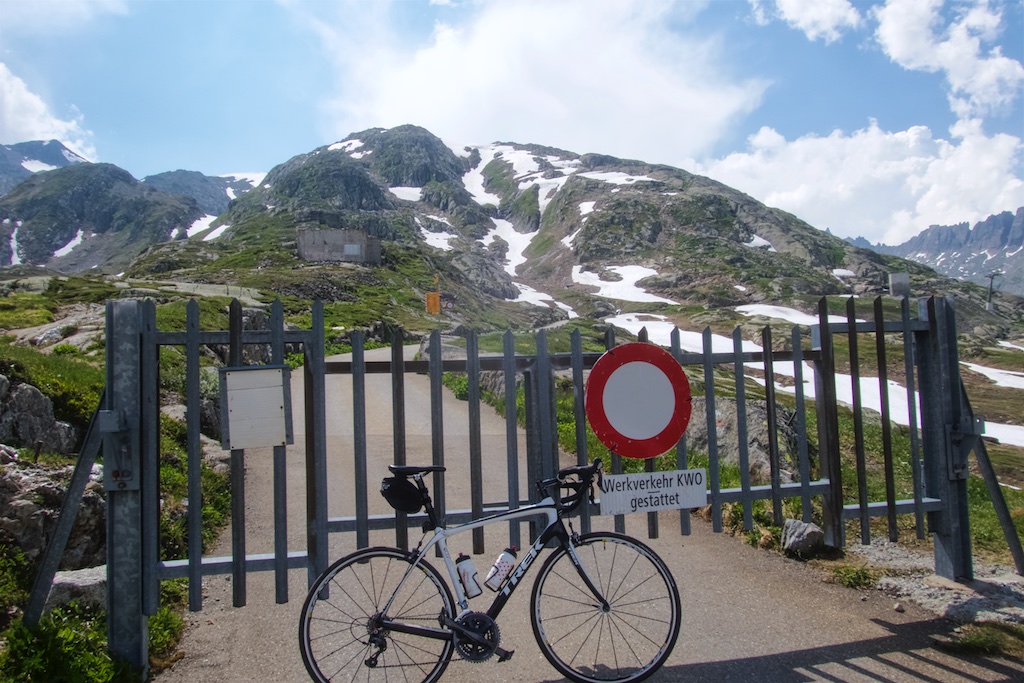 I found this little road quite extraordinary. It’s not too steep, but rises to 2390 metres before descending to the Oberaarsee dam/lake. Initially, there are incredible views of the north road to Grimselpass 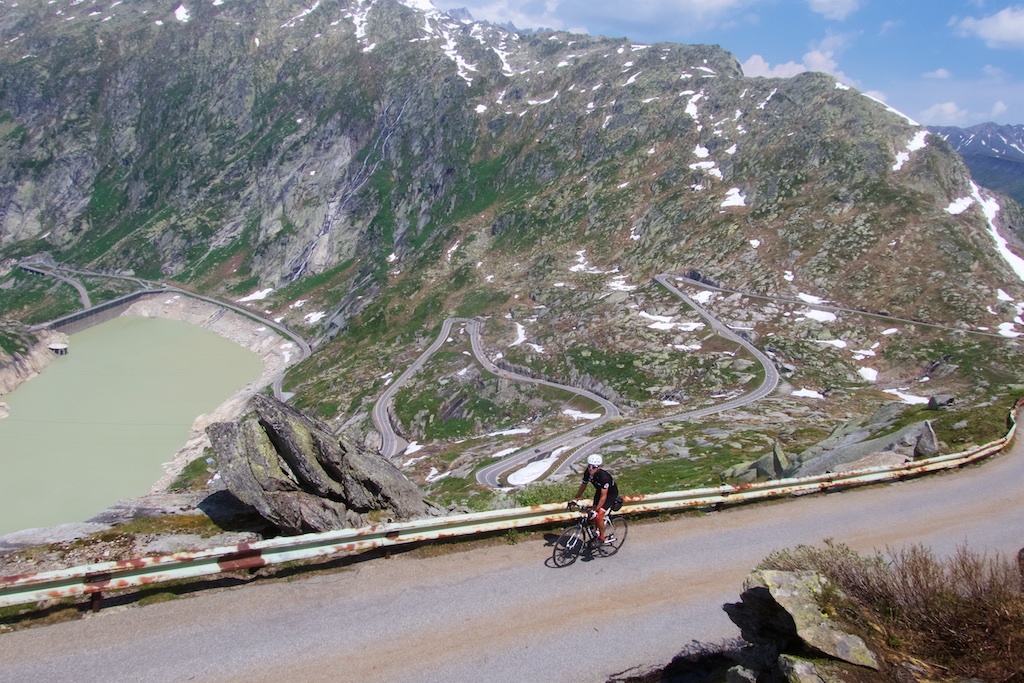 Then it runs along side, but well above, the huge Grimselsee/dam. 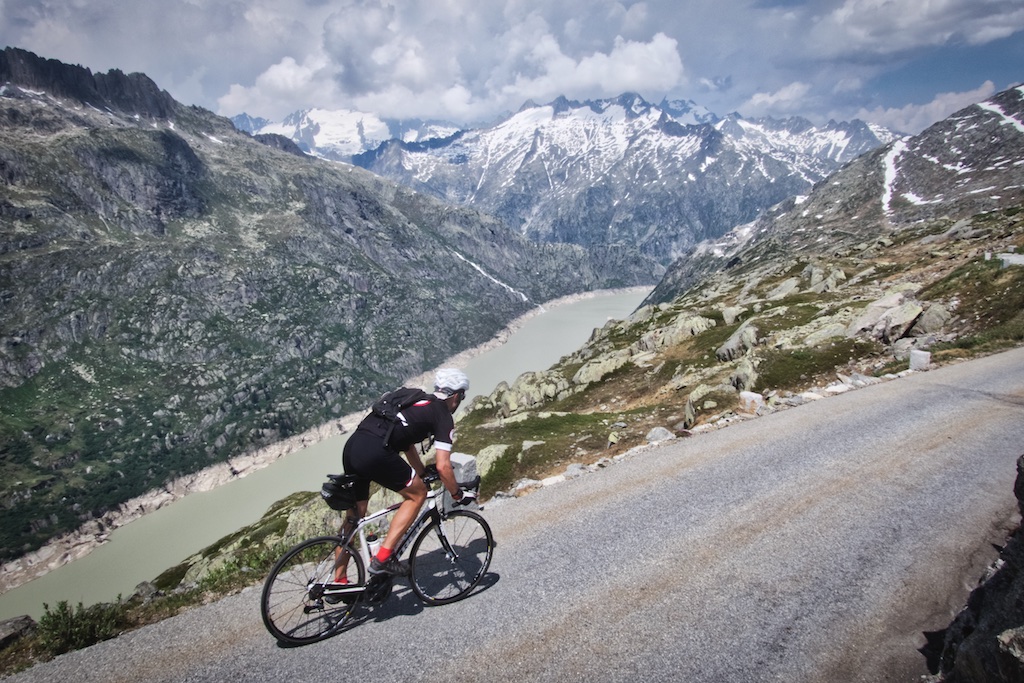 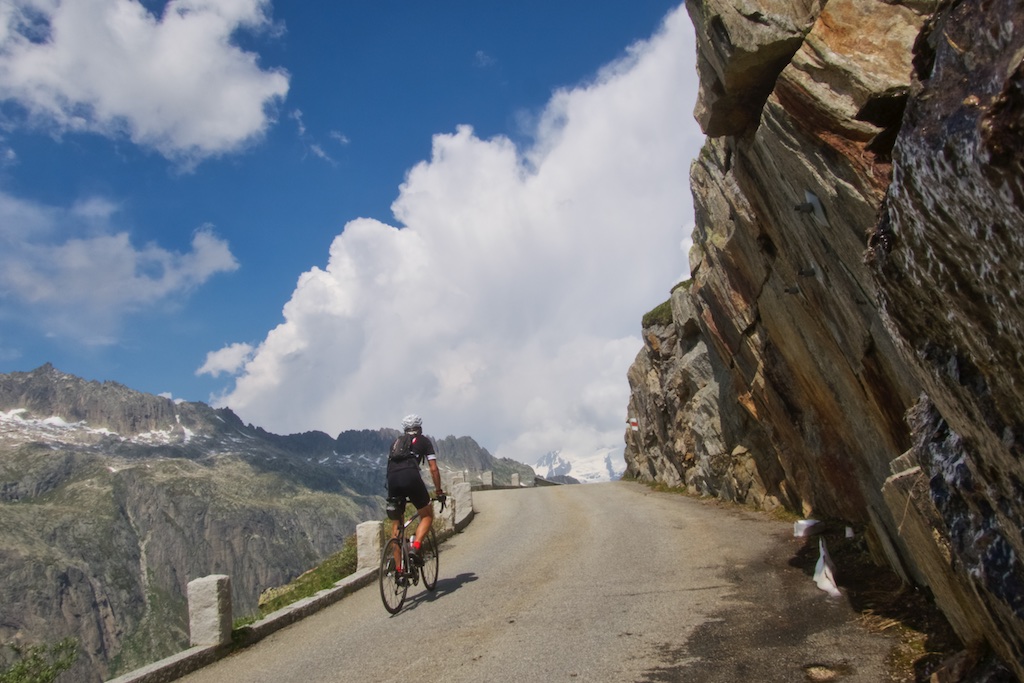 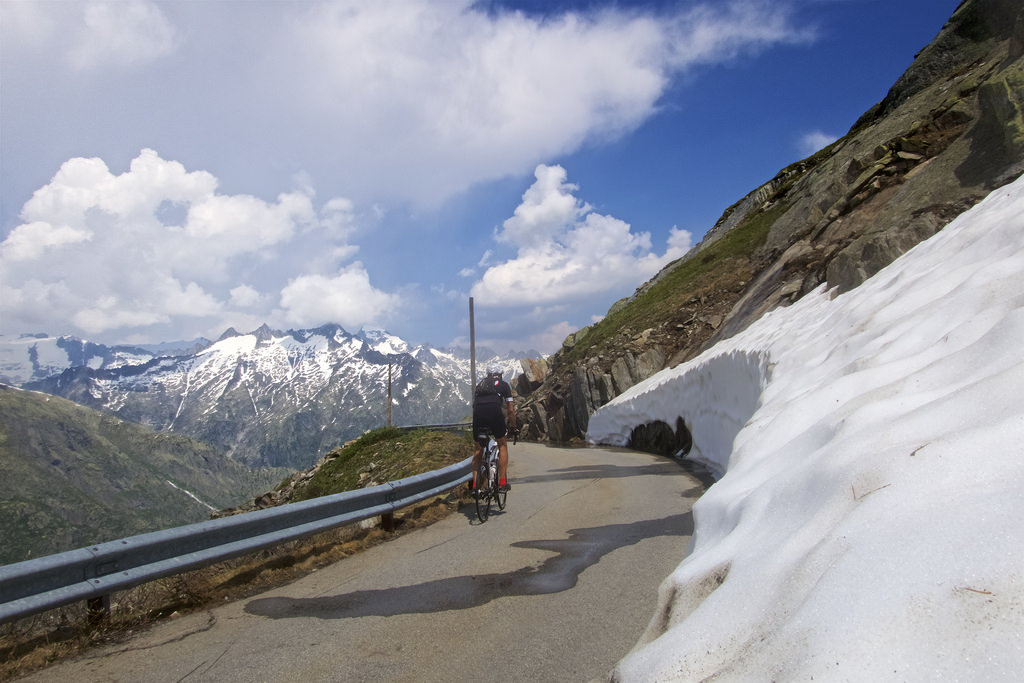 Finally, it reaches the Oberaarsee: 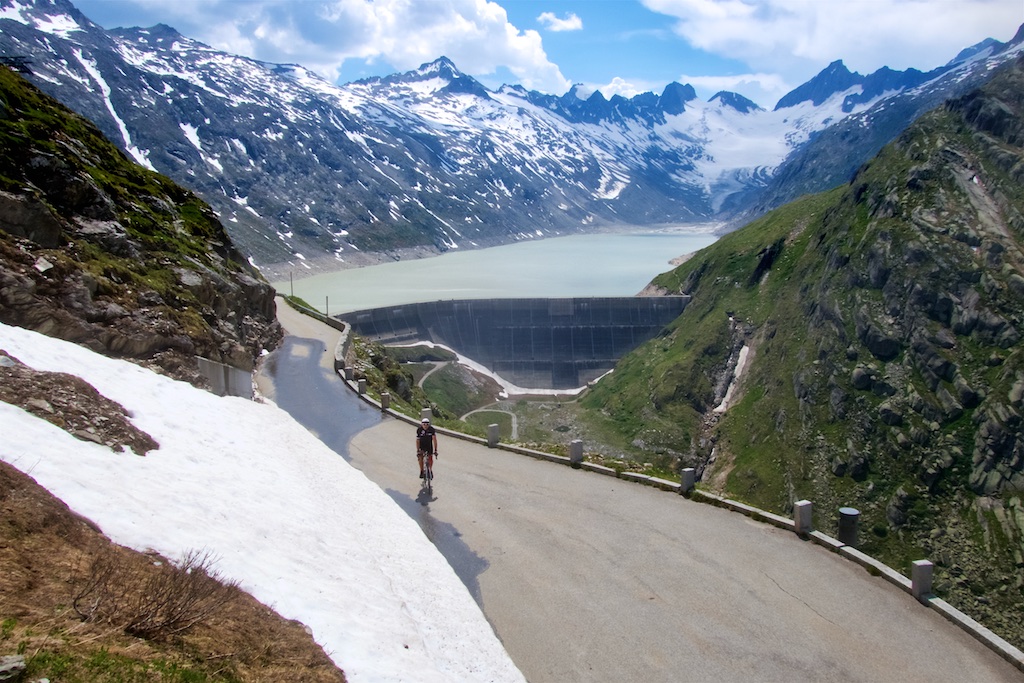 All-in-all, it’s less than 6 extra kilometres. But it’s so worth taking the time for this detour to the 5th highest paved road in Switzerland.

I was having one of those days with no energy, but I pushed myself to slowly descend Grimsel and visit Furka Pass. At 2436 metres, it’s the 4th highest paved road in Switzerland. I’ve written about it several times before. Here is a 2014 post that climbs/details both sides and talks about James Bond visiting here during Goldfinger – the sniper scene(!), etc.

I was struggling, so I stopped for ice cream at the Rhône-Glacier restaurant. Just above is the source of the Rhône river that runs through Switzerland and France to the Mediterranean. 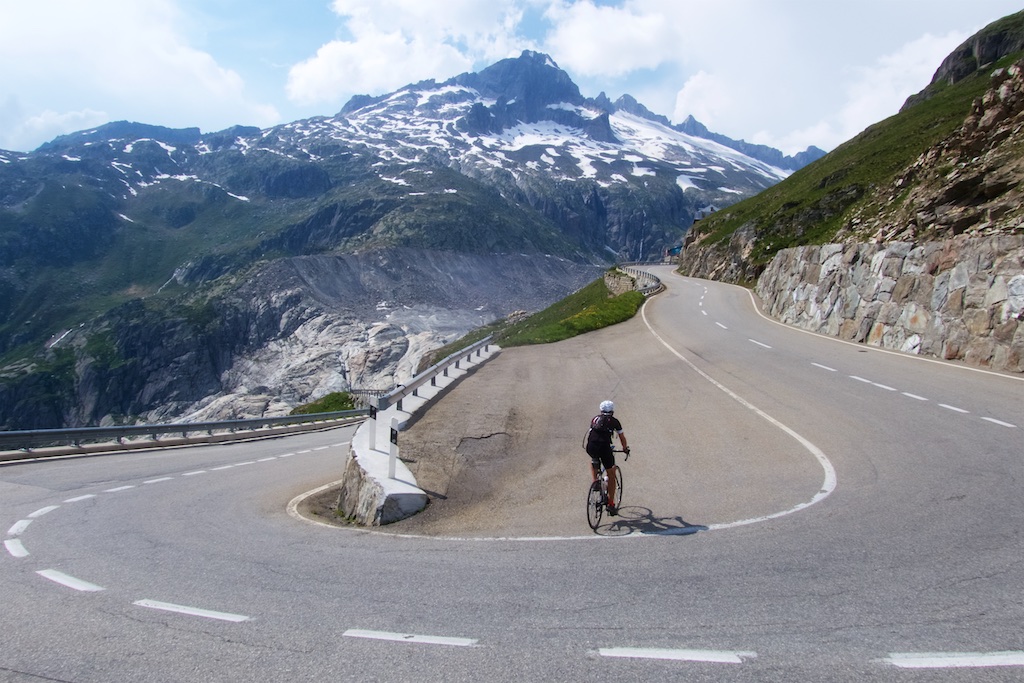 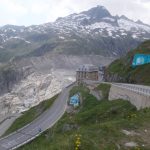 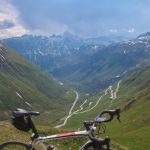 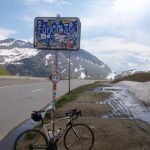 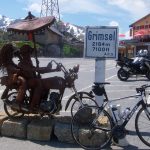 Finally, I just descended back to the start. A beautiful, beautiful ride.

Grimsel and Furka are two of the more beautiful high passes in the Swiss Alps. But remember to include the little extension to Oberaarsee for a special treat.