This was my first adventure not starting from home in quite some time. It felt great. I have written many times about Plateau des Glières. See this link that explains five more rides (the two paved sides plus three superb unpaved rides). In that 2017 article I admonish Prudhomme for never including Glières in the Tour de France. Now, three years later and assuming the 2020 Tour is takes place, Plateau des Glières will make its second appearance in September.

Below is a map showing the five rides mentioned above. Today’s (sixth) route is the yellow route:

I started today’s ride by climbing the paved west side. It’s steep, with lots of beautiful hairpins. This is the side the Tour will descend.

Note, the profile is for the main climb to Col des Glières. As described below, I would turn off just before the Col and head much higher on gravel. 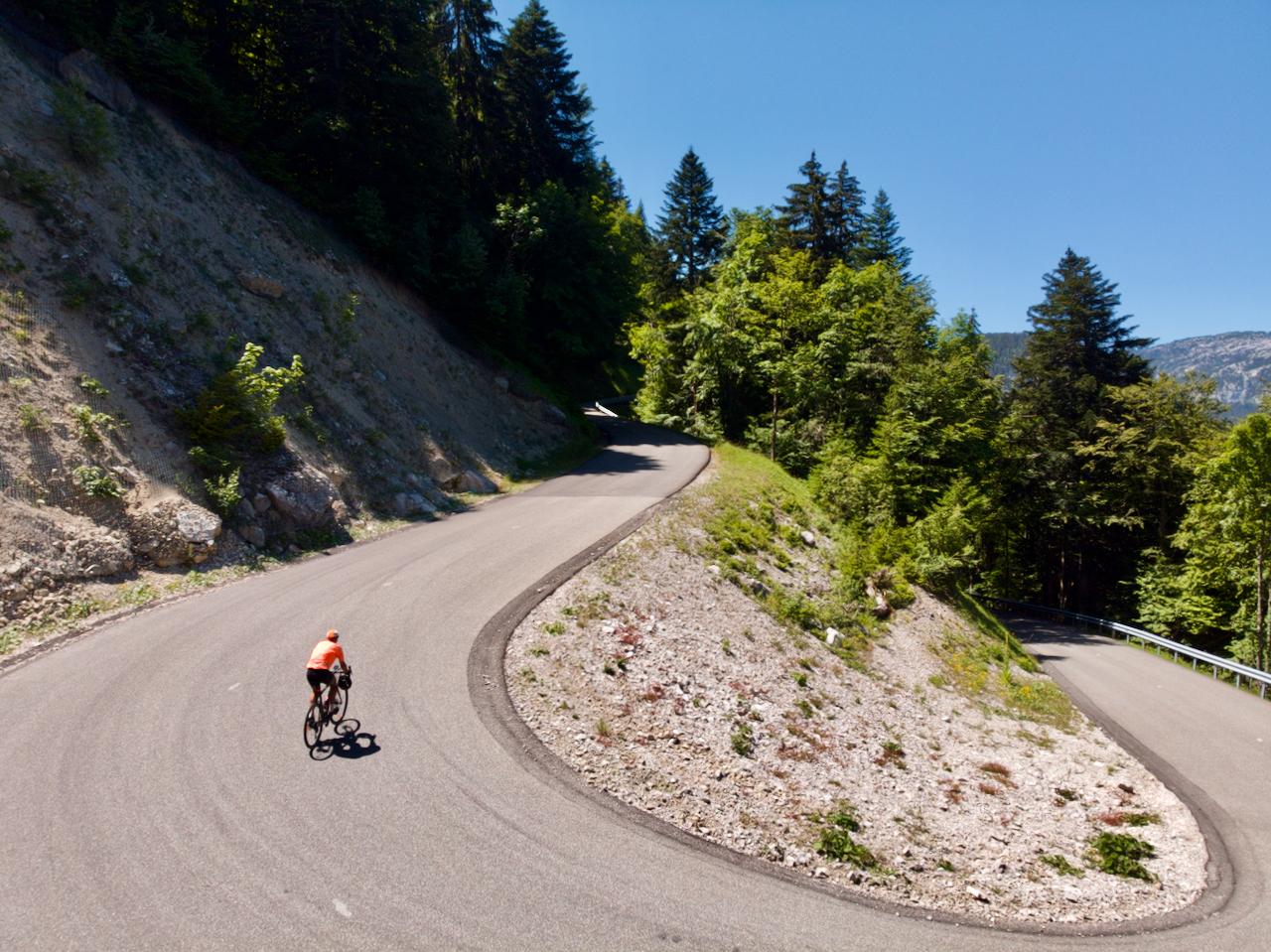 A couple of kilometres before Col des Glières is a col/pass – Le Collet (1330 metres). The road then briefly descends. Here, I turned off the main road to begin the gravel adventure. First, I headed to the another col: Passage de la Gloire (1350m). It’s a tricky couple of down-and-up kilometres on rough gravel.

I believe Passage de la Gloire was the closest cyclable col to my home that I had never climbed. During lockdown, I added to the top of my list :).

Note: unlike the gravel on the Plateau that the TdF will traverse, this gravel is far too rough for a road bike.

After the pass the road descends sharply then gets steep. It becomes a hiking trail and heads towards a couple of cols that I have never visited. But I don’t think they’re rideable (Col de la Bourse, Col du Pertuis). Feel free to post a comment if you’ve ever hiked them.

Thus, I turned around. But before reaching the paved main road, I turned right onto some gravel that enters the western (less well known) part of the Plateau. I would pass Notre Dame des Neiges chapel, the first time ever seeing it without cross-country skis (the Plateau is probably my favourite XC skiing domain). I would continue higher on great but rough gravel. It’s always rideable, but at times quite steep/slippery. At least until I reached Plan du Loup (1670m). 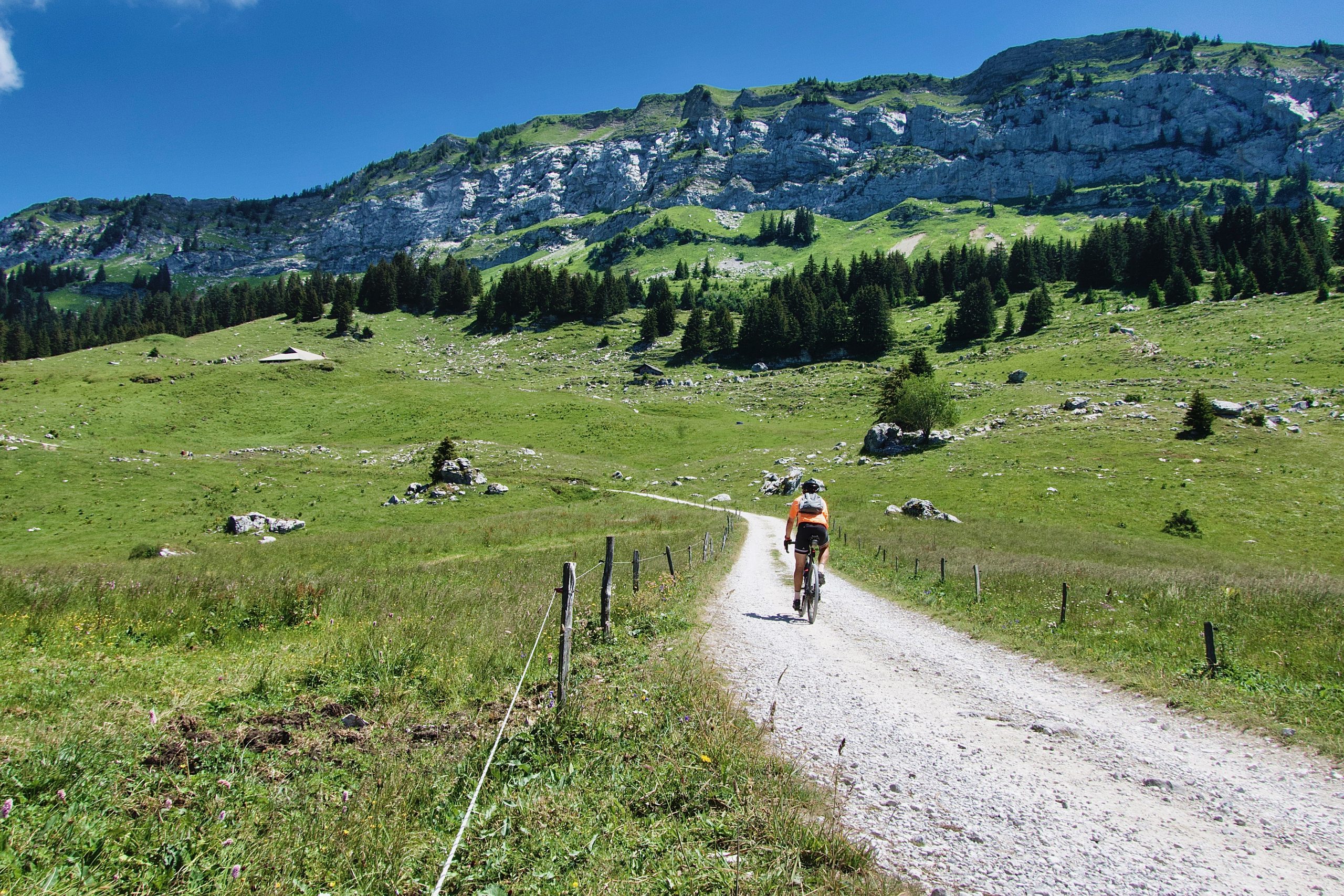 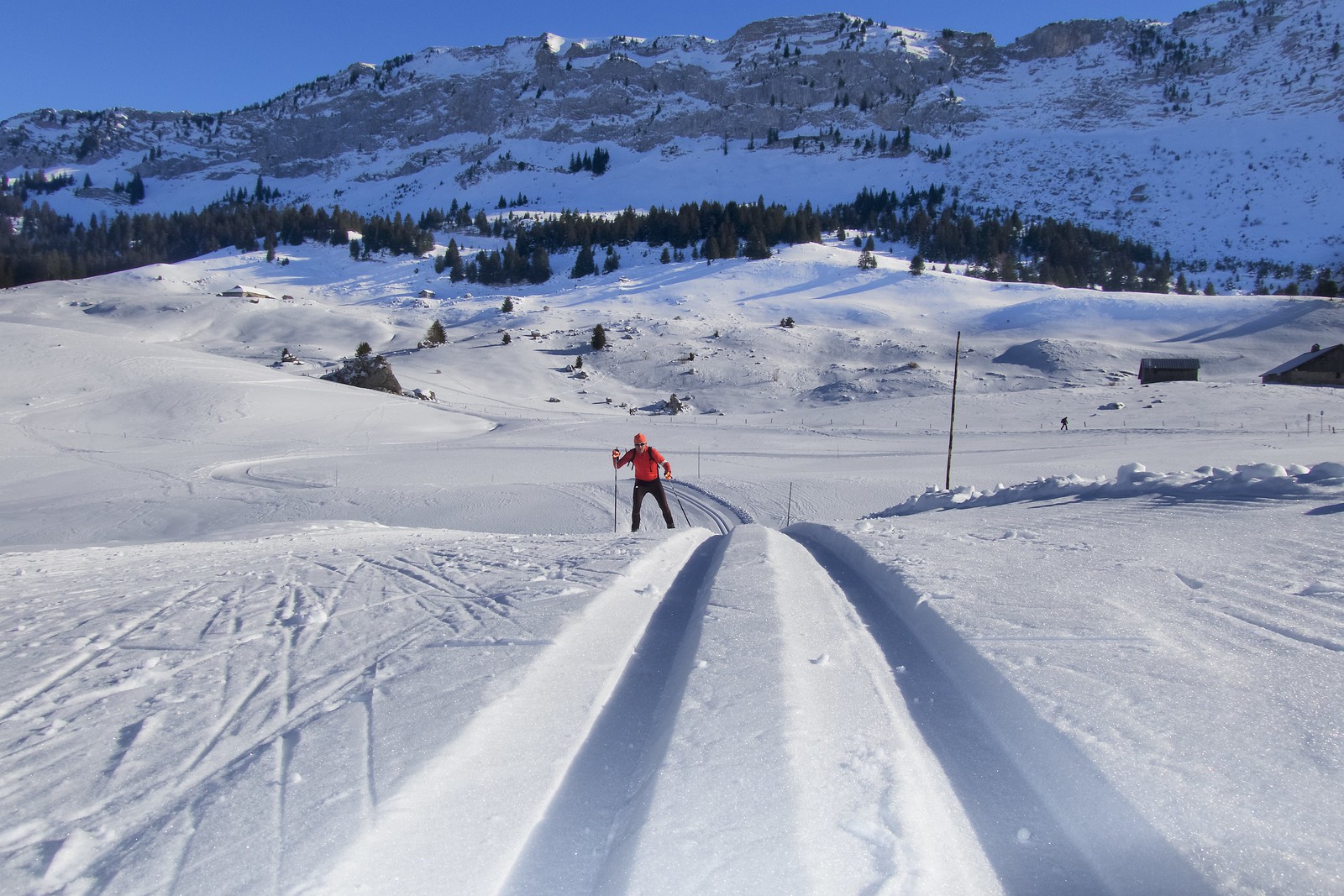 At Plan du Loup, I decided to visit Col de l’Ovine. I knew it would require a kilometre of bike carrying/hiking but it was a nice day and I wanted to see over the top. It is not dangerous, but it’s a rocky, tricky, well-used hiking trail. Almost completely unrideable.

Here’s a photo of the Col taken later in the day from near the summit of the paved road at Col des Glières: 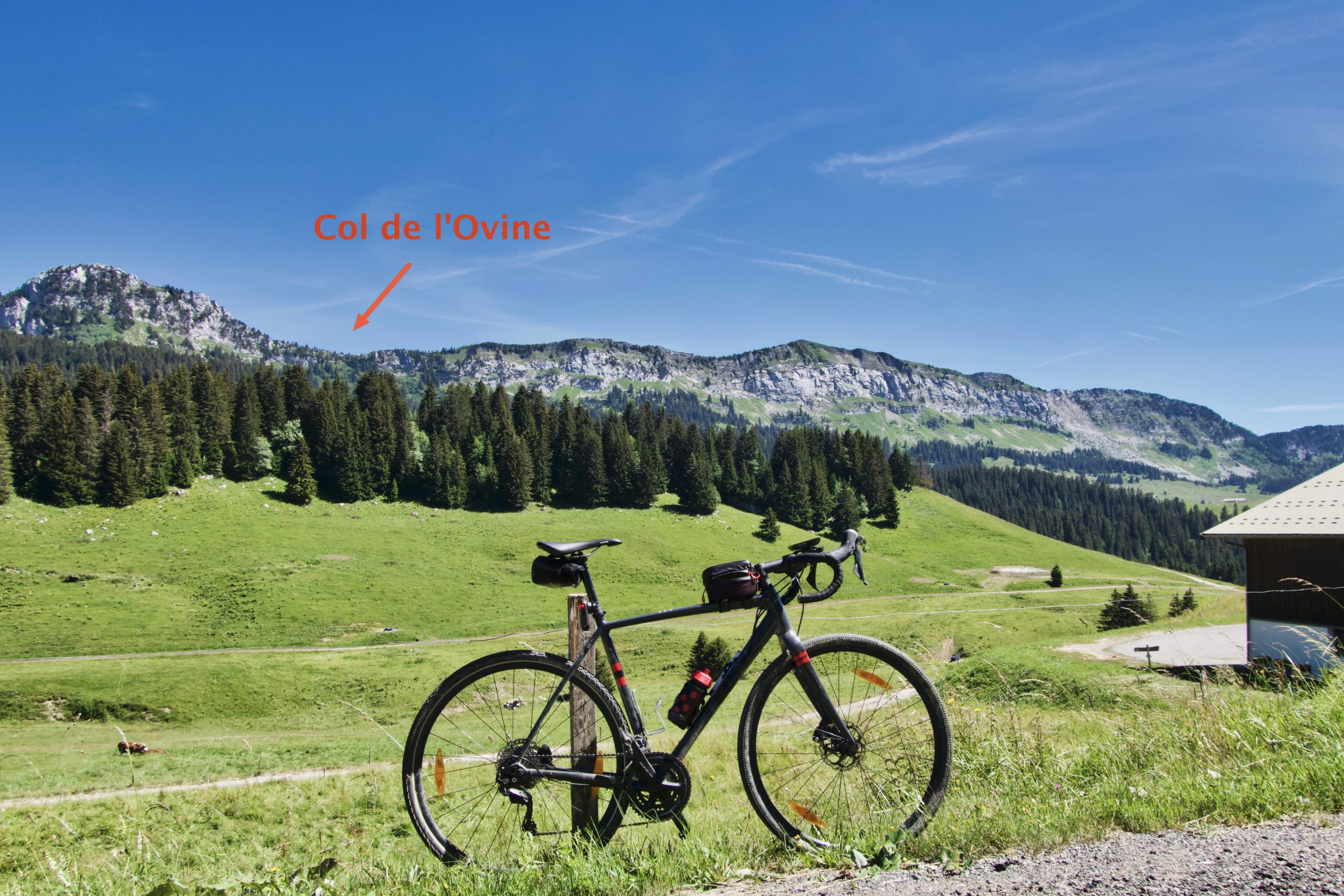 And here’s a photo from Col de l’Ovine looking down on Col es Glières:

Col de l’Ovine is the top of the mountain ridge. So looking in the other direction (south), I could see Mont Blanc: 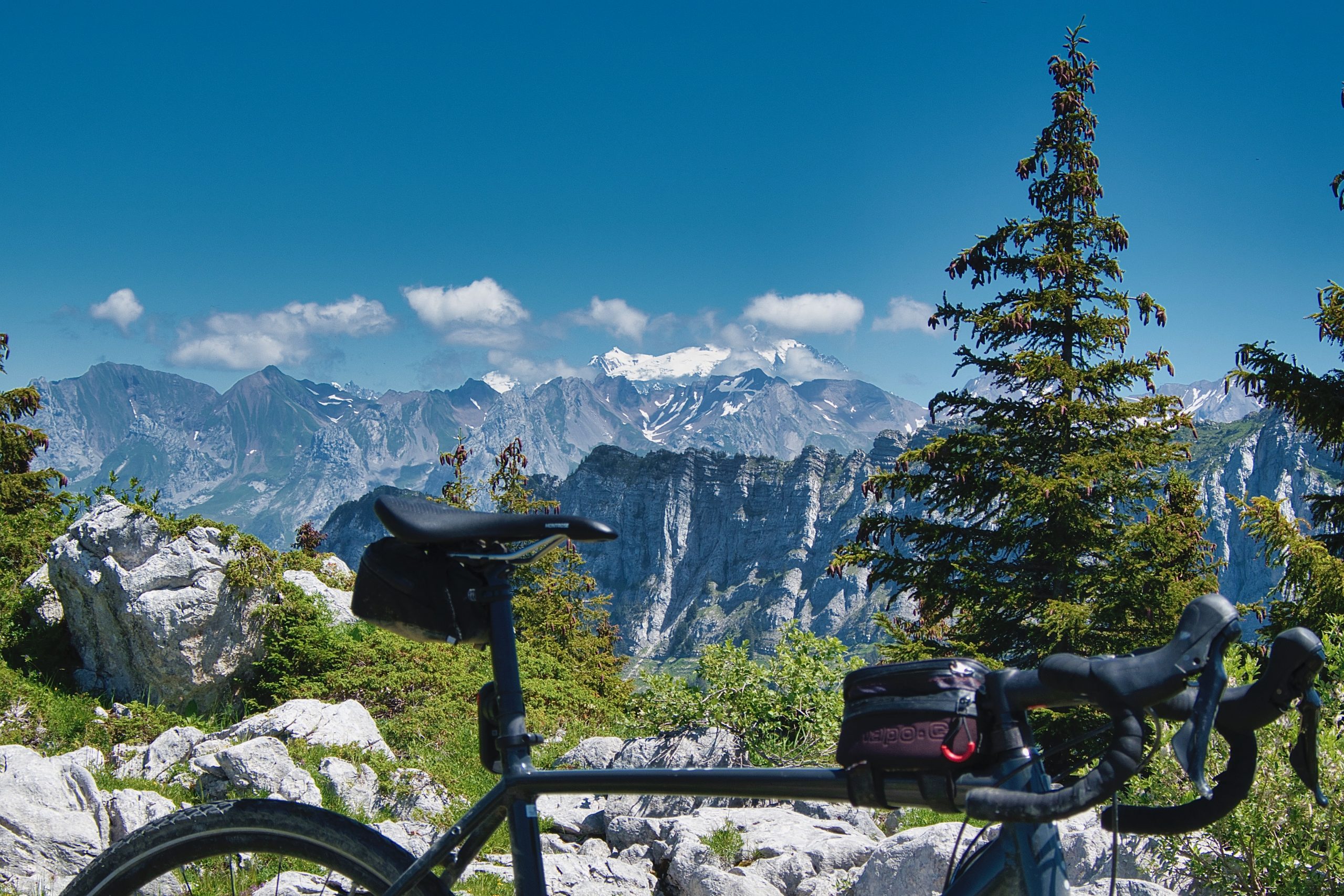 Next, I descend to Plan du Loup and had a think. The correct decision was to descend the gravel farm roads that I had climbed. But, I decided to follow the signs to Col des Glières. This ended up being a steep – but high quality – hiking trail through the woods. Mostly unrideable for me and my gravel bike. A talented mountain biker could do better. But no worries, it was a nice hike down.

Before rejoining the paved road, I visited the Monument National à la Resistance. 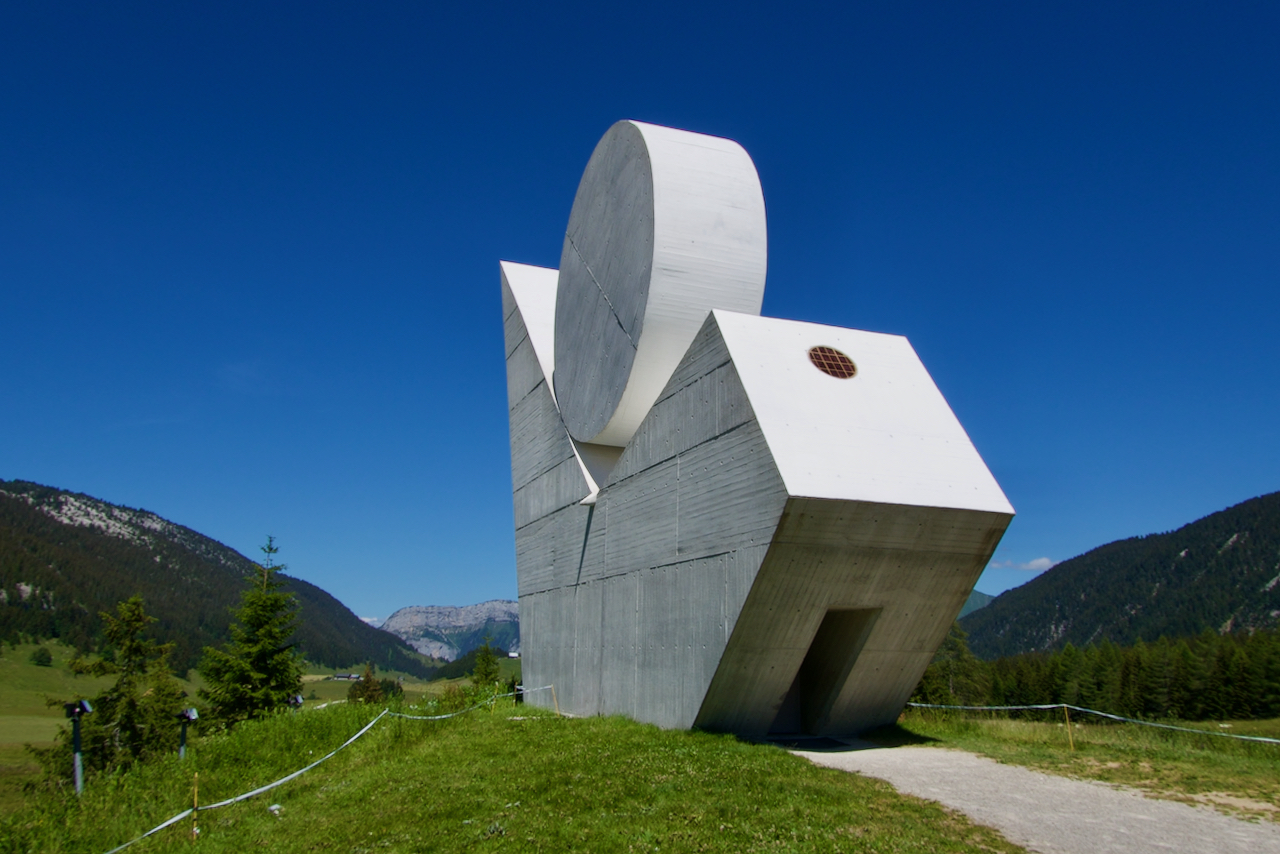 It’s quite possible to make a big loop by traversing the gravel from Col des Glières and descending the far, super-steep paved east side. See the map at the top and the link that provides details of the loop. But I kept it simple and just descended the way I had climbed.

However, after descending all the steep paved hairpins, I did take an alternate route through the lower valley on the far side of the river (see map) to finish the ride. While much of this is paved, there are a couple of unpaved kilometres. Generally very nice, but there is a short downhill stretch that I would describe as “formerly a road” that I walked. But it’s a fun quiet alternative if you have thicker tires. 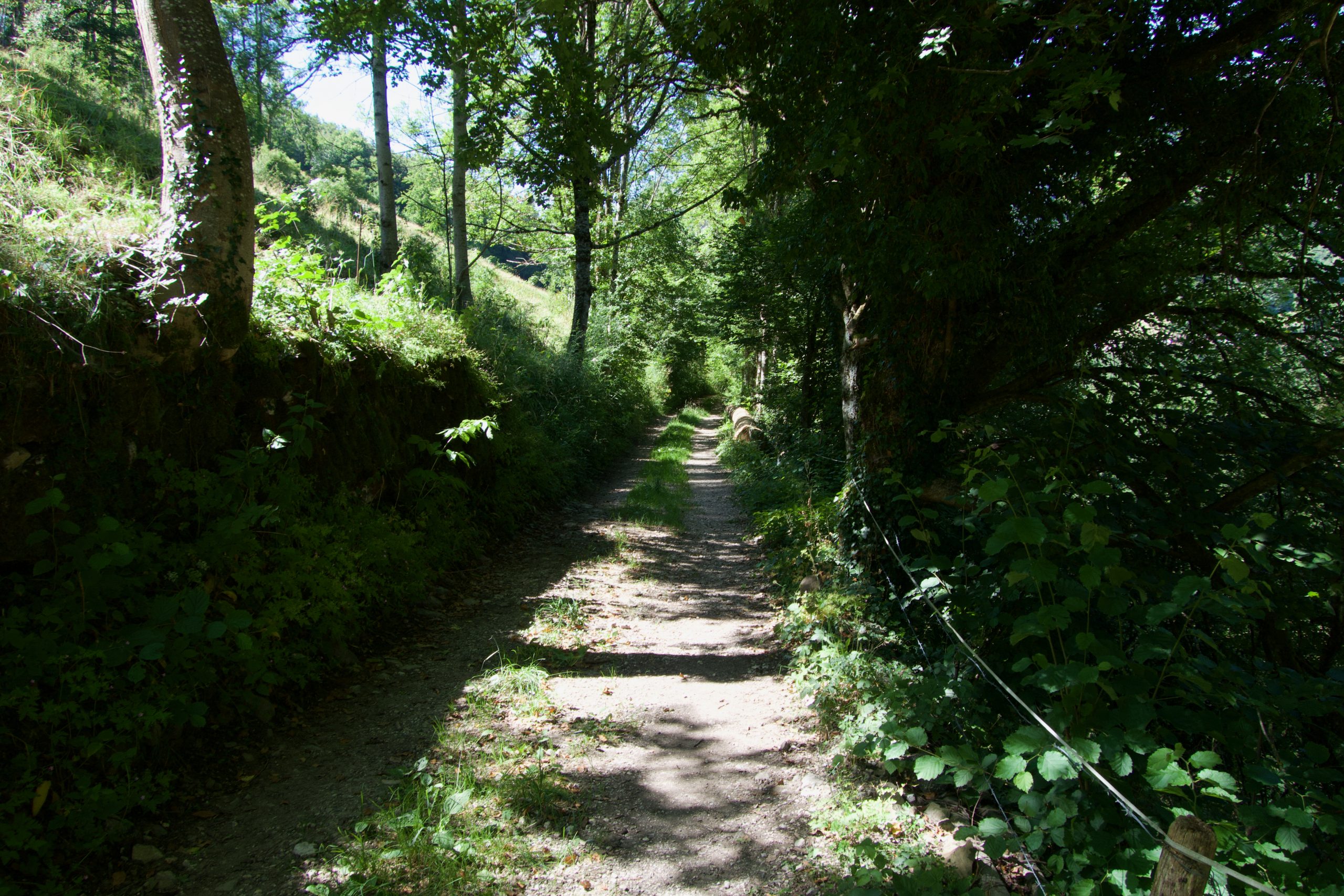 Woohoo! What a great ride. I love Plateau des Glières and it was fun to cycle a part of the Plateau that I mainly know on cross-country skis.