Trending
You are at:Home»Cycling»2008 Challenge Update 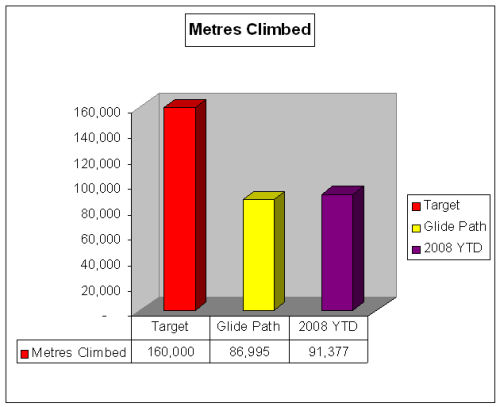 After a difficult spring with a few niggling injuries, I am now ahead of schedule for my 2008 goal of 160,000 metres of vertical ascent.

The highlight of the last several weeks has been the five mountain cyclosportives that I have completed (La Montagnarde, Time-Megeve, La Morzine Vallée d’Aulps, La Grand Bo, and La Marmotte). I am no racer but participating in these long, mountain events has been super motivation. And completing the epic La Marmotte still pleases me no end.

I am still the slowest descender ever born, but hey, it’s better than crashing (knock on wood).

A secondary 2008 goal was to lose 13 pounds by June 30th – and keep it off. As of today, I have lost 15 pounds. Now the hard part will be to avoid my annual fattening up late in the year.

Overall, two days before our 2008 Tour d’Enfer across the Alps I am feeling relatively slim and fit.

Some favorite photos so far in 2008